Wine and Dine Half Marathon Recap 2016 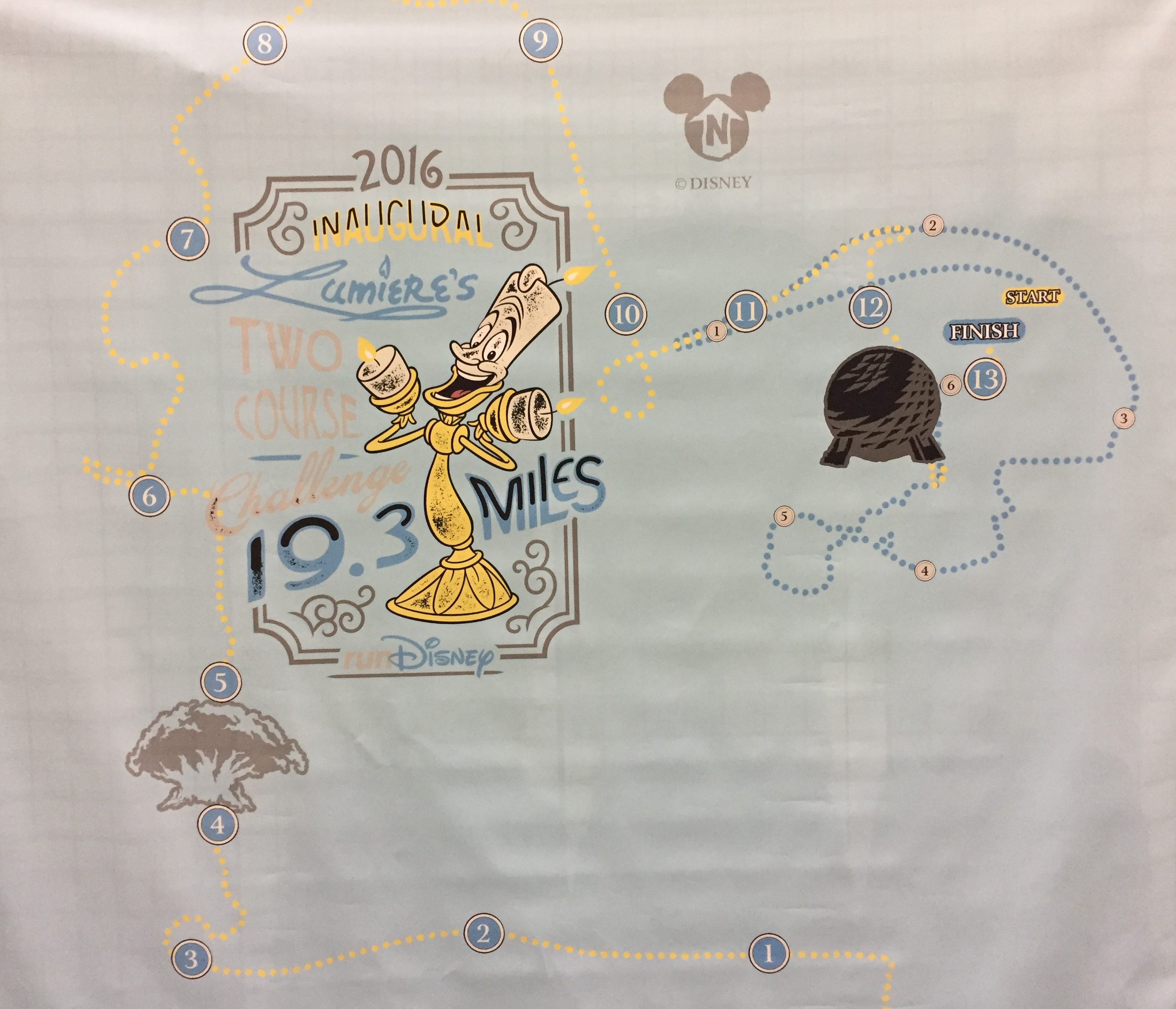 Wine and Dine Half Marathon Recap 2016

Where running dreams do come true. 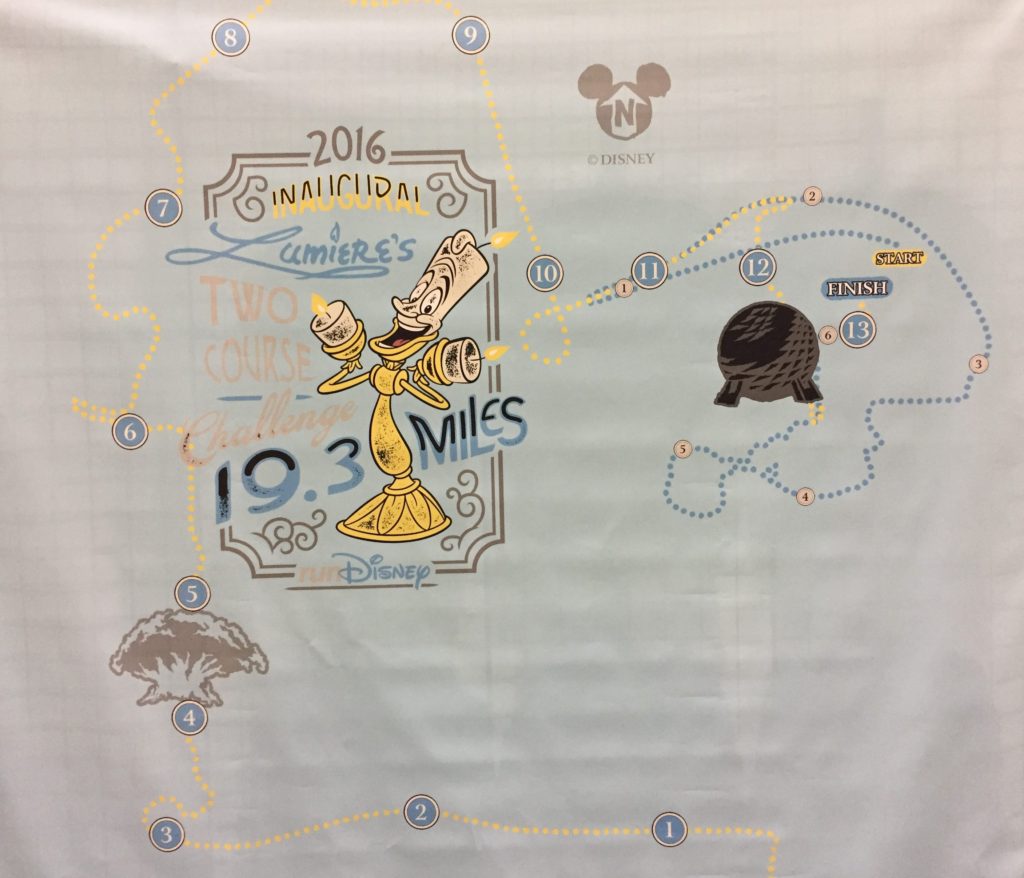 Here we are at the last East Coast race of the year. 13 races in the Disney World segment of the US challenge was ending after today. The race was different; now a morning race as opposed to the historical night run. The course was also vastly different because of construction for Toy Story Land/Star Wars Land. We would run to what amounted to the reverse backside of the marathon route.

I started the morning kissing the family good-bye and hopping on a bus with Beatrice. She’s an east coaster who went coast-to-coast with me at Tinkerbell in California. She’s also a great member of our running team.

We immediately jumped in line for some characters and I was finally able to knock Chef Goofy off my list. The lines were crazy long last year and got cut quick and we haven’t made it to any of the character meals where you can meet him like this yet. 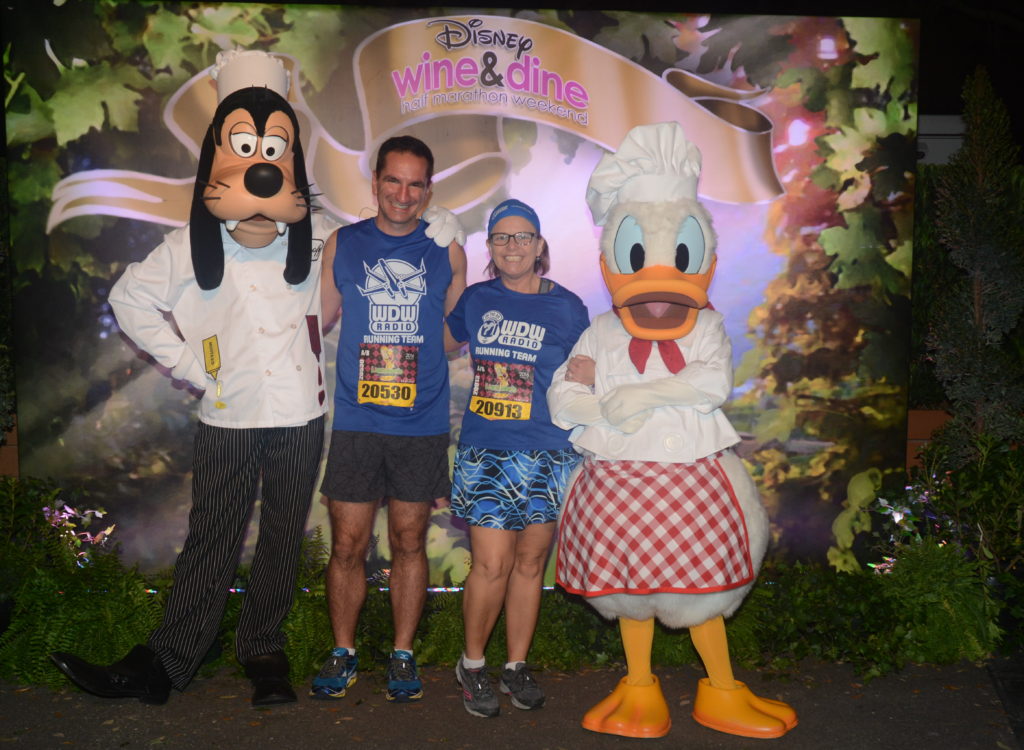 It was then off for the team picture. Deanna and Lou were out having a blast on the WDW E Ticket Cruise event so Jimmy and I pitched in to coordinate things for the weekend. 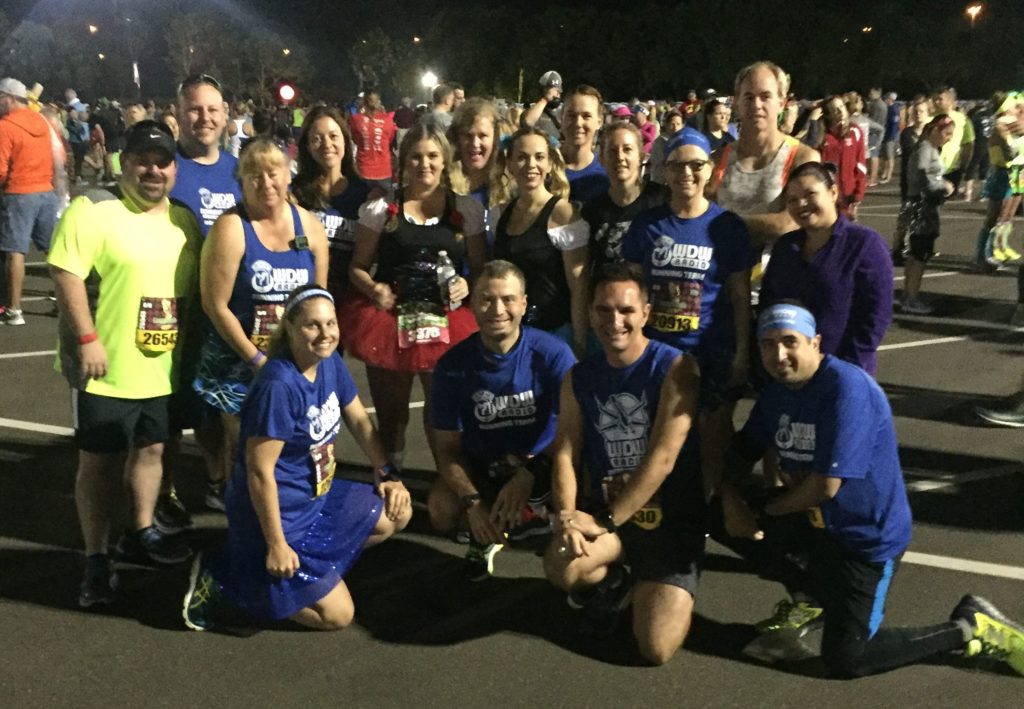 I love this team!

After time with the team, I headed off to the corral (They pulled the first few groups early to take their places) I needed to get there early anyway to see if it was possible to link up to the Galloways. Jeff had told me about some of the x factors so I wasn’t too hopeful, but I was going to try. 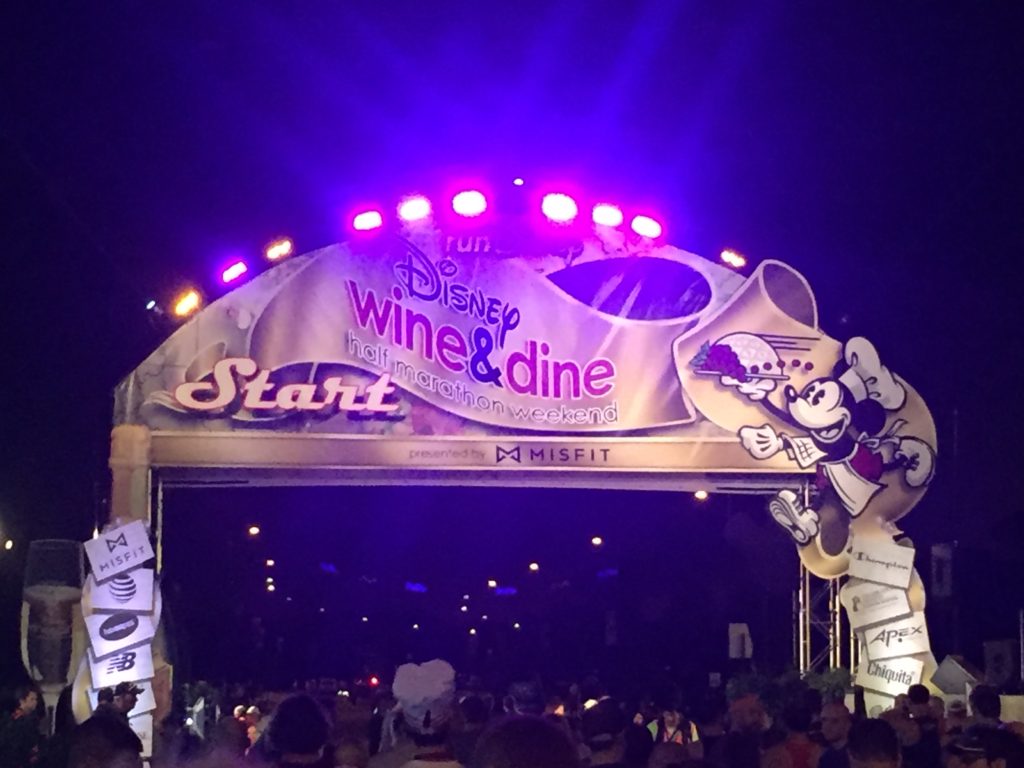 After giving his talk to the crowd, they stuck Jeff and Barb in the corral before me right before they went off. Then they took off…… Now there was an added challenge, catch up to and find an Olympian in the hundreds of people that left before me.

I only had 120 seconds to decide what to do and my brain was playing the whole, “Be stupid/don’t be stupid” game. As you know by now I usually choose “Be stupid” in these scenarios.

The fireworks go off and I’m running in full stupid mode. A sub 8 minute mile for a half marathon.

I feel like I’m probably making good progress towards them when I make another “stupid” move. I decide I’m stopping for characters too?!? I mean it’s the country bears so why not. 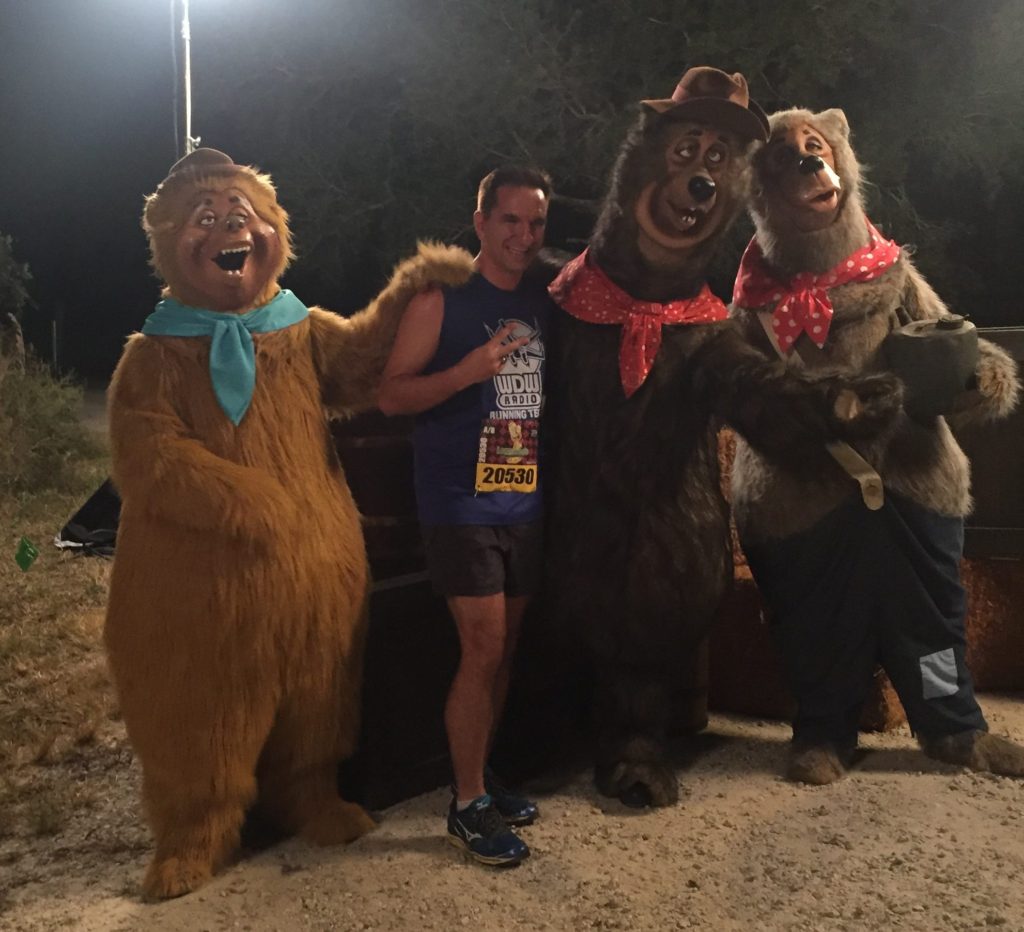 Right before mile two I see them…. the Galloways doing their thing tearing up the course. I pull up beside Jeff and I’m genuinely in shock that we linked up. (I think he was surprised too.) After linking up with them I tell them I’m not stopping for characters unless there are some that I don’t have. I didn’t want to risk getting separated after putting so much work on the front end. 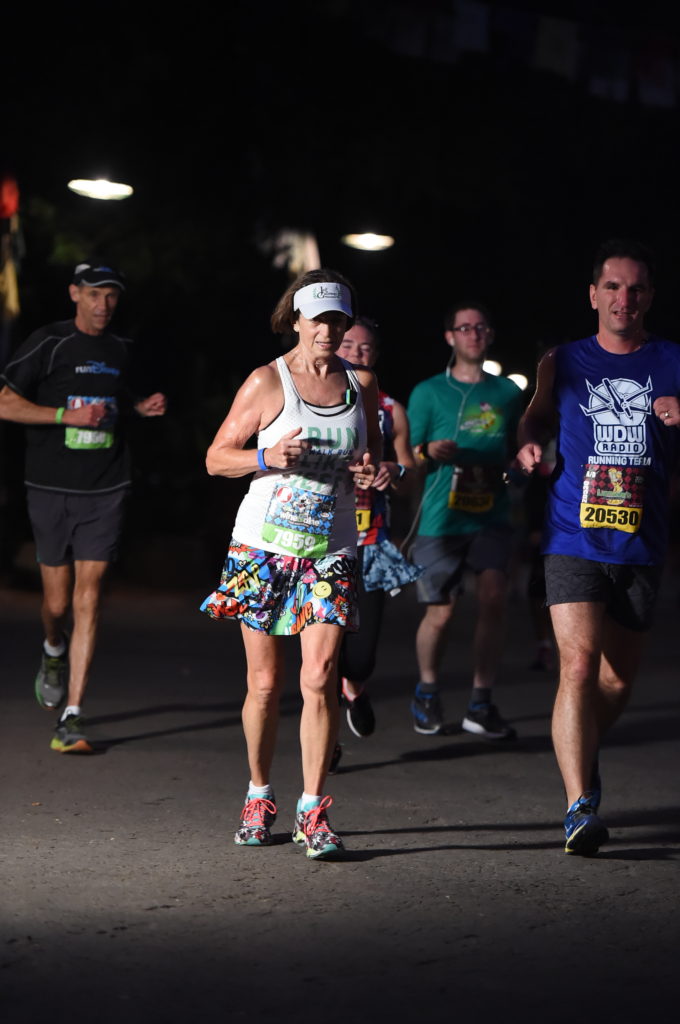 Barb was our pacer and I spent most of the time running alongside her. She’s hilarious and such a blast to run with. Jeff and I had fun making jokes of how beautiful the sunrise was over the water treatment plant. It was picture perfect exept for the location we were running through at the time.

On the back side of Animal Kingdom, I see the first characters that I have not gotten yet. Chip and Dale in a cool Western overlay. Luckily there wasn’t a line, so it only took me a couple of minutes to catch back up. 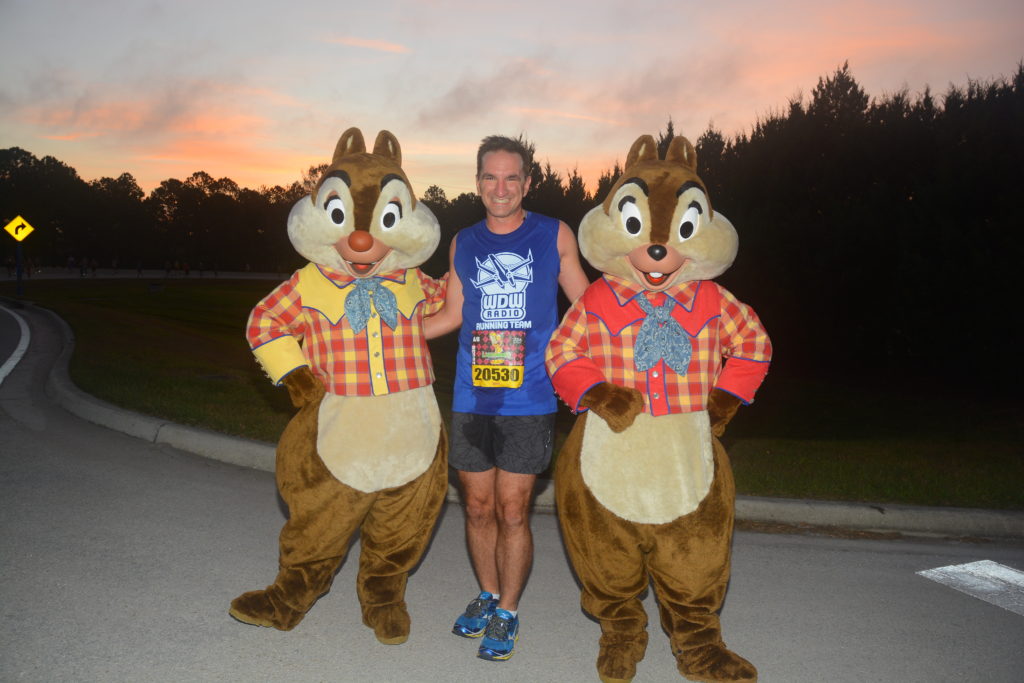 Many of my Disney and running friends know about my obsession with trying to find Darkwing Duck. He was the whole reason that I started this crazy journey in the first place. I barely missed him during the marathon weekend because of rain. The people that got out later after the rain stopped got him, which only put salt in the Darkwing wound. A friend told me that this was going to be my shot today….sure enough he was out there! 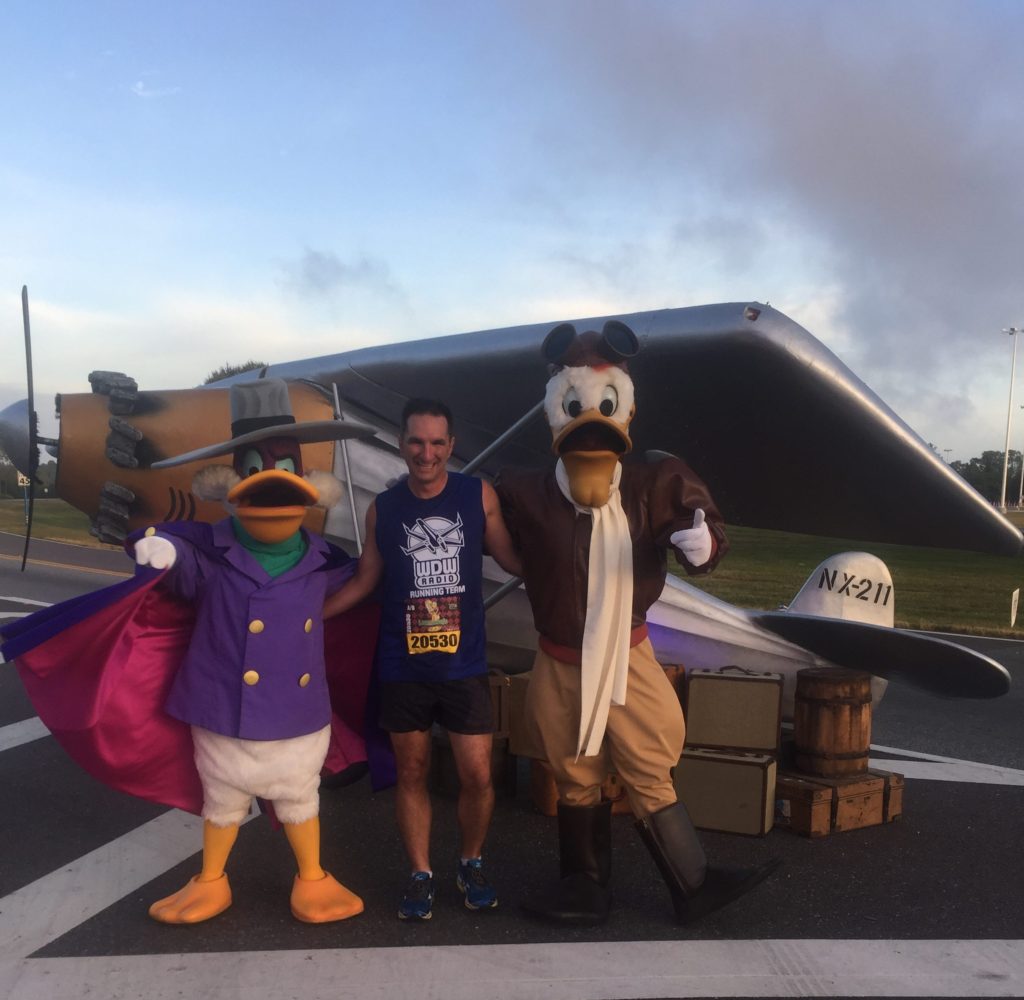 I get hyped up and tell the Galloways that I’ve got to stop for this one. As soon as I get there they go on break. Normally not a big deal, but I can feel the Galloways’ feet pattering further and further away with each moment. After a few minutes Launch Pad and Darkwing make it back out and I finally can check him off my top 10 list.

The problem now is that I’m a good 5 minutes behind. Time to get stupid and try to catch an Olympian for the second time today. The adrenaline from the characters and the task of catching them put me back in a sub 8 mile. It takes a mile to catch them and it was thankfully right before a water station.

We had a great time knocking off the rest of the distance to Epcot. There was another rare stop just inside the gate with no line, but there also wasn’t much distance to catch up if I got behind again. That’s why I look like I’m getting ready to shove them both down and sprint away in the picture below….because I am. 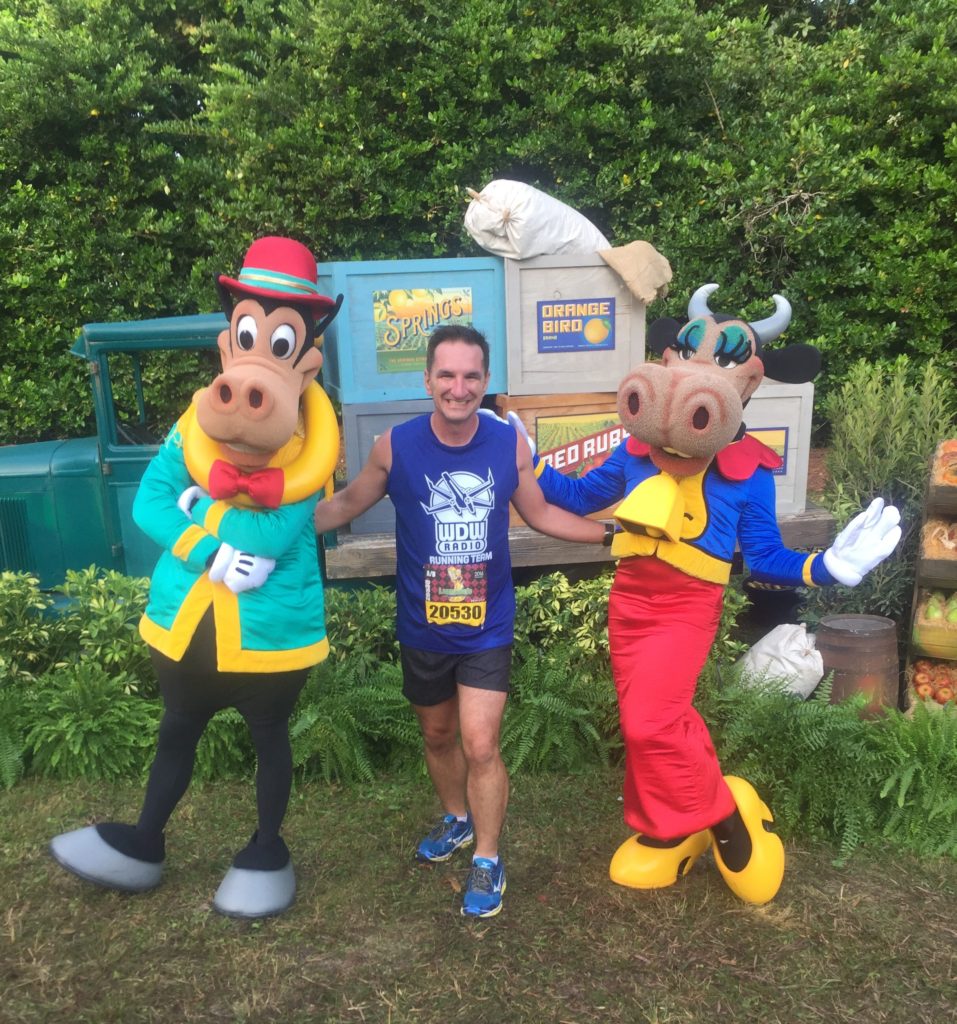 The short run in Epcot was great. The park was still closed so it was all cast members cheering us in the final stage. There were also several good characters stuck in here as well. Scrooge Mcduck and Vacation Genie. 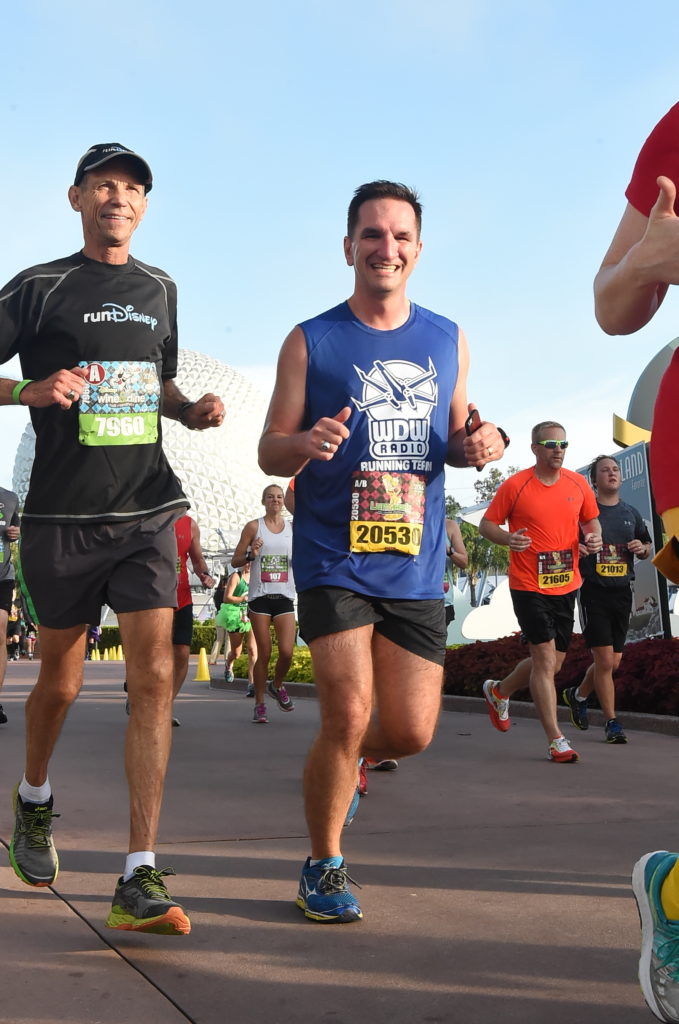 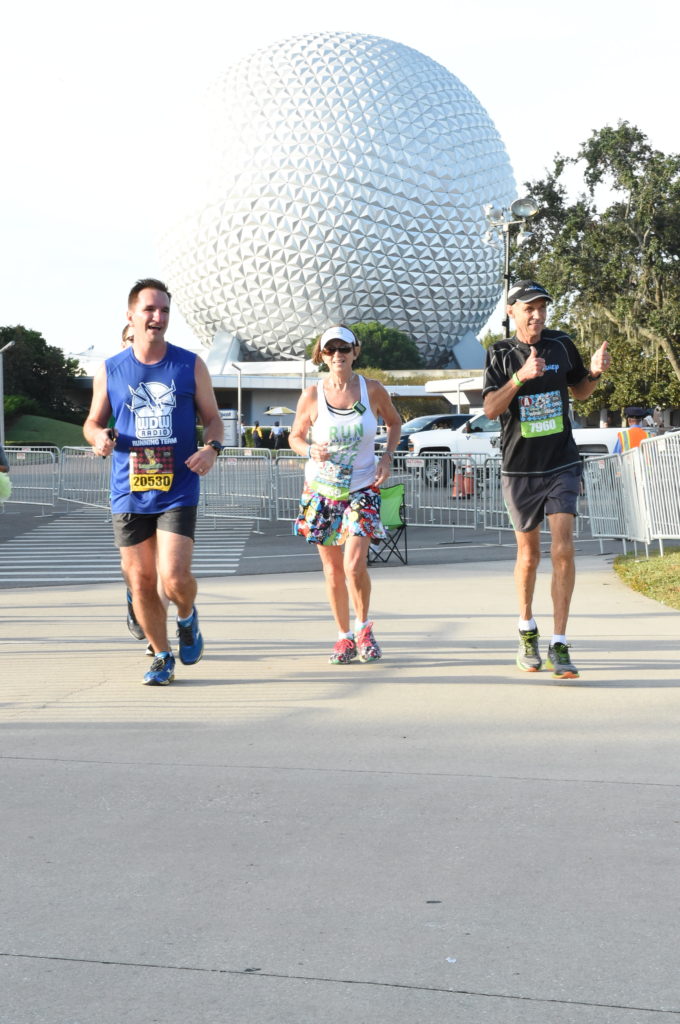 We saw Sharon and the kids a little before the finish line, I was so excited! 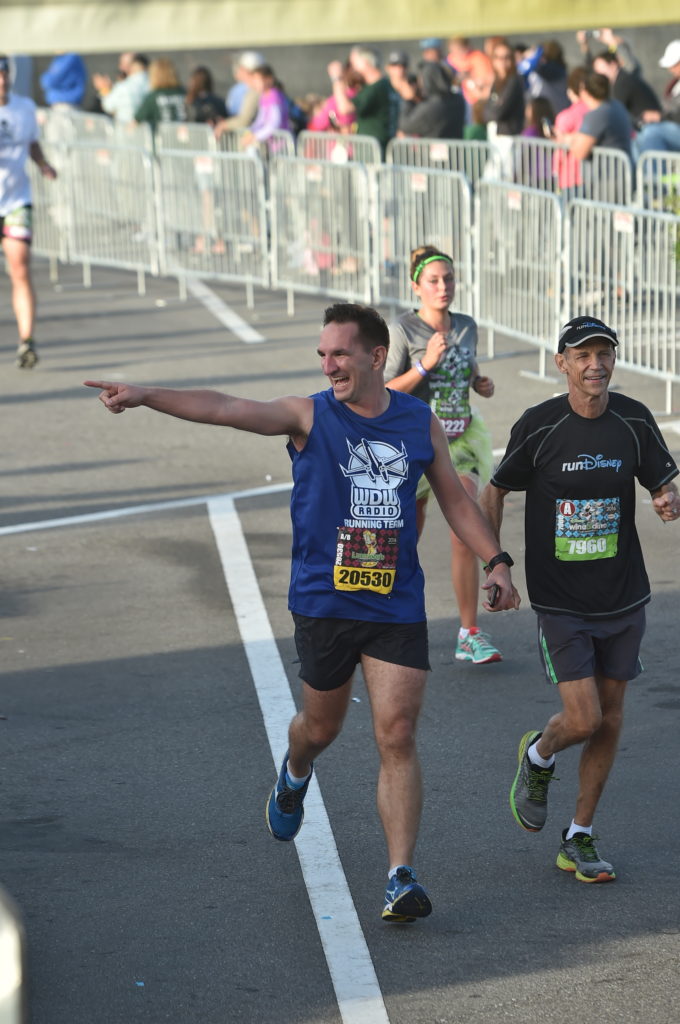 We even got some shout outs from Carissa at the finish! 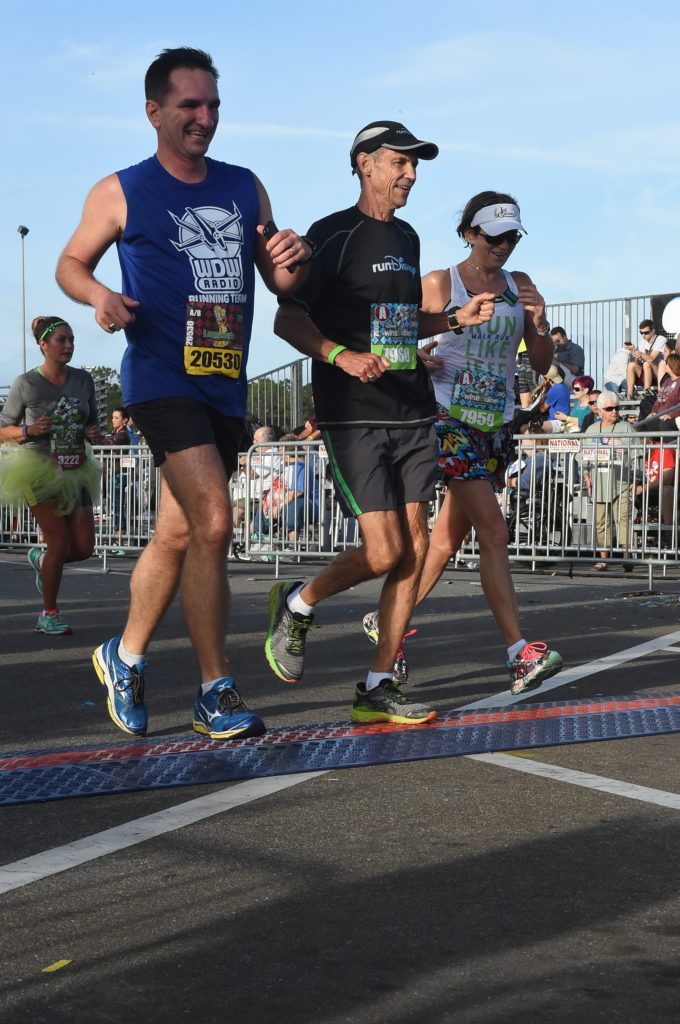 That was it. It was finished! I couldn’t have wished for a better run. The weather was great and I had the honor to run the race with the Galloways. I even picked up a few great characters along the way. There was no way to top this race right? I was going to find out soon enough. It was time to go home, wash clothes and catch a flight to California. We do this all again in the last West Coast series of the year that starts in just 5 days. 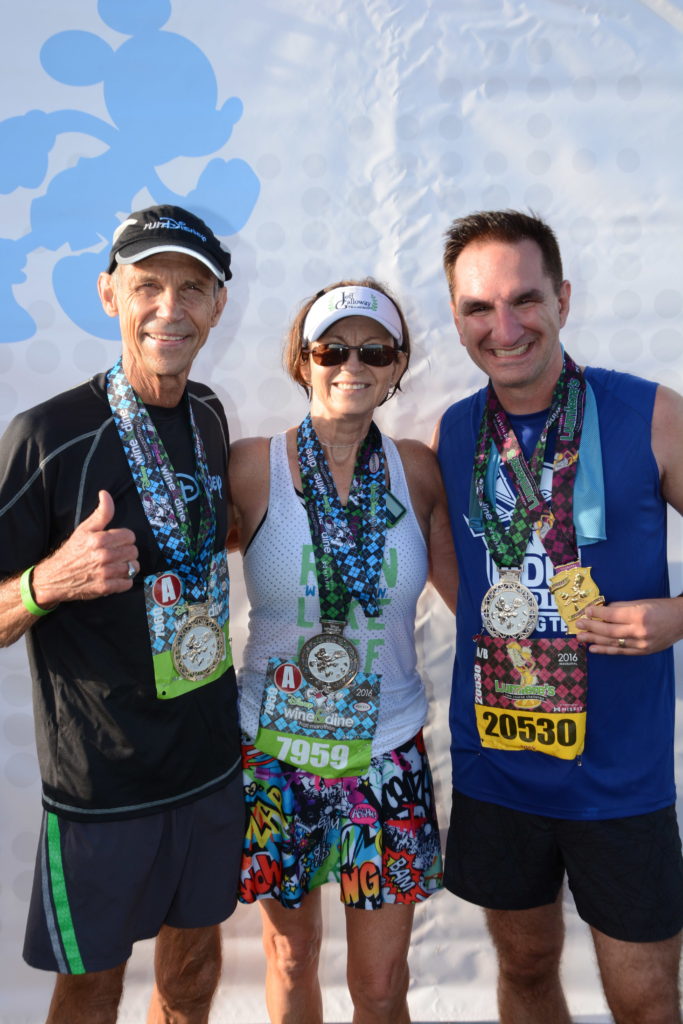 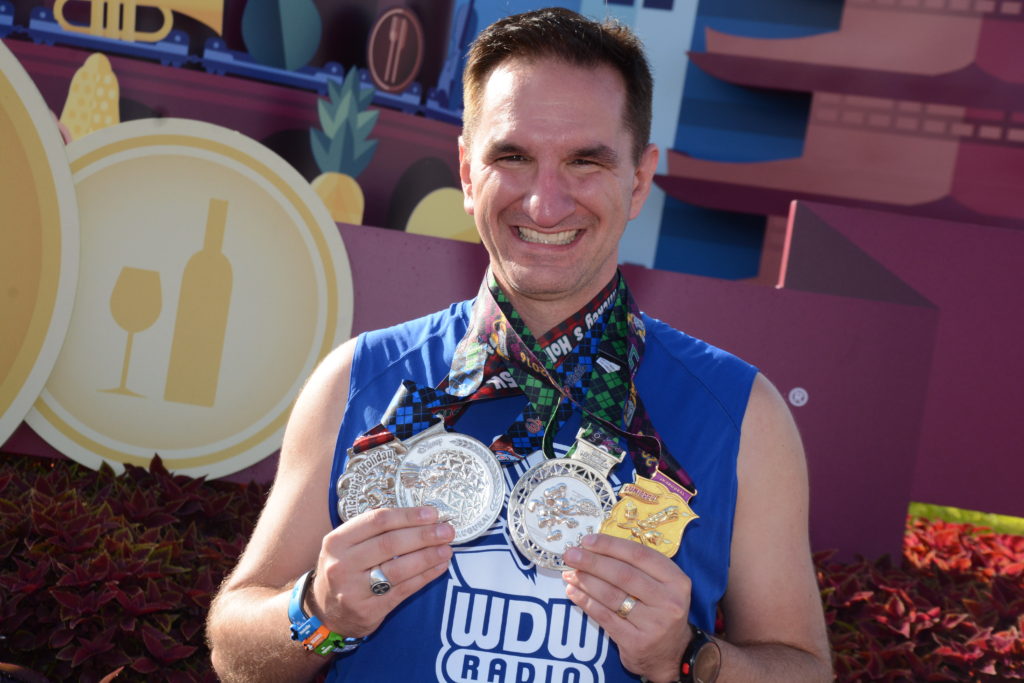 UP NEXT: AVENGERS EXPO AND 5K RECAP!