Wine and Dine Half Marathon 2015 Recap 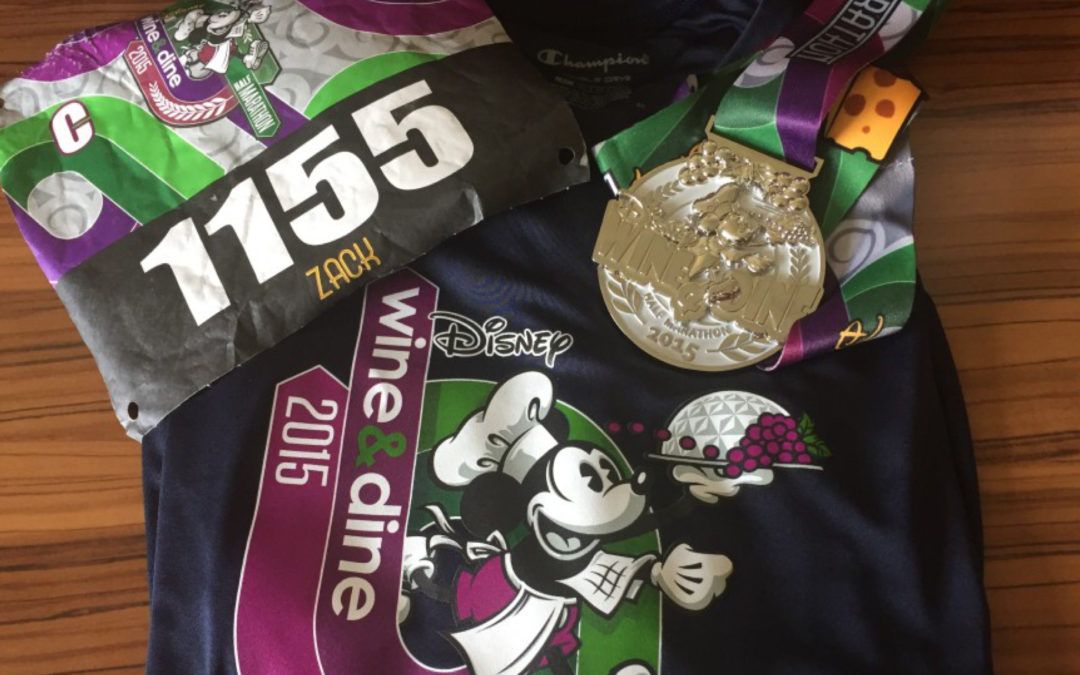 Wine and Dine Half Marathon 2015

The race that was, wasn’t, then back on, semi-half marathon.

What a day! Our day started in the Animal Kingdom parking lot at 4.45am and we completed the 5K that morning. We left there and went straight over to the ESPN center for Beth’s kids race at 11.00am and then went to Epcot at 6pm to get ready for the half marathon that night. Lesson #3 of the weekend: Don’t do a kids race and both the regular races in the same day. It was just too much going on that day. Next year if Beth wants to do a race, we will do the 5k together. (Which is what we are doing for the princess half marathon weekend.) 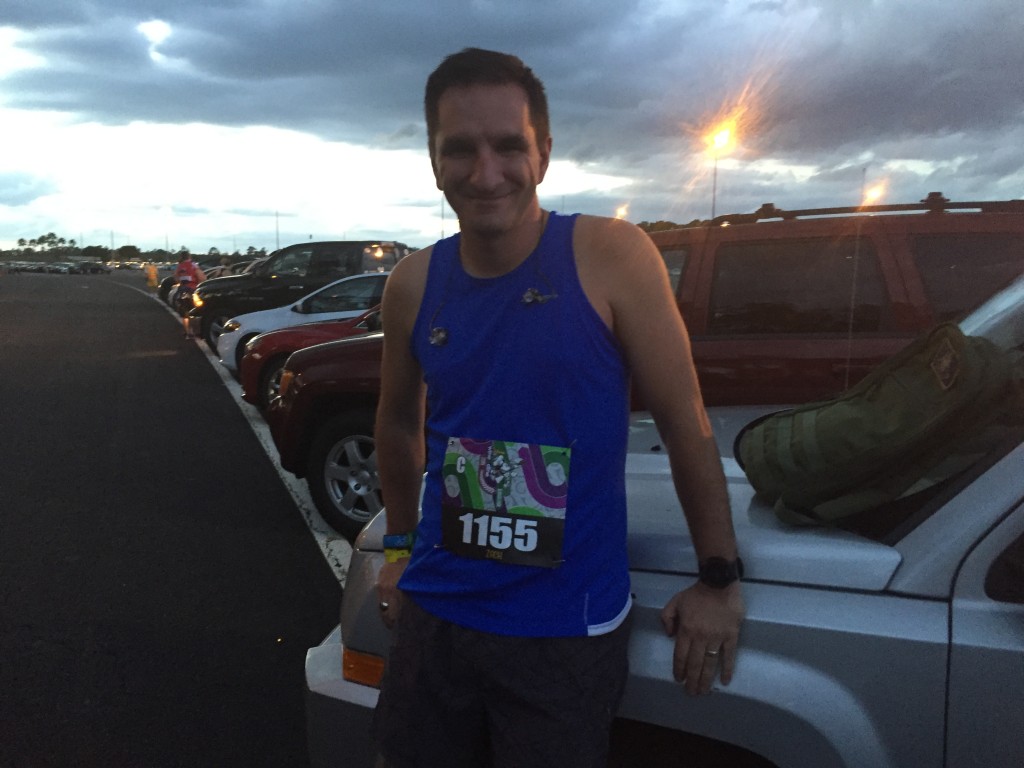 We were again way early for the event. We weren’t first this time, but there were only about 12 people there when we arrived.  The family stayed around for a little bit before heading on in to Epcot to enjoy the park.  I got to sit with a nice lady on the shuttle who was just getting back in to running. She was anxious about the race because she was competitive and didn’t want to do bad. (I know the feeling!) I also sat behind what I thought had to be the most interesting guy around. He was talking about his private birthday party at Disney that included a character from each park in the world and had unique pins made just for the party. Crazy!

I was already trying to learn from the 5k race that morning. I knew there had to a character meet before the race, so I hustled over to the staging area. Instead of one though, there were six! Each had its own line, so I was able to get through three before the crowds really got there. By the time I got to the forth, the lines were almost a football field length long. 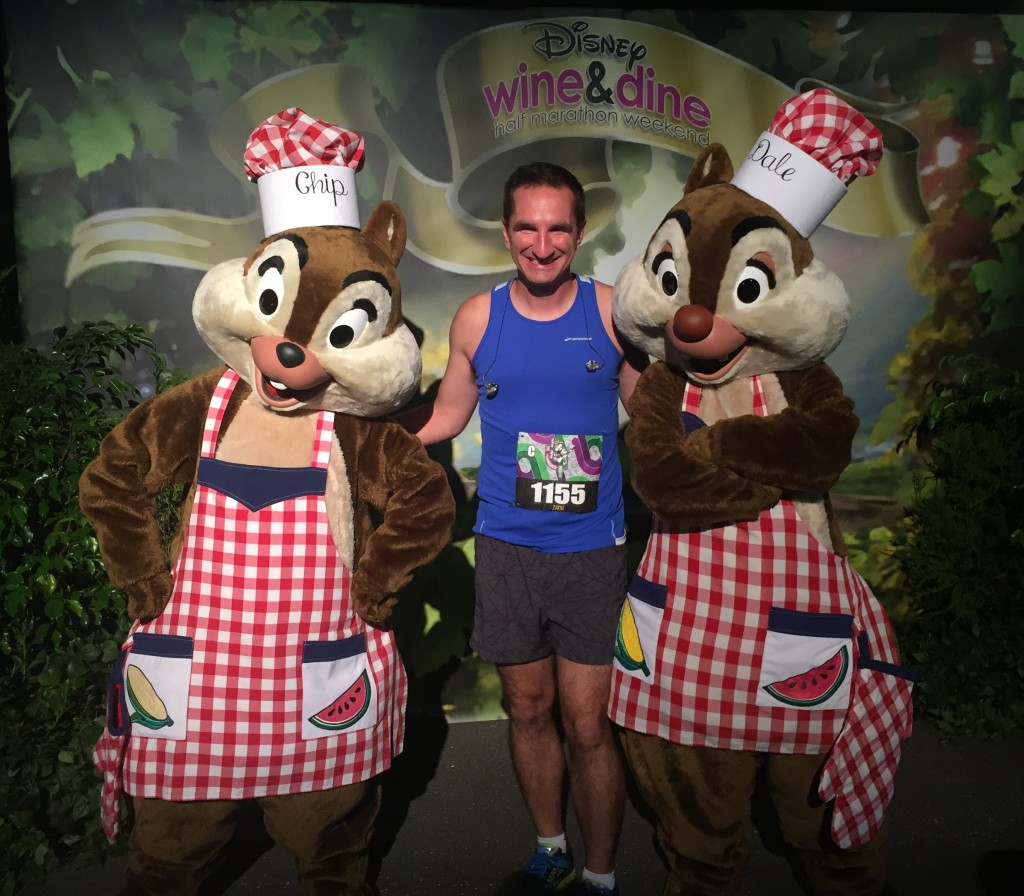 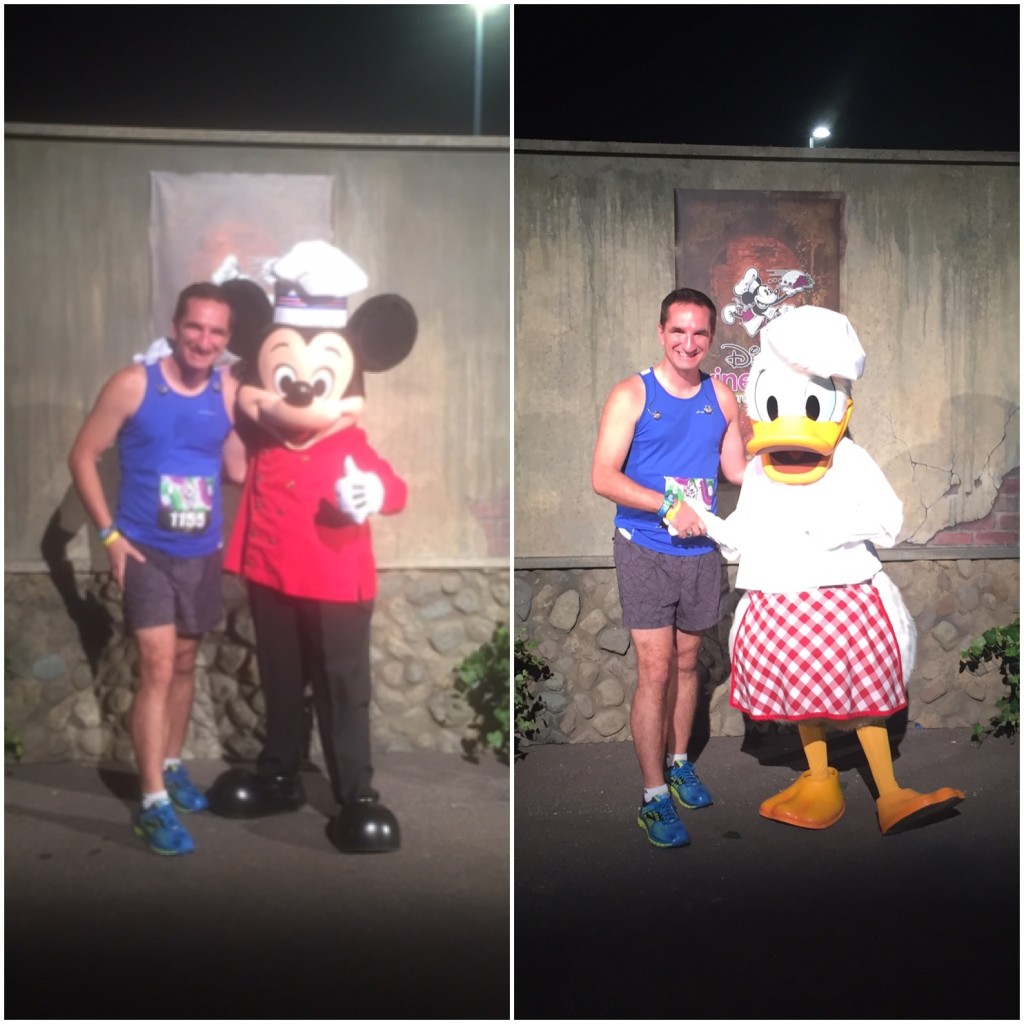 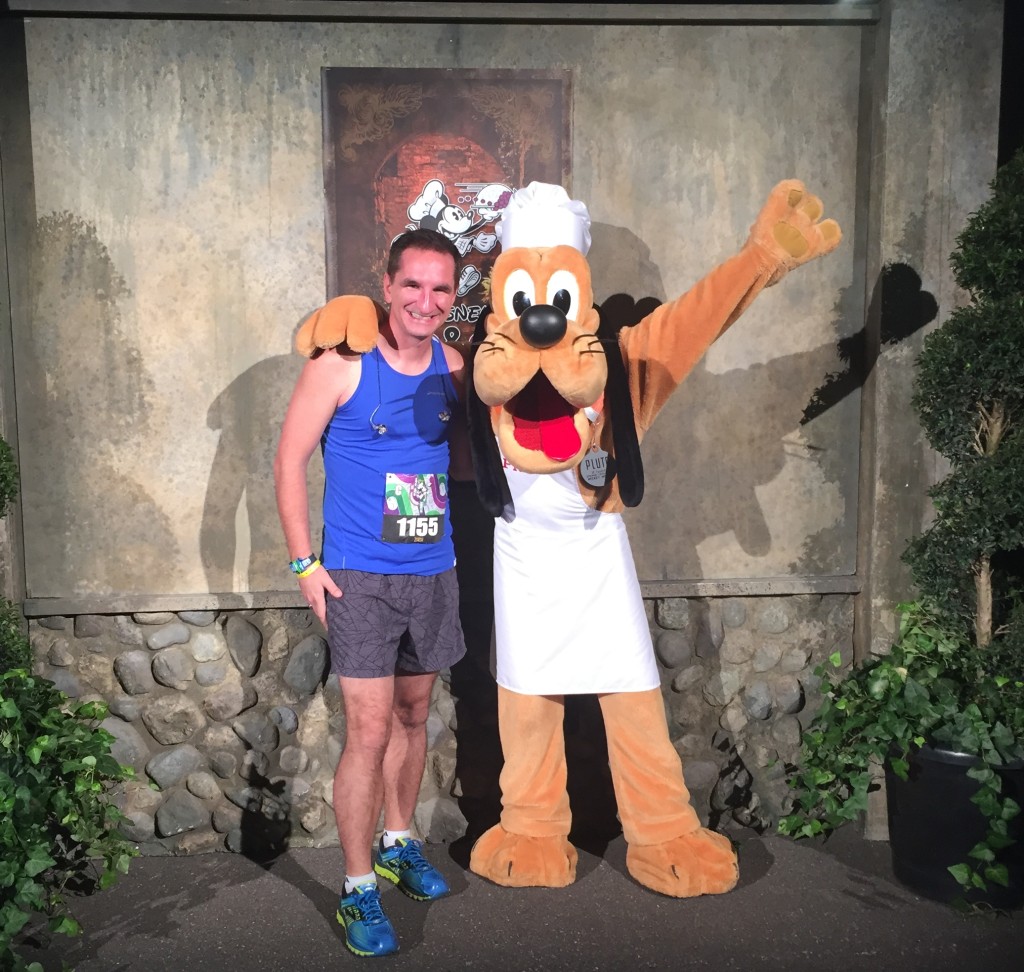 It took about 2 minutes each to get the first three and 40 minutes to get the fourth one. I opted not to go for Minnie or Goofy since I was supposed to meet up with the WDW Radio Running Team for our team picture. After hanging out with the group for a bit, it was time to go to our corrals. It had been lightning in the distance for about an hour at that point but nothing close and you could not hear thunder. About the time we get going into our corrals we hear the PA announcement, “We are evacuating the course. Please head to shelter in the ESPN pavilion.” 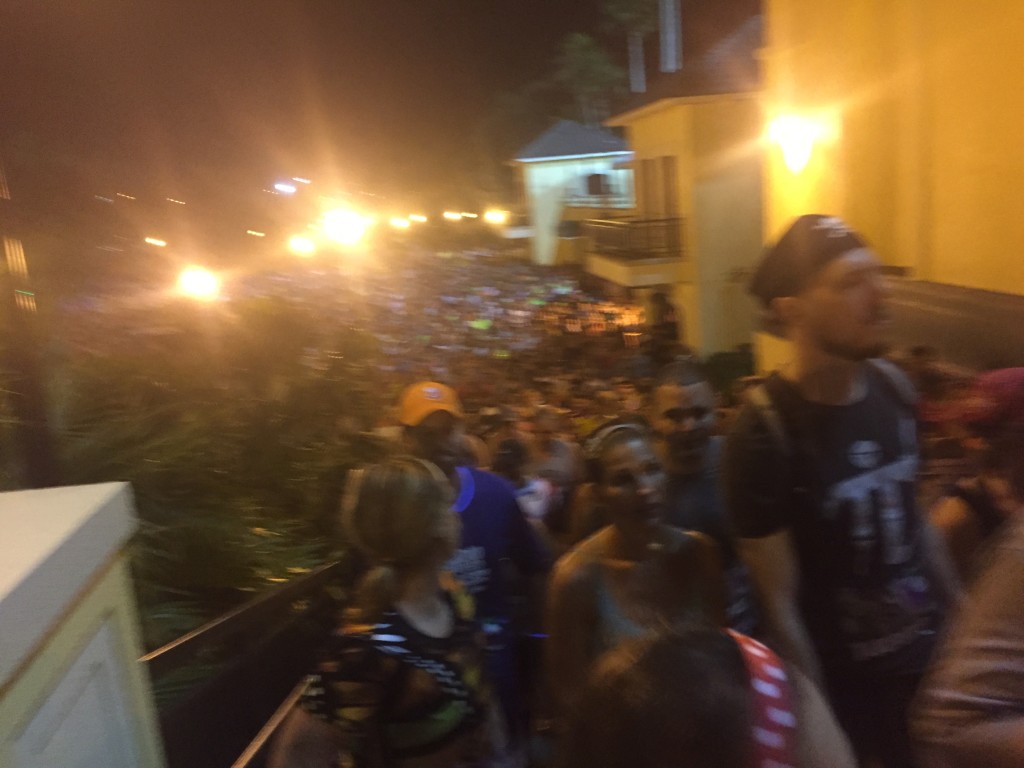 Its blurry, but that’s the sea of people heading back for shelter. There was also that many people out in front of us!

It was organized chaos. Our group had separated to go to the corrals and now we were trying to swim in the sea of people to reconnect. We found everybody and headed to the pavilion.  Once inside we hung out for right at an hour before they put us back out. It was funny to see people posting on instagram/twitter/facebook and you could spot our sea of blue out in every picture.

This was the moment I fully grasped Lesson #4: Join a running team. I have been blessed to represent some cool places like LifeWay and Camp Gladiator in the past. Even then, I typically am doing my thing solo at events. I do enjoy meeting people on the course and sharing that experience with them, but I have never been on a true running team before. What Lou, Deanna, Jimmy and bunch of others have built is really awesome. I would have been fine that night by myself, but they made it enjoyable. I’m looking forward to running with them this year. 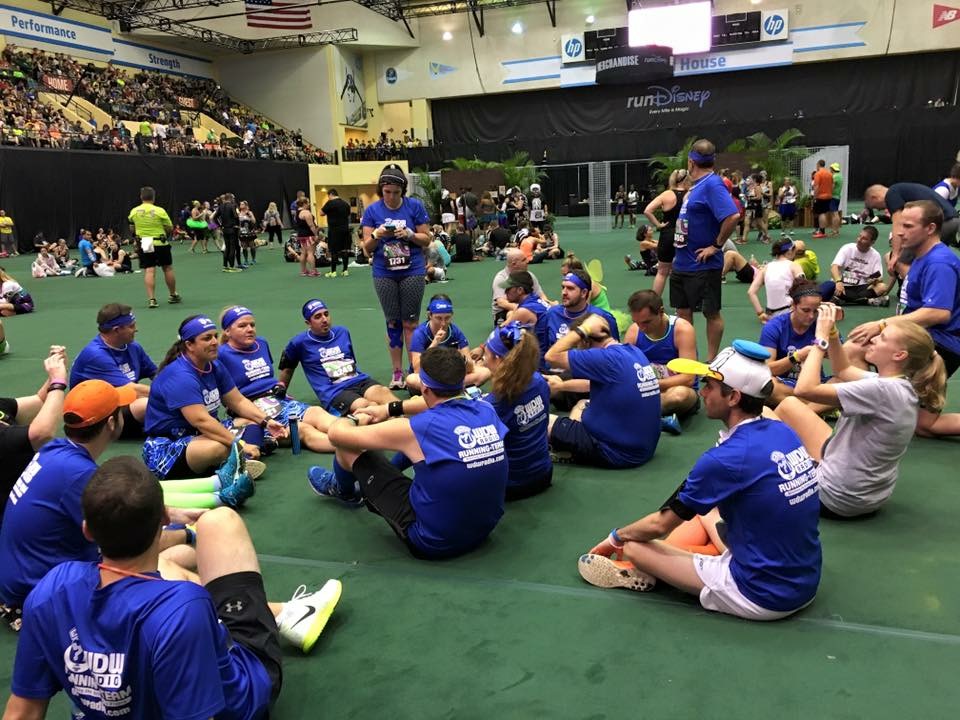 Finally they bring us out and it’s time to go. It was a little bit chaotic getting back to the course and along the way, we got news that they were cutting the Animal Kingdom section of the course. I was actually glad since we were running so behind….which brings me to my next lesson. 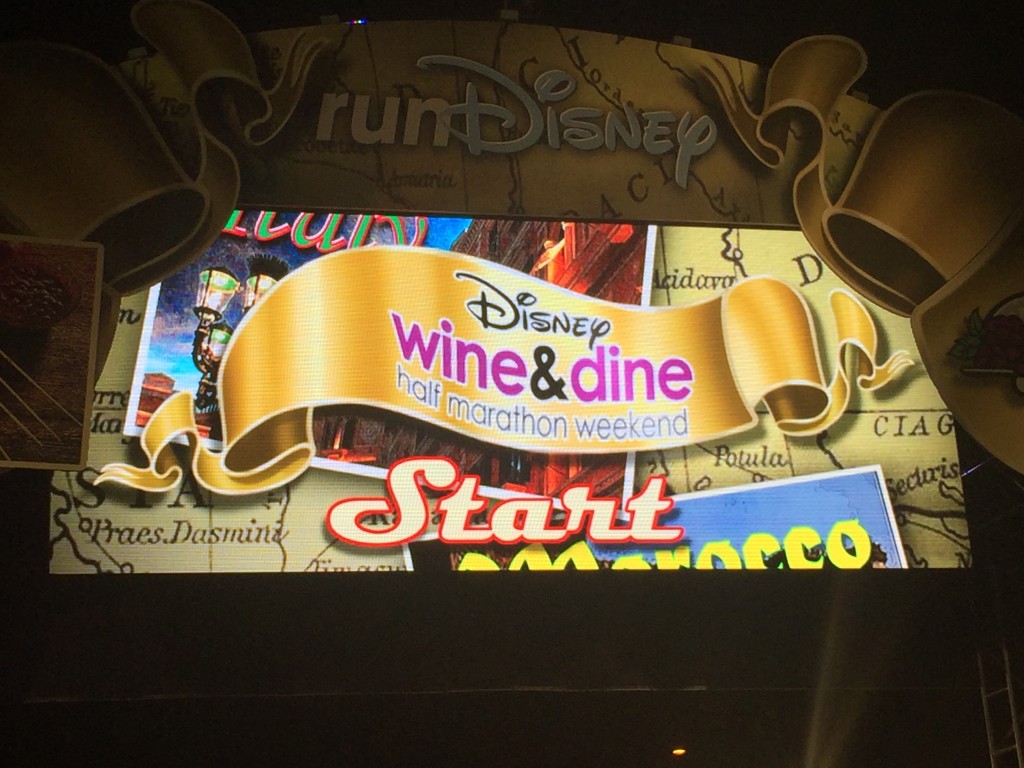 I was updating Sharon on the conditions and told her I was going to try to haul to make up time since it was so late. (I started after 11pm) My mind was in a different mode now and telling me, “Your knees can recover later. Haul to get to the kids and don’t worry about the characters. They will be there next time.” Meanwhile my rational side actually agrees for once and thinks that I could just treat it like a regular race. So several minutes pass and off we go!

Things are going fine at first. Its hot. Its muggy. We are an hour late. My knees already hurt. I’m running too fast….again.  I really did feel like things were going good though. We rounded the first corner and I was getting ready to down shift in to about a minute slower per mile pace….and then I saw him. Wendell.  Who the heck is Wendell?!? Yeah, he’s one of those country bears and he’s wearing his regular outfit. (I’ve caught him twice in Christmas gear.) So I decide that I’ll just pull over for this one character since there isn’t a line. 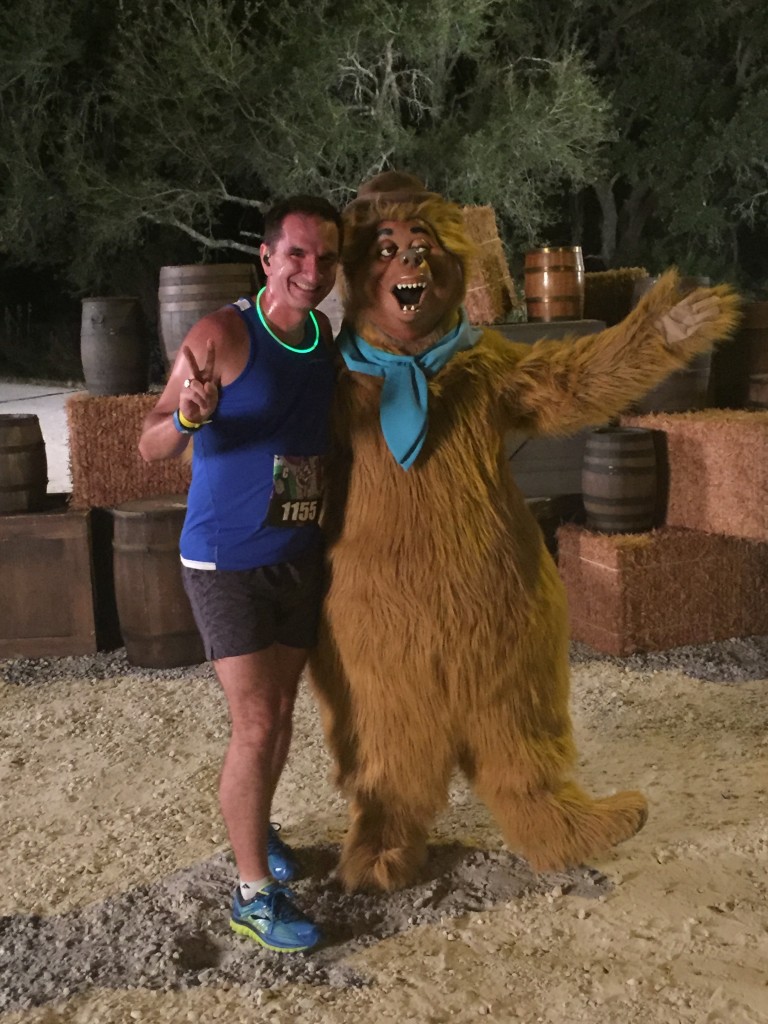 No worries my rational side thinks. Meanwhile my other side is telling me if I just pick up the pace a little I can get a few more. Well you know that “a few more” turns in to all but one. I had fallen into a trap of my own making again. I was running too fast and trying to get all of the characters. 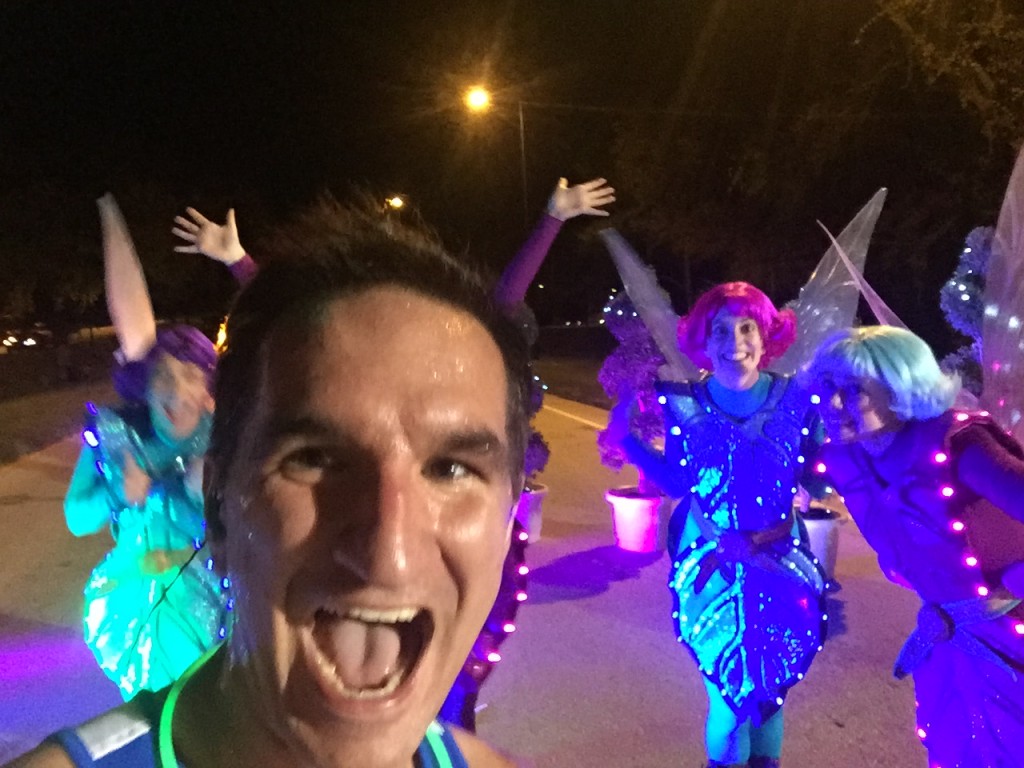 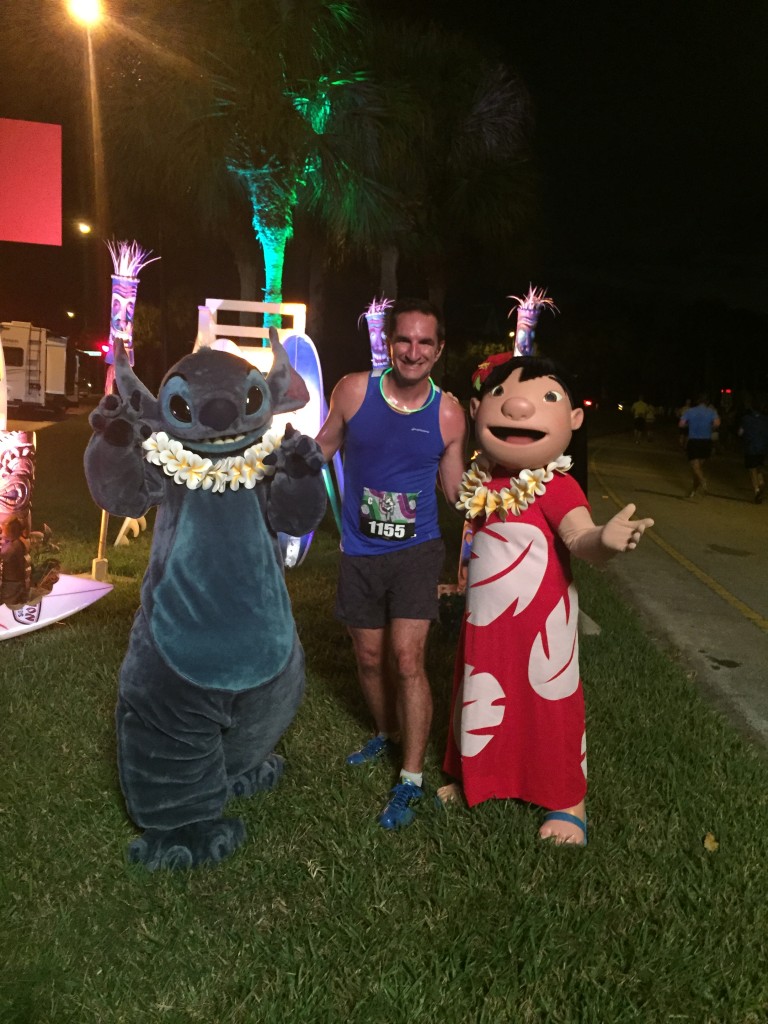 I couldn’t pass up Lilo!

There were still several fun things out on the shorter course. I loved the fairies and the green army man was out famously daring anyone to walk while they were in front of him. A couple of DJs later, I find Lilo and Stitch not far from Hollywood Studios. You are going to pay $50 a head (character meal) if you want a chance to meet Lilo on a normal basis, so I had to stop. 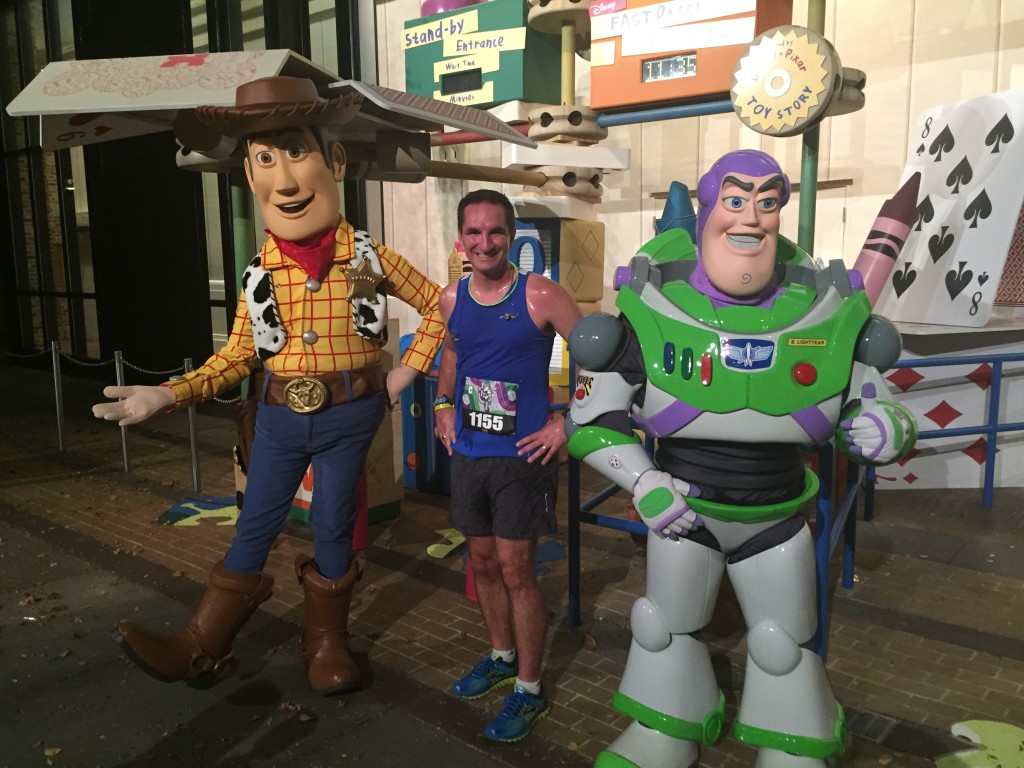 A couple of guys on the running team gave me a heads up on all the switchbacks and hidden turnarounds in Hollywood Studios. They were right of course. It seemed to go on for a long time, but I really liked seeing some of the old back lot tour areas that you never get to go to anymore. It’s also likely to all be gone next year as they expand out the park. The only character stop I didn’t do was the Incredibles. They had a cool backdrop but we’ve met them a ton, so I kept pushing through.

I loved seeing the Christmas lights with just the runners in there. This was the one area I slowed down to a walk and took a couple of pictures. We came as a family the night before looking for the black cat to no avail. I was able to find him with no problems during the race! The last two years, its always been super packed. That night I could spread out as much as I wanted to! 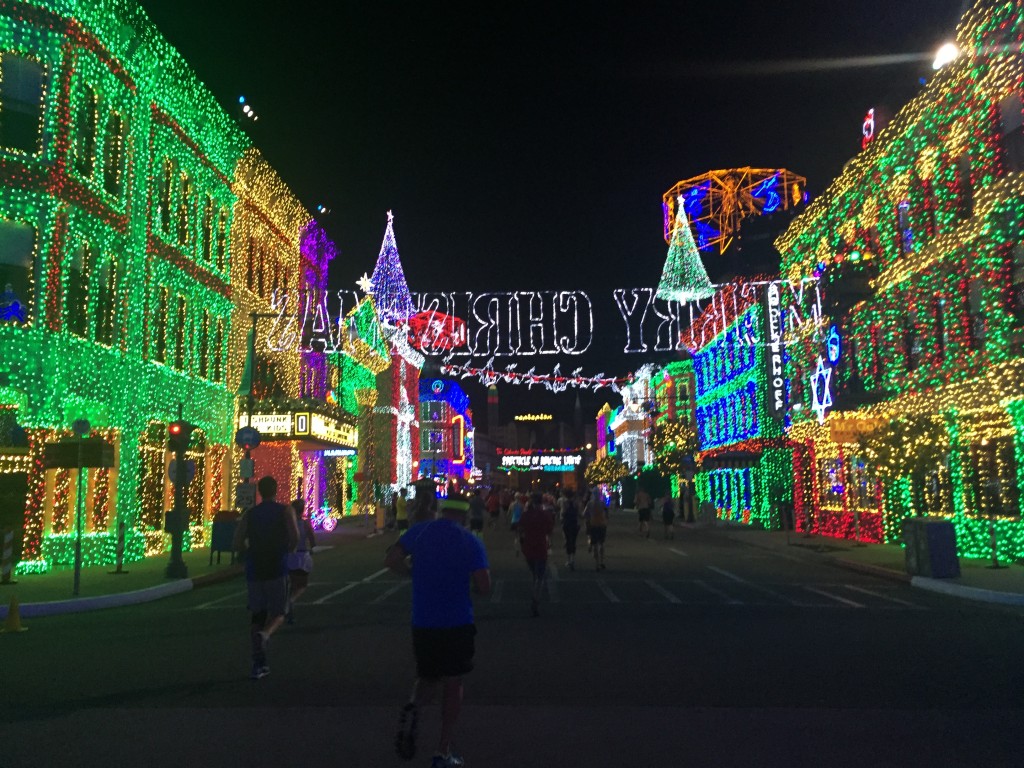 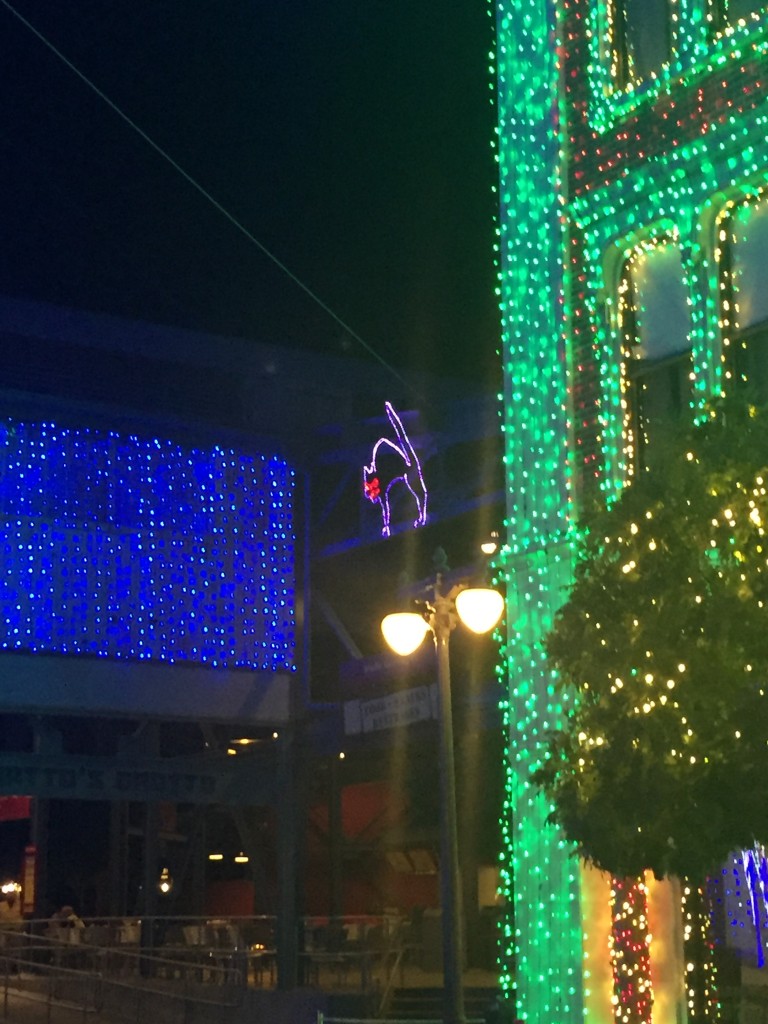 After Hollywood Studios there wasn’t much distance left. I was in full on pain mode at this point and just tried to buckle down and get through it. The course went down through some of the resort areas that I have never been through before. It was fun to see guests at the hotels out holding up signs and cheering people on.

Soon, it turned in to the back of Epcot where there were these giant almost Christmas light looking puppets. They were really neat! Another turn later and we are officially in the park and people are everywhere cheering us on. I really turn on my last bit of kick and push it hard to the finish. 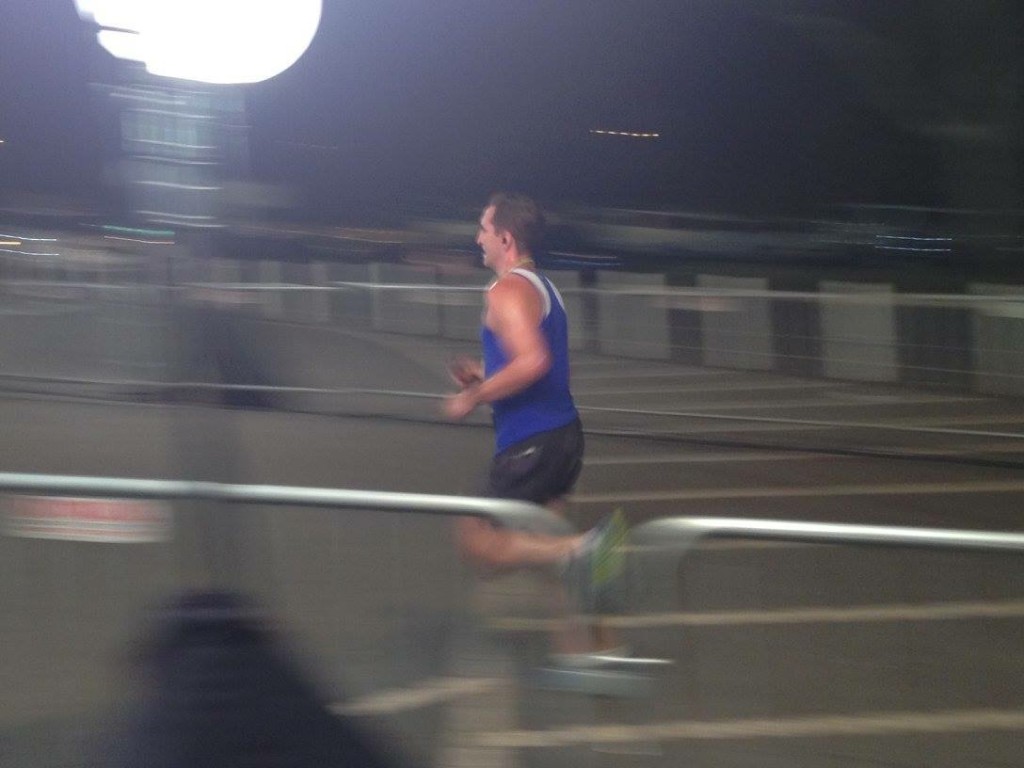 I got an unexpected surprise about 10 seconds after hearing my name called out at the finish line. I hear Jeff Galloway cross the line. I beat an Olympian! Granted he has tacked on a couple of years since then, and was running with his wife, and probably walked most of it…..but hey, I’ll take the win. 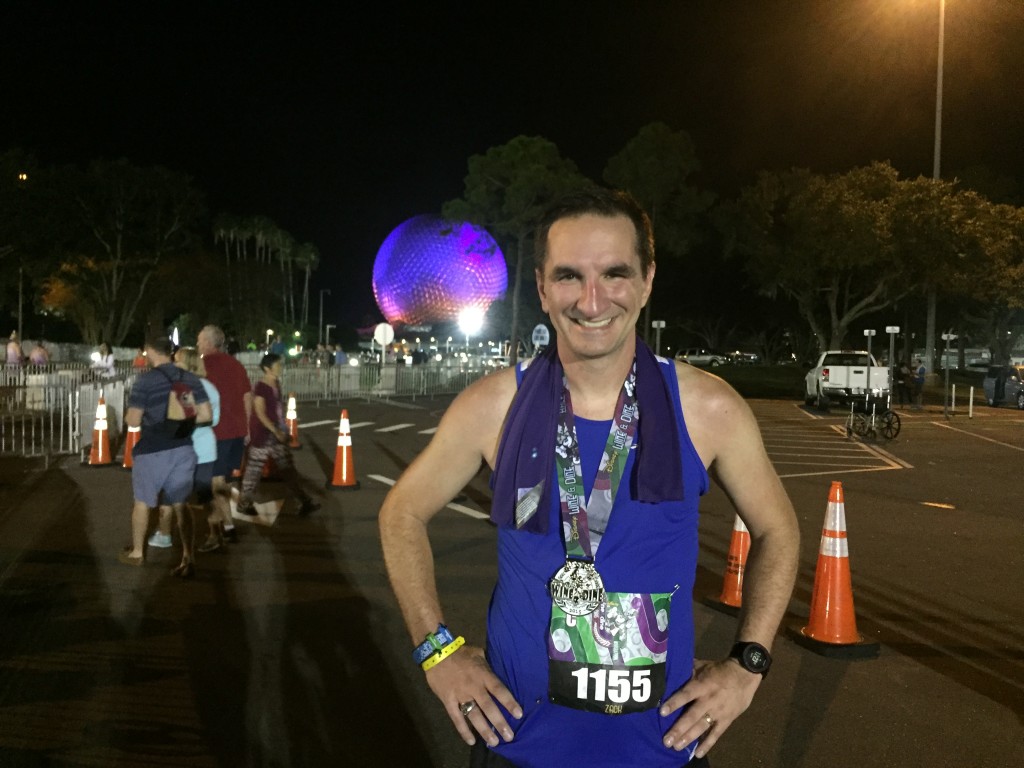 It might not show, but my knees were killing me at the end. We decided to skip the after party in the park and head on back to the hotel. We made it back a little after 1AM. It’s an unique race that I would recommend! 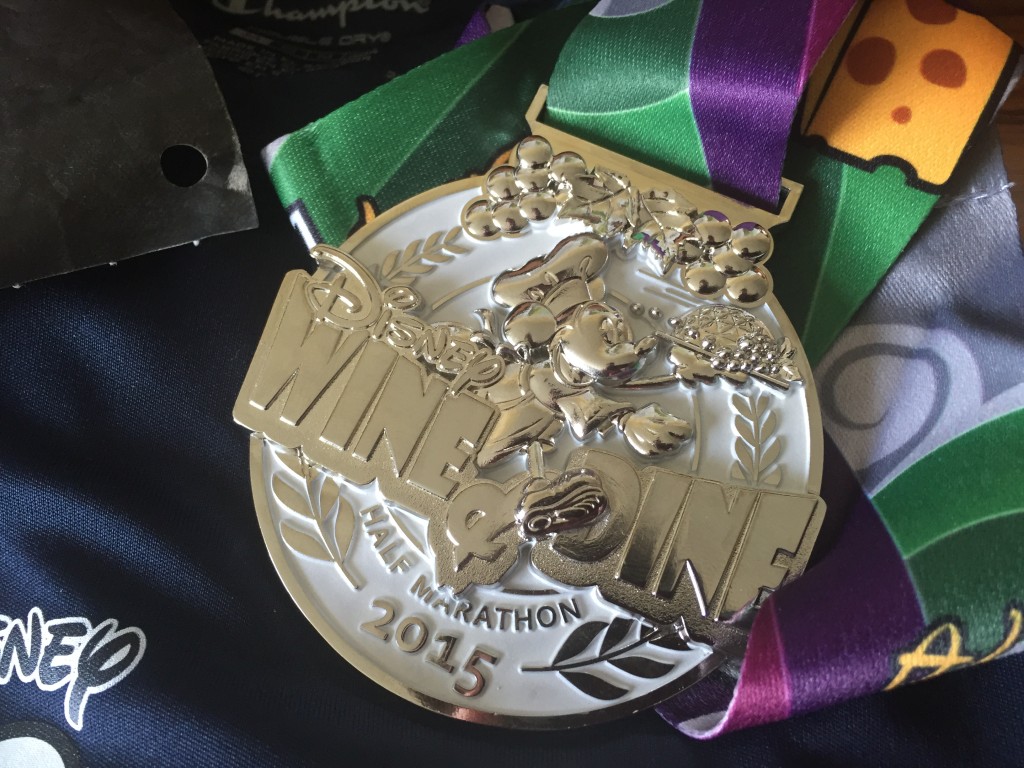