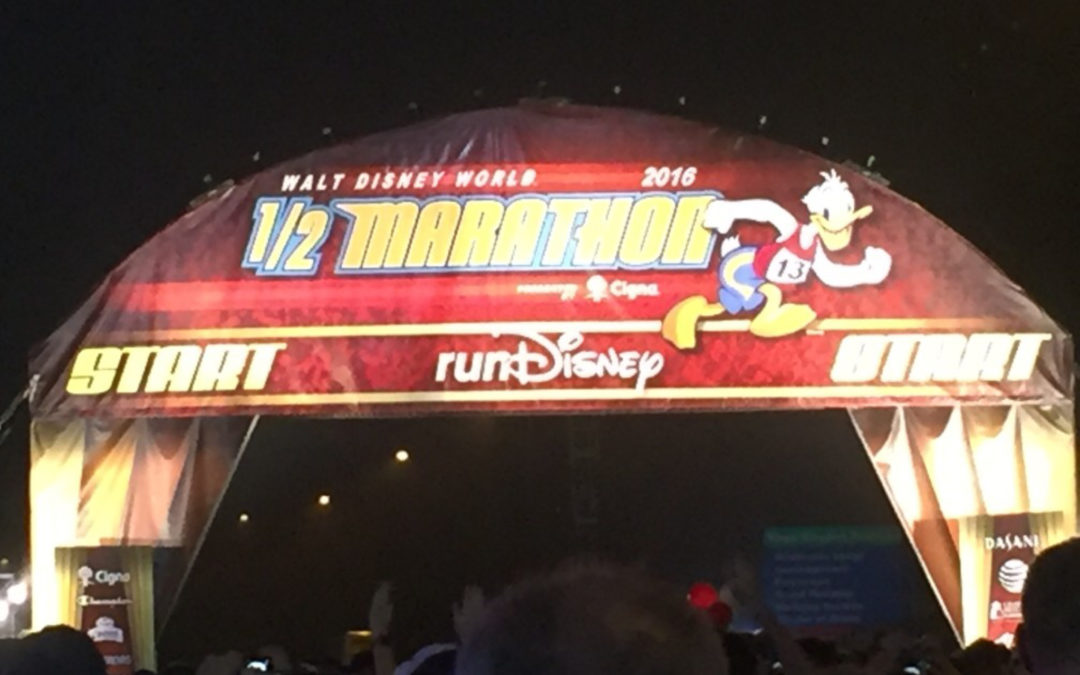 So they do actually have races where it’s not raining.

I’ll trade you rain, for a boatload of fog.

It’s day three. I got hardly any sleep the night before and I wasn’t really feeling that well. (more on that later) I chalked it up to nerves and we headed out at 3:30 am for the race. We were calling it a day early each night while we were there to buy us some sleep time.

We get there and its not raining. Yes! It’s not cold. Double yes! They say its going to turn into heavy fog, but it hadn’t rolled in totally yet. There were a lot more people here than the the earlier races. The WDW Radio Running Team picture blew up in size. Its was great seeing everyone and meeting some new running friends before the race. I checked in with several to see how their race went the day before.

I had the opportunity to get an early walk out with the Runners World crew to the starting line. They were going to be escorted to the front of the corals via shortcut. I thought it was more important to stay with the running team and didn’t think the shortcut would save a bunch of time. I was glad to stay with the team, but was wrong in thinking the shortcut was not a valuable perk. The start line is moved out onto the main road for the half and full marathon. While it may not seem far away, they bring you over 1/2 mile around back to get there. It’s so long that they have port-a-potties along the way and entertainment! 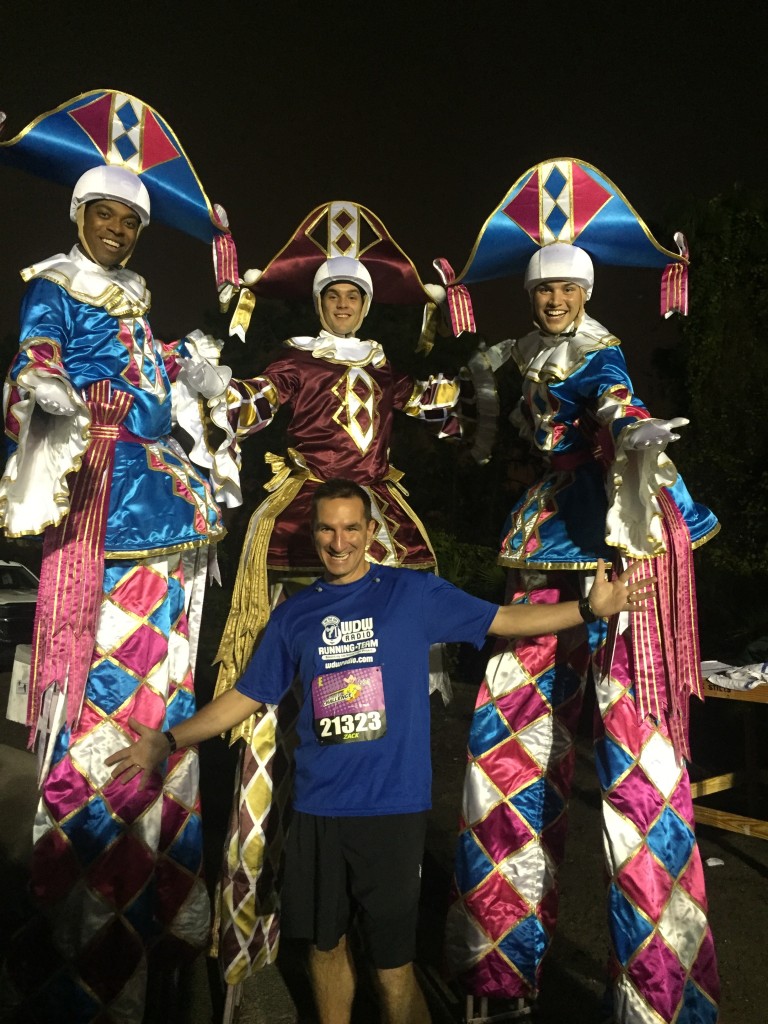 This is before you even get to the starting line.

It takes a little more time to get going since I was now in Coral E for the half and full marathons. I wasn’t feeling awful yet, but something didn’t feel quite right. They were moving through the corals pretty quick to get us all out there, so about 12 minutes after the first group goes they let us out. I was surprised by how many people were cheering at the beginning. Sharon had ditched me early to make it to the Magic Kingdom.

The first three miles didn’t have anything for you really to stop and get pictures at. They had a couple of school bands out which were great, a hot air balloon and a puppeteer with a giant Sebastian. I stopped at the gate to get a picture and kept moving on. 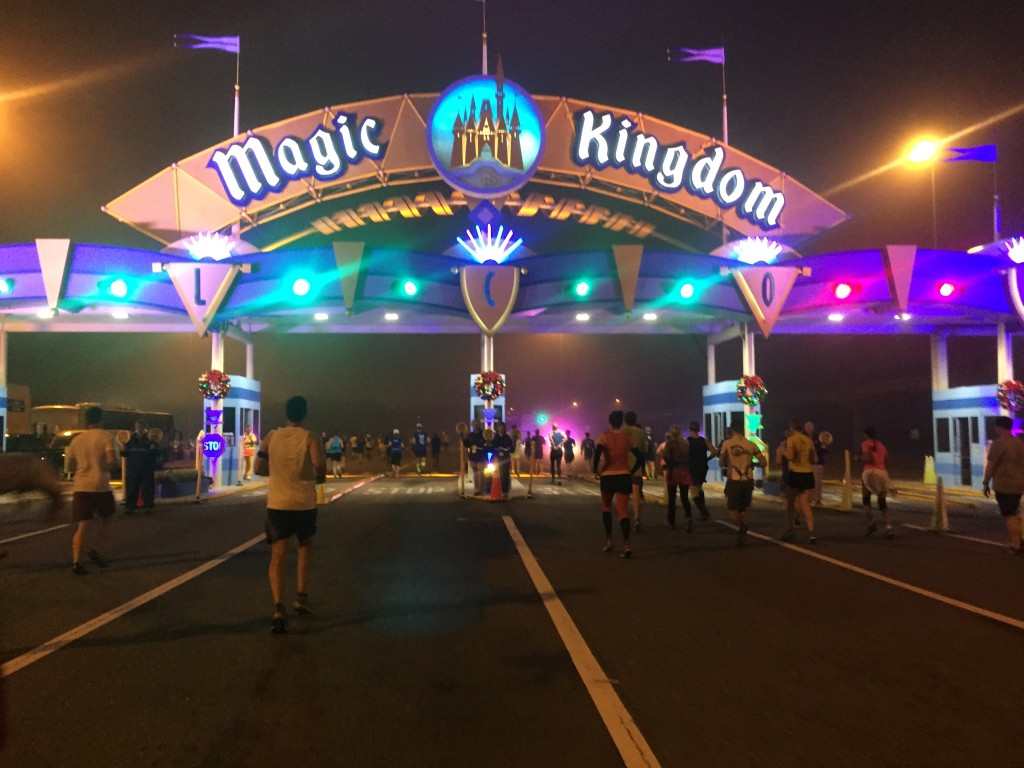 They had Wreck it Ralph and Venellope out with their float pieces from one of the parades. Although I loved the backdrop, I kept moving since I had them.  Up ahead though was a awesome surprise. Oggie Boogie from nightmare before Christmas! It’s really hard to find. He made an appearance at the Halloween shows but wasn’t available for a meet and greet. 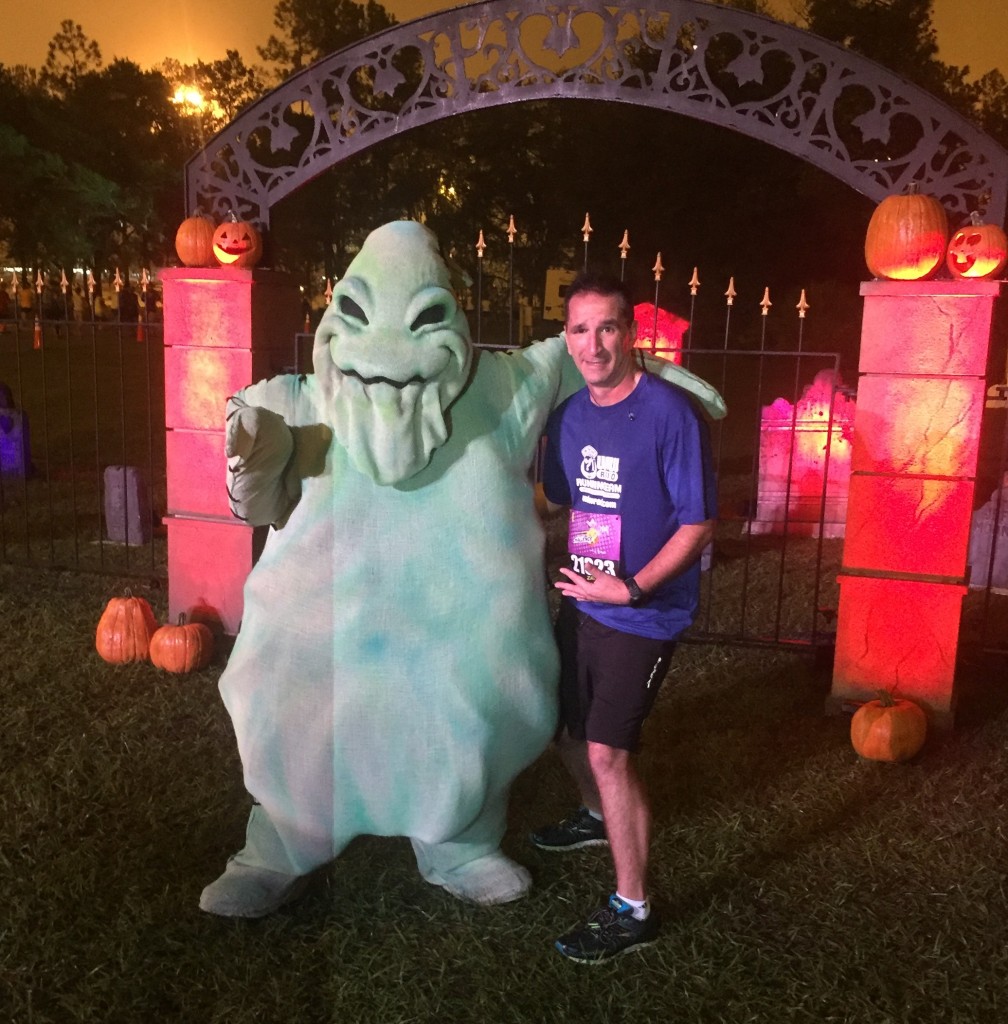 The stretch between here (MK parking lot) and the park was really difficult for me that morning. I think it was because I’d never run that course before and it just seemed like we were never going to make it there. We eventually did though and there is the WDW cheer group right in front. I was glad to see them! It was just the boost I needed. 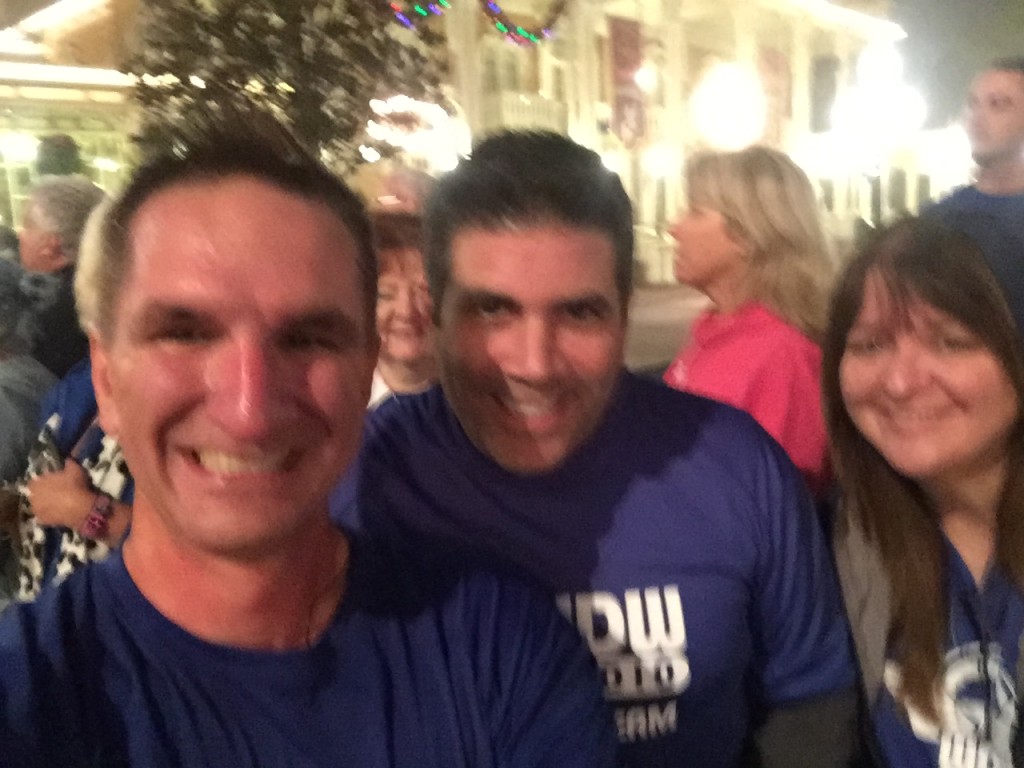 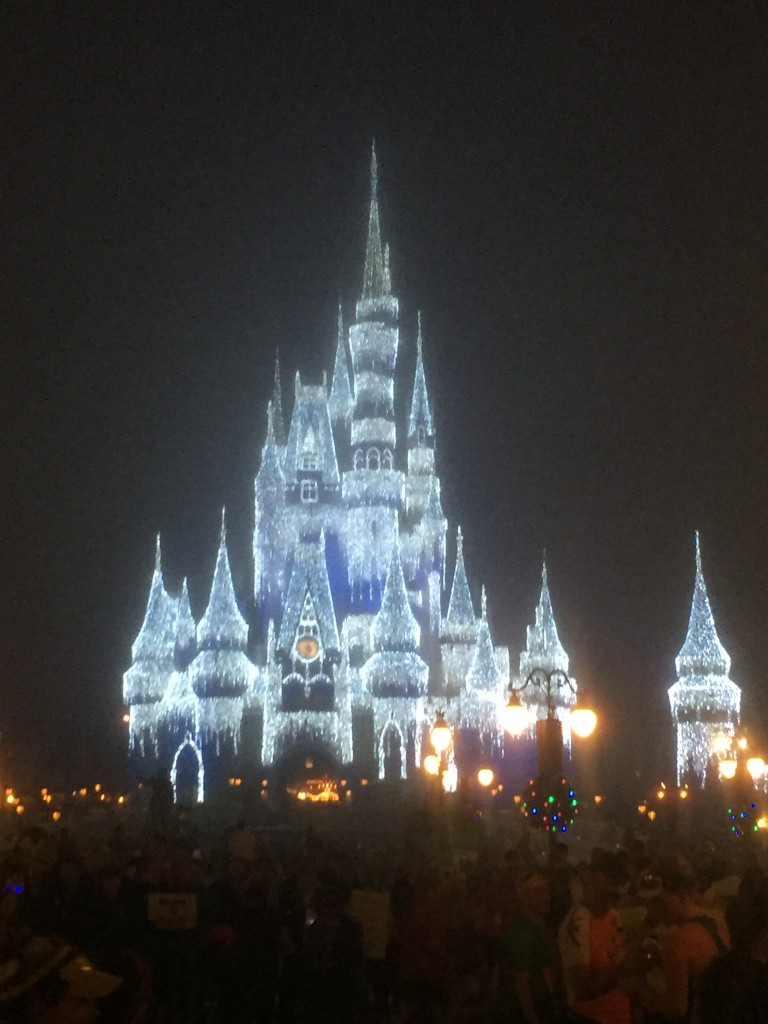 At this point the fog had really started to come in. Running down main street was awesome and it was crazy how many people were there cheering the runners on. Disney made up for the lack of characters leading up to the park in a big way here. 5 miles in and there were only 2 stops. In Magic Kingdom alone there were 5 stops. Mike (Monsters U again), Queen of Hearts and the Tweedles, and Ulf and Pub Thugs (from Tangled). I had to stop to see Ulf and the Pub Thugs. Again it was one I was super psyched about and everyone else just went by. 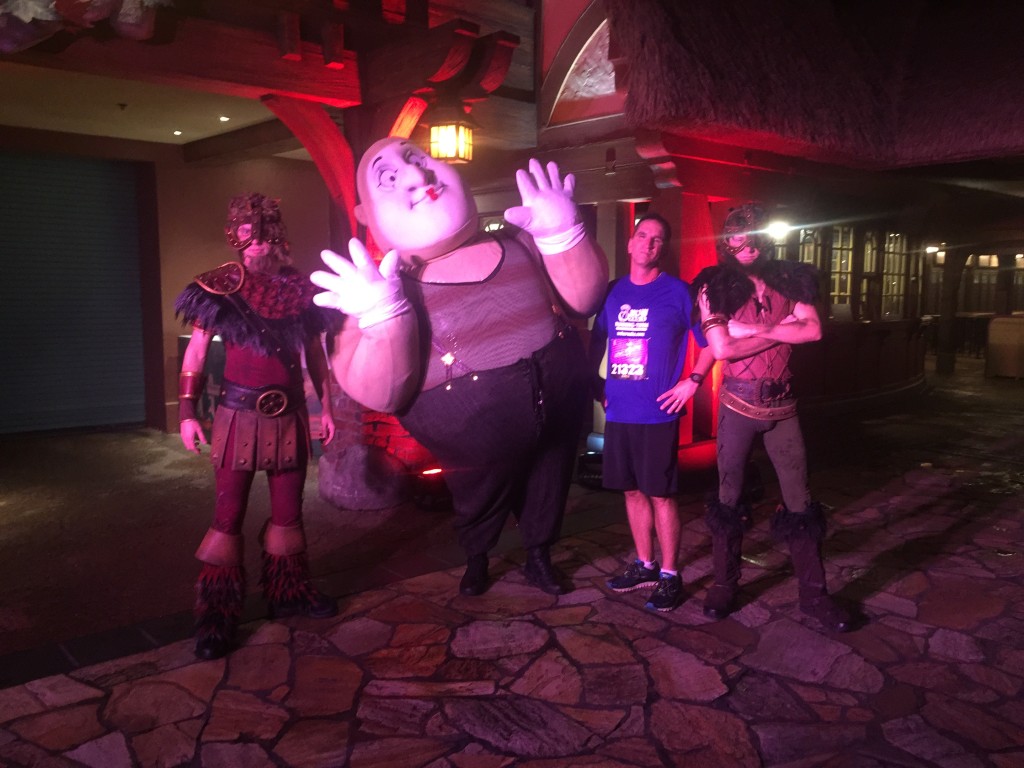 The Frozen Characters were on the back of the castle cheering everyone on. We ran through the castle and out the front. Course wise, this was an interesting stop because it narrows so much. There were a ton of photographers and a bunch of the girls start doing the jumping in place pose for the cameramen. It was oddly disorienting. They were telling us to keep going to the bottom to get pictures. That’s when you see the sea of cheer squad people and they are all wearing the exact same thing. I eventually find Sharon and Beth. Beth had made some fun signs for the races. I stopped for a minute, took a selfie with them and kept on moving.  I later saw pictures where that part of the course had become almost a standstill because so many were trying to get through at once. 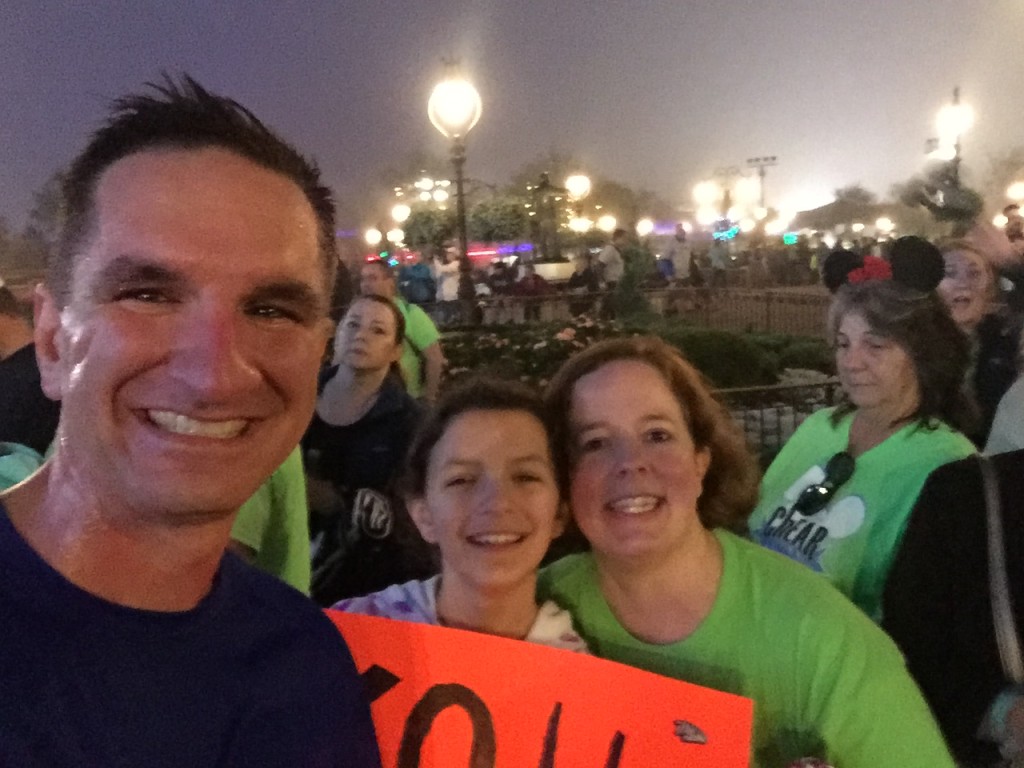 Woody and Buzz were out around the corner and I ran into Pattie again….or actually she ran past me.  They also had the train out and lit really nicely. It was interesting to see the same picture of the train after the sun came up. It didn’t really have that extra touch to it. There are definitely pluses and minuses to being in a more forward coral. 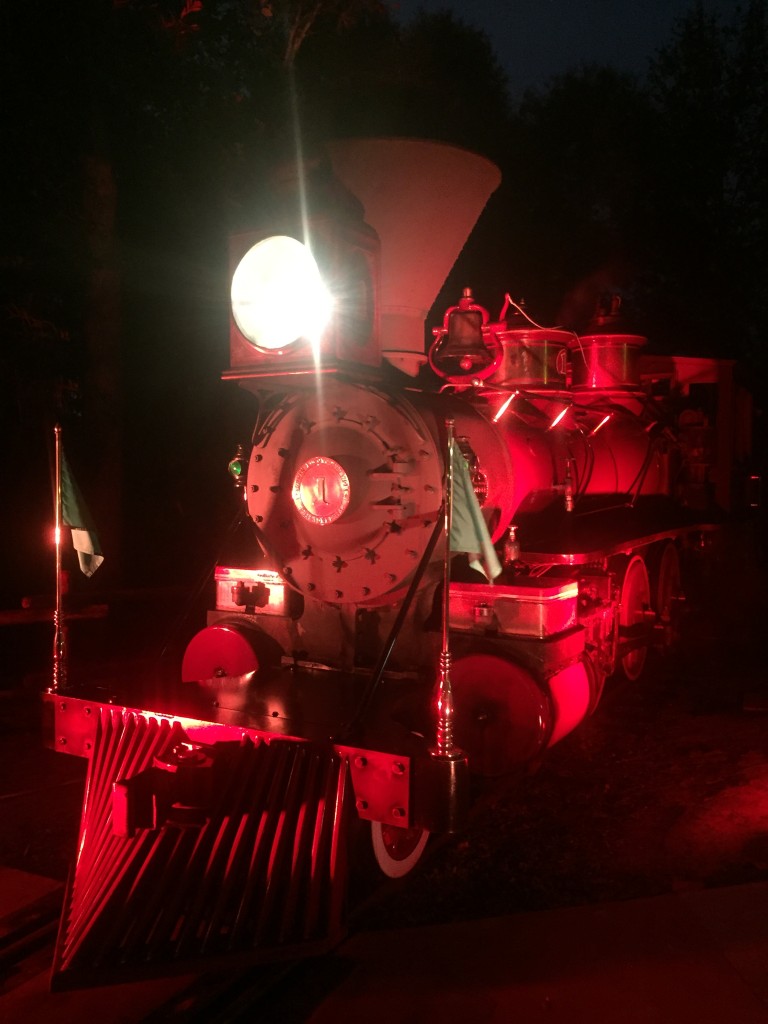 At the bottom of the hill was an amazing Peter Pan float with a ton of characters. They were real fun and I’d never met the lost boys before. 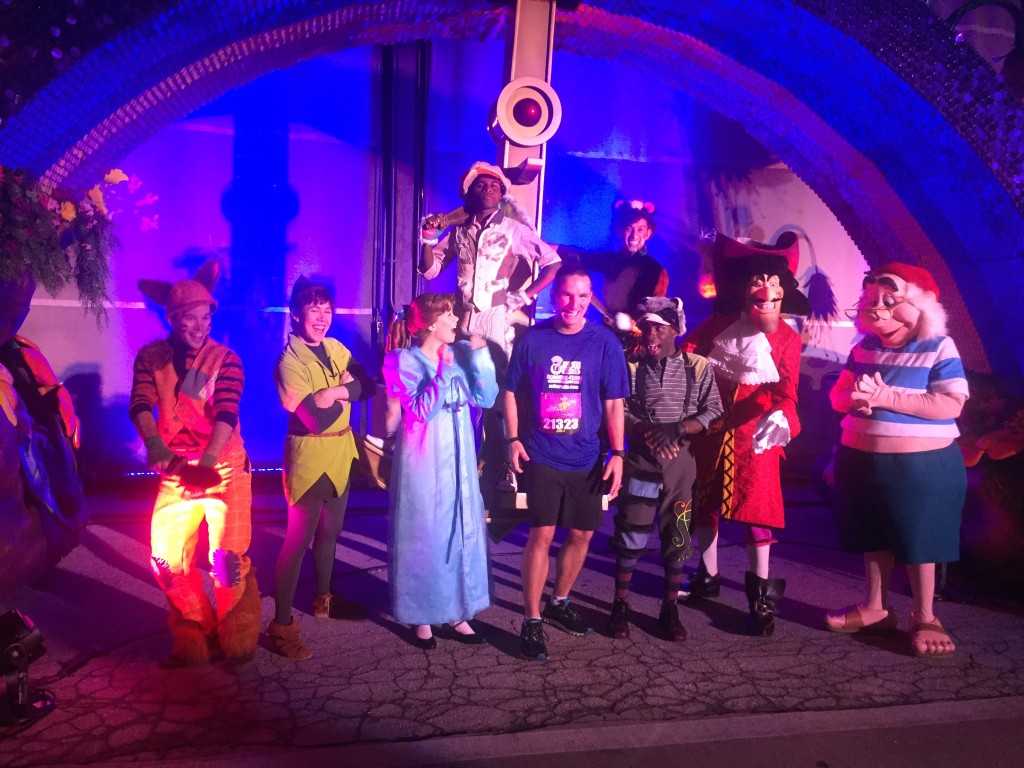 The course leaves the park and then hugs around several of the resorts before heading back to Epcot.  they had Mary Poppins, Bert and the penguins out at the Grand Floridian. Stitch was out at the Polynesian.  Donald was out in his golf gear at the golf course. Loved the golf cart! 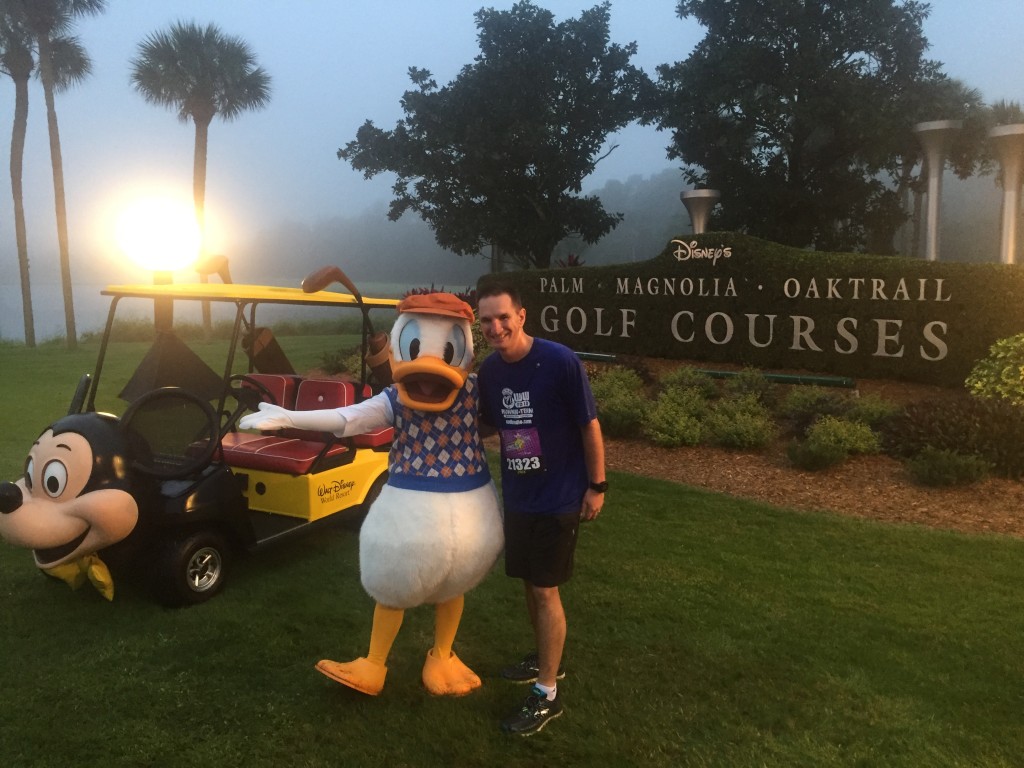 The sun was coming up at this point and the fog was really starting to show up. I was also starting to feel pretty bad and my stomach was killing me. At mile 9 I had to stop and pull myself together. After a short break, I was back out there trying to finish the race off. They have a green army man and some troops out on the course towards the end. He’ll yell at you and his group will try to make you do pushups if you are walking. I didn’t try to get a picture with him at the Wine and Dine because he’ll give you a bunch of grief for it.

I get on the side of the road to try to snap a quick picture with him.

“What are you doing citizen?” He yells.

“Let me get a quick picture…” I say, as he wont stop for me.

“Well dont let me hold up your time for the race. Take you picture and get going!” 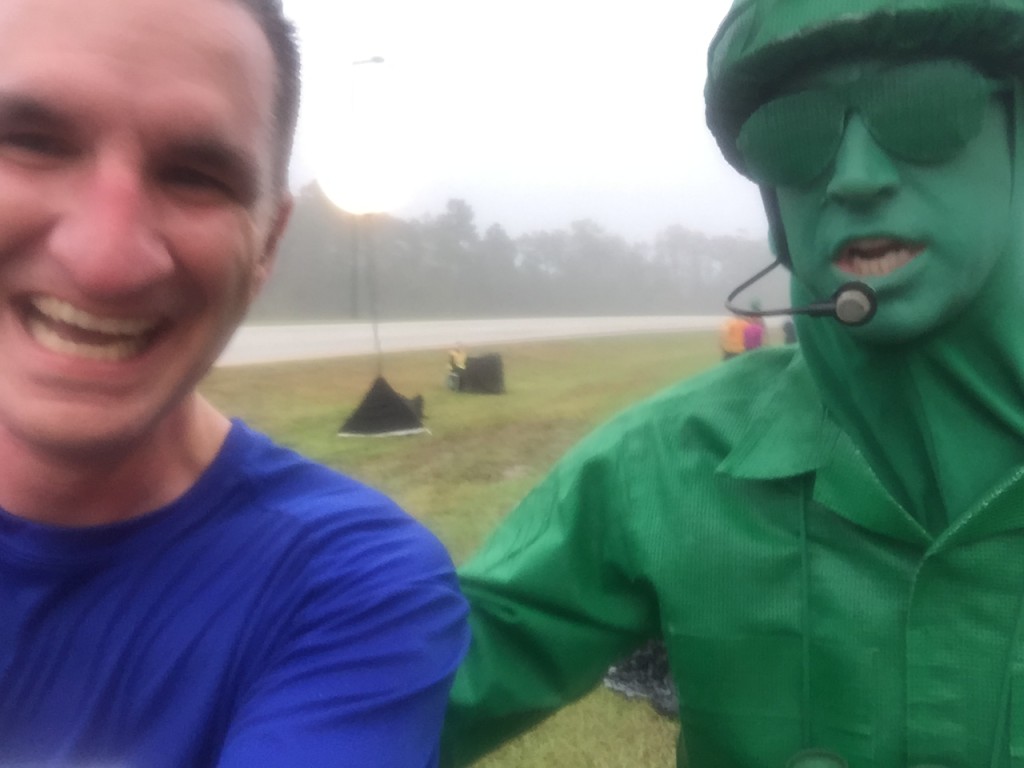 Meanwhile his troops have got people doing pushups.

A few more turns and we are getting ready to head back in to Epcot. I beat Lou and the group to their second cheer point. The inside of Epcot went really quick. It all stayed in the front before ending at the normal spot. Scrooge was out and I ran into Disney Vacation Genie! That was a fun surprise. 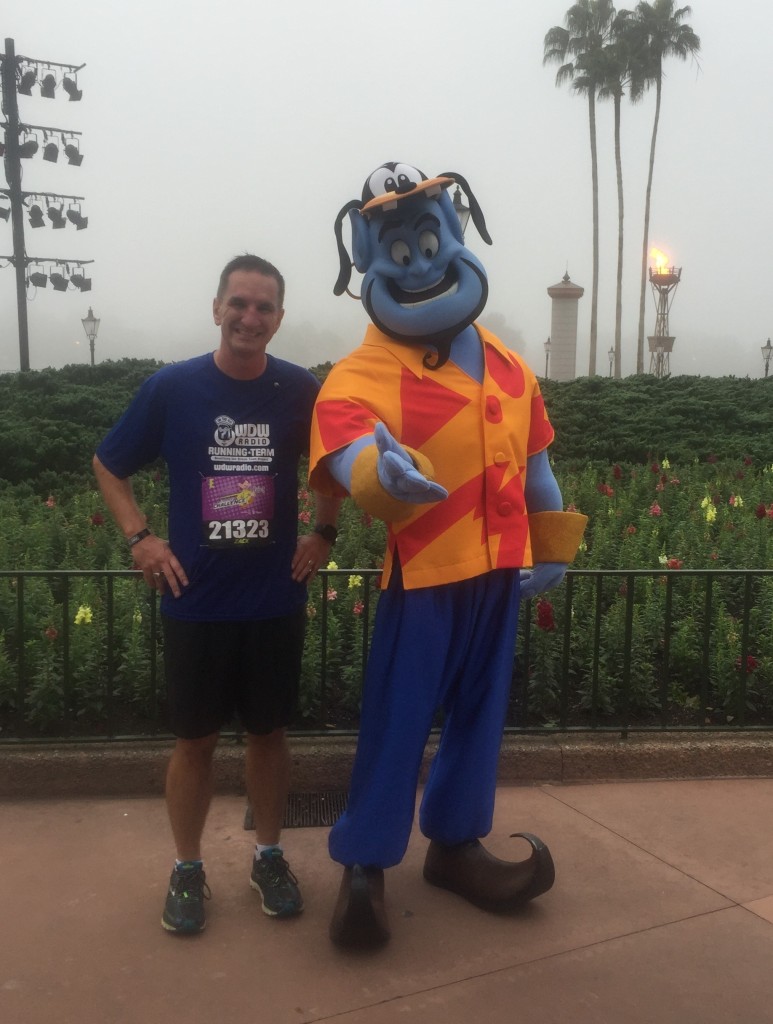 Notice how foggy it got by the end.

Mickey and Minnie were at the finish line so I had to get one last picture with them before crossing the end. 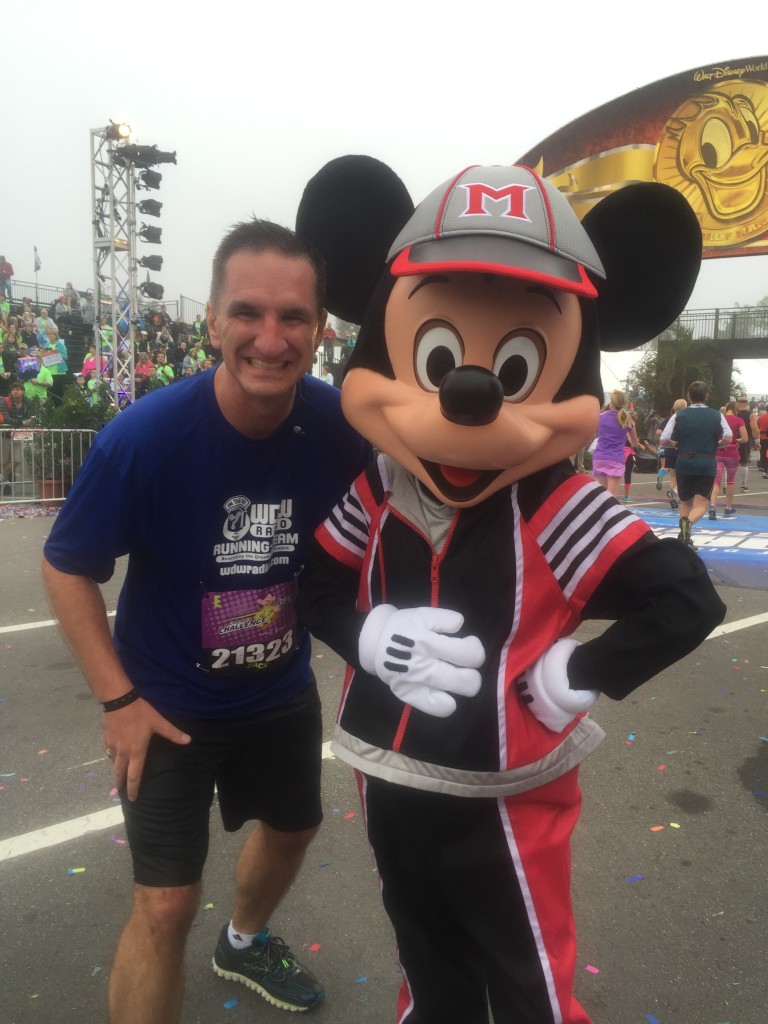 I finished up, met up with Sharon and the kids and headed to breakfast at the retreat. I also got a massage which was a life saver for me after the race. 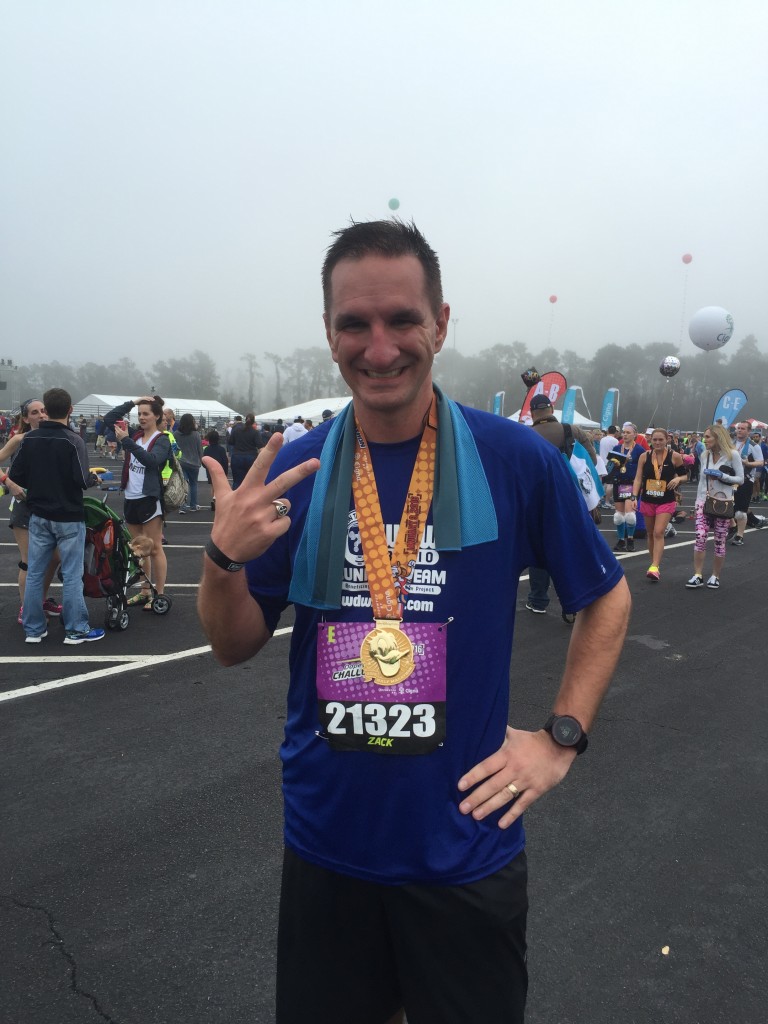 Three down. One to go! Check back tomorrow for the full marathon recap.