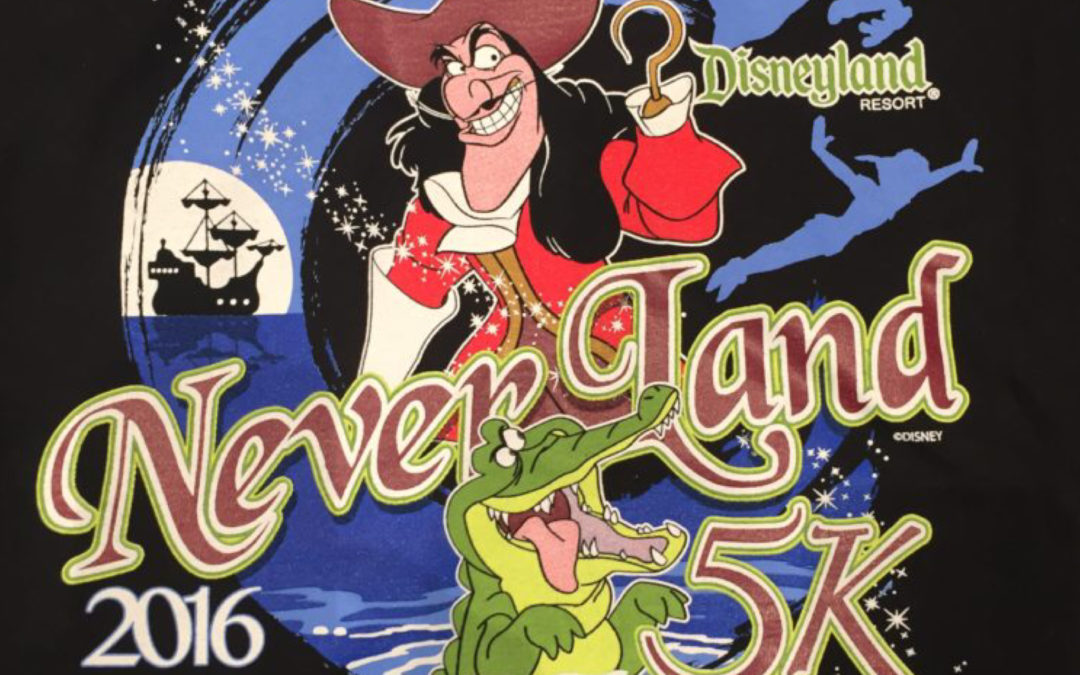 So different and yet so familiar.

Well the time had come to conquer and complete the women’s series of Disney races. (In the manliest way possible).  The experience was much like Disneyland and Disney World. They feel sort of the same, but are very different.

Let’s start the whole experience with a curve ball to what I was used to. The expo here is in the Disneyland hotel which is obviously much smaller than the ESPN center on the East Coast. Gone are the long lines outside, to be replaced by multiple snaking lines all over the place to get everyone in. You start out in an underground parking space. From there you finally get escorted outside the convention hall in a line. You go from that line to a line inside the expo to get into merch. Finally you make it in to the merch area. I got there an hour before opening. Typically the east coast will open early to start processing the line. That was not the case here. I was in line for 2 hours to walk away with a magnet. 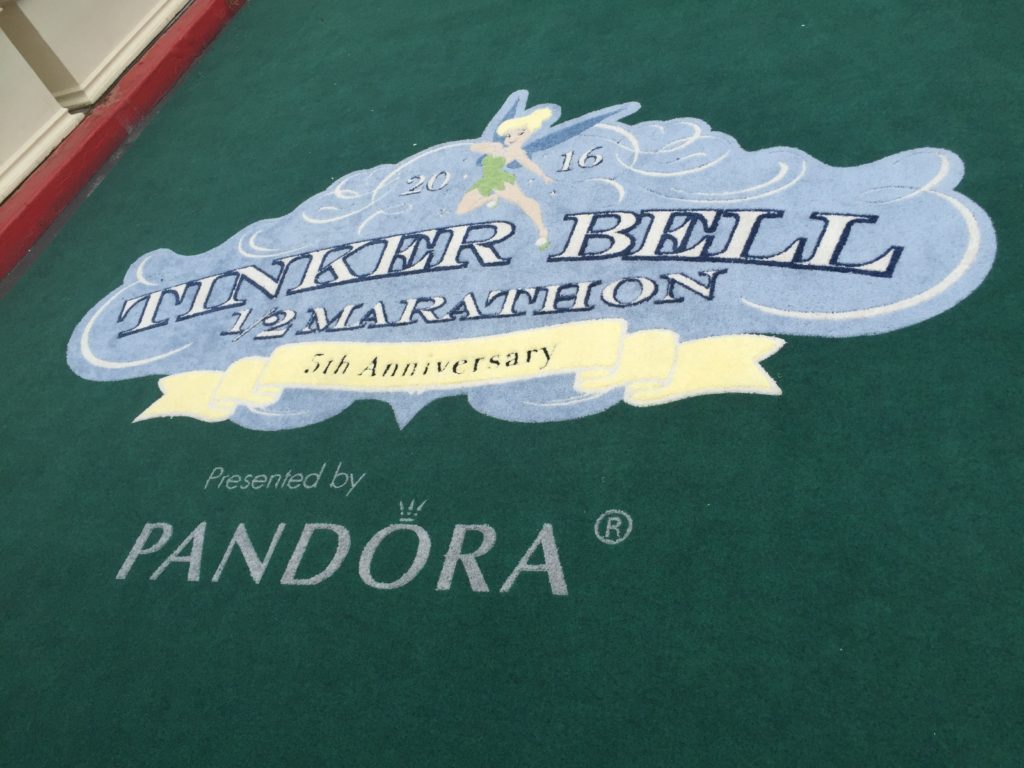 On the way to the first underground line. At least it had a good first impression!

The reason for the slowness of the line is that they were letting very few people in the actual merch area at a time.  They started doing this at the last Star Wars race in April in Orlando. It makes for a much more relaxed buying time, but makes the wait significantly longer. I haven’t decided which I like better. I like not waiting in line forever, but I also like not having to deploy personal defense measures as the ladies are trying on the few guys clothes that are there. There was also no yelling and freaking out while holding a $2000+ basket of merch. I just want my magnet.

The expo was much more intimate, but it was fun. Easy in and out on that side. Got to spend some time with Jeff again at the Expo. It’s also good to see him and Barbara before the races. 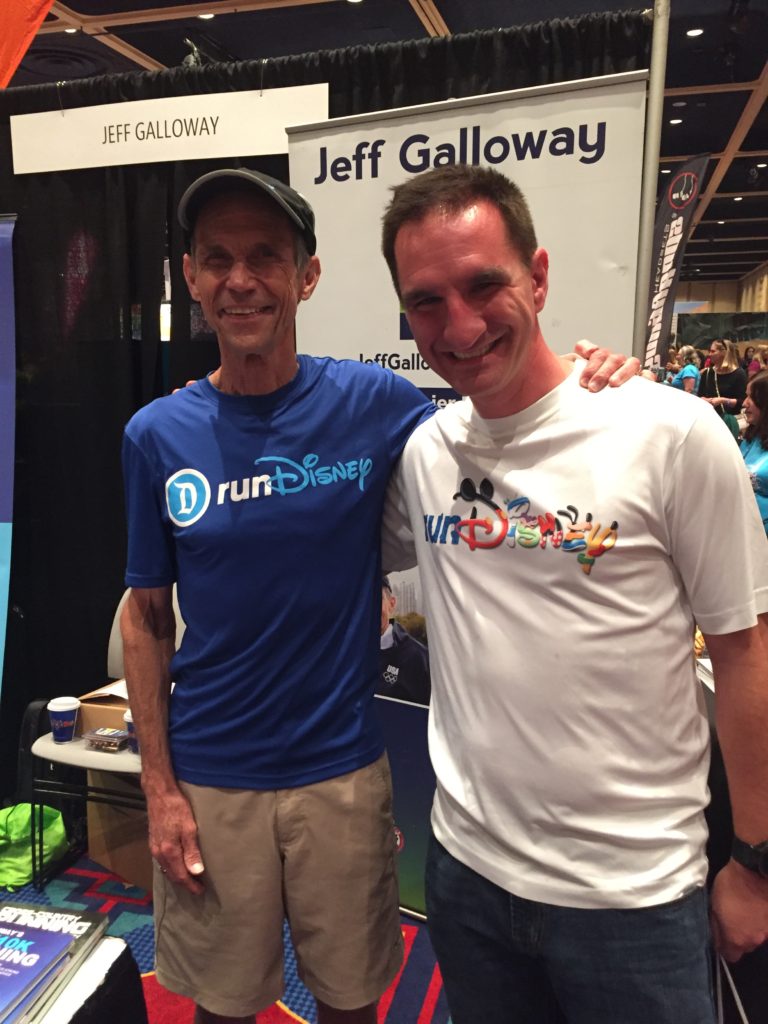 There were several neat booths up for this one. Autopia had just reopened and they had a cool spot there. I ran into Dave from the MickeyMilers so we got a picture together. They also gave out exclusive drivers licenses for the event. They currently have remodeled and the original cars mixed in together at the attraction.  They are nice upgrades. 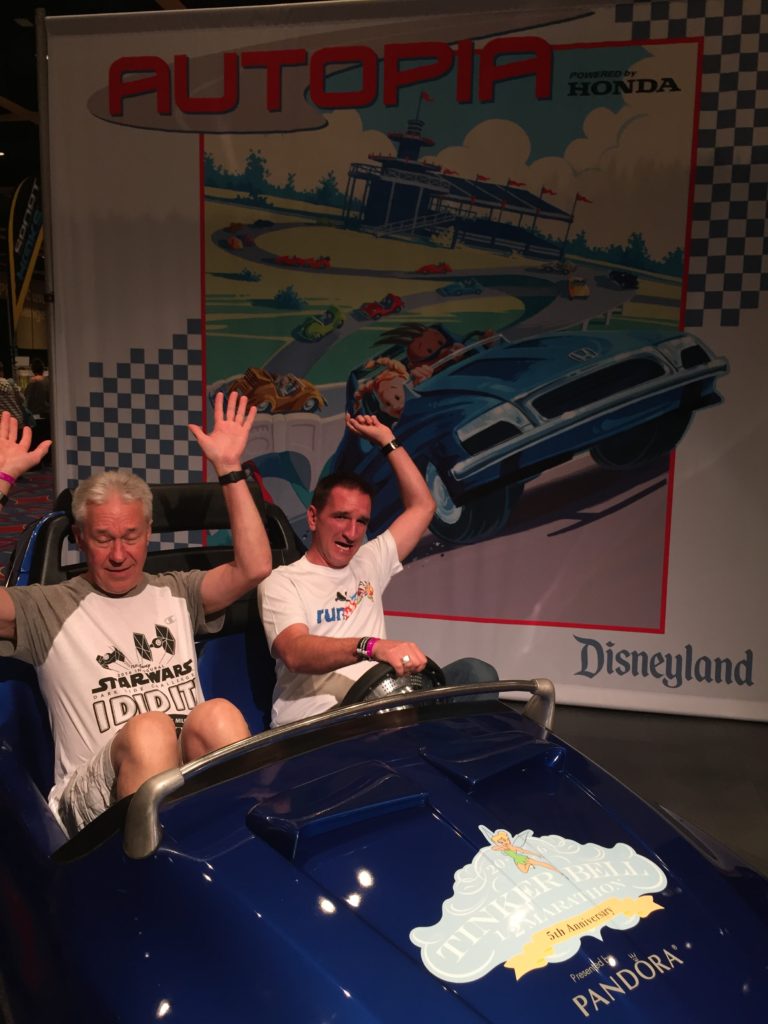 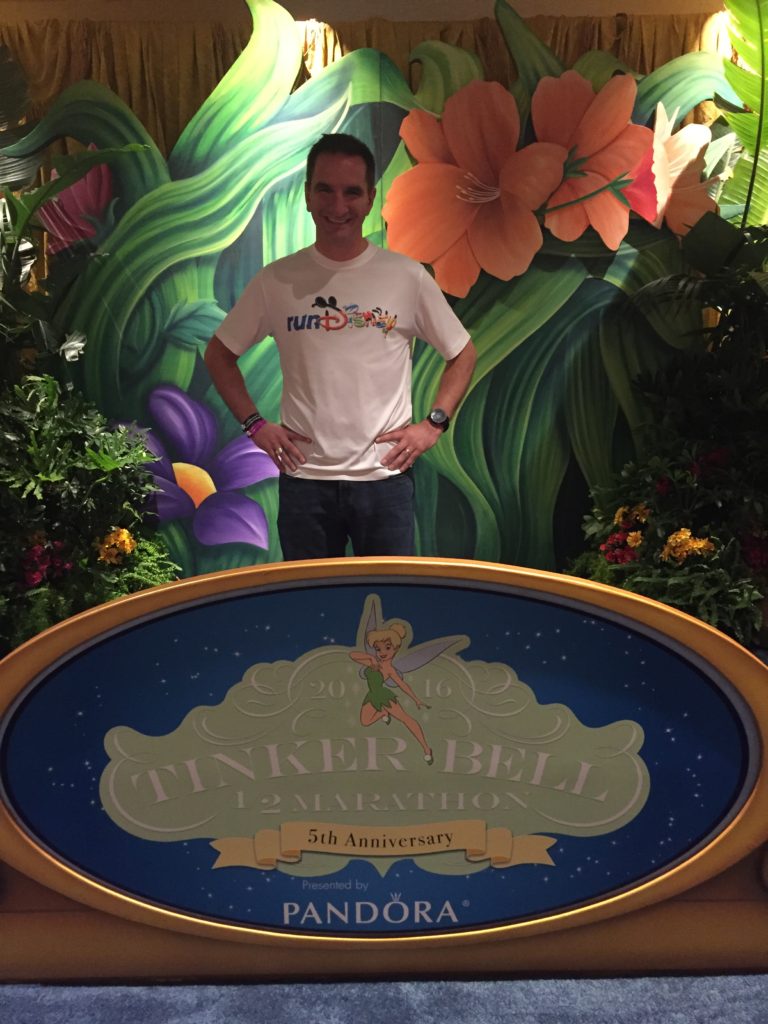 This was equal parts madness and fun! Someone on the running team pointed out that there wasn’t a letter (coral placement) on the 5k bib….that means free-for-all running. I made sure to get there super early to get towards the front. What I thought would happen, did indeed happen. There were a bunch of people at the very front that had zero intention of doing anything besides a walk. One lady who was in front of me said that her goal was to finish the race in an hour. Now don’t get me wrong, I’m 100% all for everyone at any health level getting out there and participating. I also understand the strategy of being closer up front to buy yourself more time to finish. My thought is that the first 10 ft of the front coral is not the proper place for those runners. You put yourself at risk of getting run over from those behind you. I also realize that the 5ks are the first race ever for many people at these races and they may not know all the race etiquette out there.

There was no starting banner. There was no fireworks. It was just the announcer saying “here we go..”

I had zero intention in killing myself or trying to do great in any of these races. I had only run twice between Princess and Star Wars (Feb-April) and only twice more between Star Wars and Tinkerbell (April-May). I was also coming off a back injury from work the week before. You know what happens though….. it’s 30 seconds before the race and I had wiggled my way to the front of the line. I look around and my brain says, “Time to try to win this…” It’s well documented on this blog that my brain is my nemesis that hates my body, and will throw out common sense without hesitation. “By the way, make sure you stop for pictures..” Thanks brain! 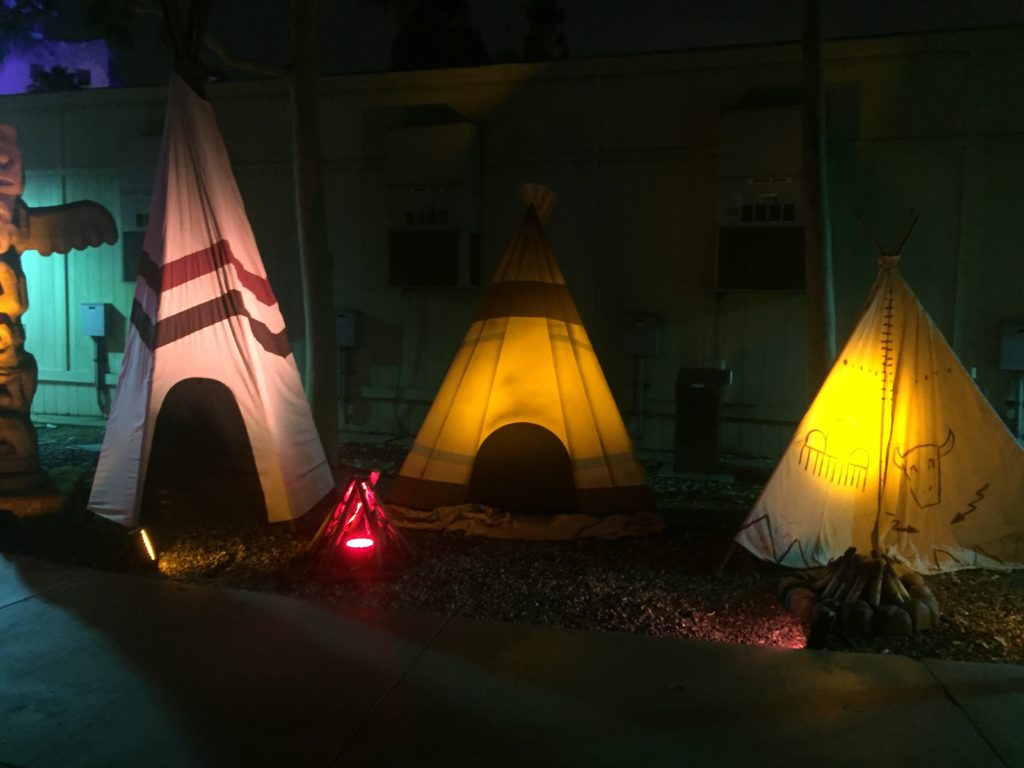 There were very few character stops at any of the Tinkerbell races. They did have some good themeing in spots. Above is the mile 1 decorations. I will say it was really neat to run through both parks and not really have anyone else around.  You are able to enjoy the area and not be in a sea of people.

They didn’t have the characters really out, but they had a ton of cast members dressed up as pirates. I stopped and got a picture with this one. What was really cool is that he remembered me at the other races and gave me an extra dose of encouragement. 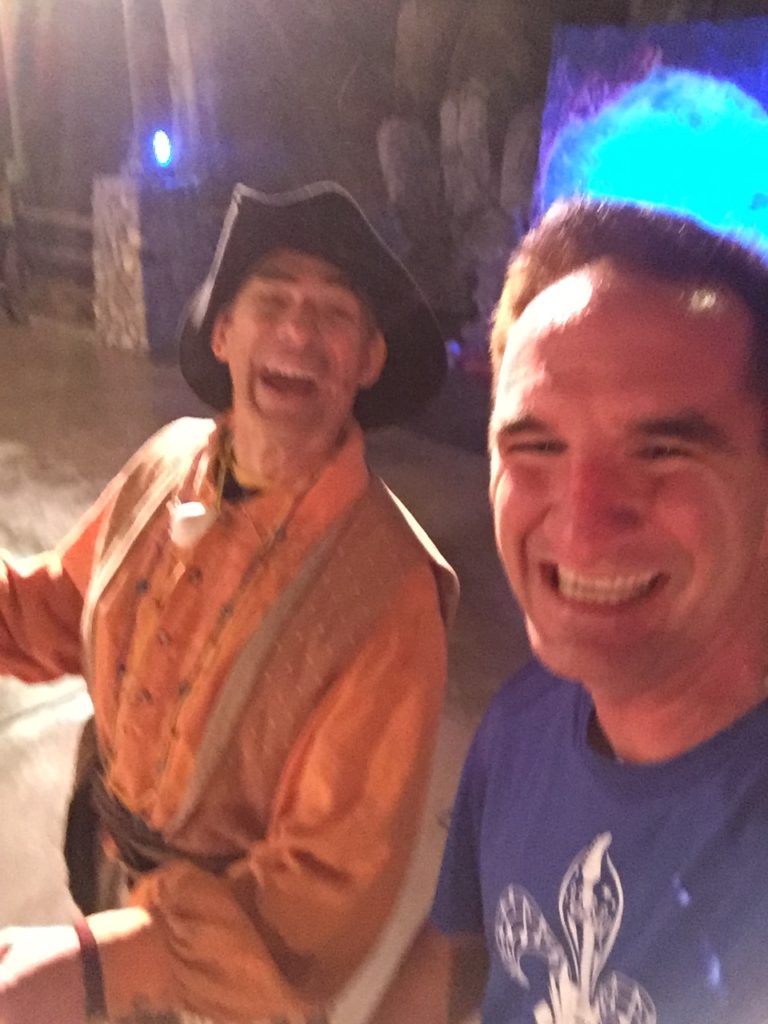 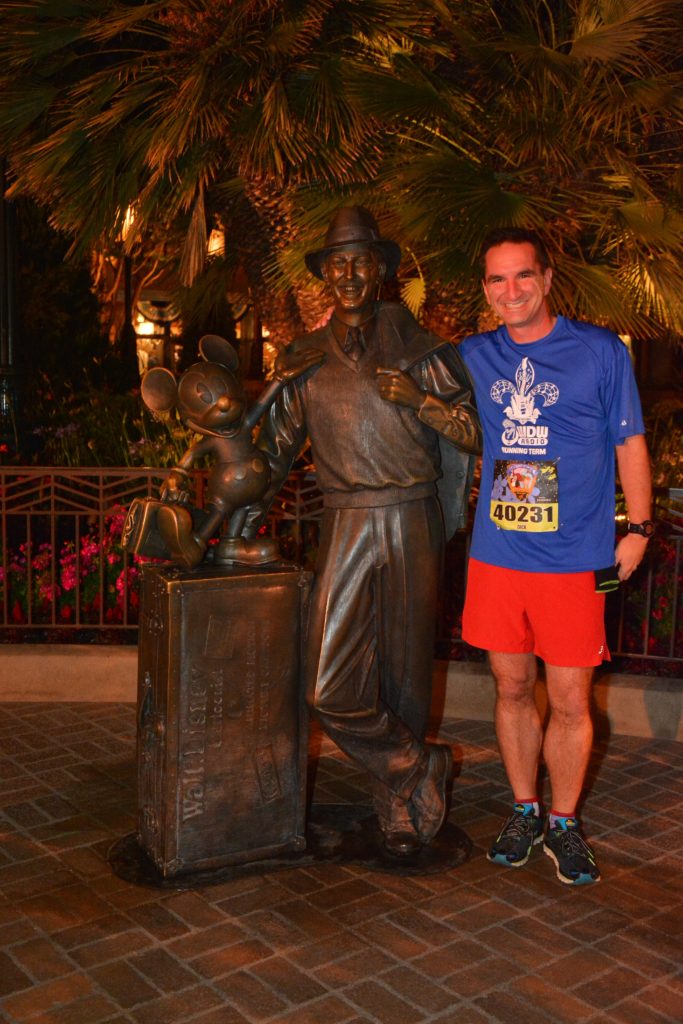 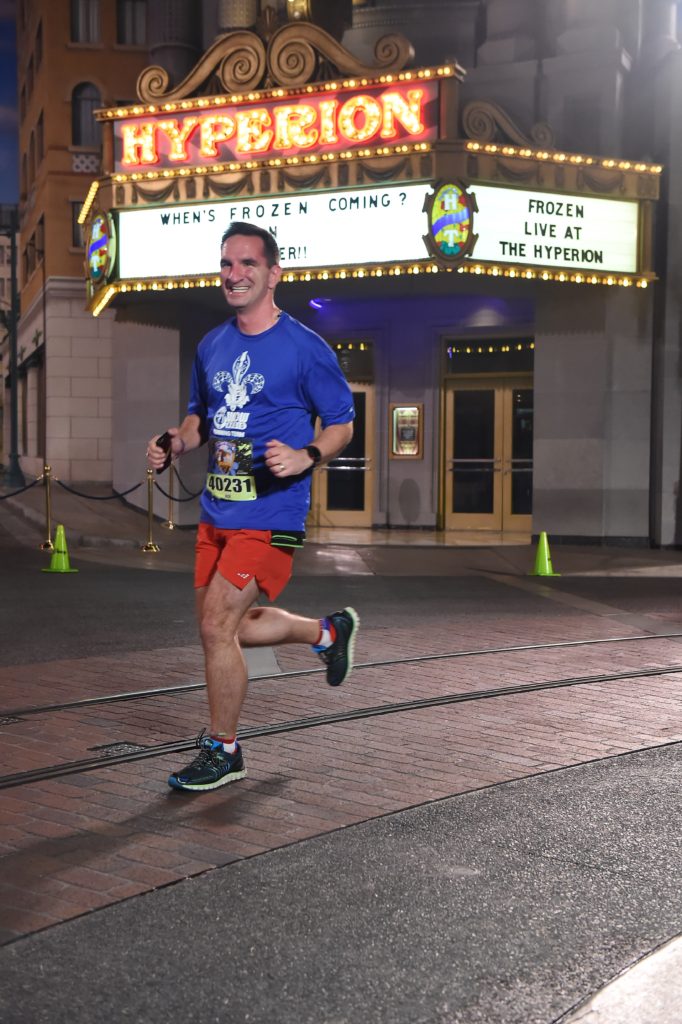 The lost boys were out, but they were riding on the carousel in California Adventure. I wasn’t going to let this opportunity go by because they weren’t standing still. I needed those characters for the list! The cast member just started snapping anytime one came by.  I got a couple that were OK enough to count. They would eventually get off the ride and take pictures with runners. There are advantages to being middle of the pack at these races too. 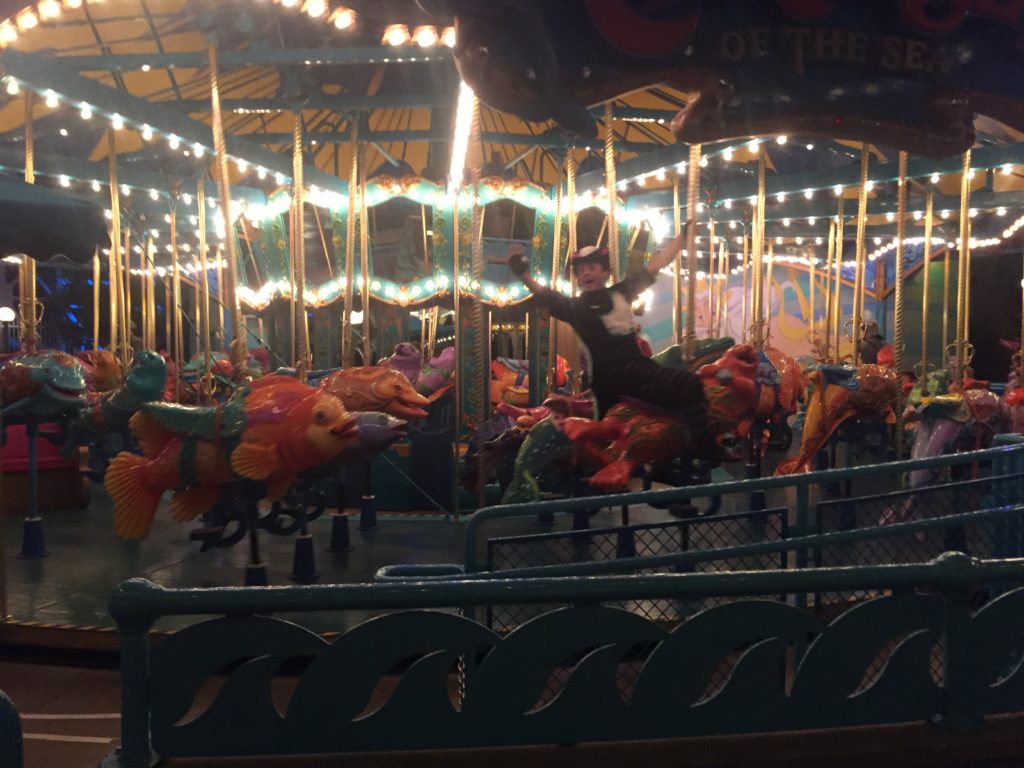 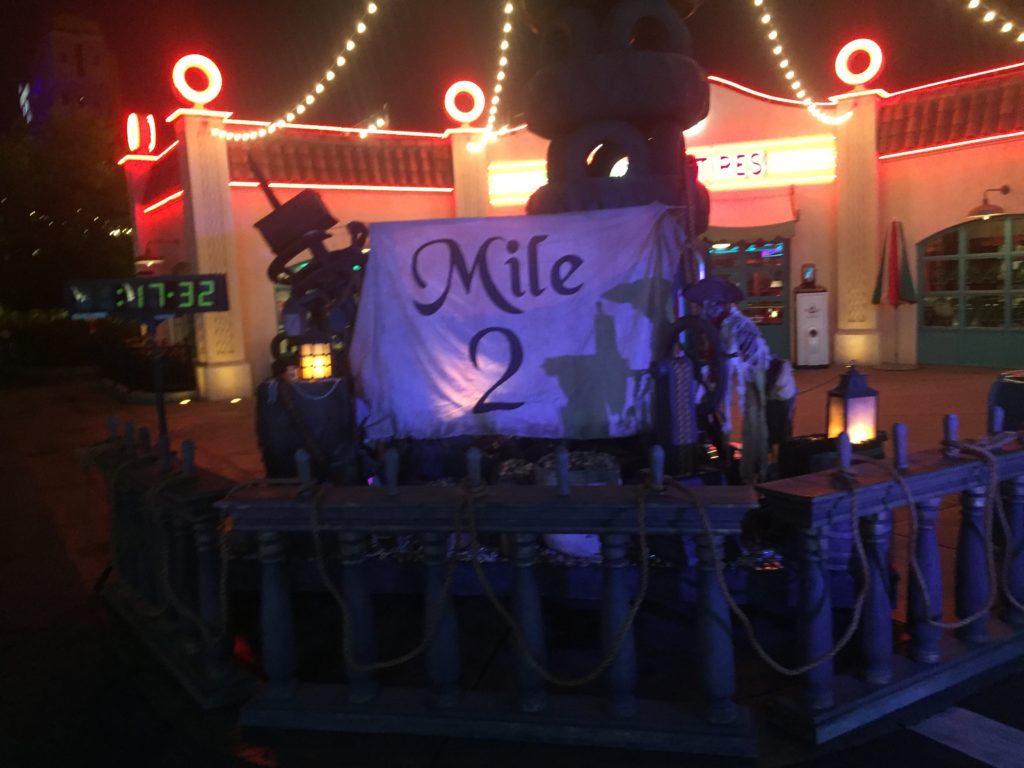 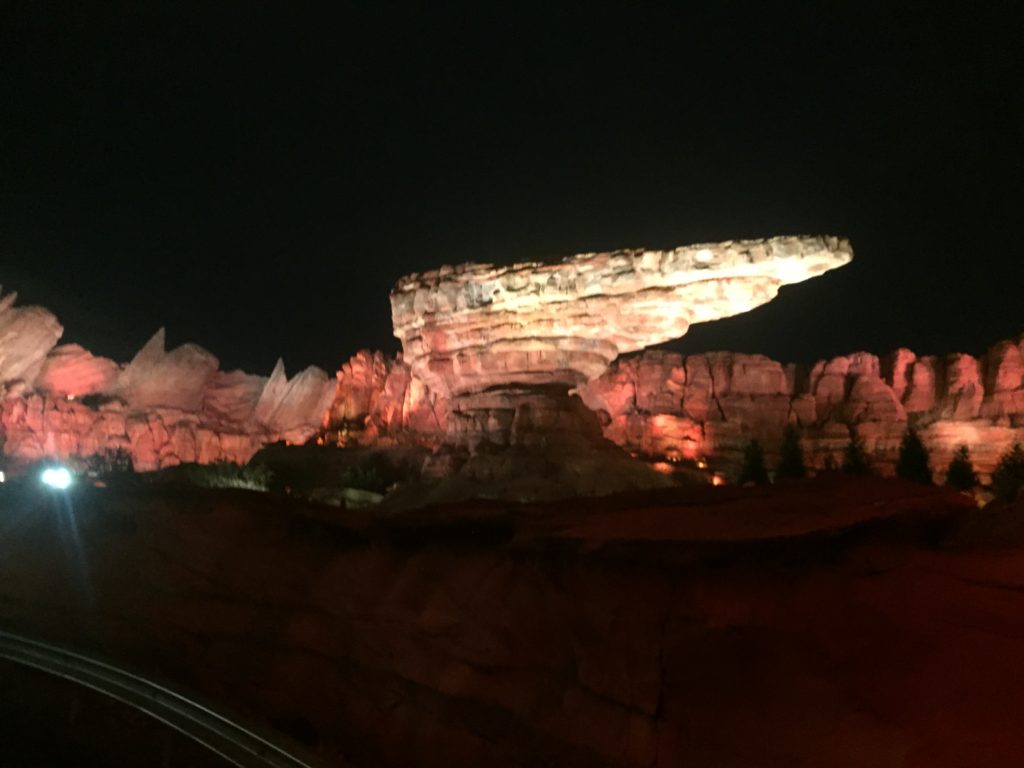 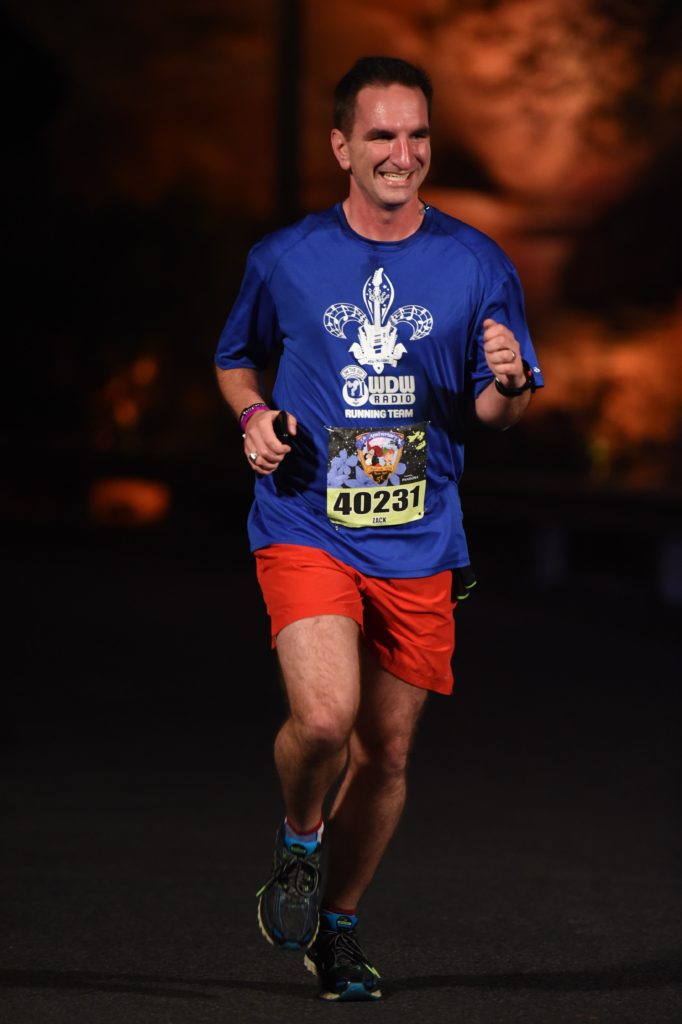 From the pier, it was less than a mile to the finish. Wendy and Peter were there all by themselves. It was fun getting a picture with them! 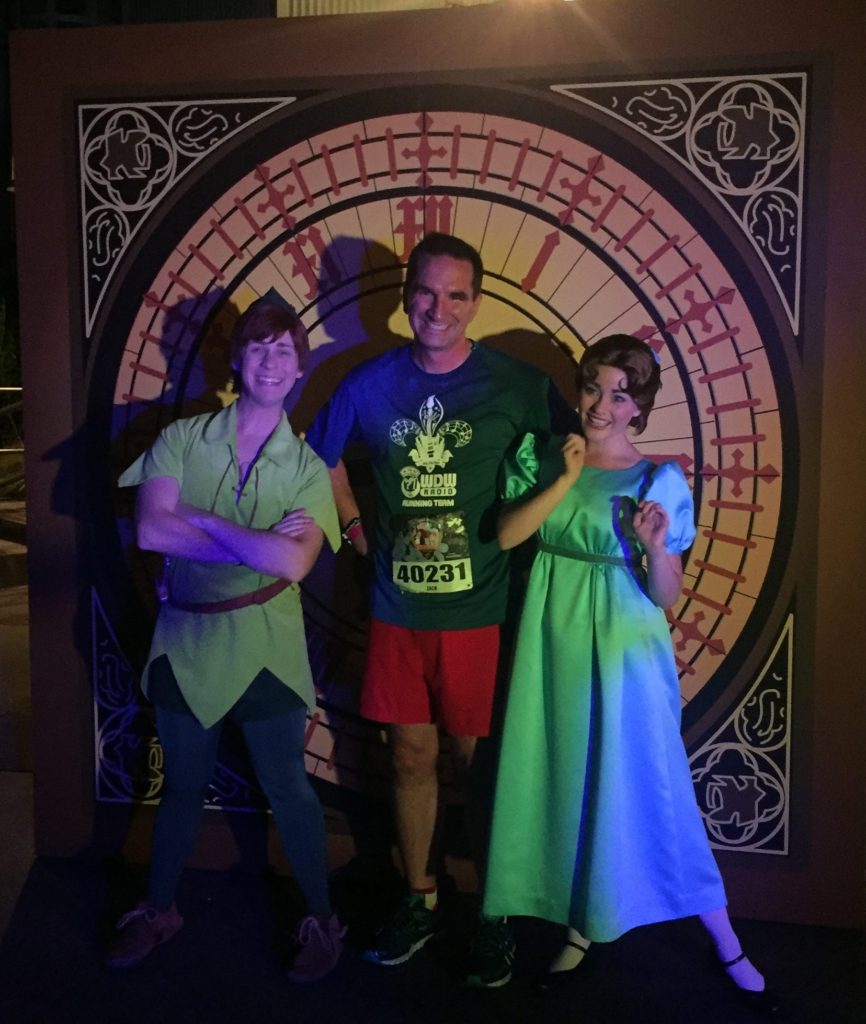 They had this next backdrop towards the finish where all the spectators were. It made for a slightly awkward time taking the picture with noone else around on the course…but hey why not. Might as well have a seat and chill right before the end of the race. 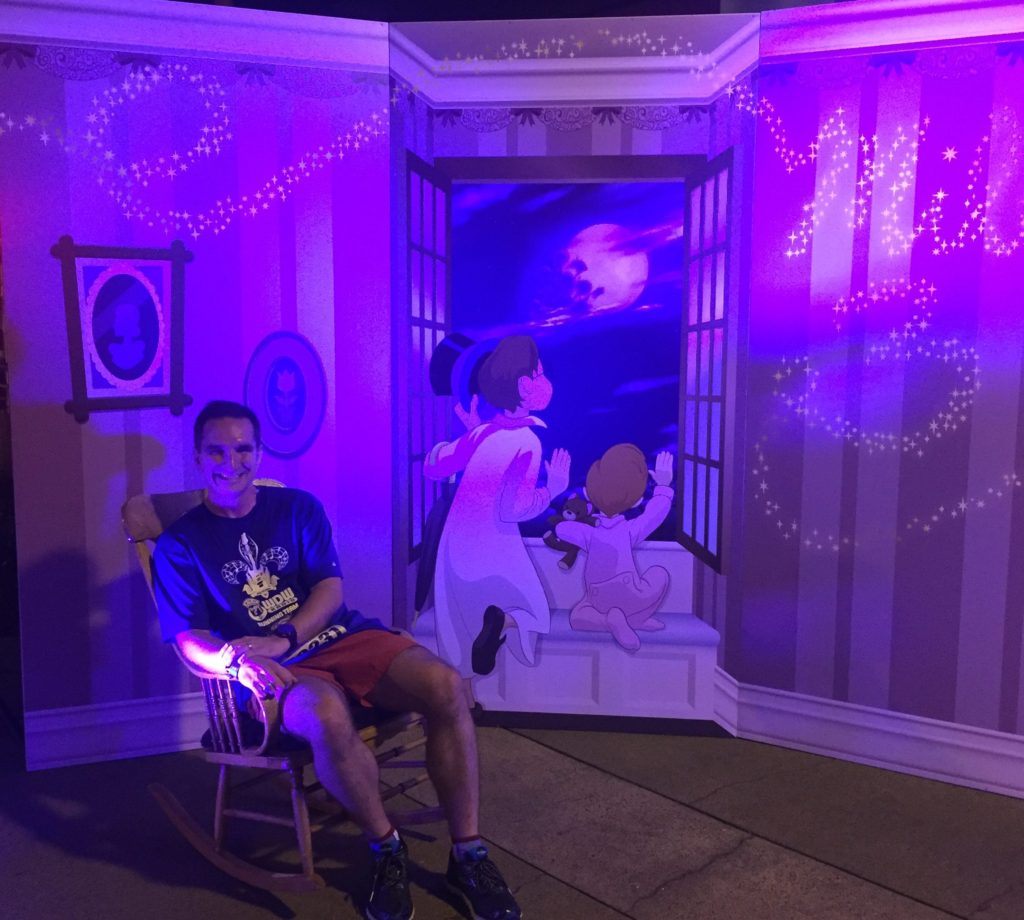 The end was just right around the corner and it was finished before I knew it. Great cheering crowds at the end!  I ended up in the top 20 for the 5K. That was pretty exciting. I thought that I had gotten the fast one out of the way and the next two would be cruisers. The brain though had already started concocting strategies for the next day. 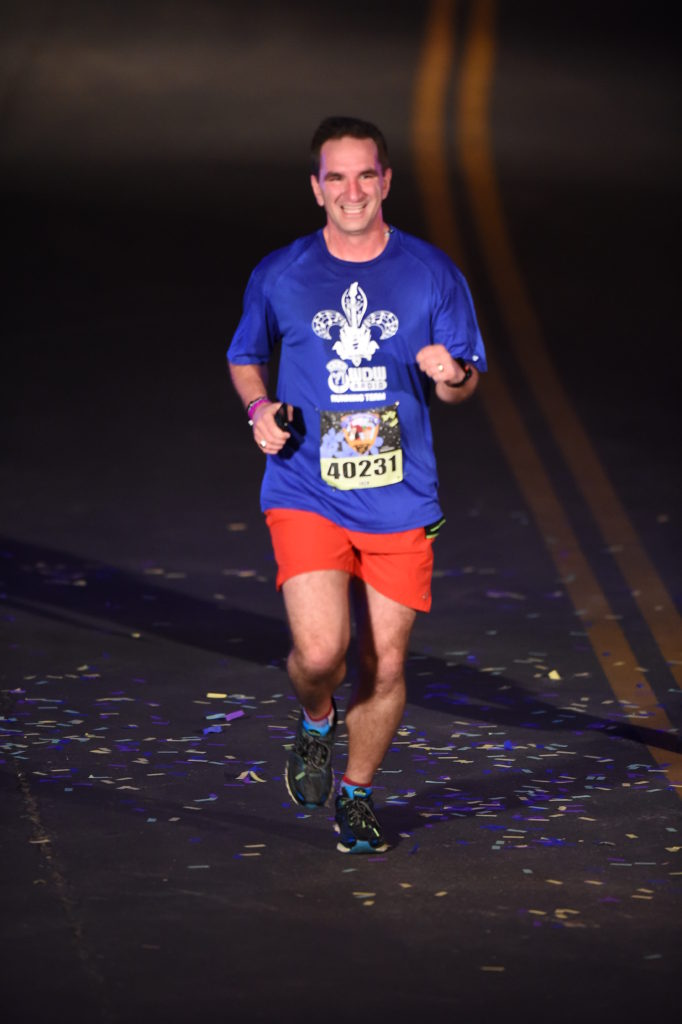 So here is one tip for you if you ever do this race. Do not listen to them when you ask for directions back to your hotel. The race ran through my route to the hotel. They told me and another guy to take a “shortcut” around the backside. 3 miles later and after crossing I5 twice, I finally made it back to the hotel. There are lanes that they create through downtown Disney that will get you back in a relatively short amount of time.

Next up the 10k and half recap!