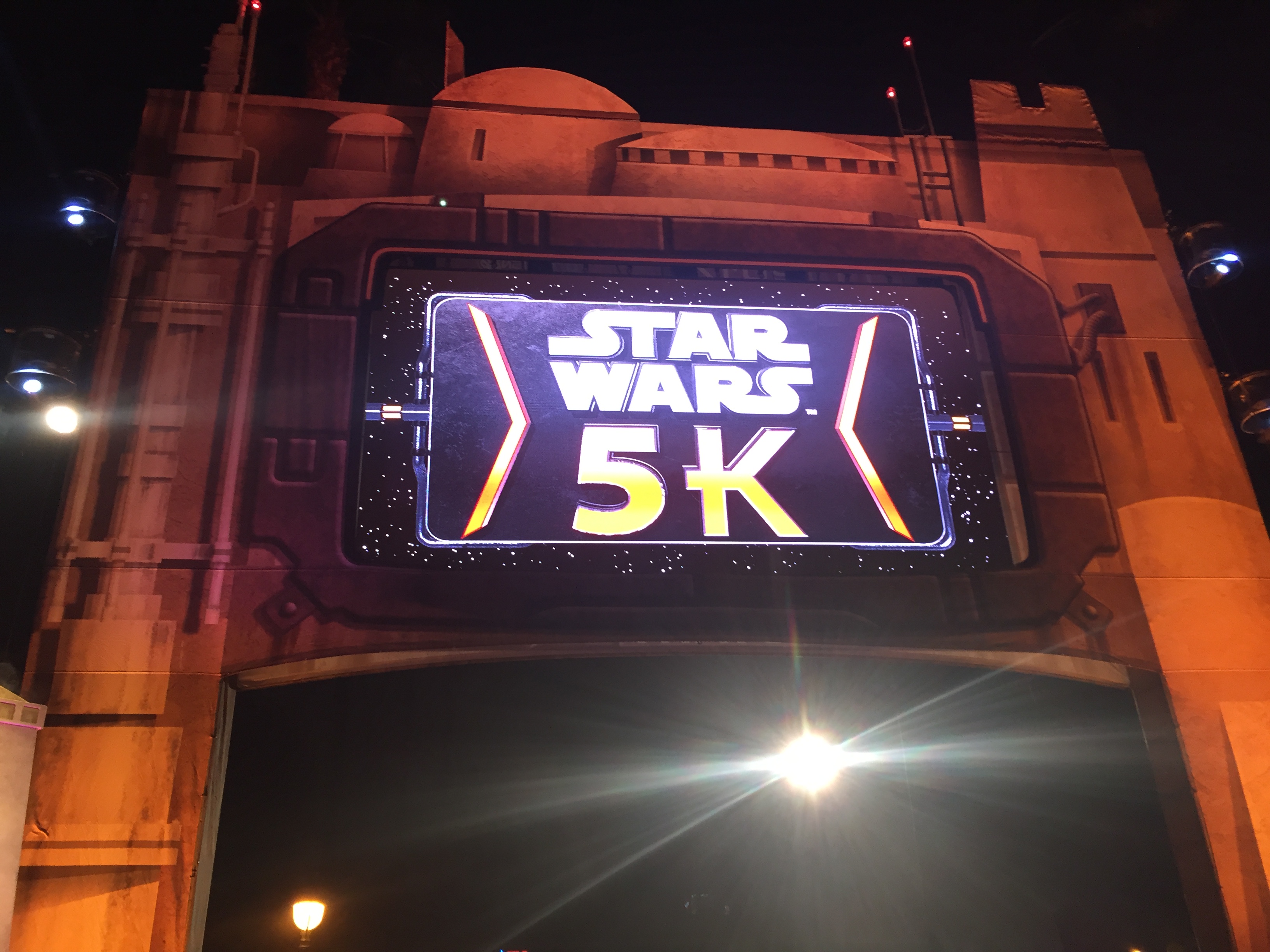 Well, this was a year in the making. My original goal to complete all the Disney races in a year got slightly messed up after getting severely sick after doing the Dopey Challenge the week before. You can read about the setback and how we can (and must) overcome life’s obstacles HERE. This was the last series I needed to complete Disney race in the US. (It took 375 days).

I’ve got to say I do love the Disneyland Expos. They are just so well organized. I hit the merch line a little over an hour early and I was probably around the 125th person in line. You sit inside with wristbands on carpeted floor in the hotel. They then will escort your line down to the area so that no one breaks in front of you. Very orderly and zero chaos and drama. 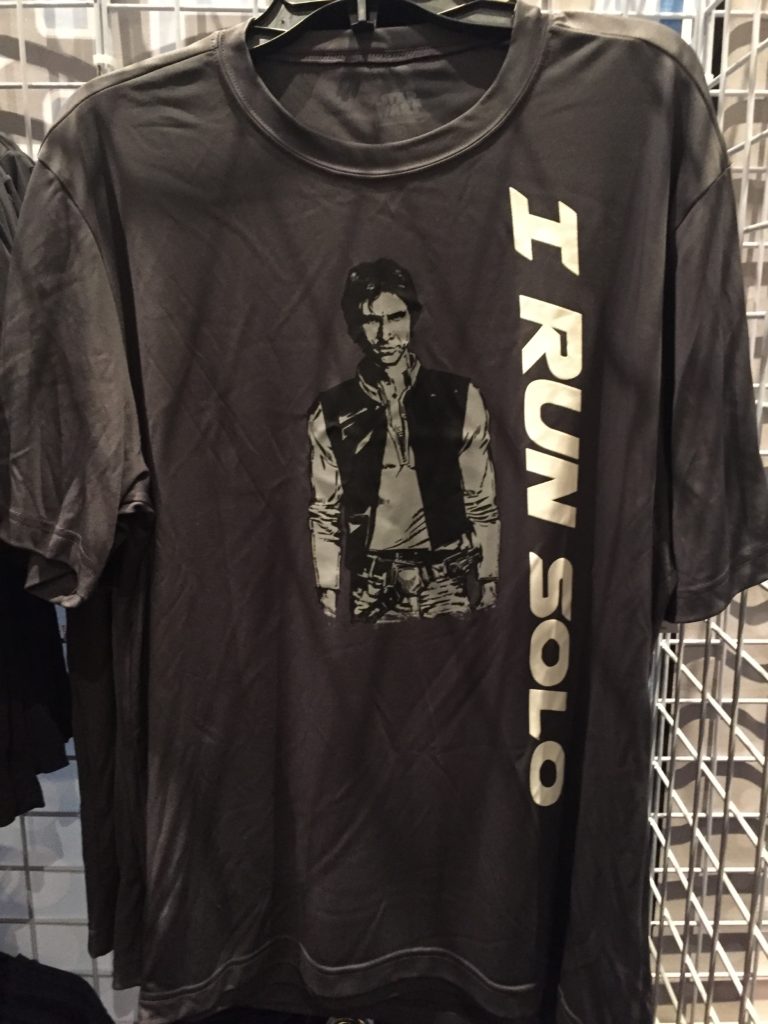 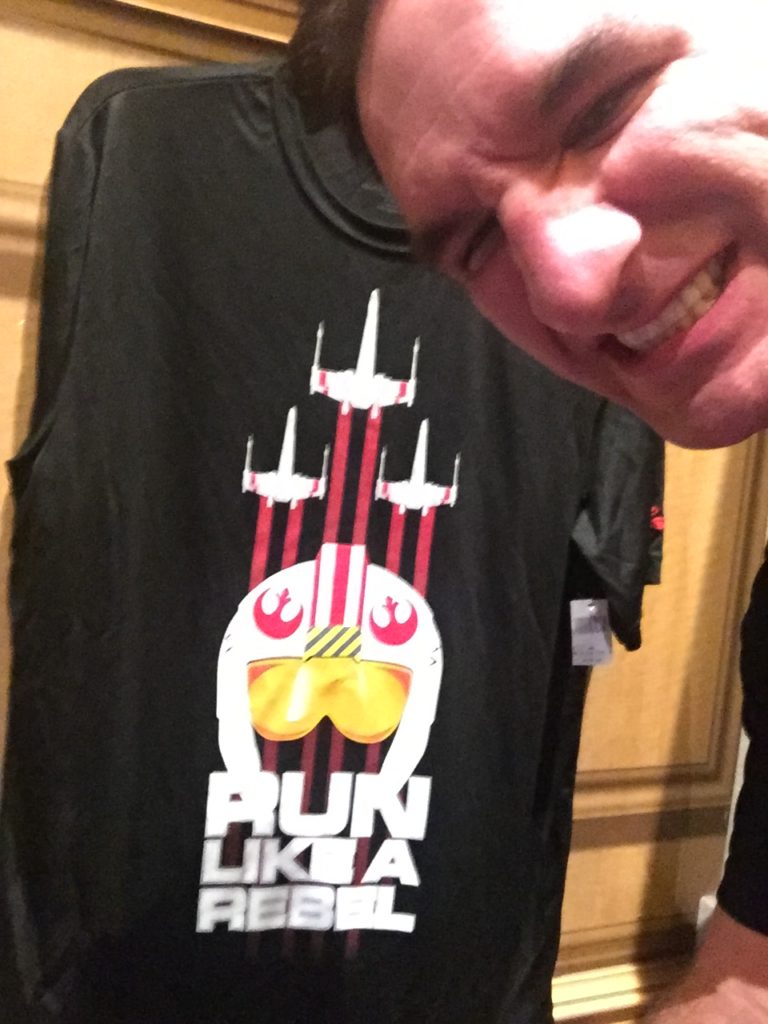 I had to get this one!

There was a lot of cool new items this time around. There were also totally new items like a race specific medal hanger and a race specific ornament. (The ornaments will start being a new one for each series at least through 2017)

I always love the transition area from bib pickup to the shirt pickup. It has a fun red carpet feel to it. I actually remembered to get a picture this time too! 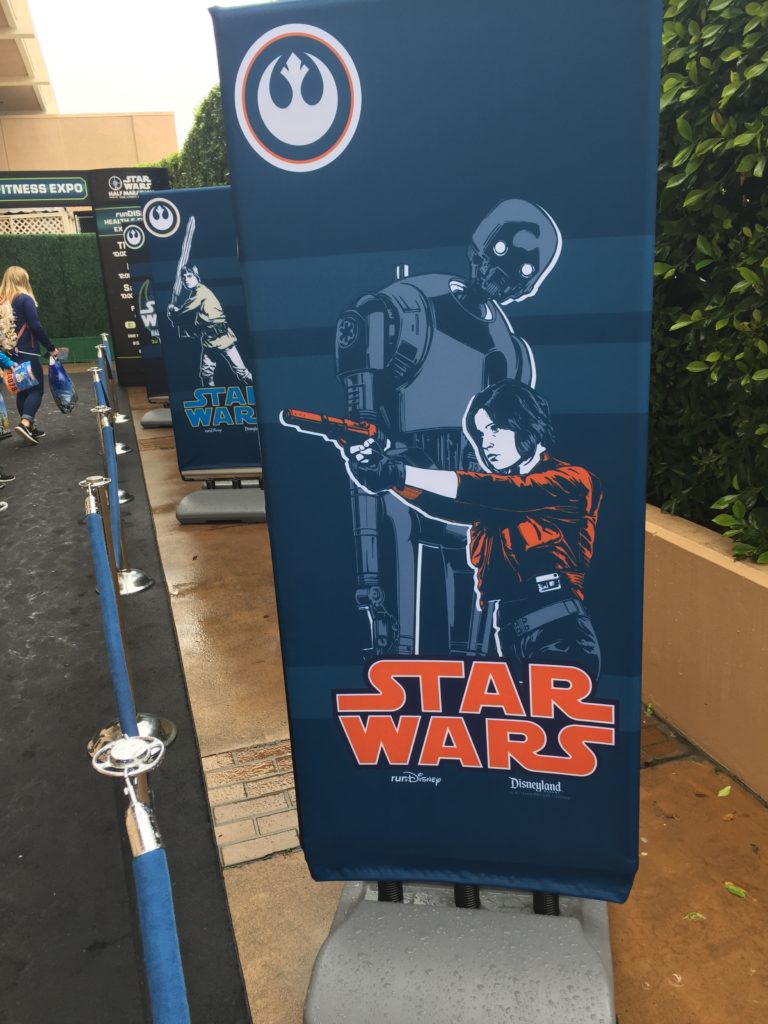 Checked in with Jeff and Barb to see how they were doing. We talked about the crazy weather from marathon weekend the week before. I only got to see them at the Expo then, because I only ran the 1ok and the cancelled-turned-virtual half marathon. No risking getting sick this time! We talked through possibly linking up for the half this series. I’m fairly certain they are both half machines. 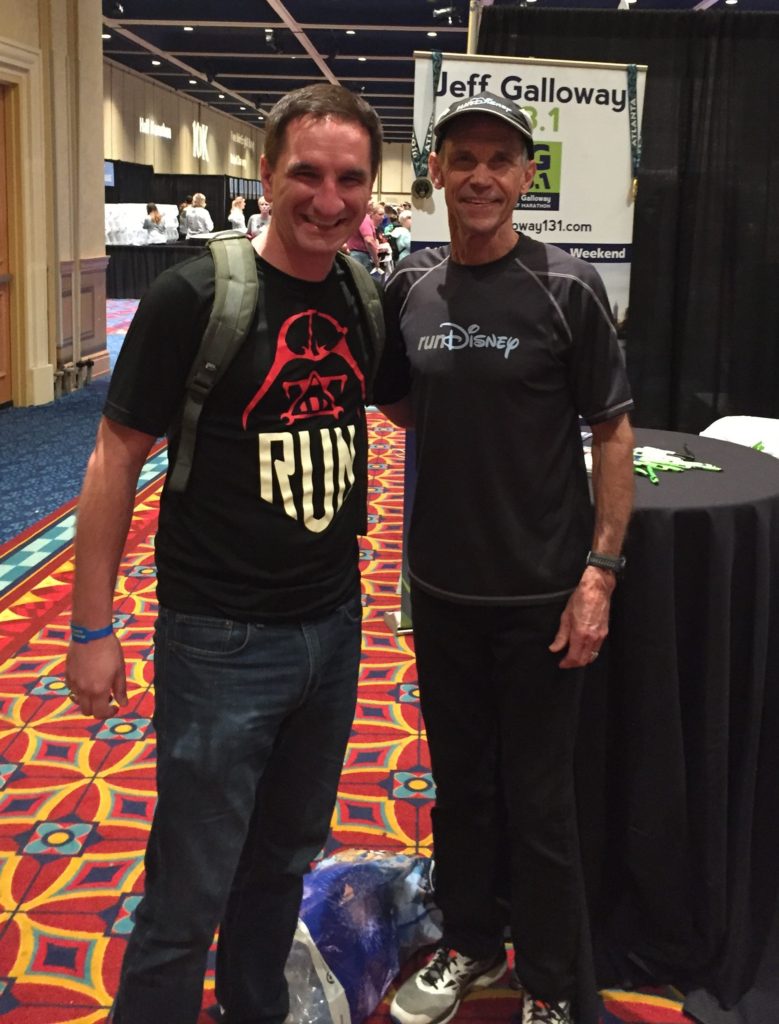 The expo seemed a bit lighter than normal, but that may have been because I was there early.

Bonus tip: If you can make it out there on Wednesday do so. The parks have been empty the Wednesday before the race every time. Add a little rain and you get this…. 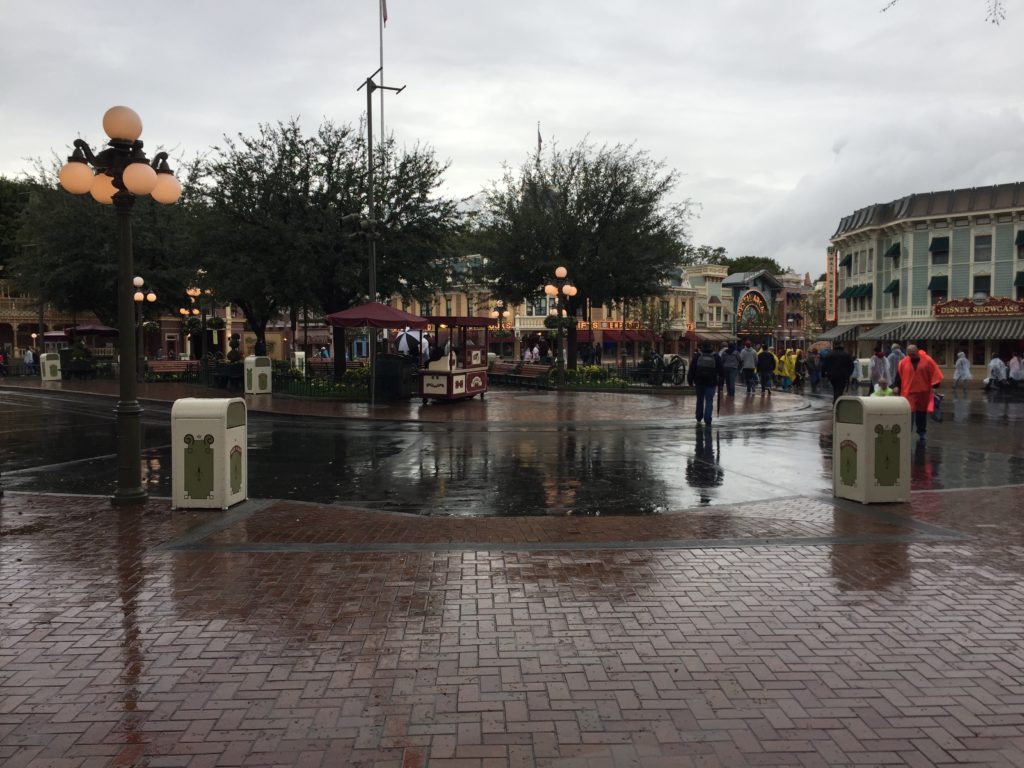 I rode Buzz Lightyear 8 times in a row just as fast as I could walk from the exit back to the entrance.

I was super excited about the 5k. I know DL does not have a great track record for characters on the course, but the theme for this race and much of the signage at the expo was about Rogue One. I’m not expecting anything crazy…. give me a death trooper or something generic and I’m good to go. 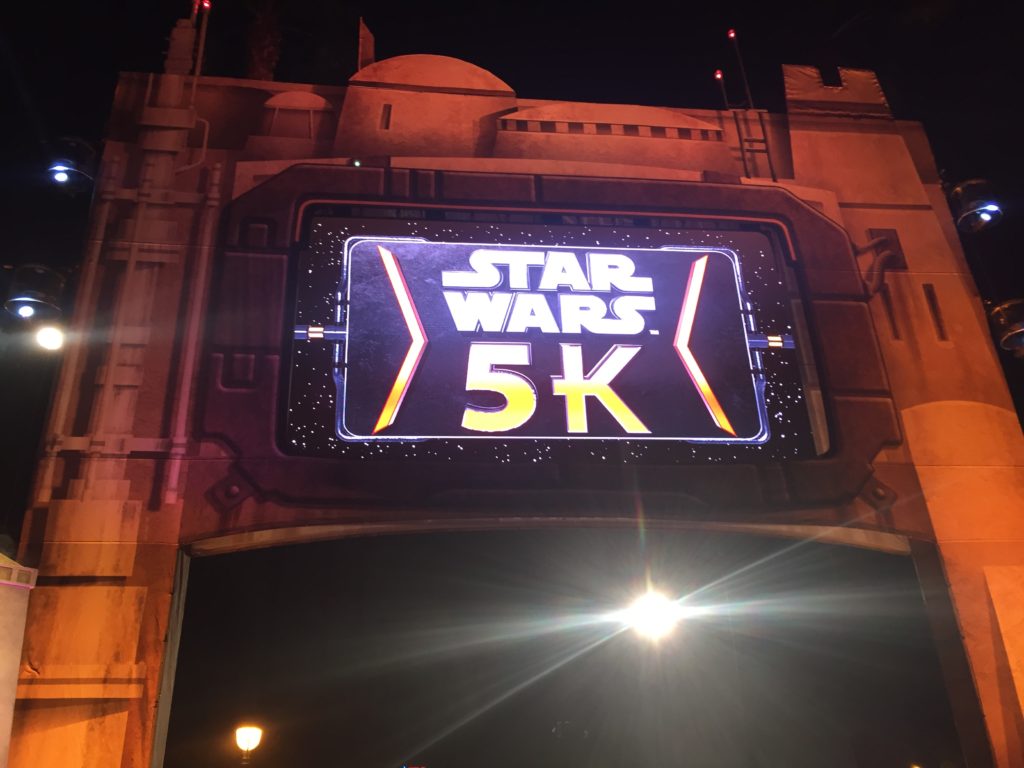 Darth Vader got the race going that morning…and every morning after that. OK, he was pretty awesome in Rogue One, so that sort of counts. 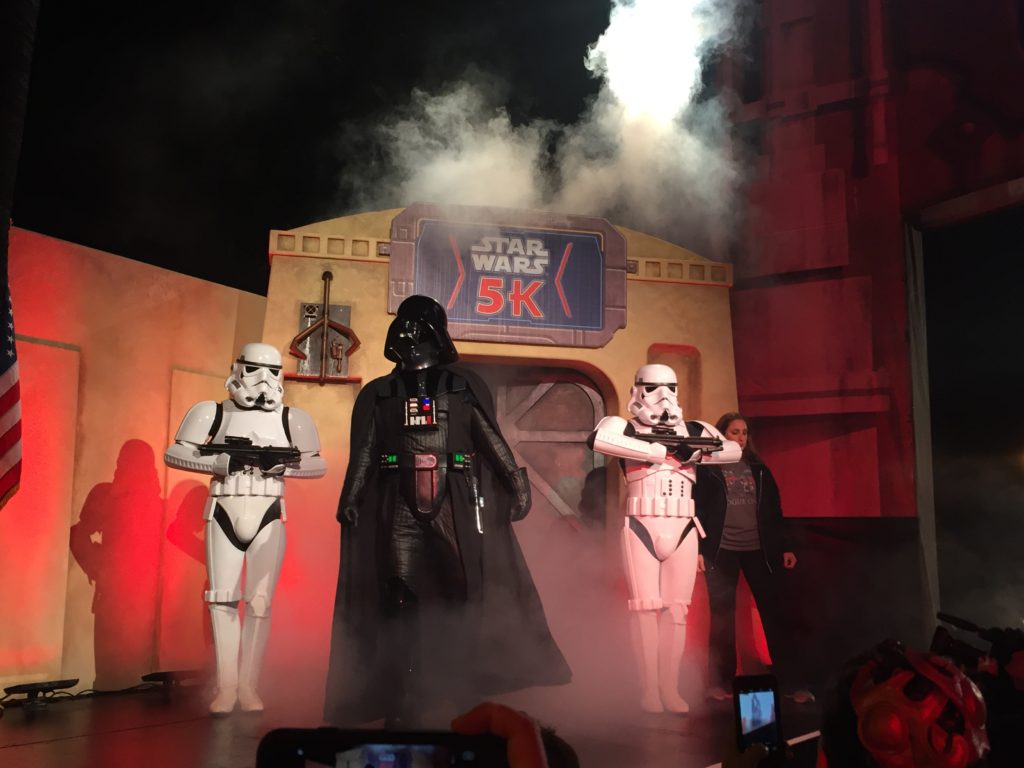 Before you know it, it’s time to get going! I’m still super pumped about the characters and you’ve got to love the 5K course. The whole thing is in both parks. 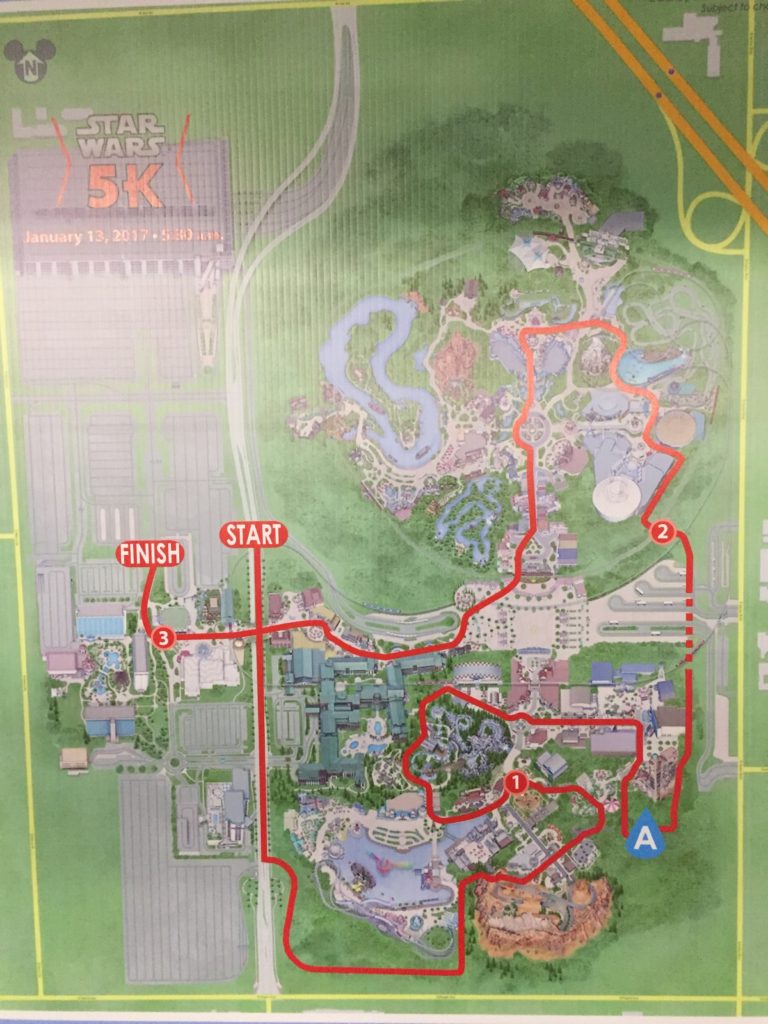 The character stop is right around mile 1. R2D2! OK, he had a cameo in the movie, so that sort of counts too I guess. C3P0 made his appearance after I had been through. He’s also pretty rare now since they don’t do Star Wars Weekends anymore on the east coast. 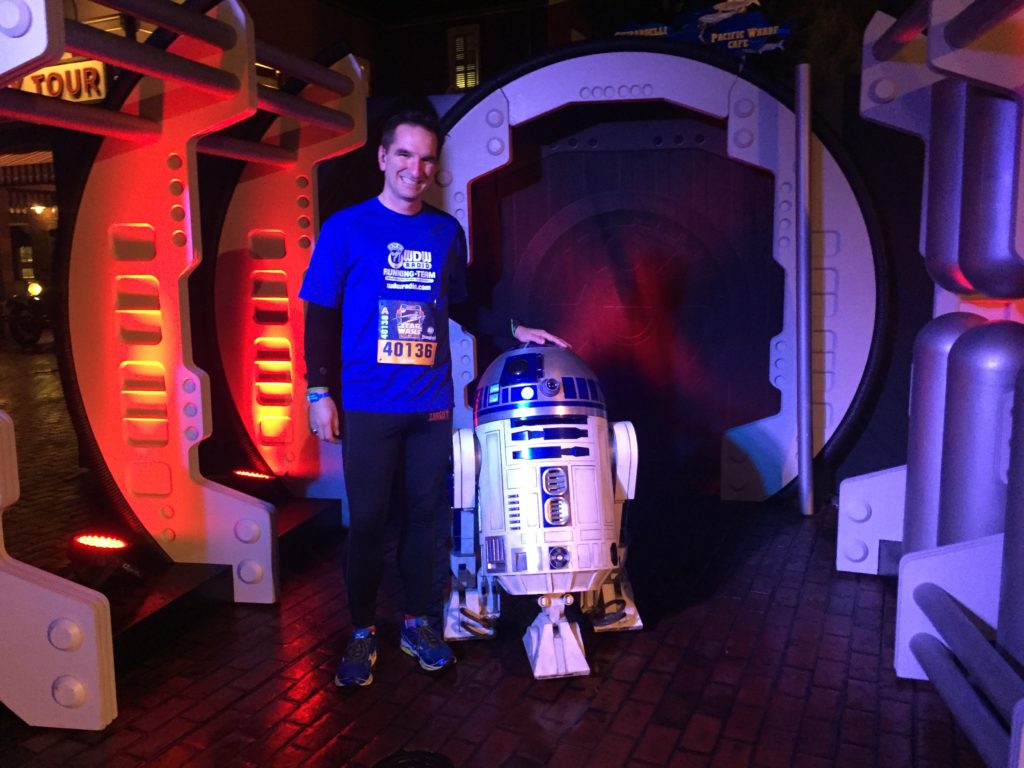 One of my favorite stretches is through the California Adventure. I love it all lit up and empty. They usually have a character or two here, but no stops today. They had some of the people out from Jedi Academy out performing.  At least they had a speeder bike out? 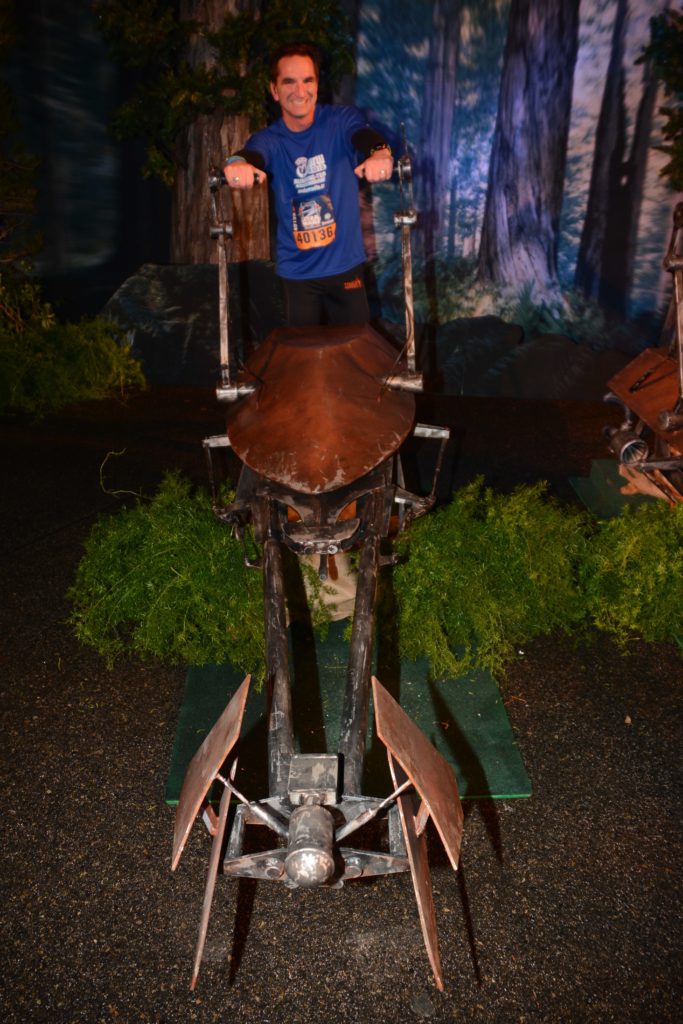 Onwards in to Magic Kingdom and I  was sure I was going to run into someone from Rogue One. Sometimes DL will load the special characters last, I think to help with congestion. I round a corner and there is Darth Vader again. I stopped since he was just hanging by himself. He must of been having an off morning because he talked non stop and none of it made sense. It was actually really funny. 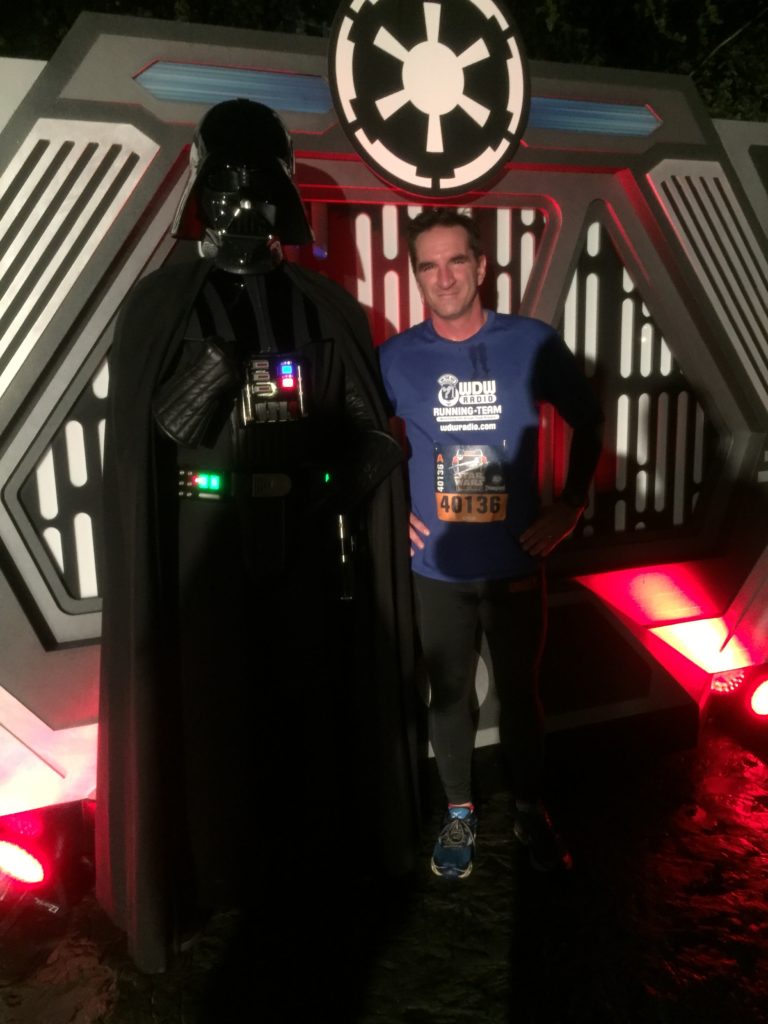 He was still chatting it up at this point.

So soon after this point, I realized that there wasn’t going to be any Rogue One specific characters. I decided to change my focus on another challenge: The Jump Picture. It seemed a competition started forming after my post about how to get great pics at races. Some friends had thrown down the gauntlet at the races the weekend before, so if I could get a good pocket, I would try to answer. Sure enough I hit a giant hole right before the castle. Here’s my reply: 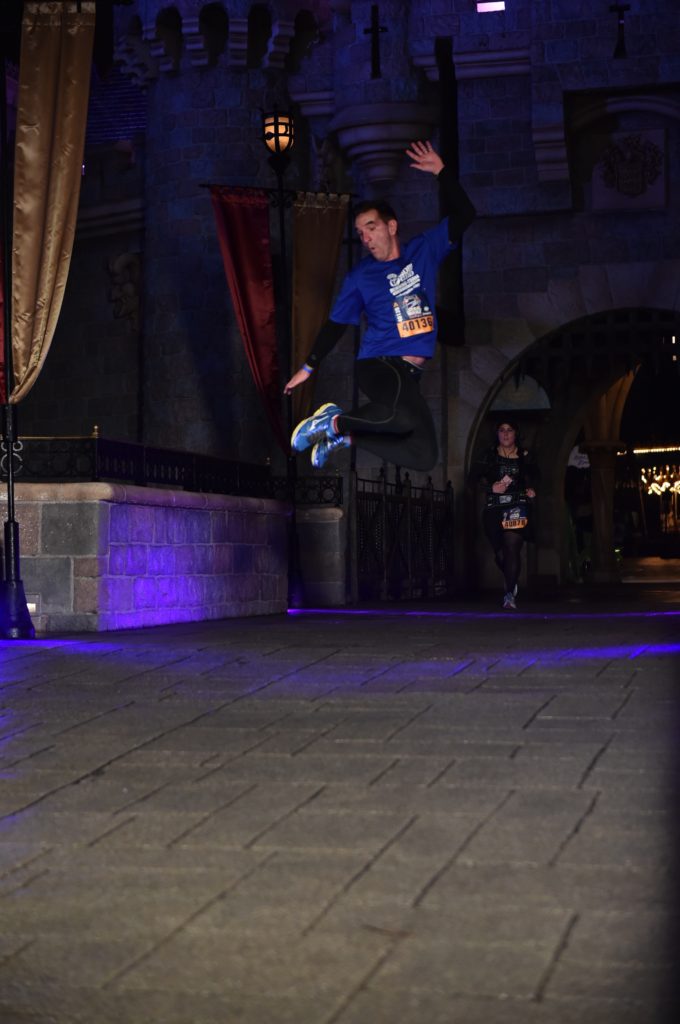 The twist to get the number in was the challenge. Now it’s your turn!

The best stop of the day turned out to not be any of the SW characters but the DL horses. They were great and the cast members were fun. 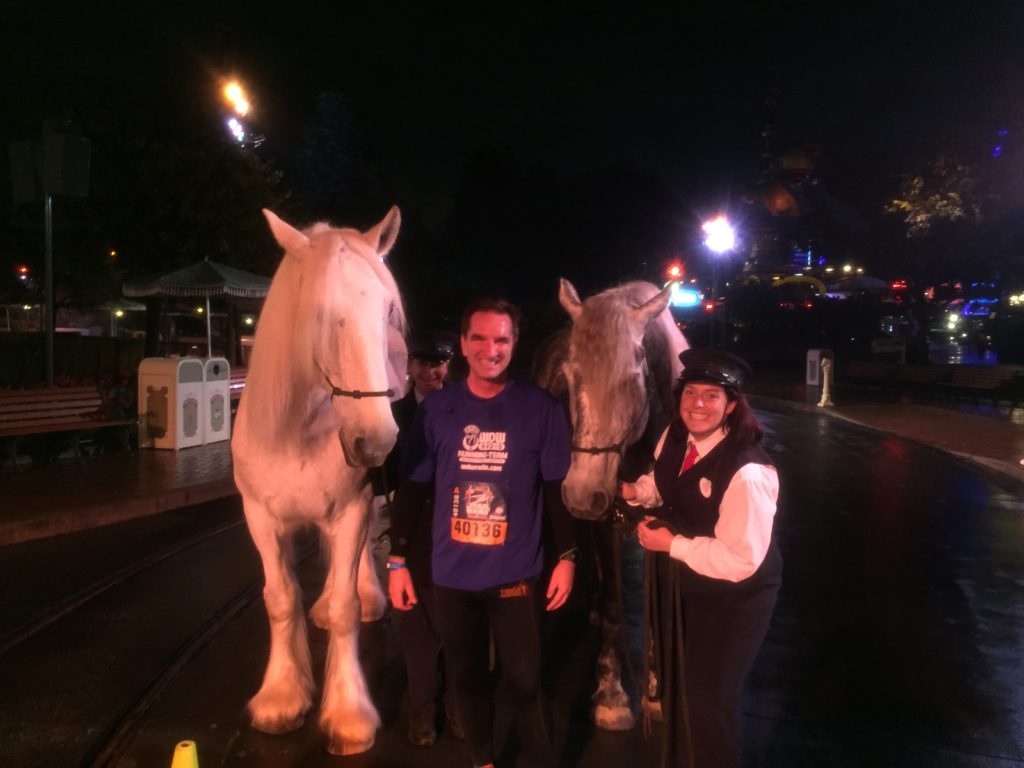 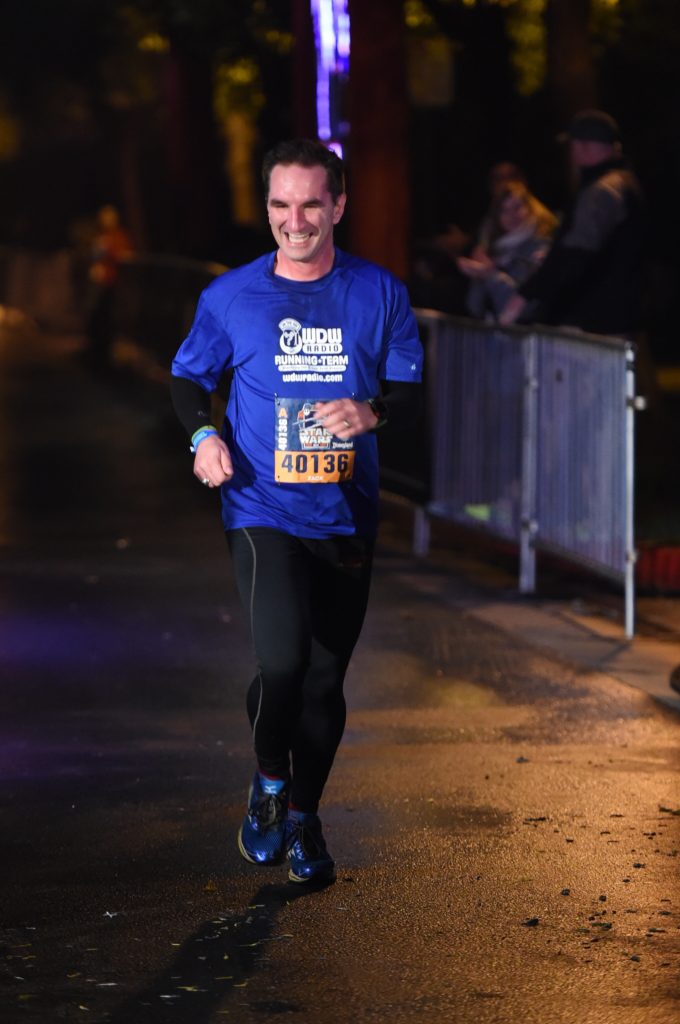 After that is was a short cut through downtown Disney and then to the finish. A great start to a great weekend! 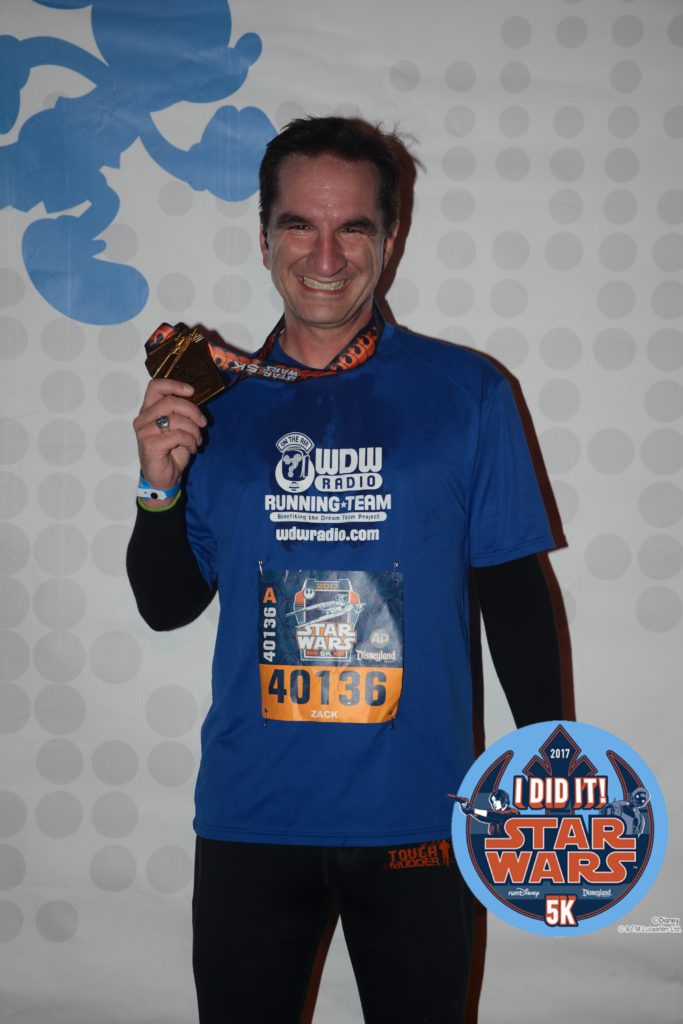 Lastly, they had some great backdrops from the other Star Wars Race over on the east coast. So fun! If you ever get a photo spot like this and the line is backed up before the race. Come back after the run. There will likely be no line. 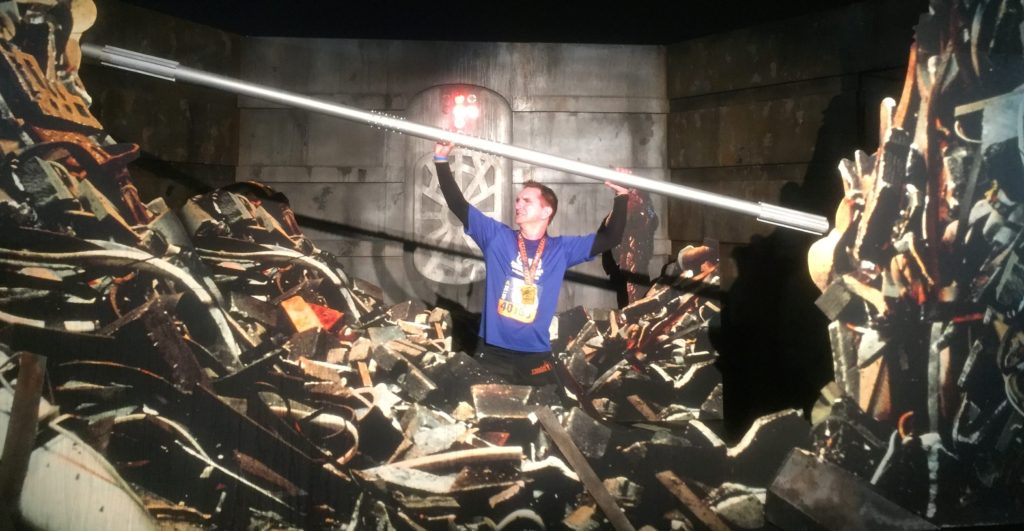 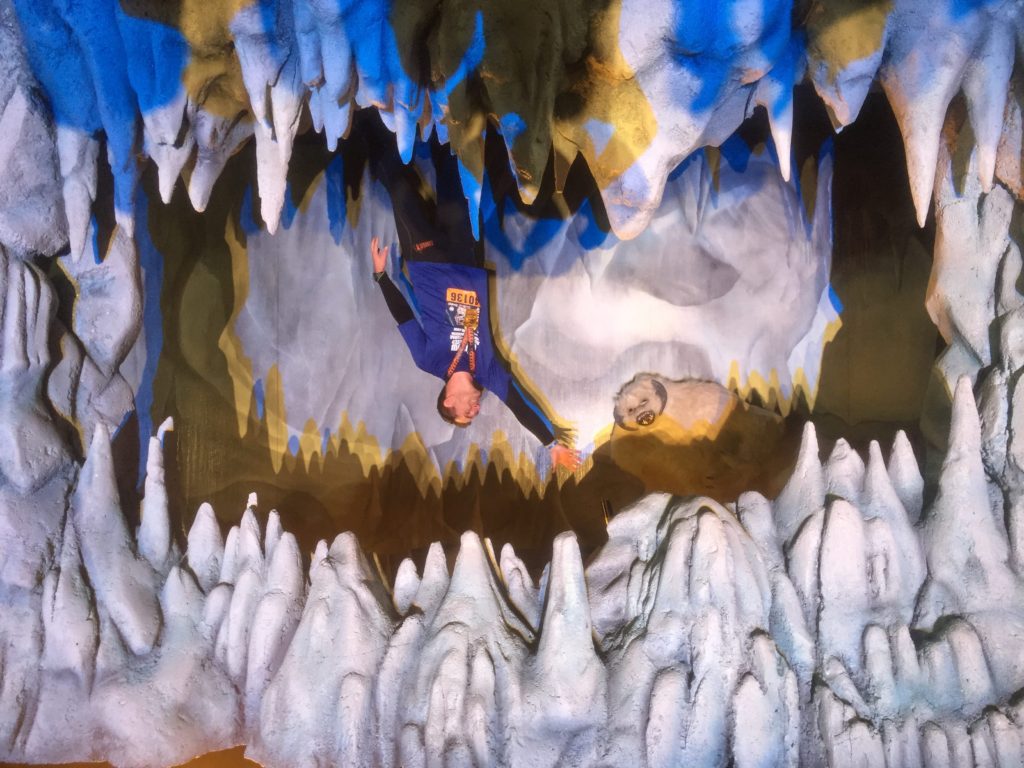 Up next: The Star Wars Lightside 10K and Half Recap!