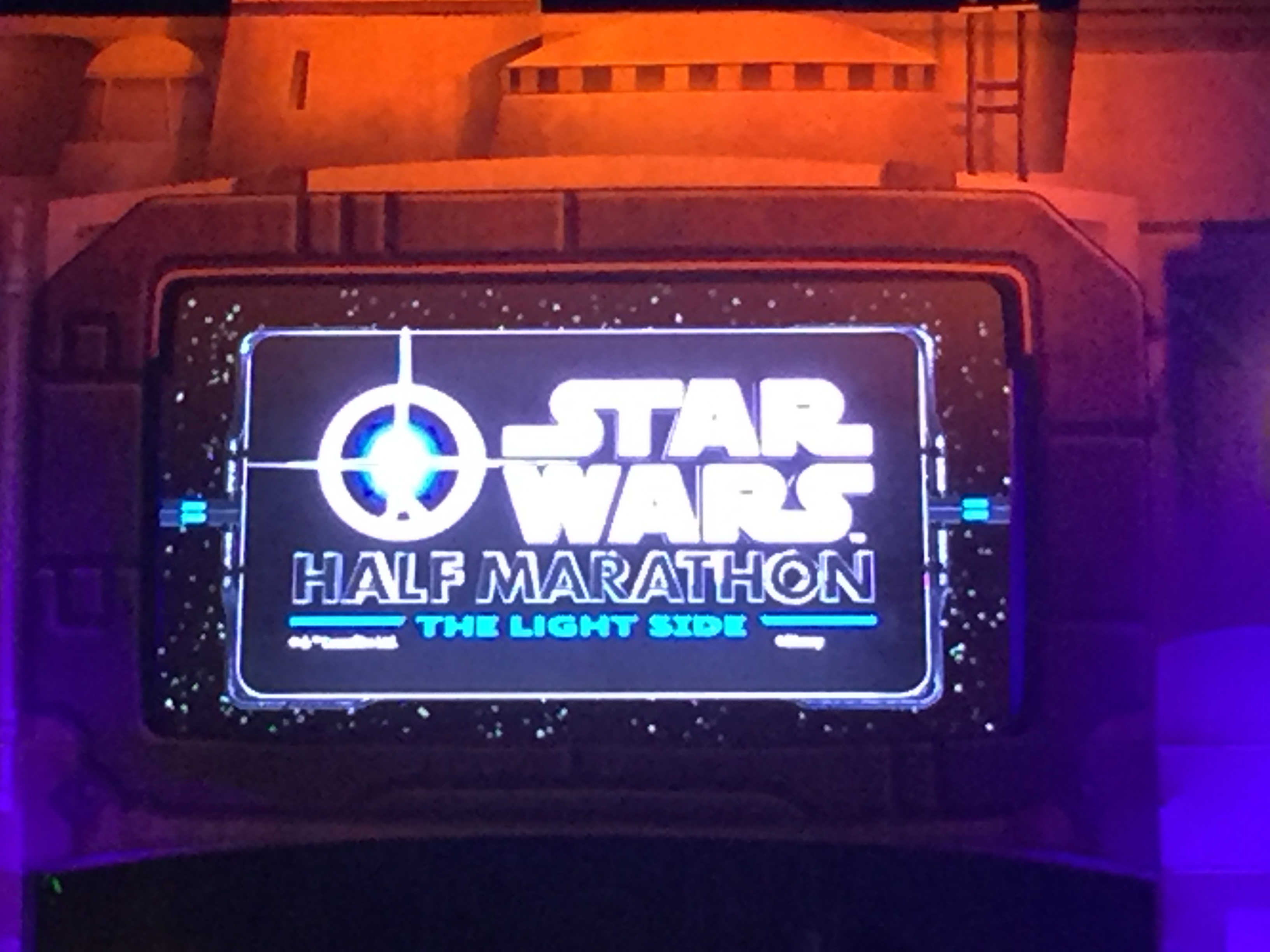 The Force Awakens! So what if the Rogue One 5k had no unique characters on the course. This one had to have some good Episode VII characters right? 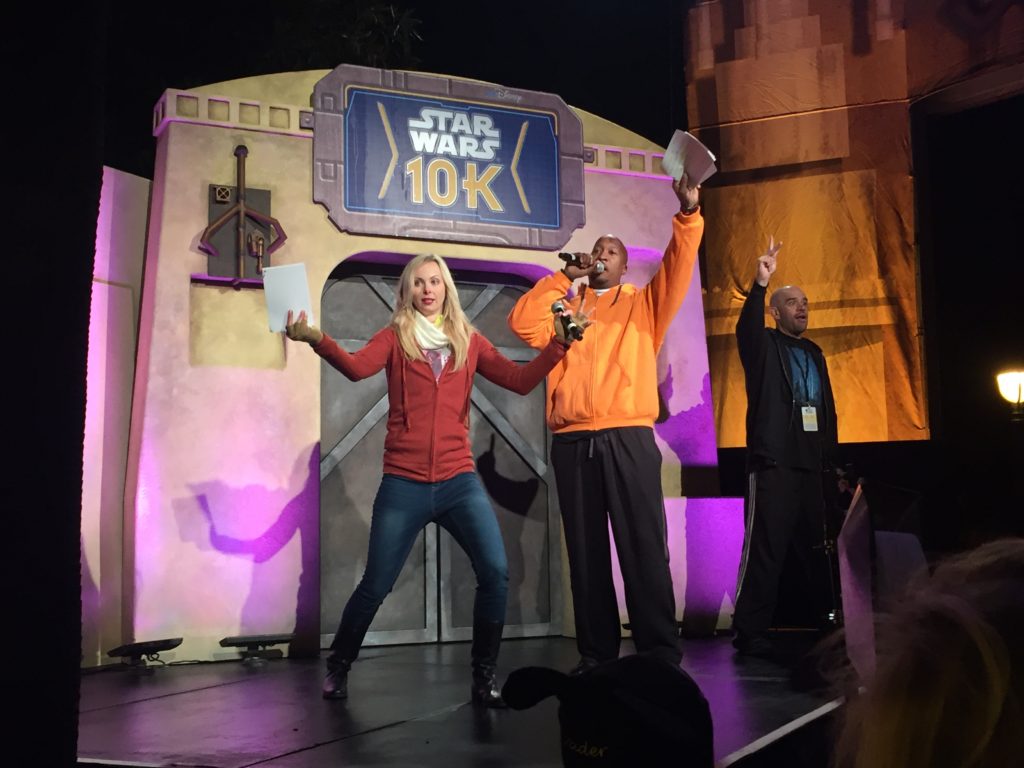 Carissa gets us going for another race and it’s off we go. This race turned out to be a very typical Disneyland 10K. The course is nearly identical to others. It’s still a good course with a majority of it in the parks. The advantage of the 10k over the 5K is that you’ll almost certainly get to go around paradise peer. 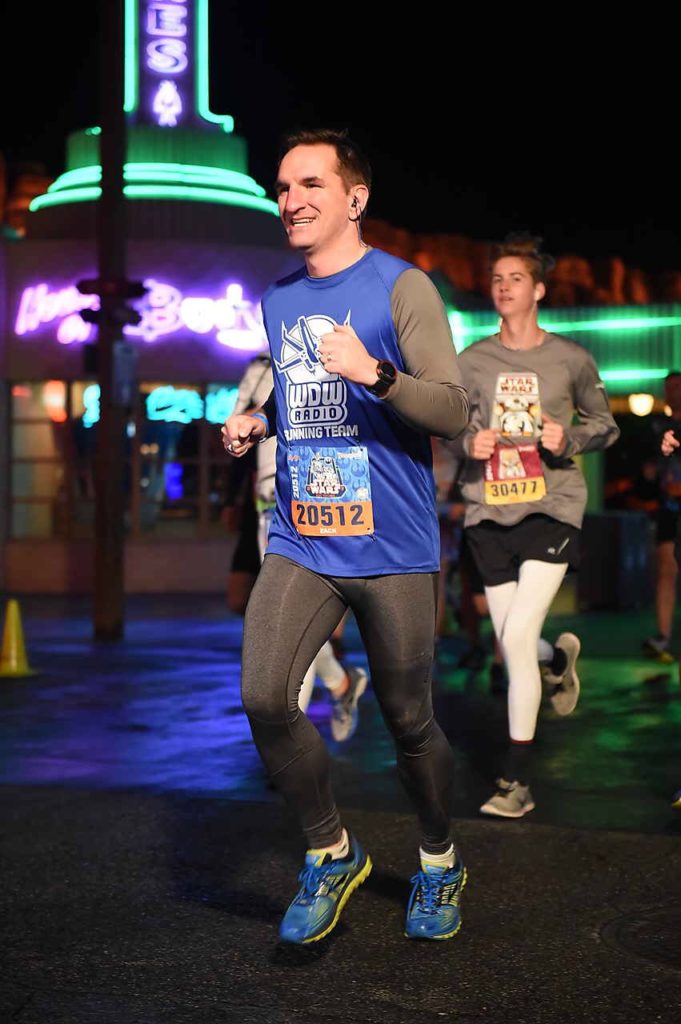 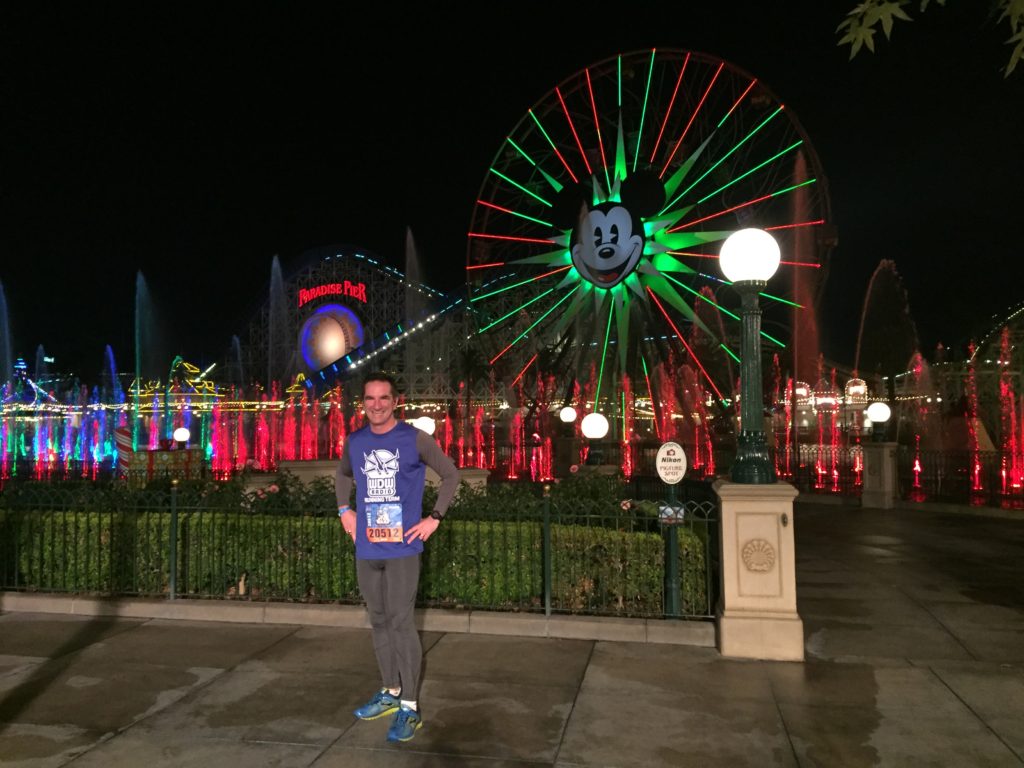 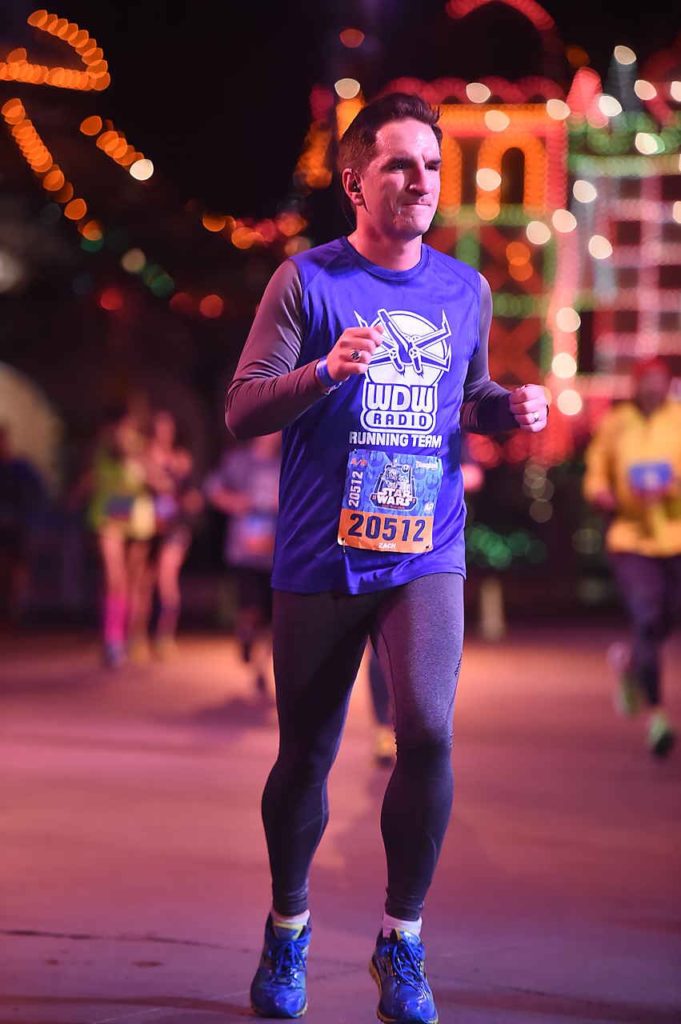 You cut through the back of the park after 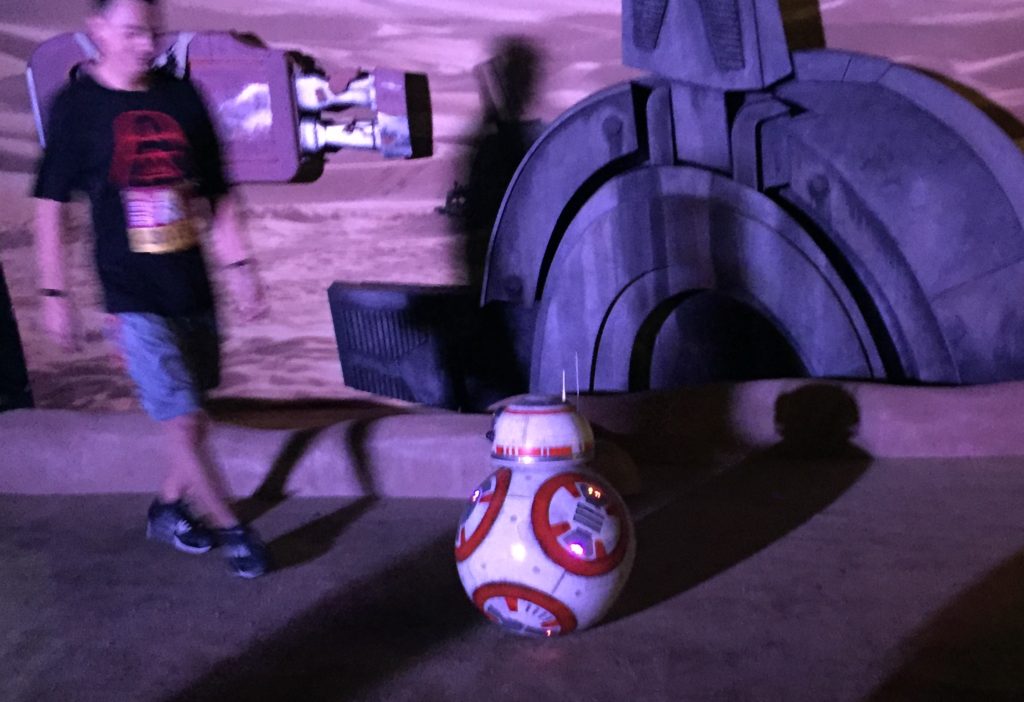 California Adventure and then around back of Disneyland. No character pics? Well I stopped for a better picture with R2. (Missed C3P0 again.) BB-8 was out but the line was crazy long. Outside of that it was the same characters as from the 5K. For the Lightside, it sure did seem like it was more bad guys than good. 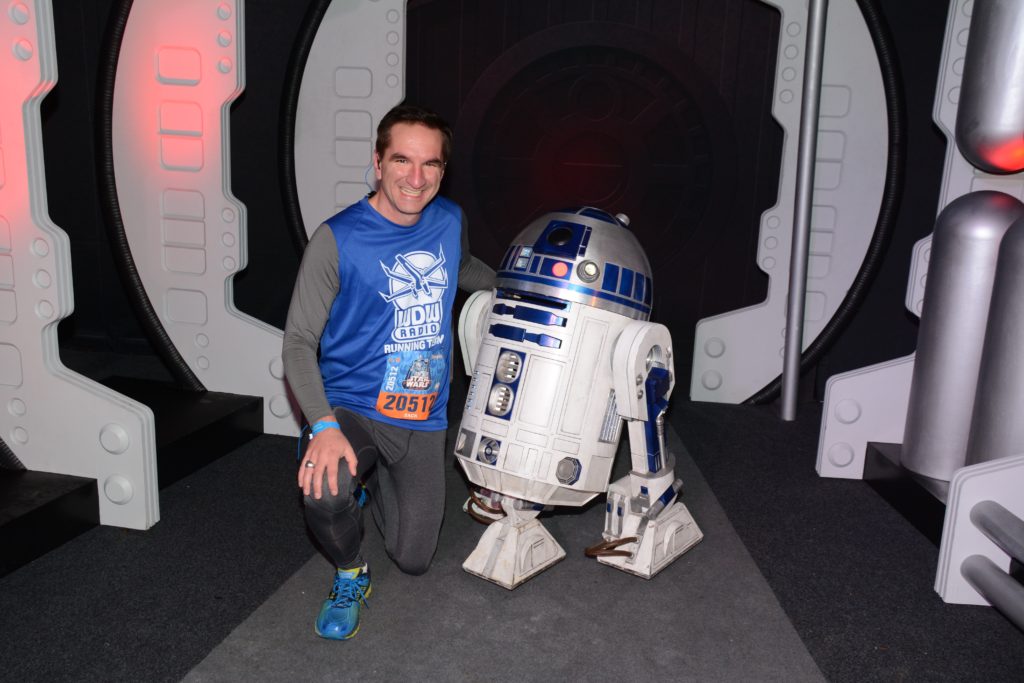 While it’s dissapointing for a character guy not to see a bunch of characters on the course, you can’t beat the scenery. You are guaranteed to run through the castle every race which is not the case on the East Coast. You’ll only get three shots at it all year there and you’ll need either a half marathon or full to get it. 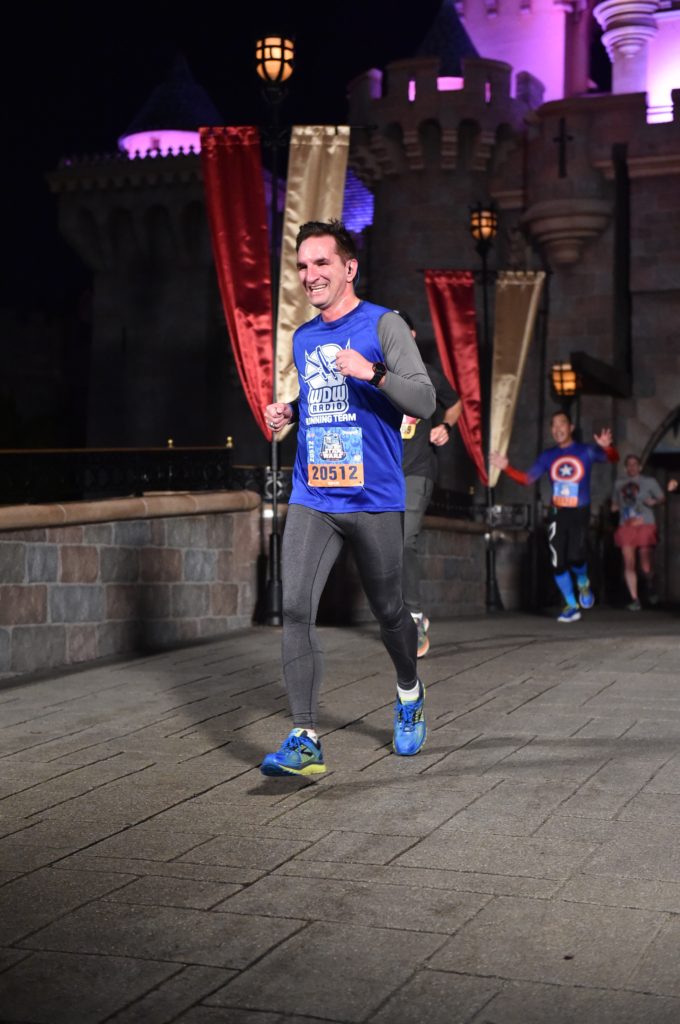 Another great finish! The medal was great too. BB-8 spins! 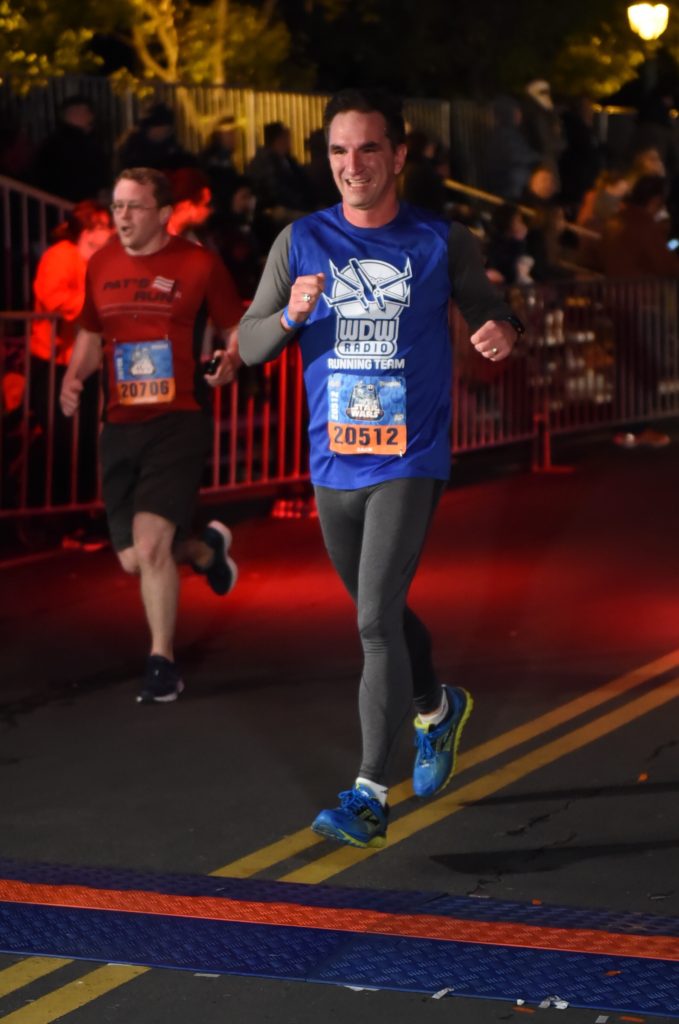 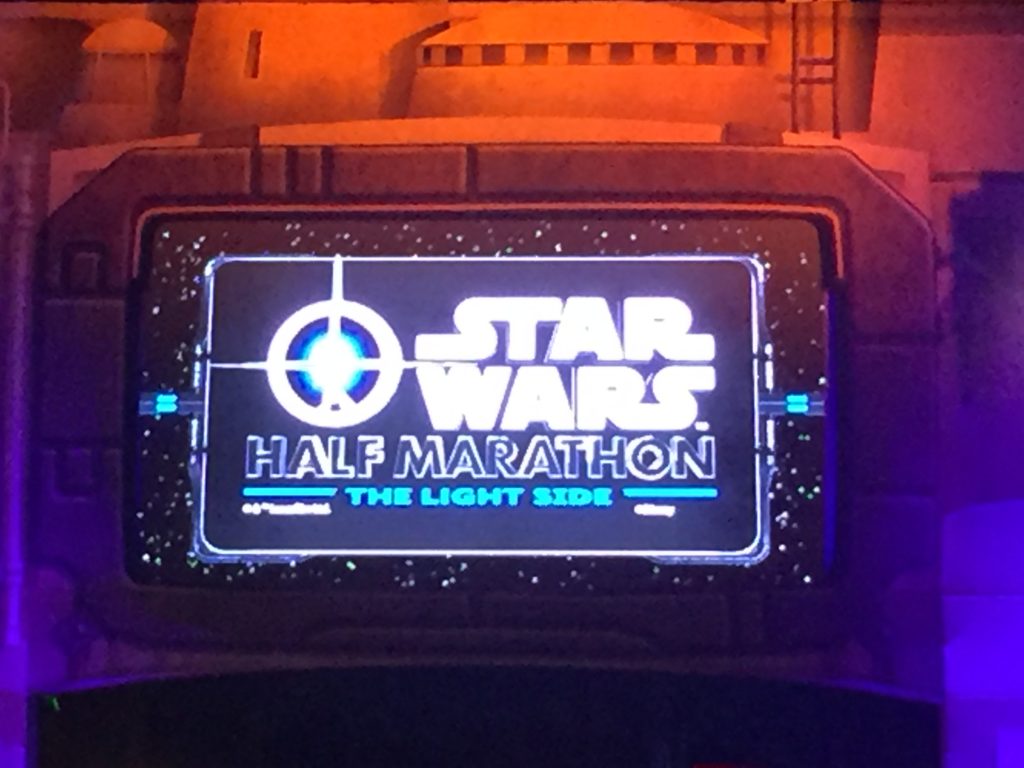 Time to finish of the series!  The plan was to meet up with Jeff and Barb for the half, but I missed the A coral by 20 people. It was going to have to be another chase down.  I’ll just have to implement the run-run-run method to catch up. I typically will slow down a hair in the photo areas, but not this morning. 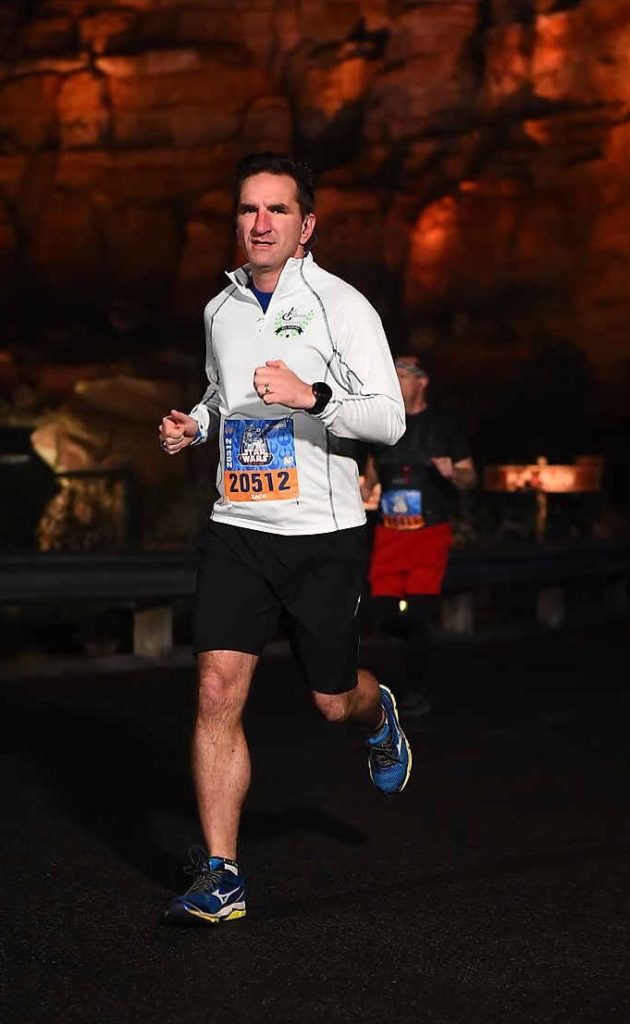 Last time this happened I made a dumb move and stopped for a character. Guess what? I didn’t learn from my mistake. I needed a better picture with them anyway…. 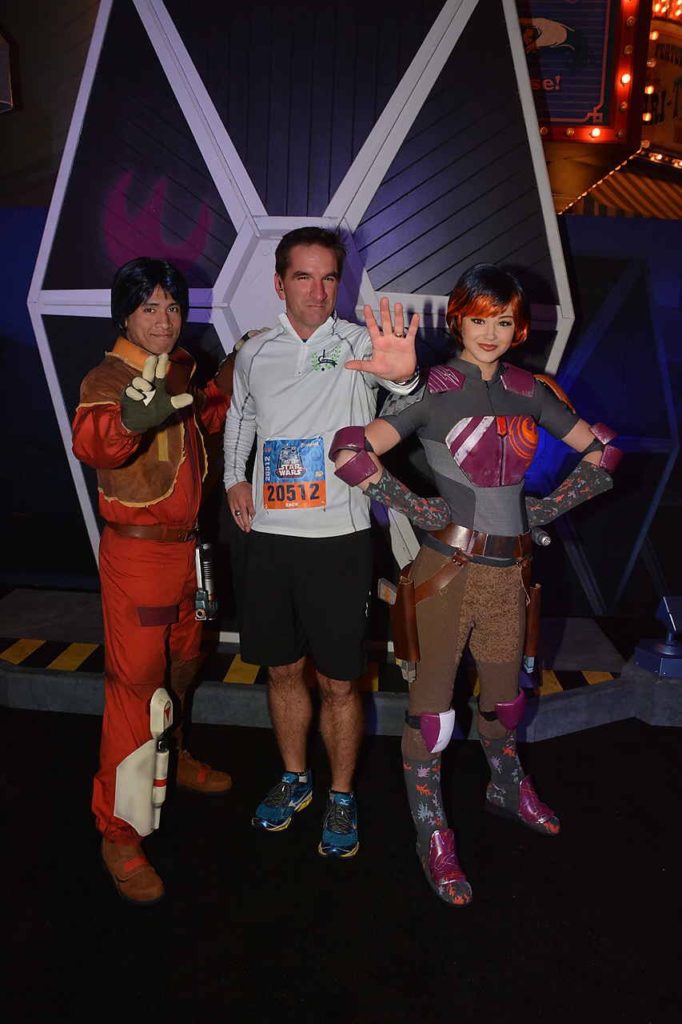 I catch Jeff and Barb a little before the 2 mile marker. I was so glad to see them. We all fell in to a good groove once we were all together. I wasn’t planning on any other character stops and sure enough there weren’t any new ones besides the Rebels characters that I had stopped at earlier.

It was an odd morning temperature wise. It was cold before the race, hot in the parks and cold again once we hit the city. As always it was fun to run in the parks. It also turned in to one of my favorite pictures from all the series. 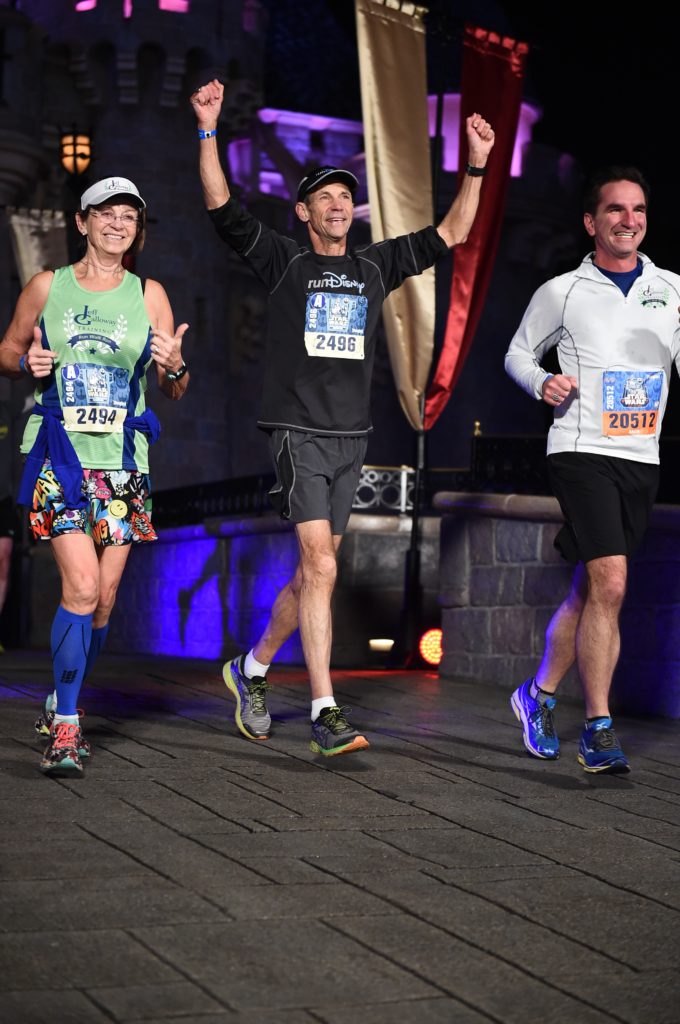 It took a little coordination and finding a great little pocket, but I love that picture. The Galloways have been so good to me this year and friends when they didn’t have to be. So thankful for them!

It wasn’t long until we hit the city. Barb and I talked pretty much the whole time so it made the course go by really quick. There were also a bunch of bands out, so we would make sure to veer in to that side of the road and cheer them back.

I had gotten word that Steven and Millie were going to be out on the course, so I had a side mission to find them and get a picture. They are truly an awesome couple and I really love their enthusiasm and excitement. (You can follow them on facebook @ Cosplay Parents) Mission accomplished! 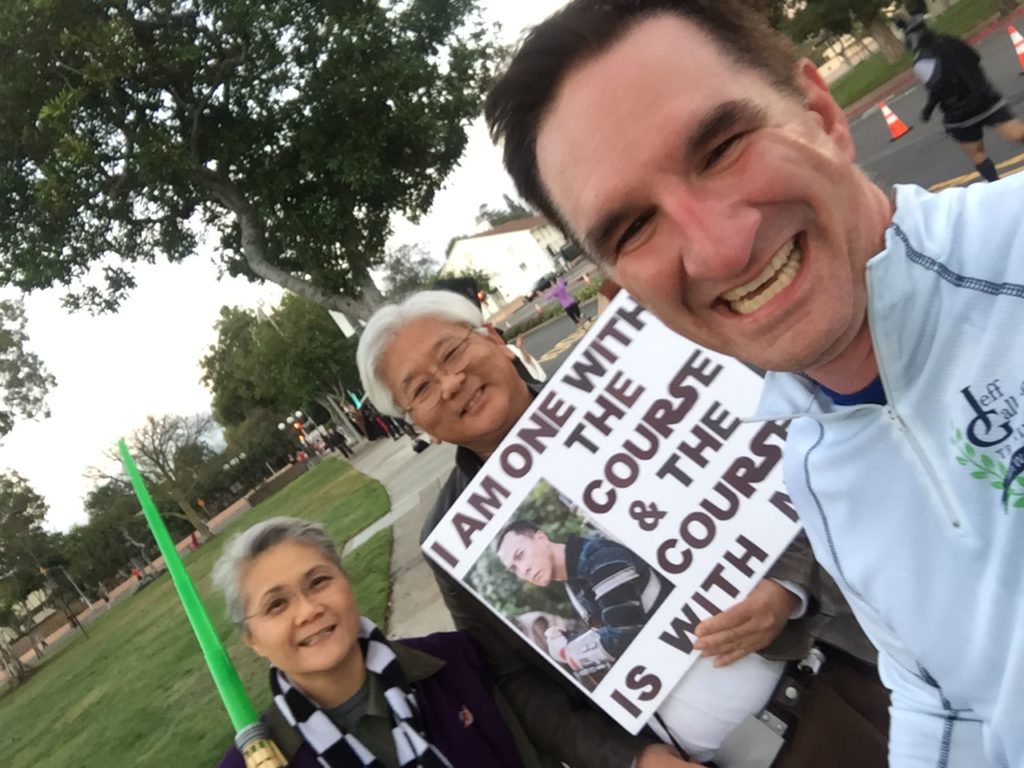 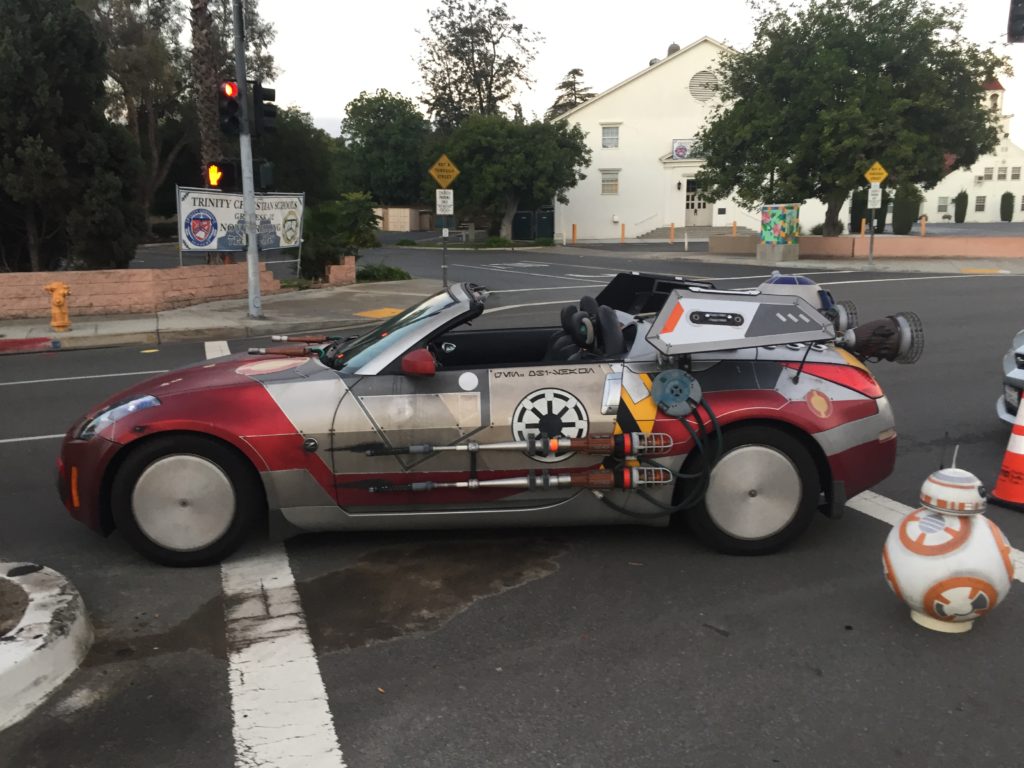 The Cosplay Parents were at the start of what turned into almost a mile of coplayers and bands. They were set up at the perfect spot. Mile 8. It’s typically when runners are getting a bit tired.  Barb and I stopped in for a quick selfie with a few of them. I finally found a death trooper! 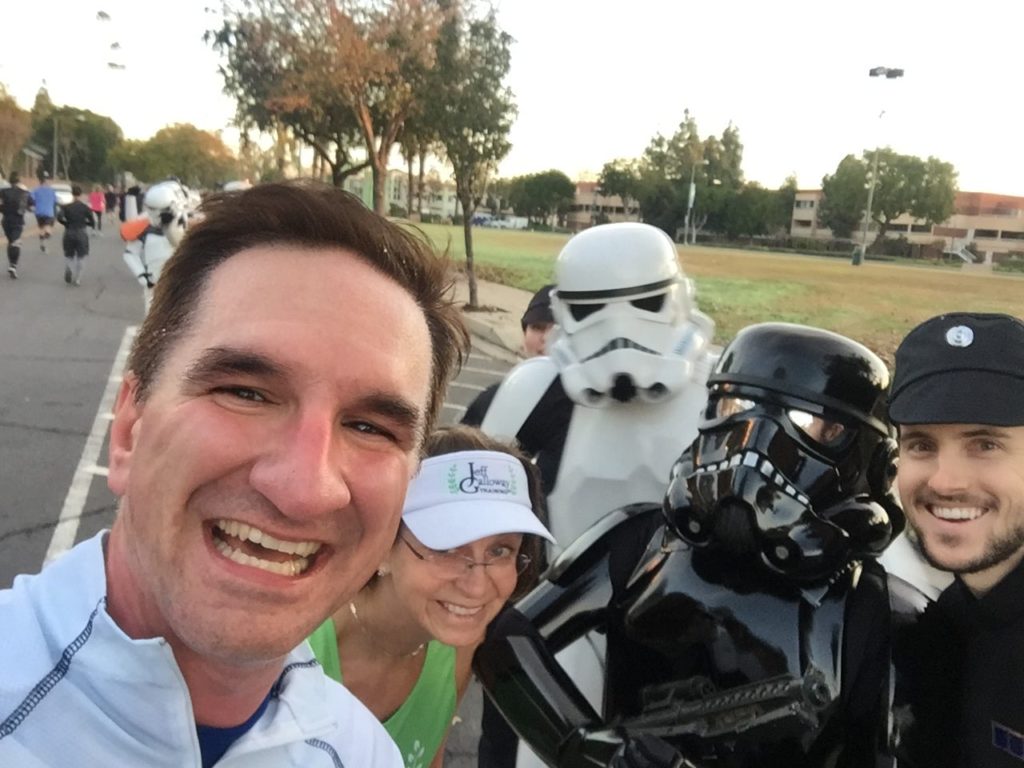 Before we knew it, it was mile 11 and then mile 13. We had a great finish together and Carissa cheered us in. 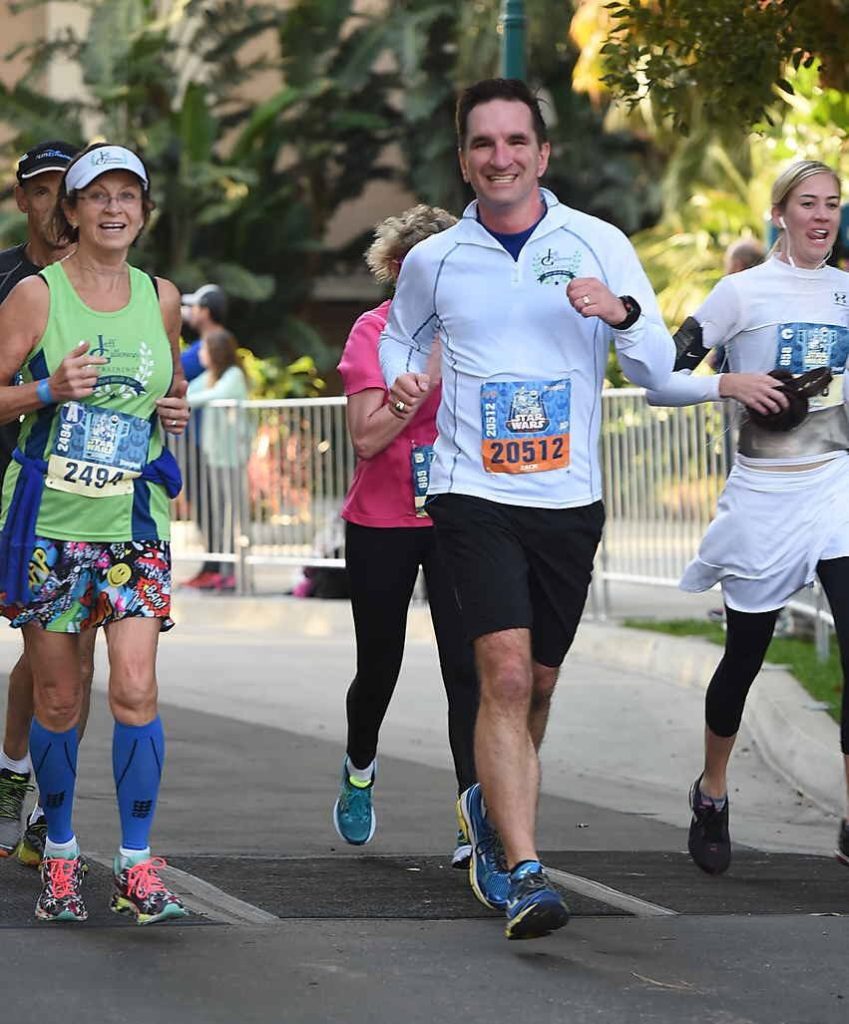 It was then bling time! 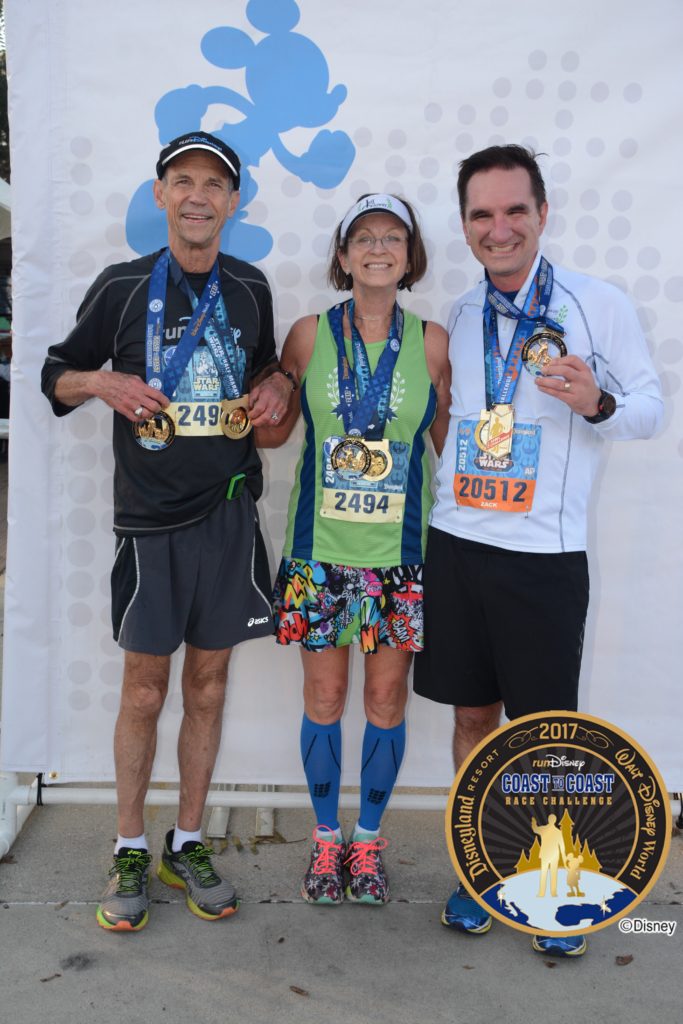 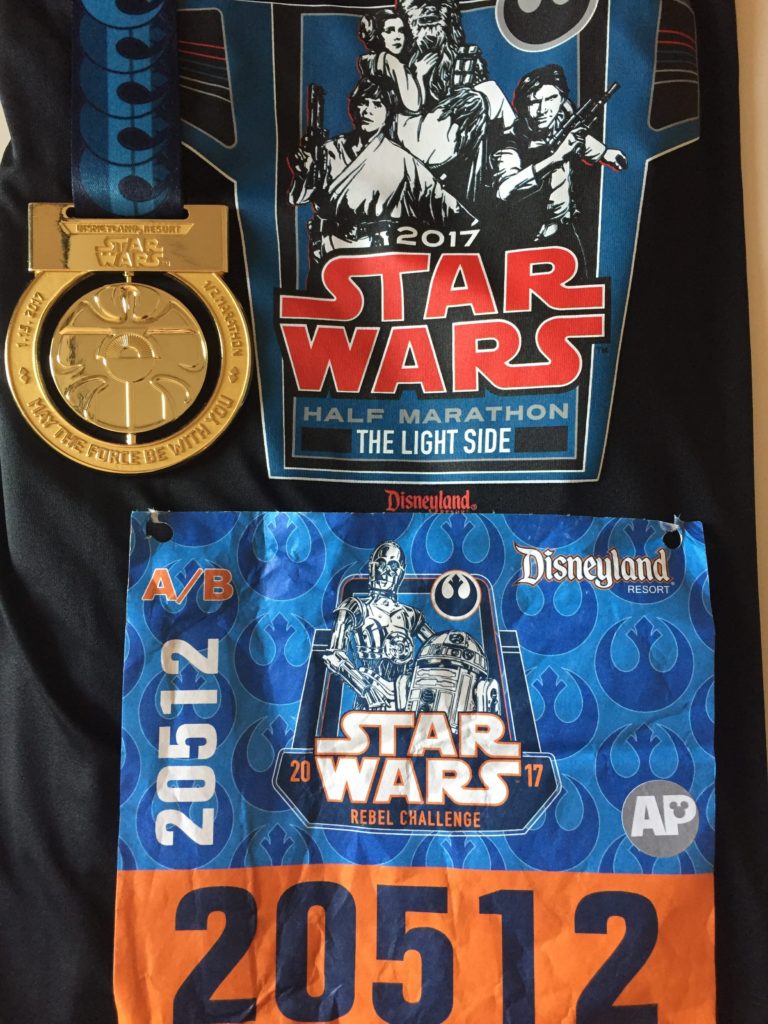 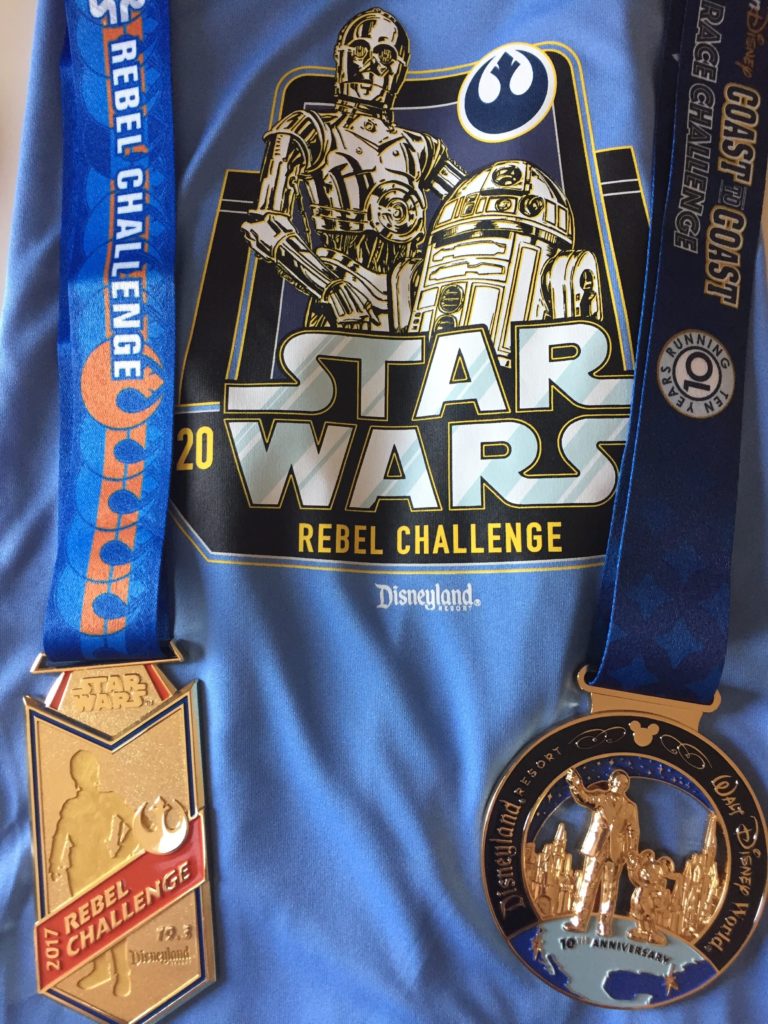 #1 I’ve got to hit the massage tent after the halfs. I usually get man-handled, but this time I get the total opposite. I’m not sure what she did, but it was not a massage.

#2 Hang out with friends! I was so happy to have some friends come out for the race as well. We may live in three different states, but that is the beauty of our running team. 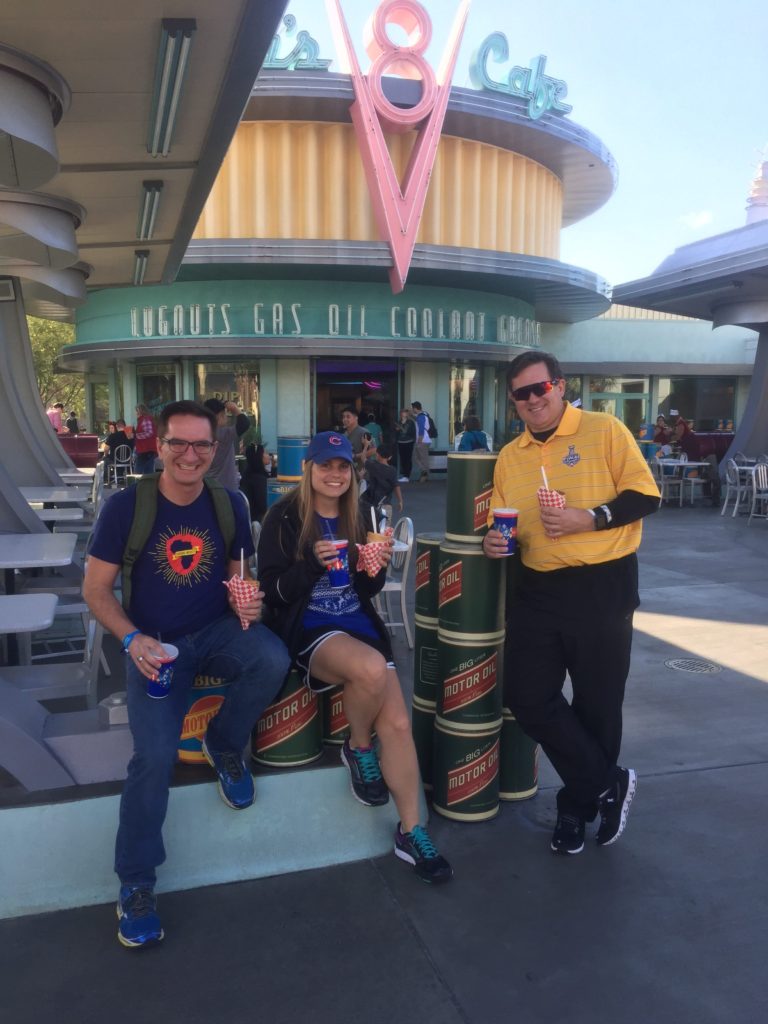 #3 Unexpected surprises. I love surprises. We got one on this trip that I never in my life would have expected. We got an invite to Club 33. If you don’t know what it is, look it up HERE It’s so exclusive, that it was never on my Disney bucket list, because it’s that hard to get in. Thank you to our special friend!!!!!! 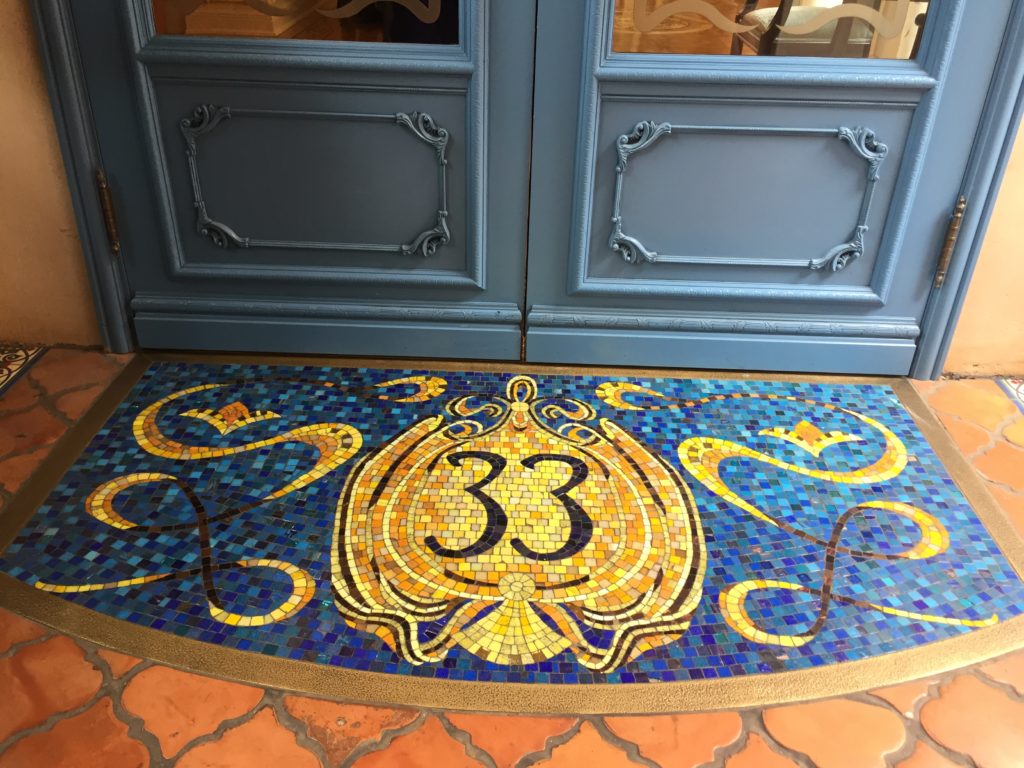