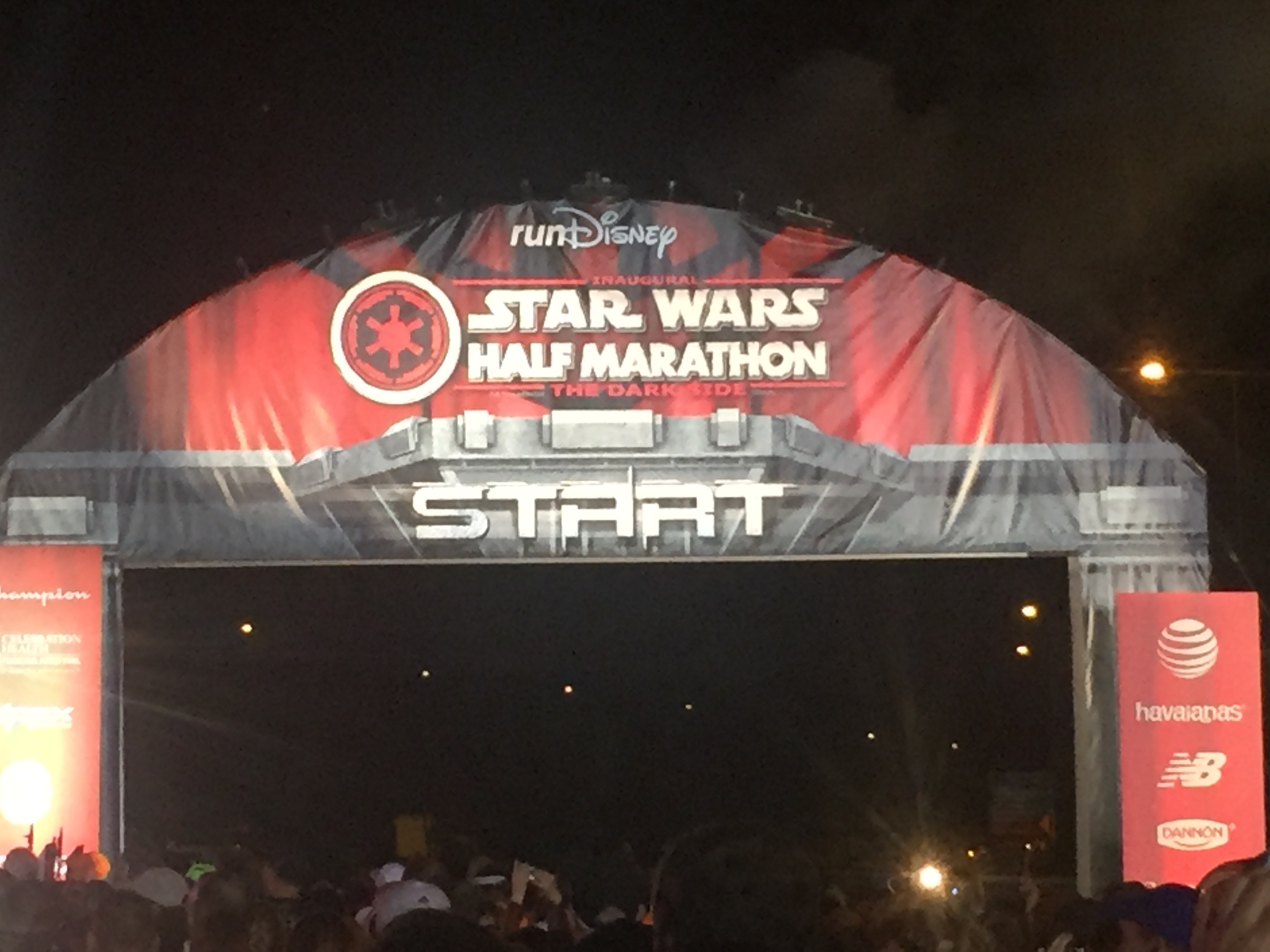 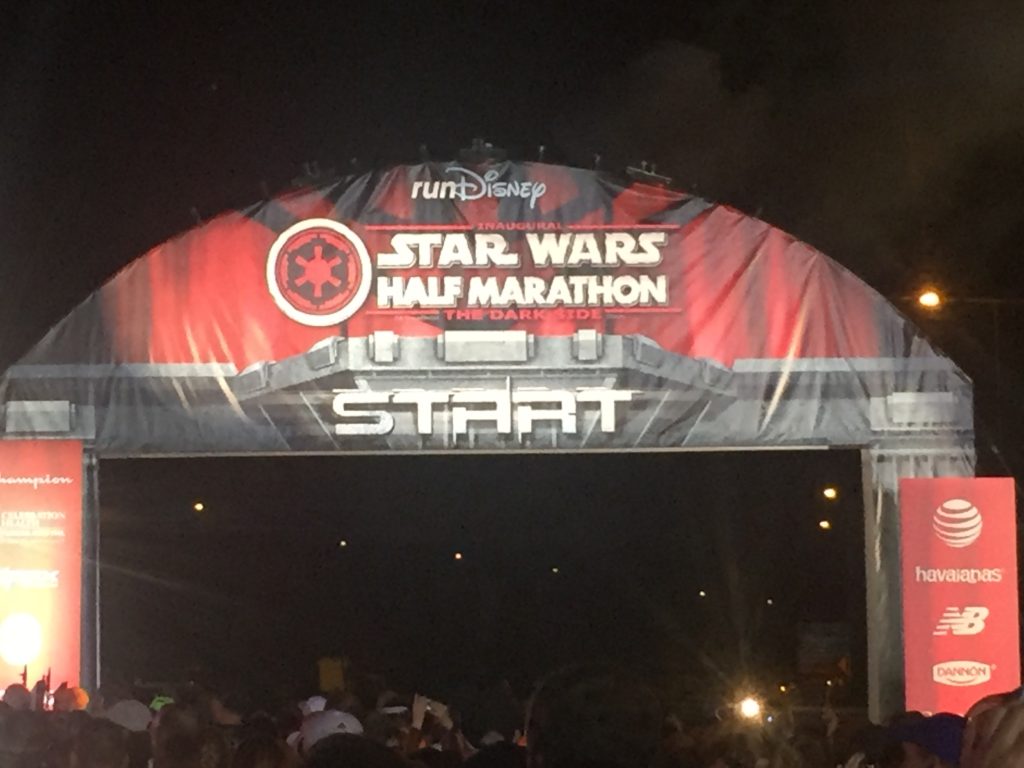 The WDW Radio Running Team is genuinely one of the best things that I’ve encountered during my years of running. It’s a great group to be a part of because not only do you build relationships with people all over the country, but the team also raises money to send families dealing health issues to Disney World.

We have a philosophy of togetherness and support each other in our different running styles. Some of the team runs for time. (And have placed in the top spots before) Others like myself run fast so that we can get a bunch of pictures and character stops. Others run in groups for the social aspect and to support their friends on the course. In the end we all wear the Lou blue. 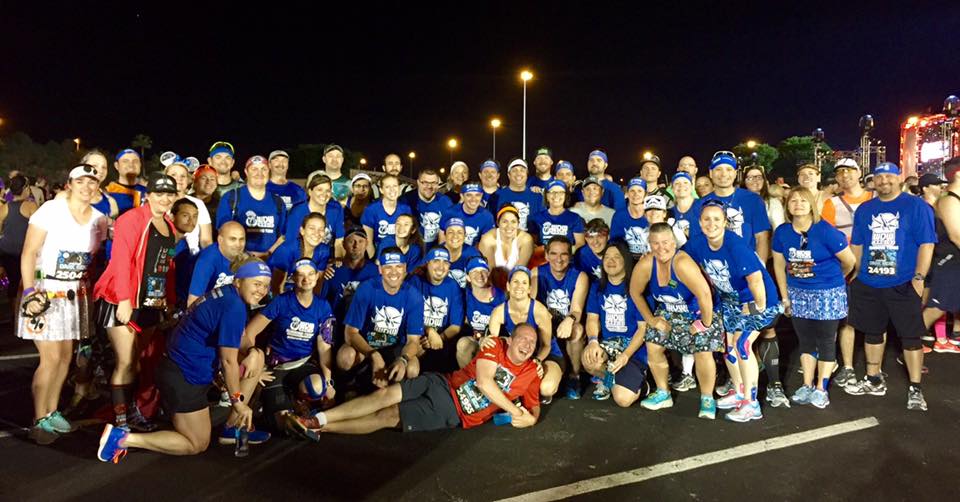 Today I was nearly certain that there were not going to be any characters that I needed, so I decided that I would enjoy the race with a group of my friends. I’d never run with a group before and was actually a little nervous that I would somehow slow them down. I ended up learning that there was a whole different experience that you can have at these races.

Off we went to conquer three parks and ESPN before breakfast. There wasn’t anything going on differently in Epcot and they had very few photographers out here for some reason. R2 and Chewbacca were still manning their spots on either end of the park. Most of the cheer squad from yesterday was either running or had other obligations, so it was up to Valerie to hold down the fort. She was awesome out there cheering the group on!

Next, it was on to Hollywood Studios where there were none of the 501st greeting us today.  They did have Kylo Ren talking on the stage and some good photographers out. I love the picture below. We were all in the zone evidently.  (I’m also a big Frank Hart fan!) 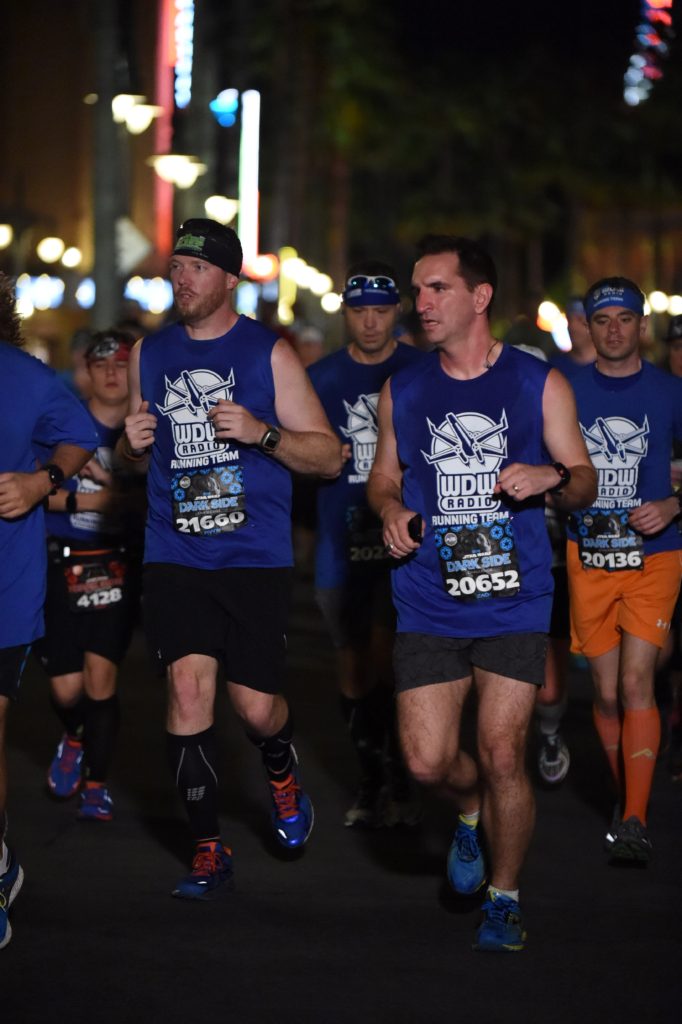 They did have the 501st tucked back in toward the exit of the park. This would be one of two areas that they were at. 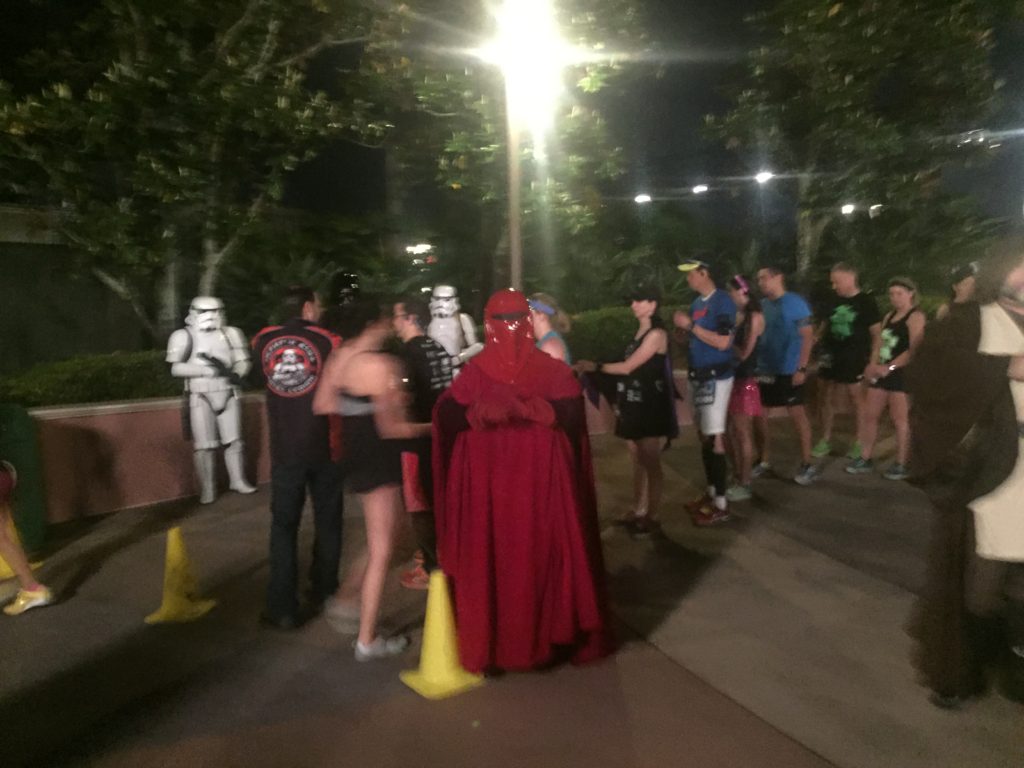 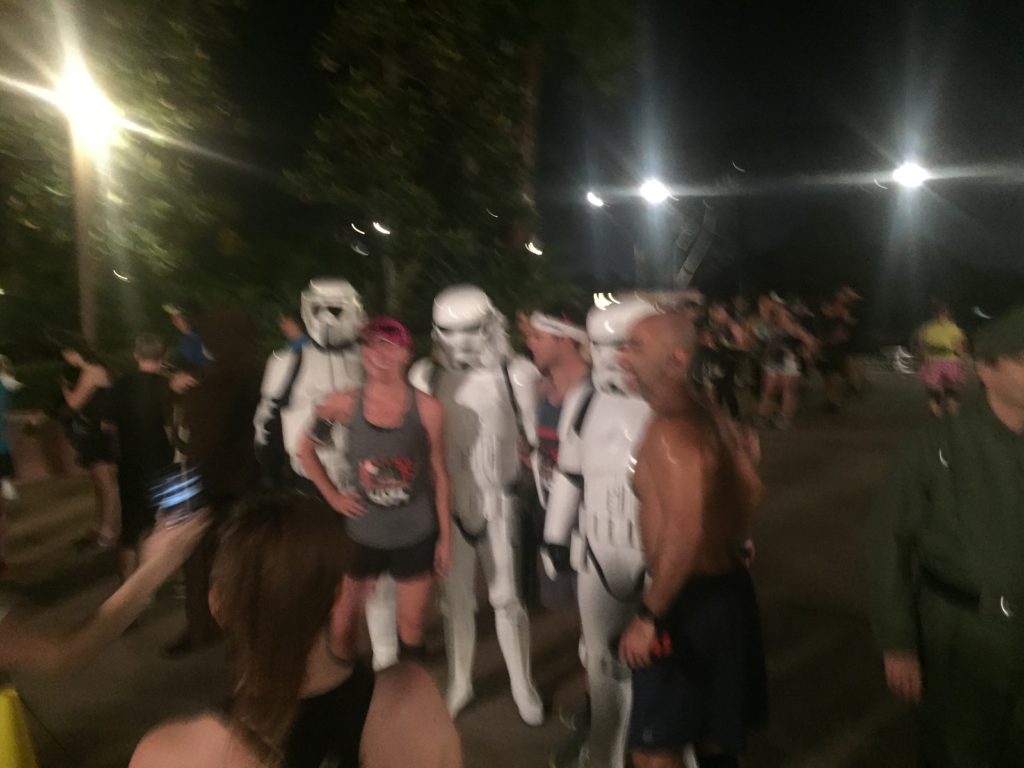 By now, I had realized that I wasn’t going to sabotage the team on time and I was really enjoying being with the group. I had conversations that would have never of happened off the course about things only said on the course. I’ve never laughed so much at a race before for sure!

The sun was starting to break as we entered the backside of Animal Kingdom. I will say I have a genuine dislike for that parking lot. It’s brutal during the marathon and today there was even more of the course covered in this lot. It’s not hilly or extremely bad, but it always seems never-ending. 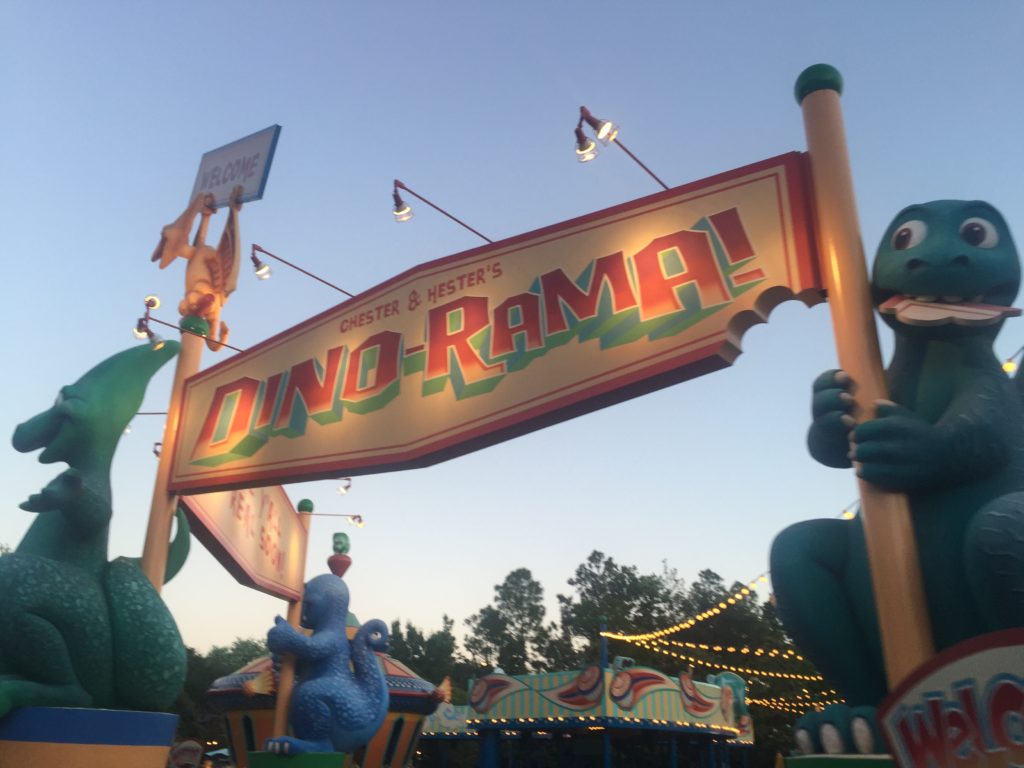 There were several good photo spots in the park this time. 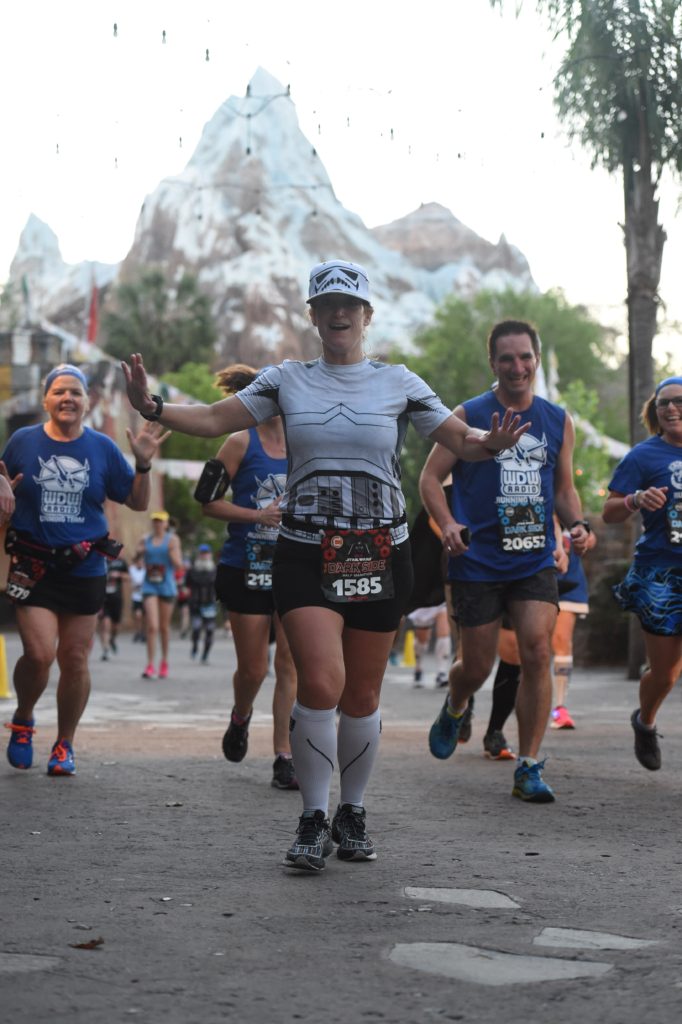 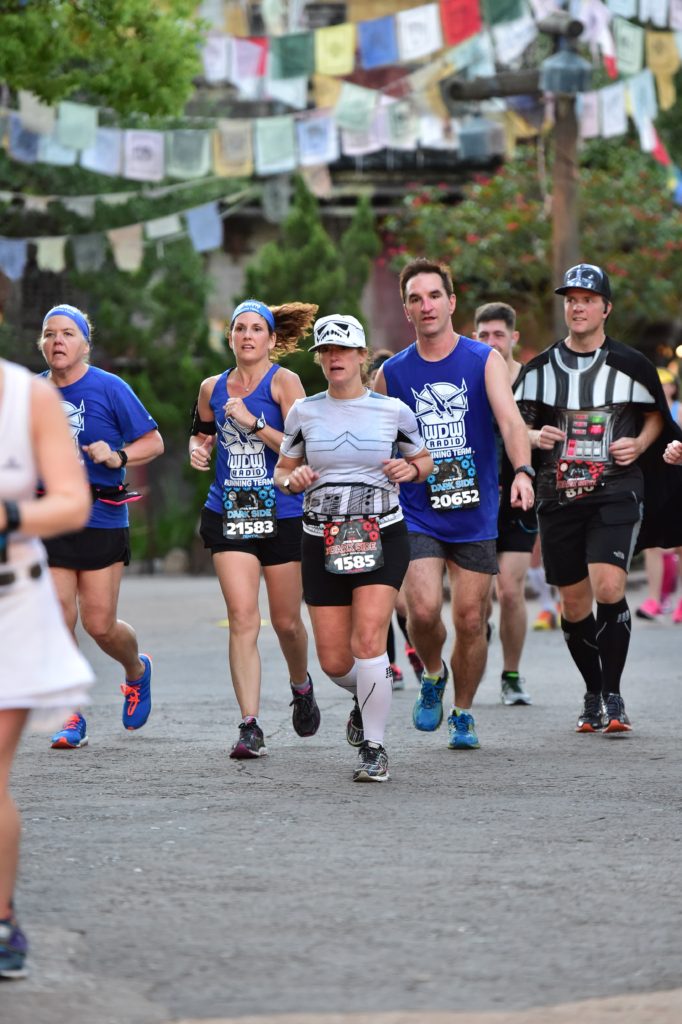 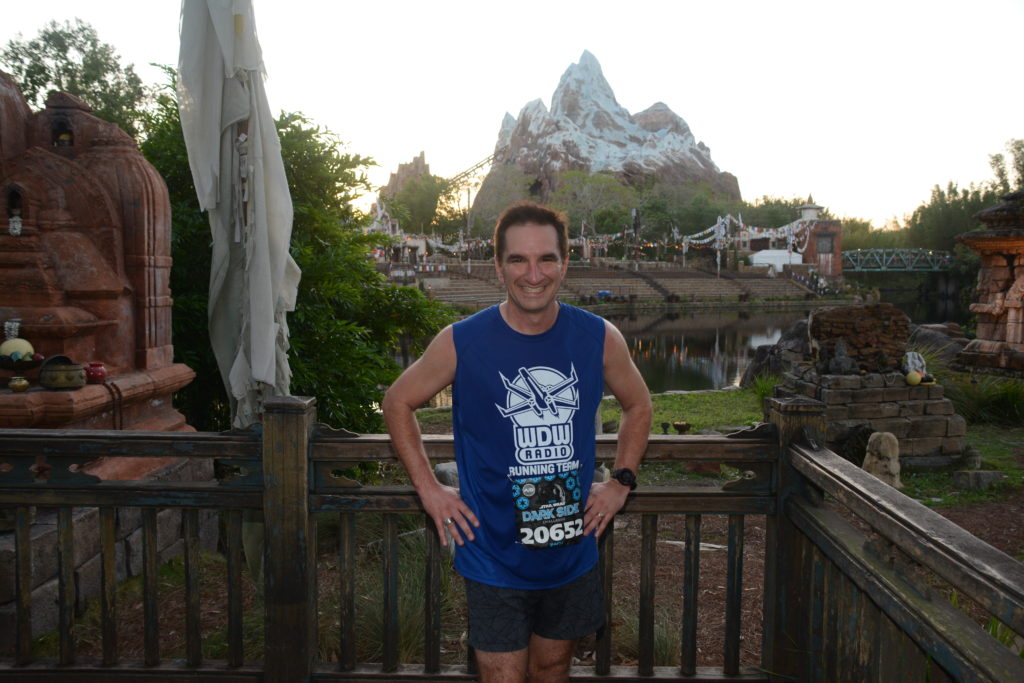 I did stop for one of the 501st groups. How could you not stop for an 8ft tall wookie? 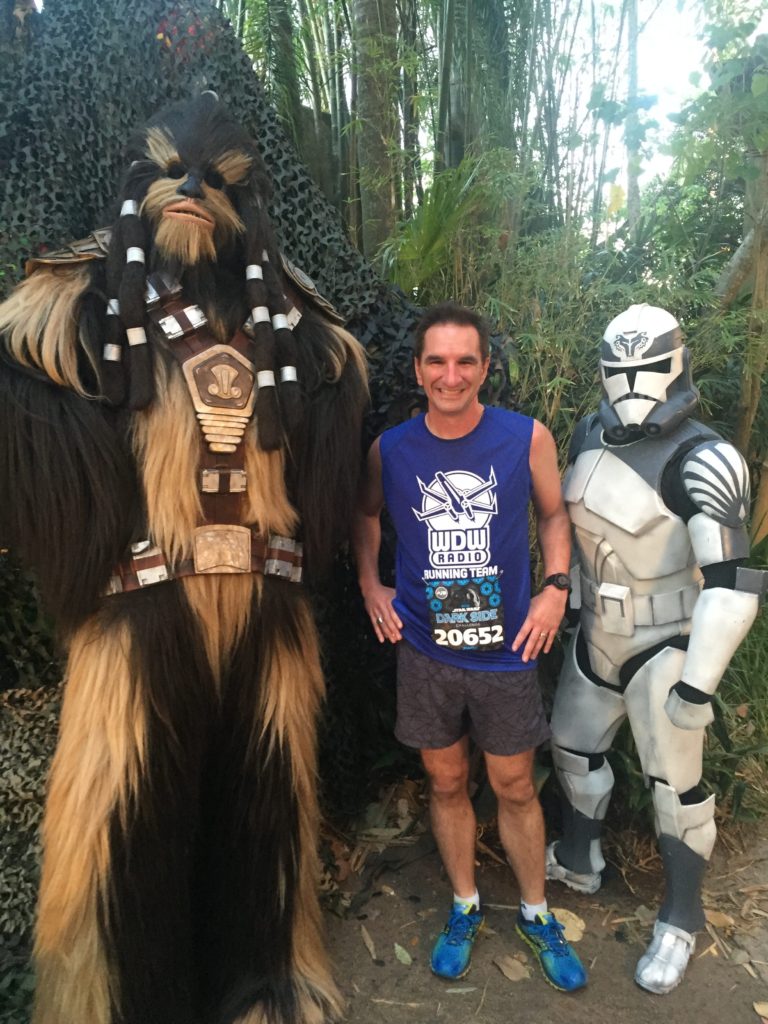 One the way back to ESPN, I saw James on the other side. We yelled at each other and then he bolted over to do one this trademark selfies. I think he took 40 pictures and they illustrated the train wreck that happened when we all plowed in to each trying to stop for the picture. This is the best one right before some of us go down. 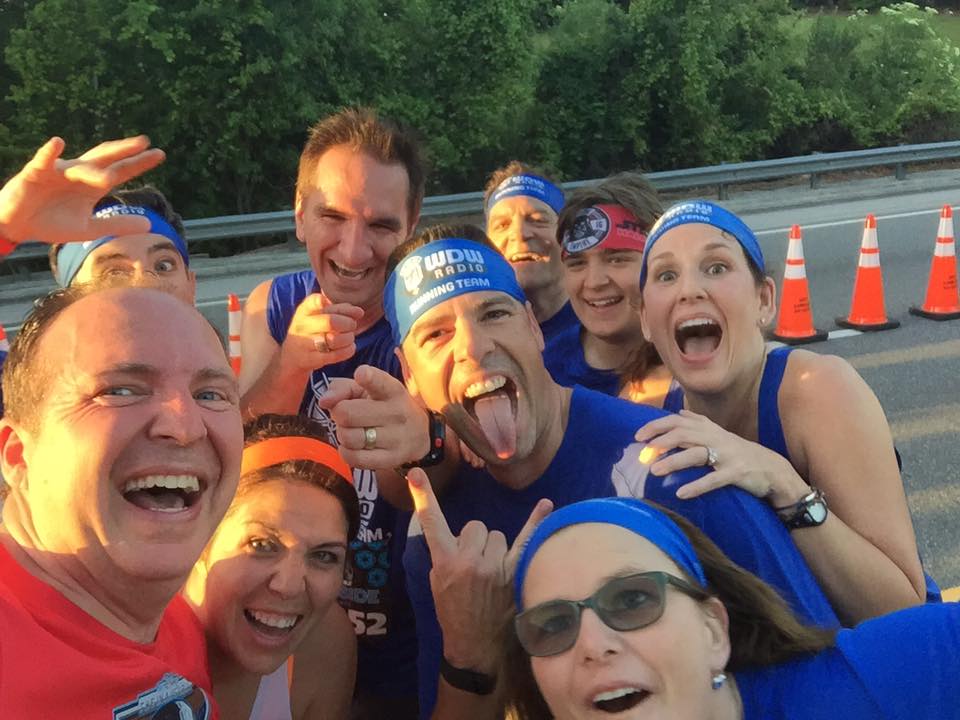 From here it was really just to push on to the finish. We did make one stop on the dirt road for a picture with the speeder bikes. 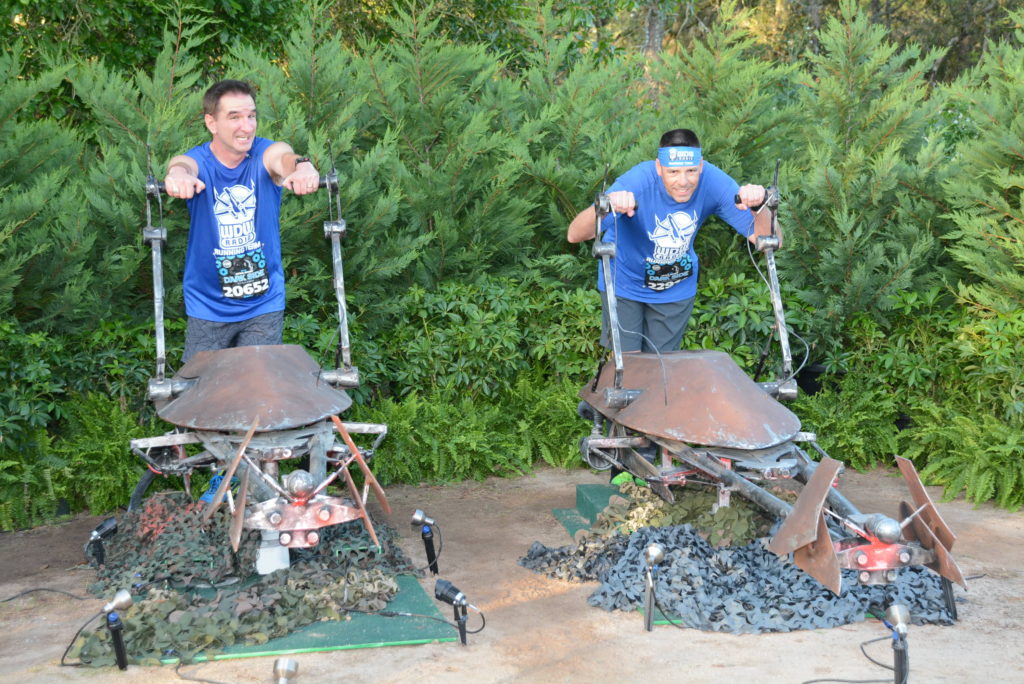 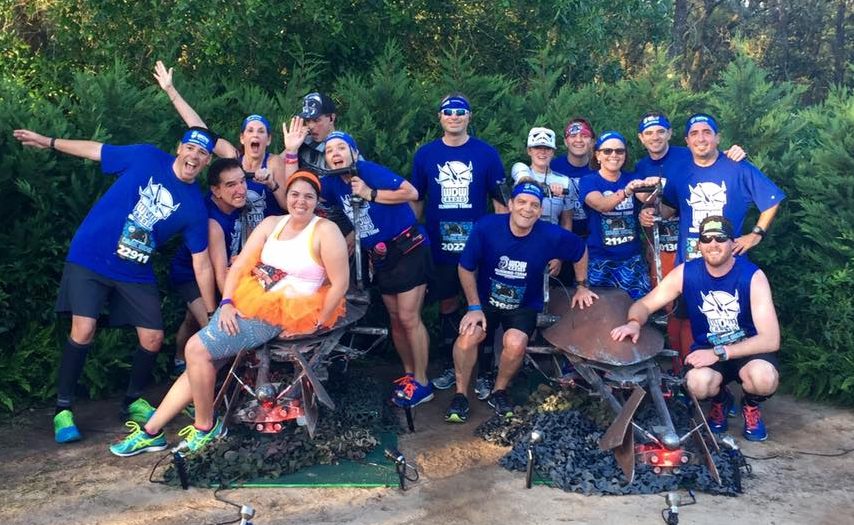 The crowds were back out along the course at the end cheering on our group. It was very encouraging and I think we all picked the pace up a bit towards the end. The crowds definitely help in the final push to the finish. 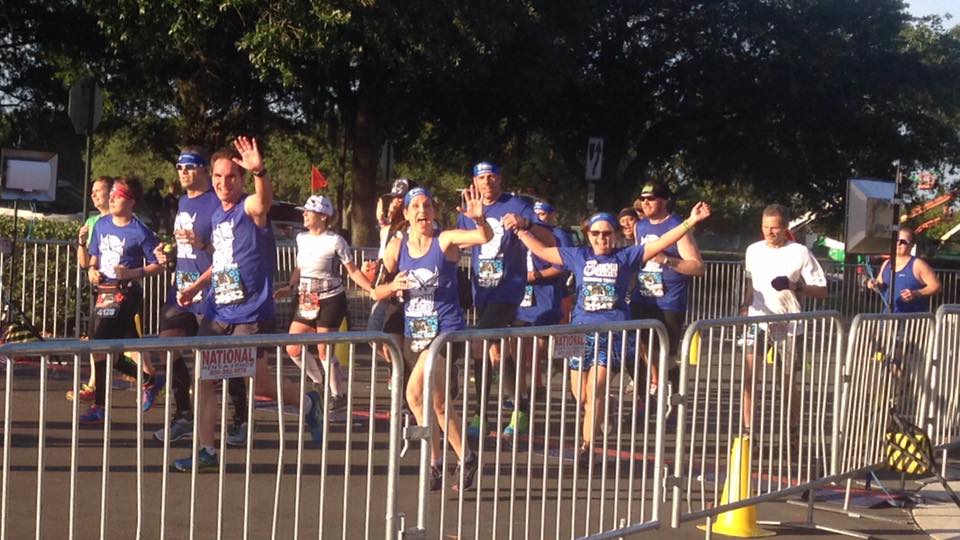 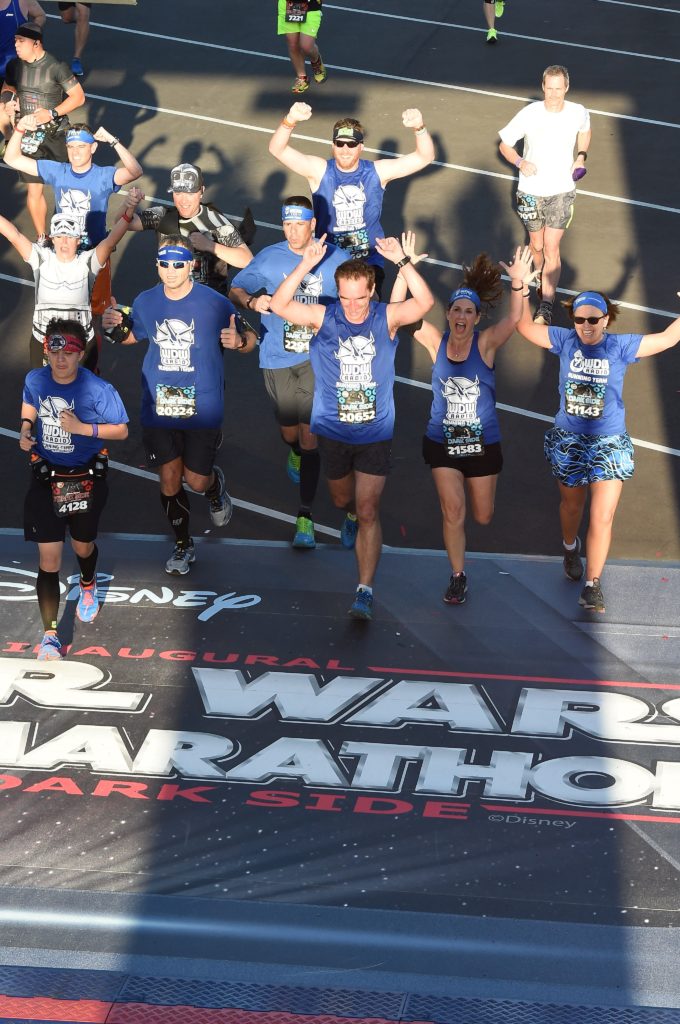 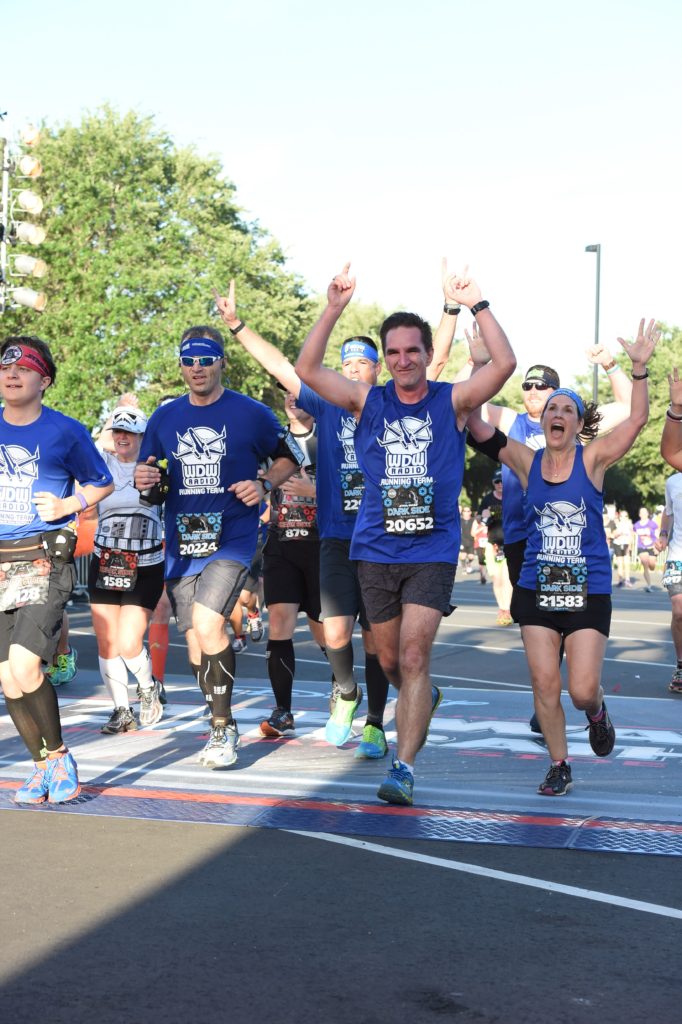 I was going to say that if you had an opportunity to run with a group to take advantage of it.  You can just join our group instead! You can get information about the team here: http://www.wdwradio.com/running/   I had a fantastic time enjoying the company and it totally changed the race for me.  It’s obvious that I enjoy hauling tail and picking up a bunch of characters, but I’ve got to say that I enjoyed this group just as much. I’m looking forward to running with them again in the future! 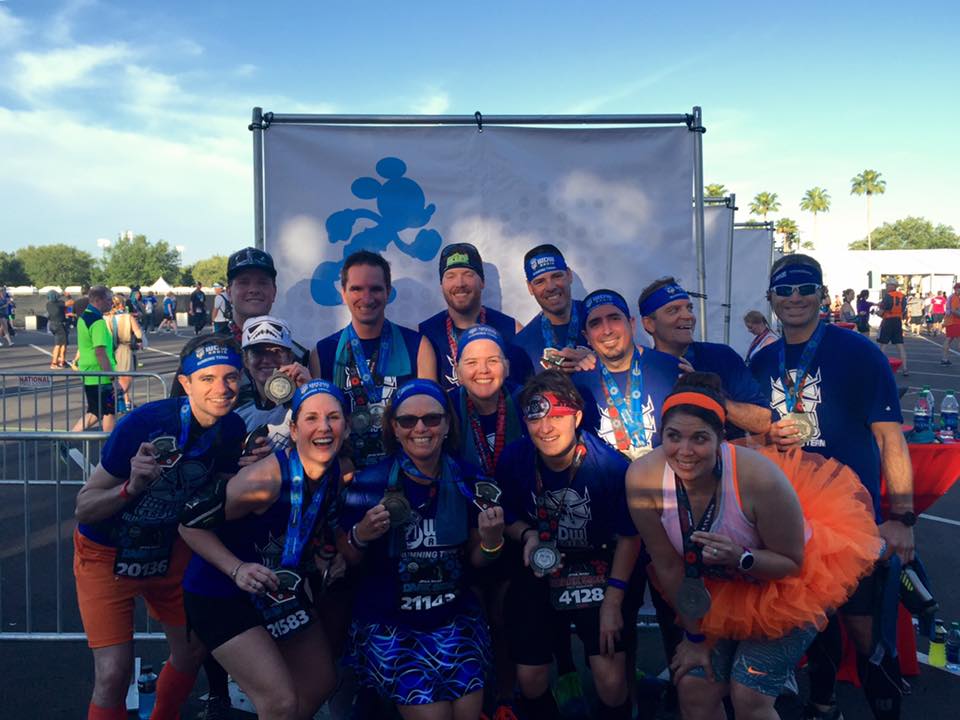 Next stop: Tinkerbell series in California!