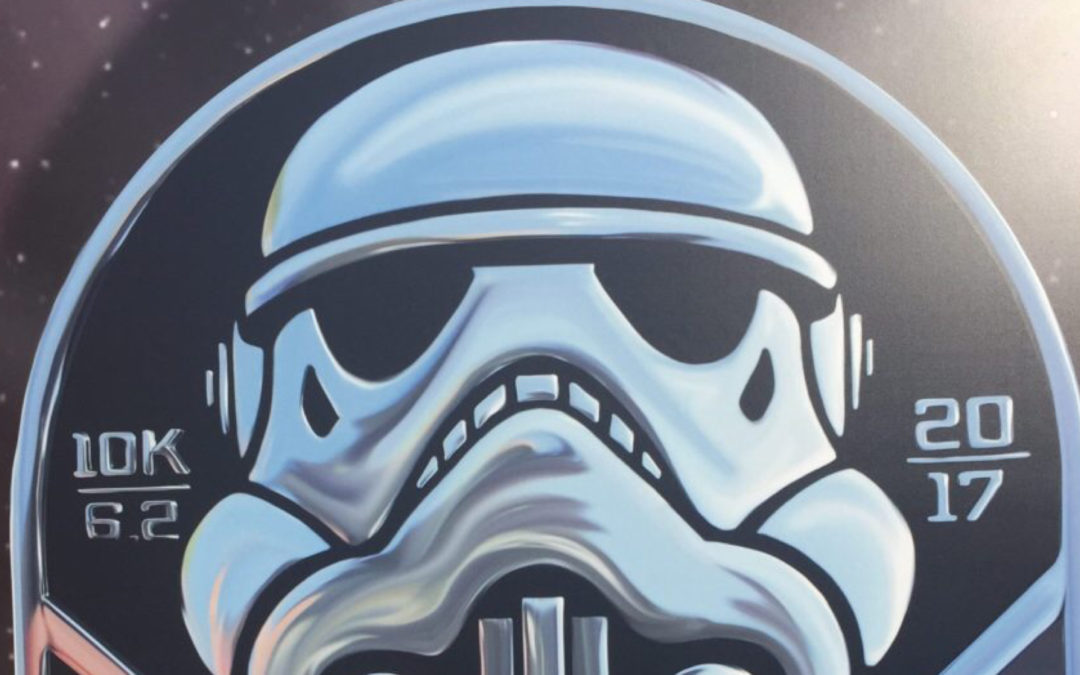 I was looking forward to this race for quite a while. I knew there was a very low likelihood that I needed any of the characters on the course, so that opened up a new option. Start dead last and see how many people you can pass.

The Dead Last Challenge is played in several running circuits. The idea is to see how many “roadkills” you can rack up during the race. The term roadkill came from ultra distance relay races, where runners would clock their “kills” against each other as a friendly team competition. The term made it’s way in to the main stream running community and even elite runners will get in on the act from time to time.

I was still teetering on doing it or not because I was recovering from running a 24HR race two weeks before with very little training and a messed up hip. Not exactly conditions you want to be dealing with when taking on a speed challenge! 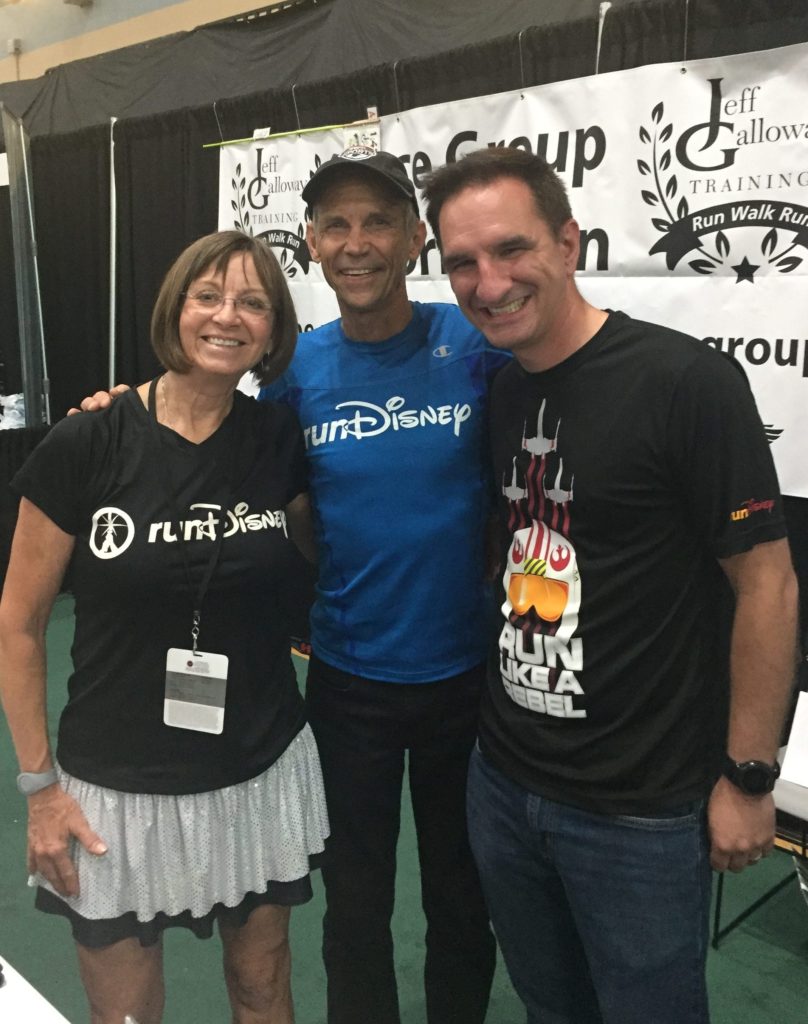 I decided the day of the expo and told Barb about it as a way to keep me accountable to actually doing it. She was very encouraging and told me that her and Jeff had actually done that a couple of times at their past races.  I was officially committed to it now!

I got there super early and was actually a little bit anxious about a race for the first time in a long time. Usually it’s the excited feeling after the wake up. After completing 34 other Disney races, I found something that I had lost at these races: the fear of the unknown. 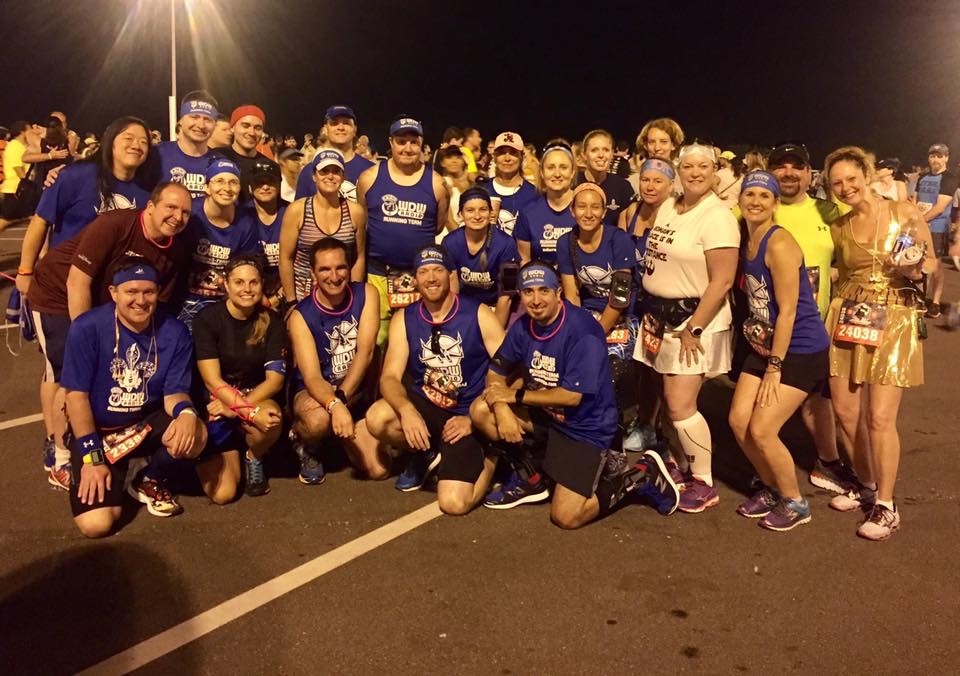 I link up with my team, we do some of the characters and then it’s off to the corrals. The volunteer checking bibs in F really didn’t want to let me in and thought I was wasting my bib. I assured her that I knew I was in the “incorrect” coral, and that it was going to be a fun race this morning.

The empty space is my corral. All those people are the edge of E coral.

It was spacious and quiet which was real nice. I was still trying to get mentally prepared for the run and I was seriously concerned for my hip. I knew it would make it through this race, but I also had the half marathon to run the next day. 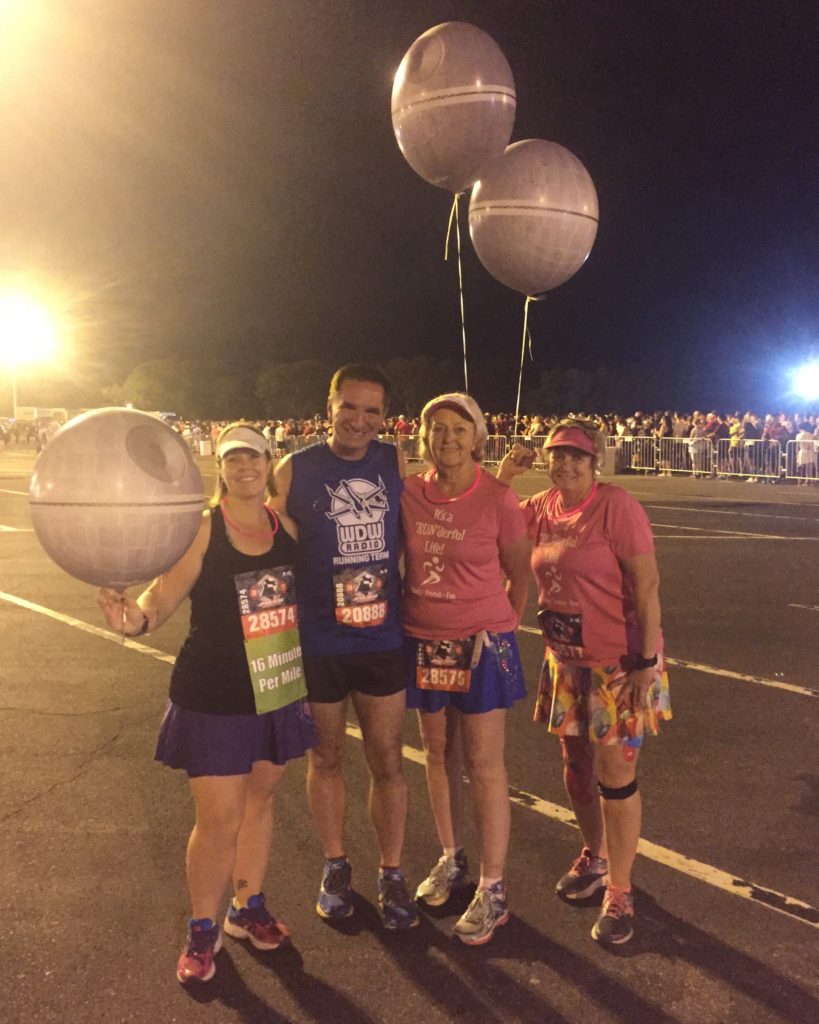 Soon the ballon ladies showed up. We immediately hit it off. They were so much fun! I became the impromptu photopass guy and hype man for people wanting to get a picture with them. It was fun to encourage the ones that were worried and others that were excited for their first Disney race.

I also learned some things about the ladies. I didn’t know if it was a volunteer thing, runDisney picked, or cast members that get to be the balloon people. It turns out these ladies have been doing it consistently for many years on the east coast and are involved in training with the organization that helps put on the event for runDisney.  Mystery solved! 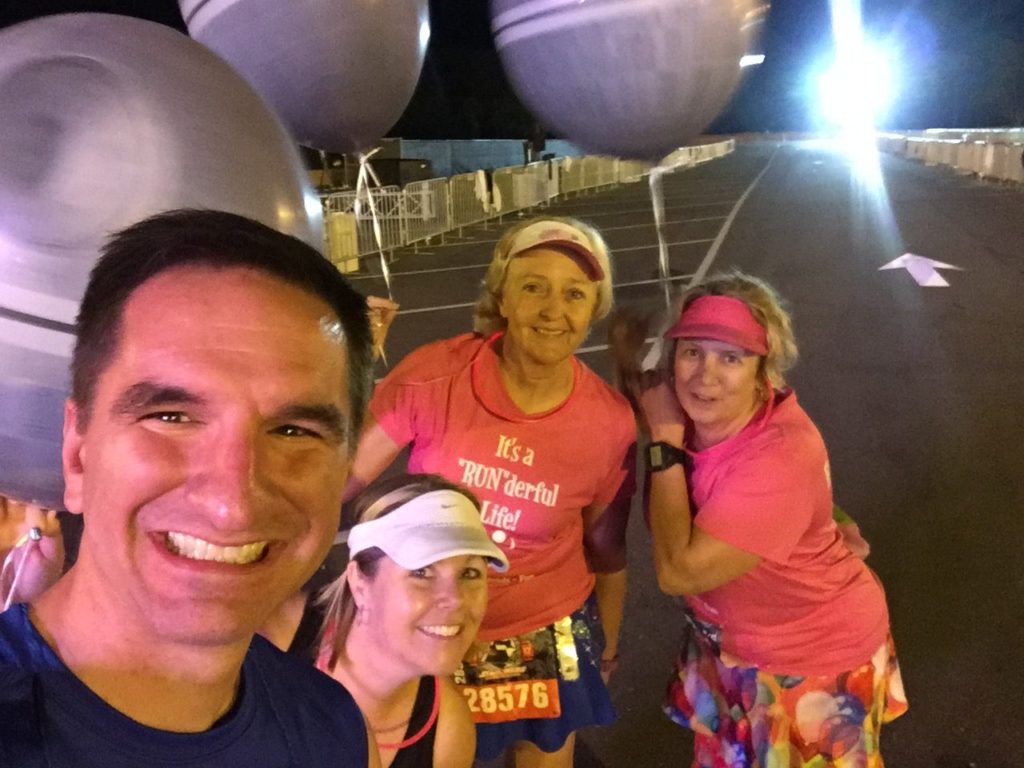 I was also surprised by how many people showed up at the last minute. Dozens of people were literally running down the corral to make it out as the back of the last group was getting going. Now that would be stressful! 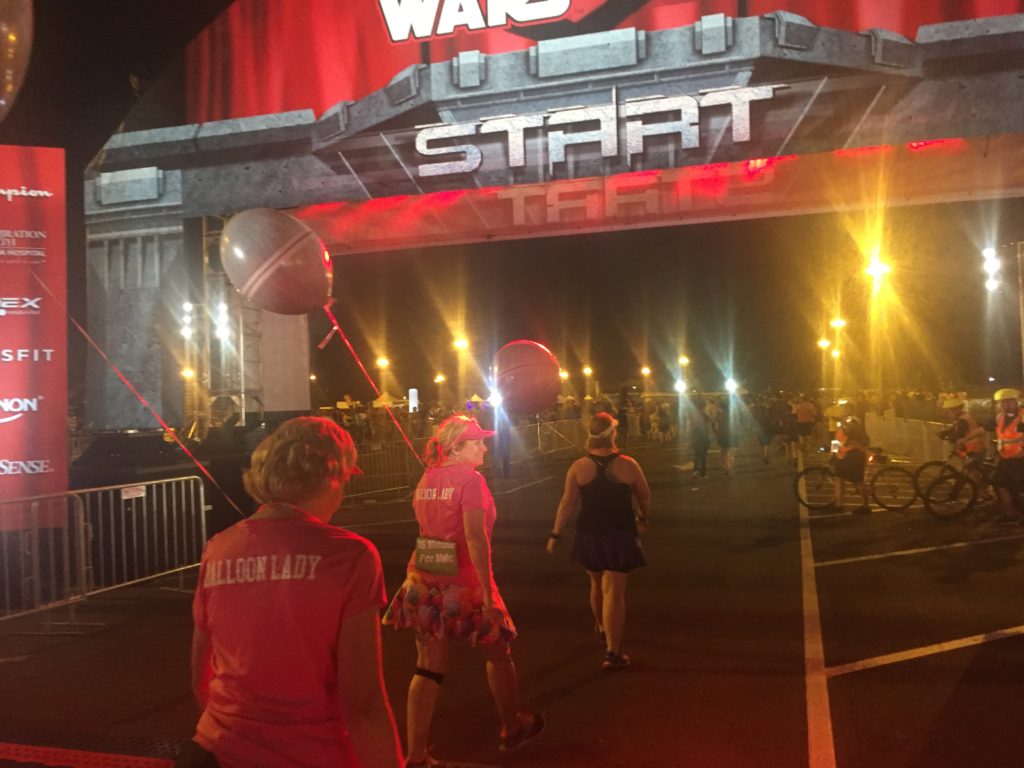 Before we parted, the ladies asked what my goal was for the day.

“You’ll get that easy.” One said. I wasn’t as confident.

I let the ladies go out and I got shout outs from the podium…..that no one heard.

Time to do this.

I plug in the music and start getting after it. I had no real plan as far as pacing, I thought I would go faster at the beginning to buy me some time when the course tightens later on.

The first half was almost all in the grass on the side of the road. There were a couple of points where I was forced up on the road by a guardrail or other obstacle but it was pretty much like a trail 5k for the most part.  You would think that there would be a high amount of running into people, but it was actually pretty calm. I only ran into two people. One where a guy dead stopped in a water stop and another where someone went to a sudden walk break without signaling. Both were likely new, so I don’t blame them for the run-in. 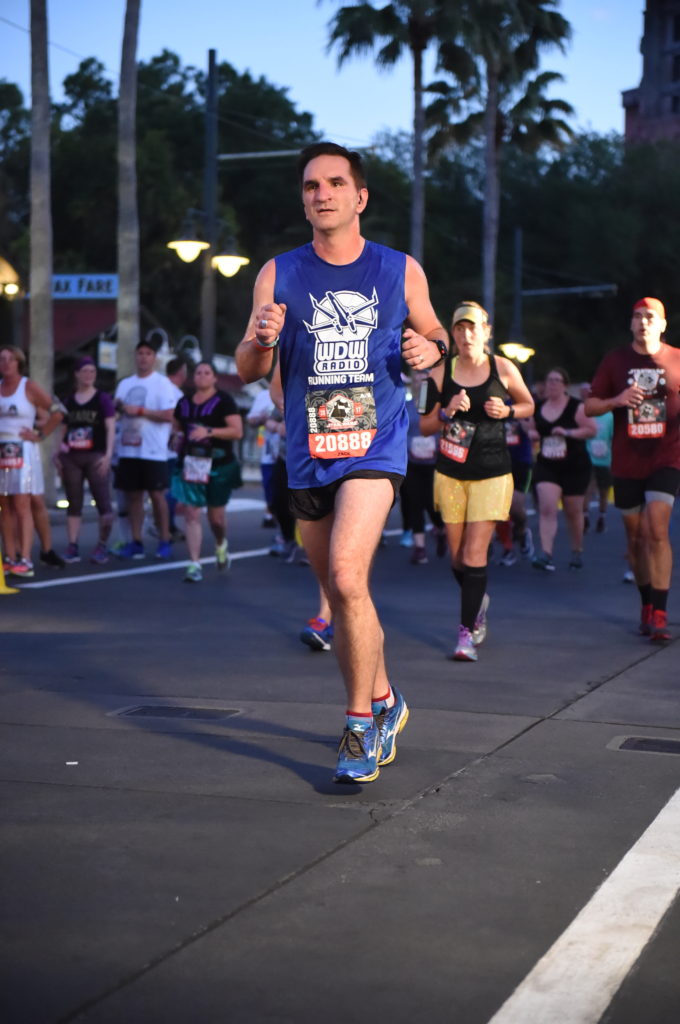 I was pretty determined, but I still hit some good pockets for some pictures. Want to make sure you get some great shots at your Disney race? Check out this Proven Strategy on how to get some. I love how pocketing is becoming a thing at these races now. 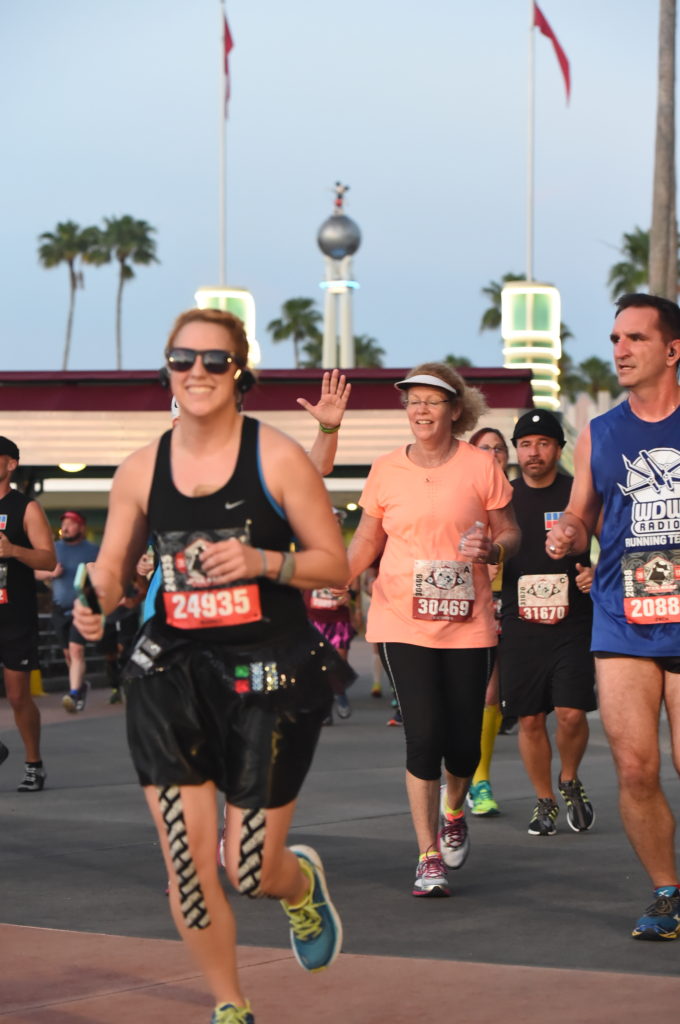 This is the look on your face when you realize you now have to dodge planters, benches and trees in addition to people……

It got tough after Hollywood Studios. You travel through a very small paved trail from the park to the Boardwalk area. It squeezes and rails replace the margin on the side of the course. I know I hit my slowest time through this area. I could tell I was running into people that were tiring out, so I turned up the encouraging factor to those around me.

Once on the other side, and on to the boardwalk, I see a bunch of people with different bibs running right at me! Turns out one of the hotels put on a 5K and did’t communicate it with runDisney. Communication issues happen to the best of us.

I was glad to be on the boardwalk. It was a little cooler and I knew my cheer team was up ahead. I was wearing down quickly at this point. I connect with the group and see some of my team members up ahead….and a photographer. If I hustle I can pull a photobomb….. 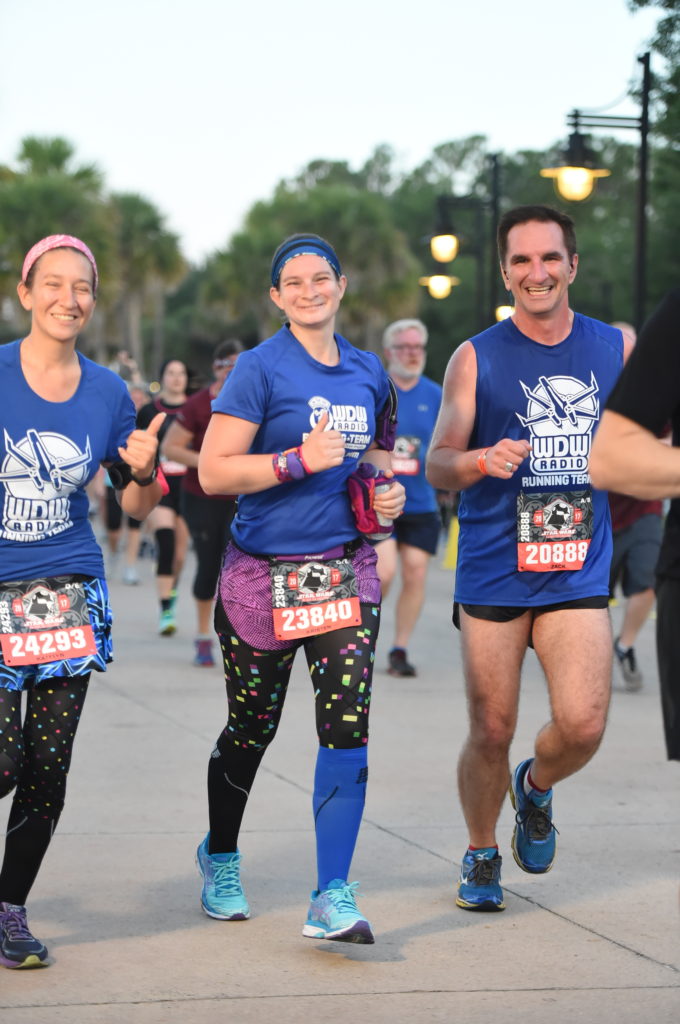 Nailed it. They didn’t realize I was right beside them although they look great and I’m covered in skin tears.

We are finally in Epcot proper and it’s time to turn out what energy I have left. The course is nice and wide here so it was real easy to maneuver around.  I was able to find a couple of other small pockets and grab some more shots. 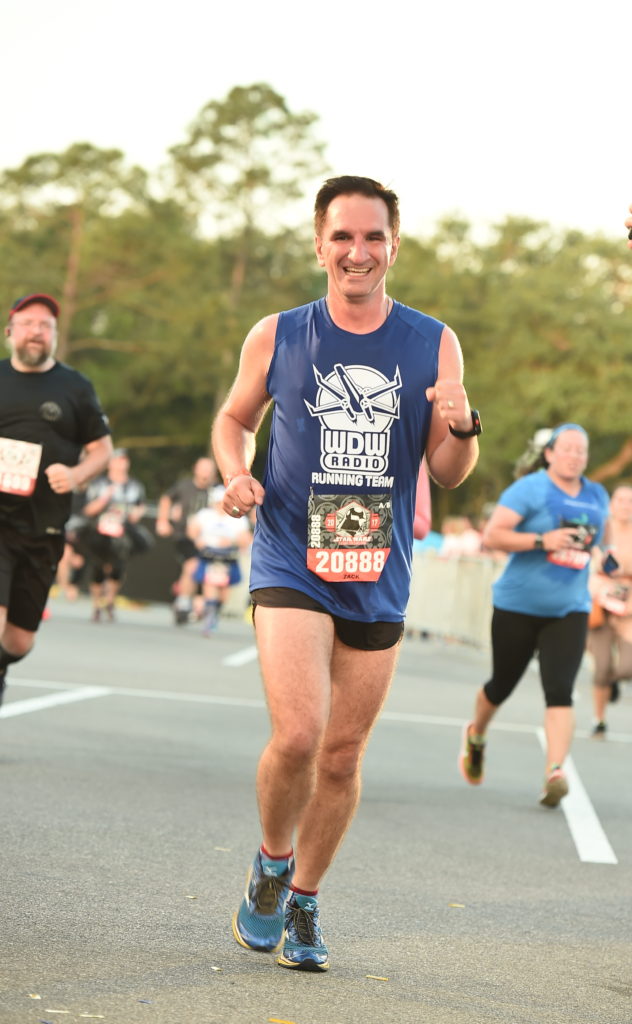 On the Outside: This is a great race! On the Inside: Release all the sweat. Hip: I hate you. I want a new owner.

I slowed down at the end to get the announcers attention that I had made it. They were super excited and supportive! 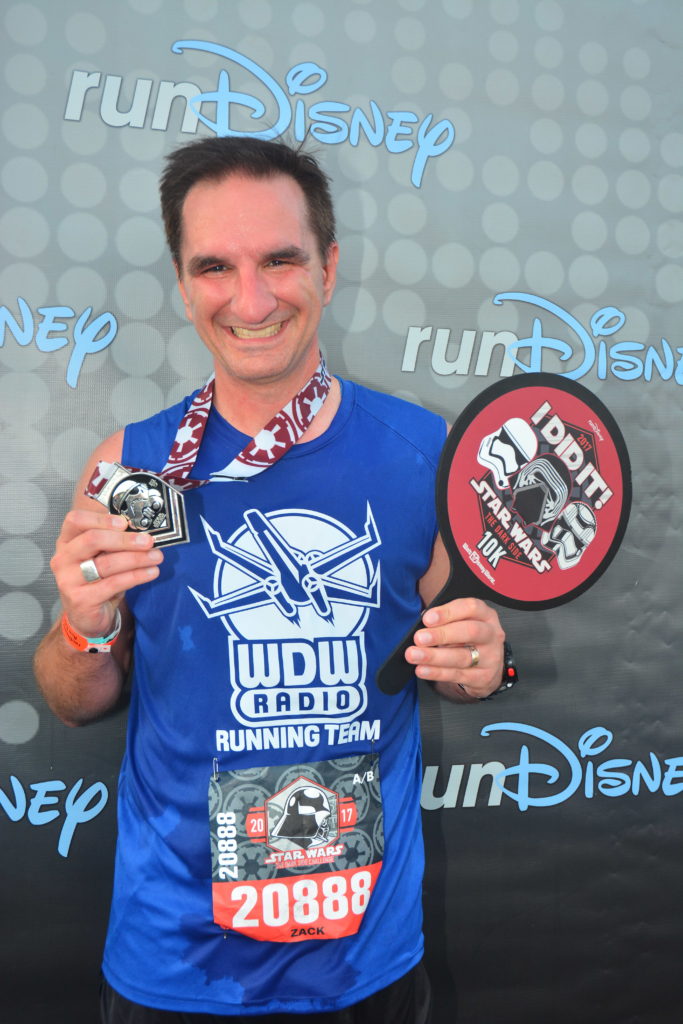 Well I ended up doing much better than I expected:

I added almost half a mile in distance from all the weaving.

It turned out to be a really fun run and challenged me in a new way. I was thankful to have met so many great people before and after the event who wanted to connect about the challenge. In the end we were all out there doing the same thing; experiencing a race together and enjoying those around us.

For those interested in doing this at a Disney race, you can join the runDisneyrun group on facebook where David keeps track of your score. Search for the dead last start game. He does a great job!

If you are slower be encouraged. You are not missing out on anything from C coral and back. The only advantage in A & B is that there is more space and the character lines are shorter. Keep doing what you are doing. It’s more than most Americans are doing and we all hold the same medal in the end.

NEXT UP: The Darkside Half Recap (back with friends) 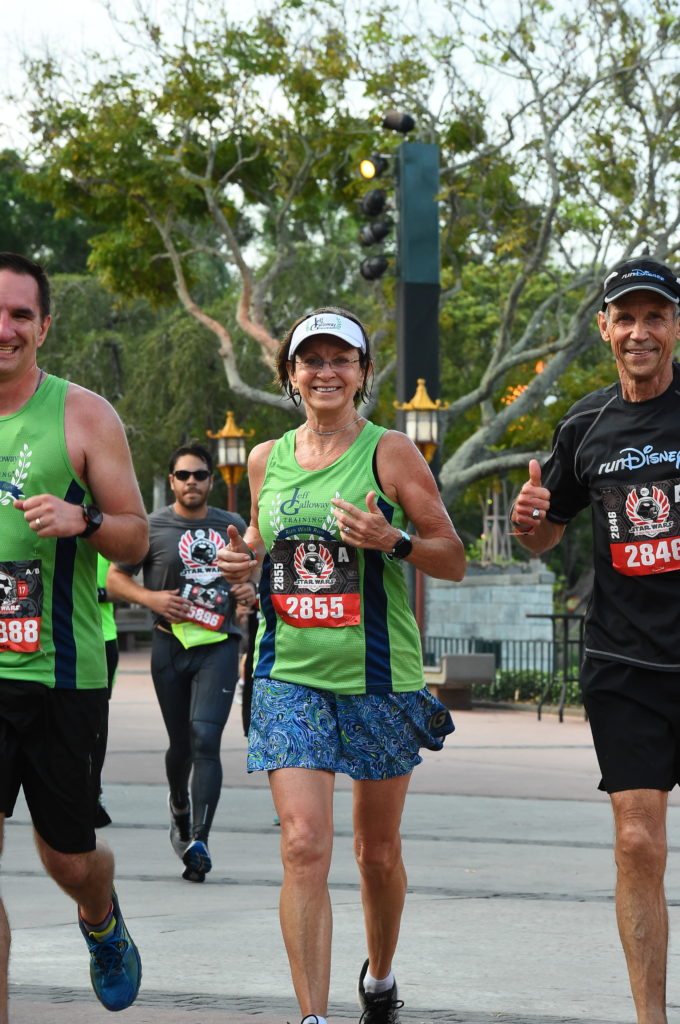