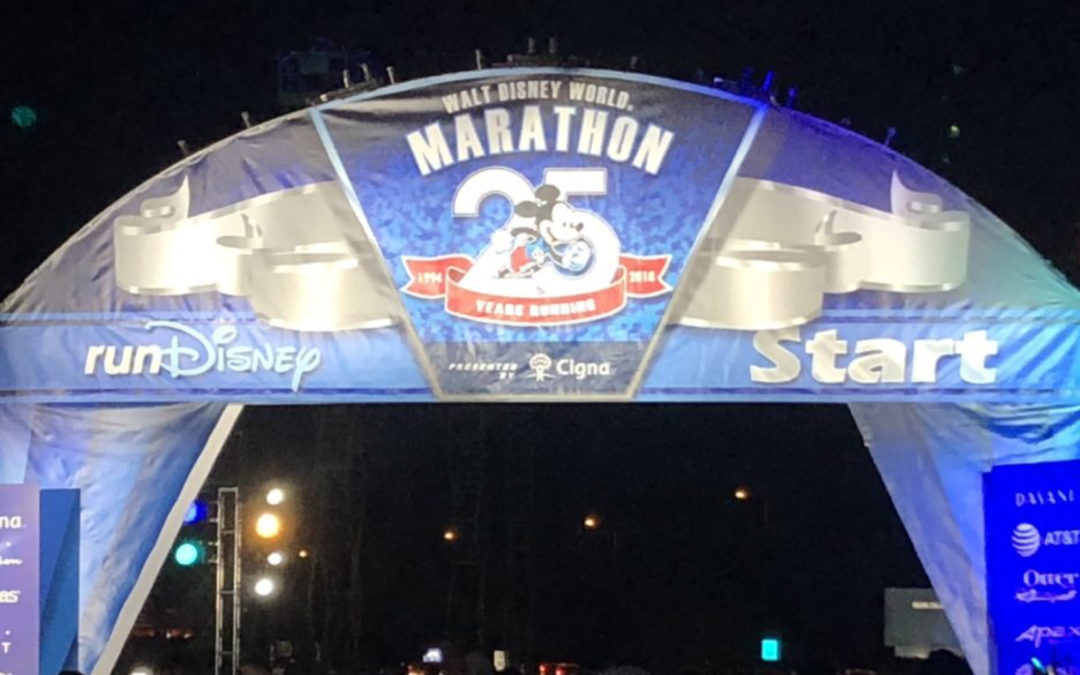 It’s day three of the Dopey Challenge. It’s still freezing cold out. The January race series has turned into a wildcard weather wise. The last three years have been consistent in their inconsistency. 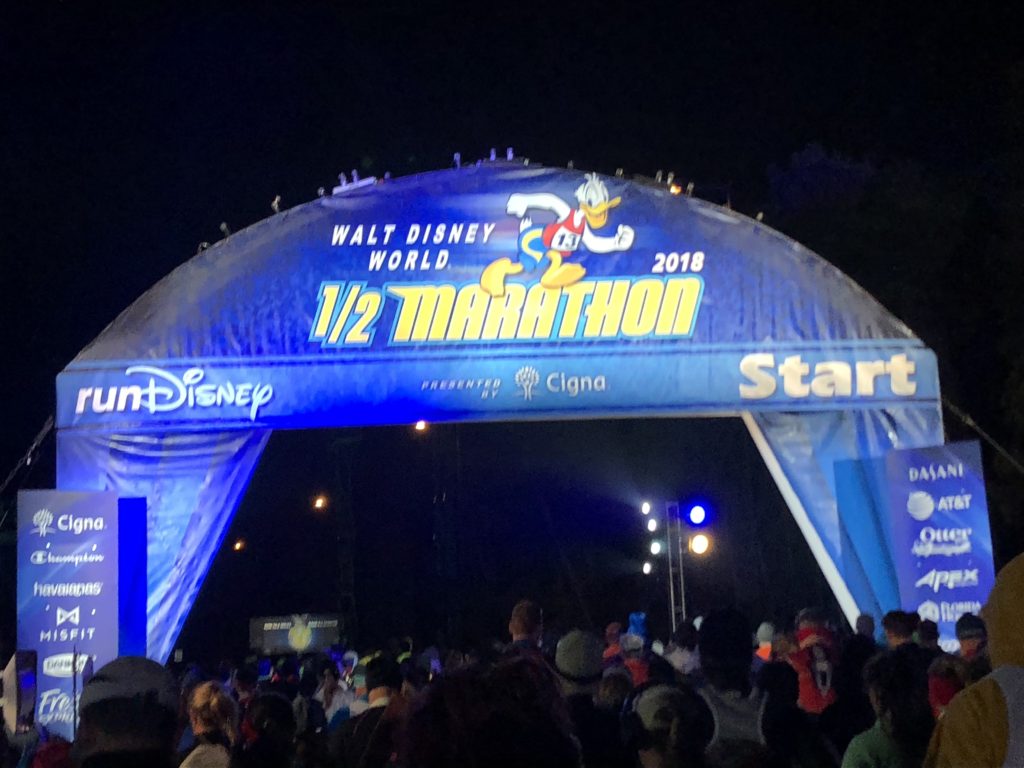 I like this half marathon OK. I think I would like it more if I were just doing this race. There is typically one super rare character stop on the half route, so I was hoping to have better luck than the 10k the day before.  This was also the first day that our little running group was fully together and without costumes. 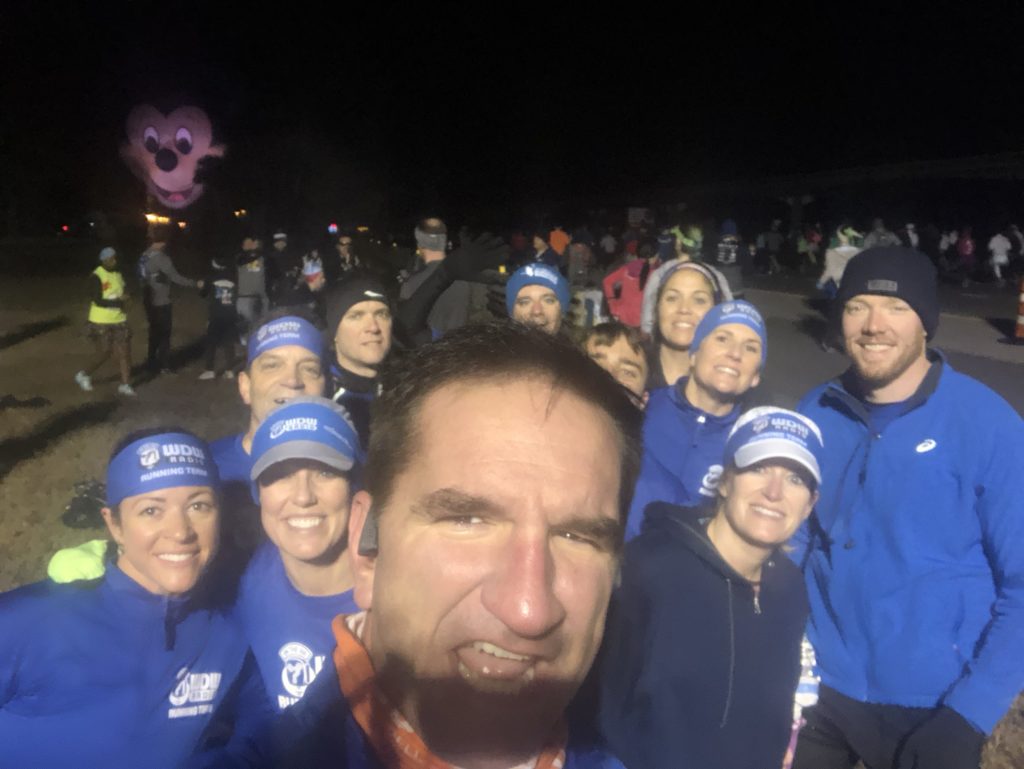 The trip into the Magic Kingdom was your typical marathon weekend route. You get a couple of few characters stops in the parking lot area before you head towards the results. These are usually mid-level rare characters, If you’ve never run one of these races, you’ll want to plan to stop around the 5k mark.

There was a slight change to the route as it entered in the park. Instead of veering to the backstage area and then unto Main Street, you now come in through the bus drop off area. It made for a nice buildup as you crossed under the train station.  It was great to see the cheer group and we got the crowd hyped up as we proceeded towards the castle.

Once you make it into Tomorrowland, you’ll typically find some characters from that area. As you turn into Fantasyland, you’ll get a second shot at mid-level rare characters. Typically an Alice theme, Ariel theme and Beauty and the Beast theme. They are always a good stop and only the Ariel theme gets crazy backed up.  We turned the corner to go through the castle and I finally get my rare find! The mice from Cinderella! They are really hard to get a hold of but you can actually meet them in MK if you are lucky. If the Fairy Godmother doesn’t make it in the park that day for meet and greets, the mice will sometimes fill in. It’s always unannounced and the Fairy Godmother is the healthiest person in the park, so she rarely misses a chance to greet guests. 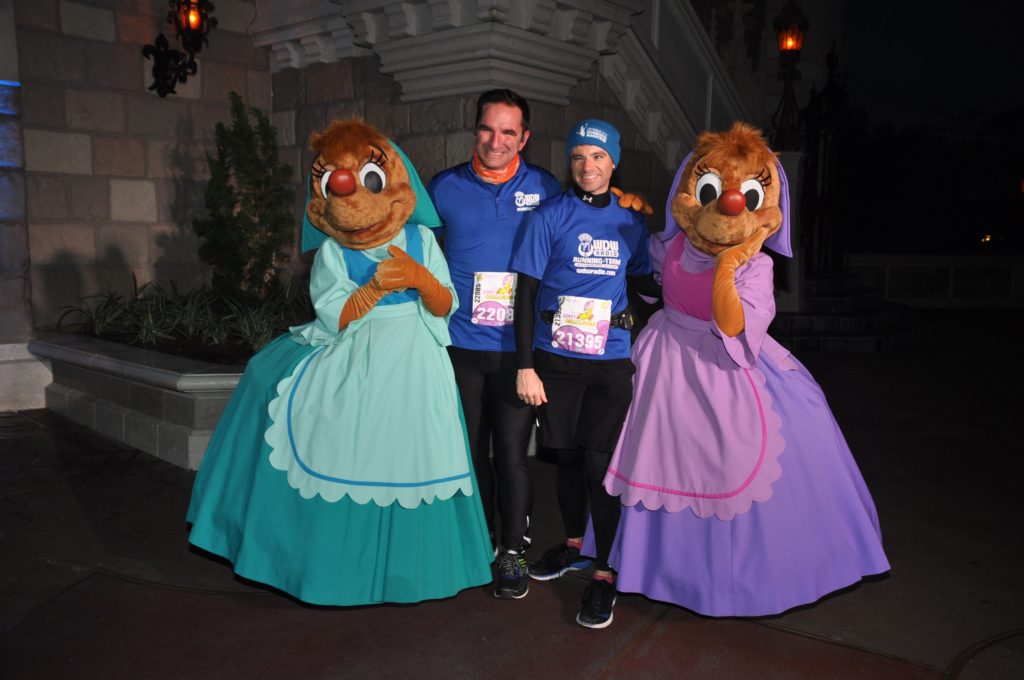 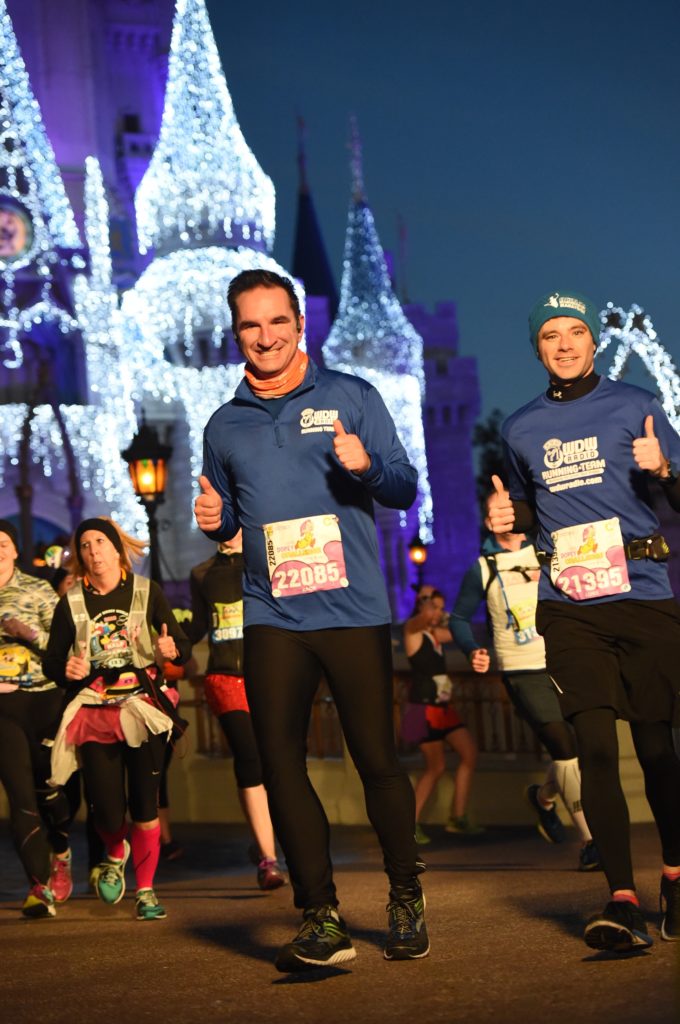 I love this picture of Danielle and I. Her and Chris are easily our favorite thing that we love about Atlanta. This picture does show a new tip that I need to add into the Tips for great pics at Disney.   The lightning? Perfect. The background? Perfect. Both are uncontrollable though. The lesson is the importance or edge you get with a running buddy. As great as this picture is, Danielle wouldn’t have gotten it because her running belt covered up her number slightly. I can’t tell you how many times a picture has been saved because just one person had a bib that showed. 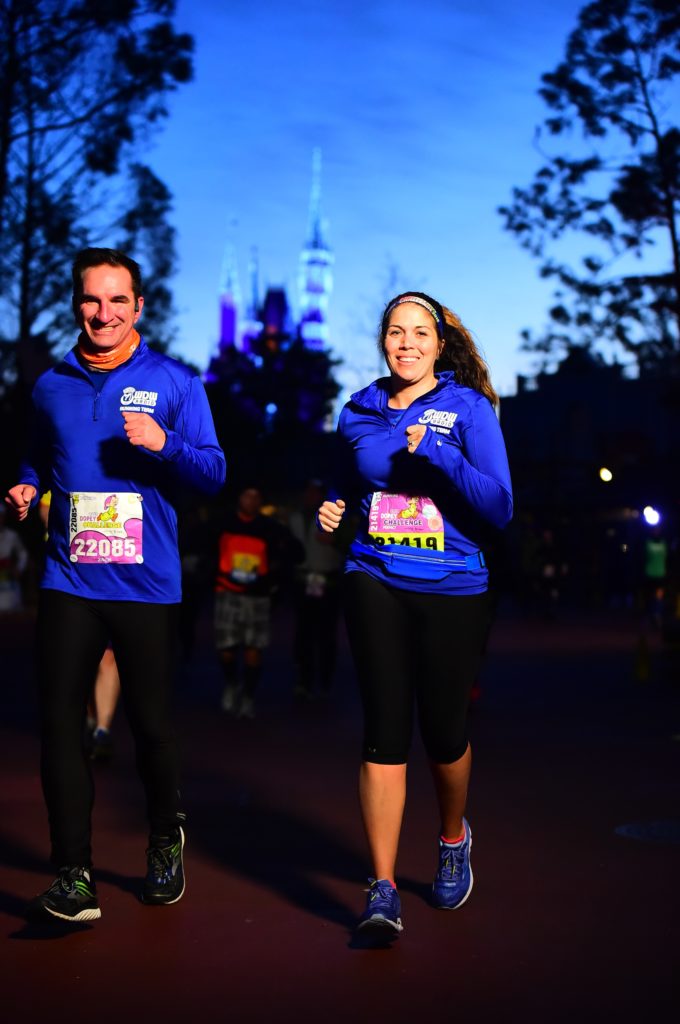 The sun always beats us to the finish on half marathon days. It makes for a good mix of pics but it also makes us look like we’ve been running forever. I took the opportunity to pocket for a few solo shots. Even when running in a good size group, you can get pics like you are solo. 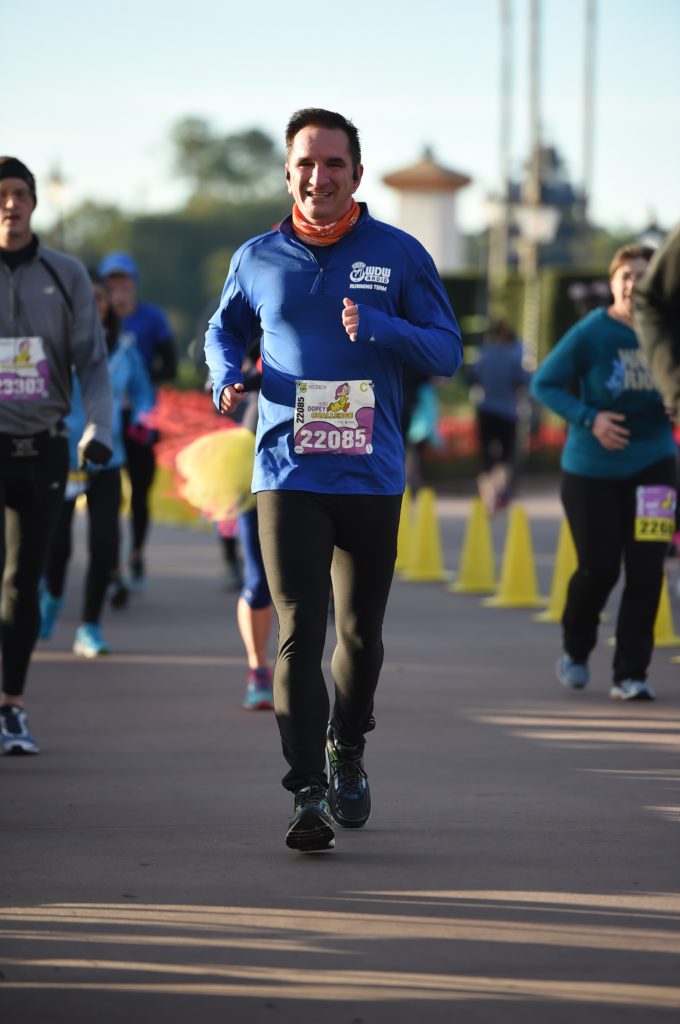 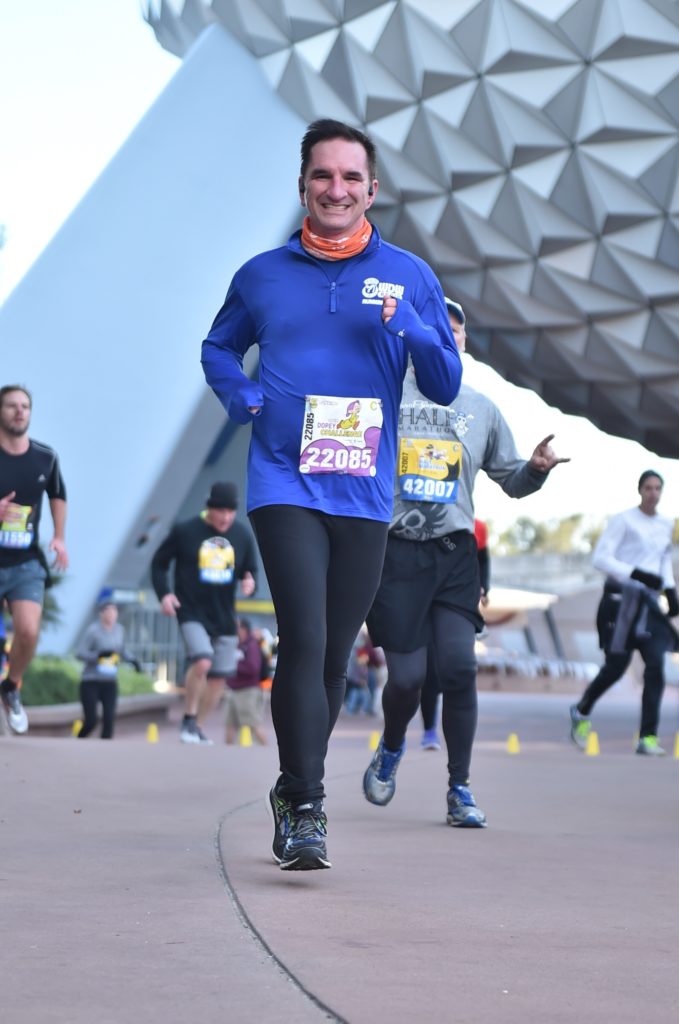 The pace of everyone usually picks up on the backside of the ball. You’ve got the choir singing and you know that you are just a couple of turns away from the finish. 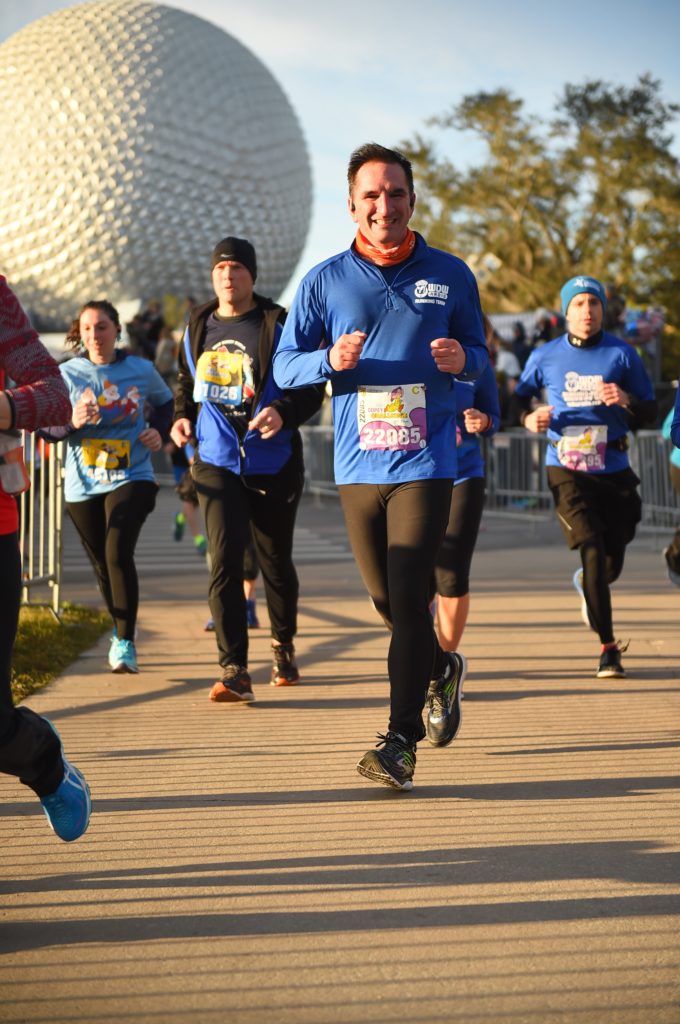 See there were a bunch of us! 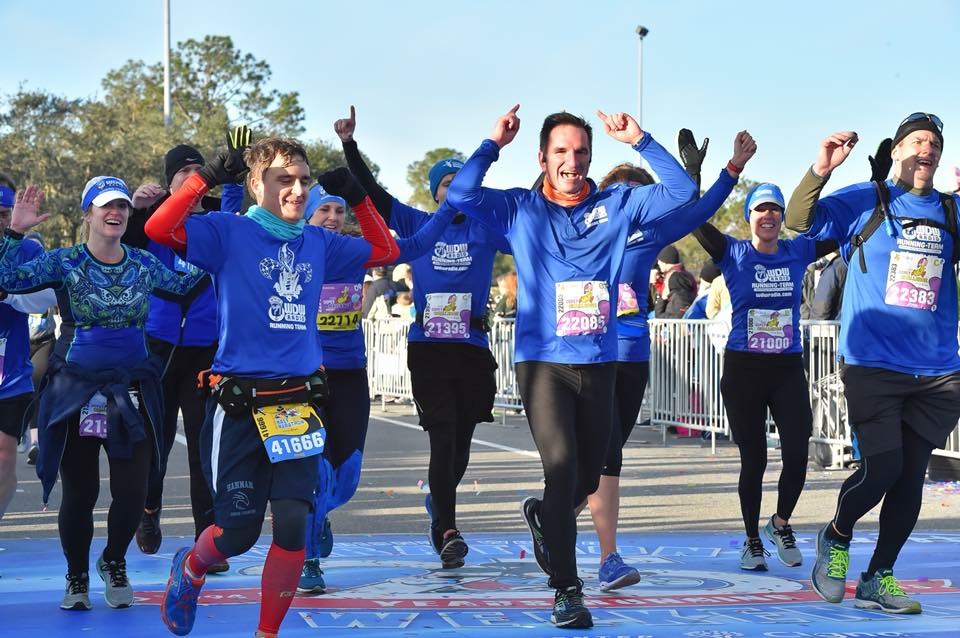 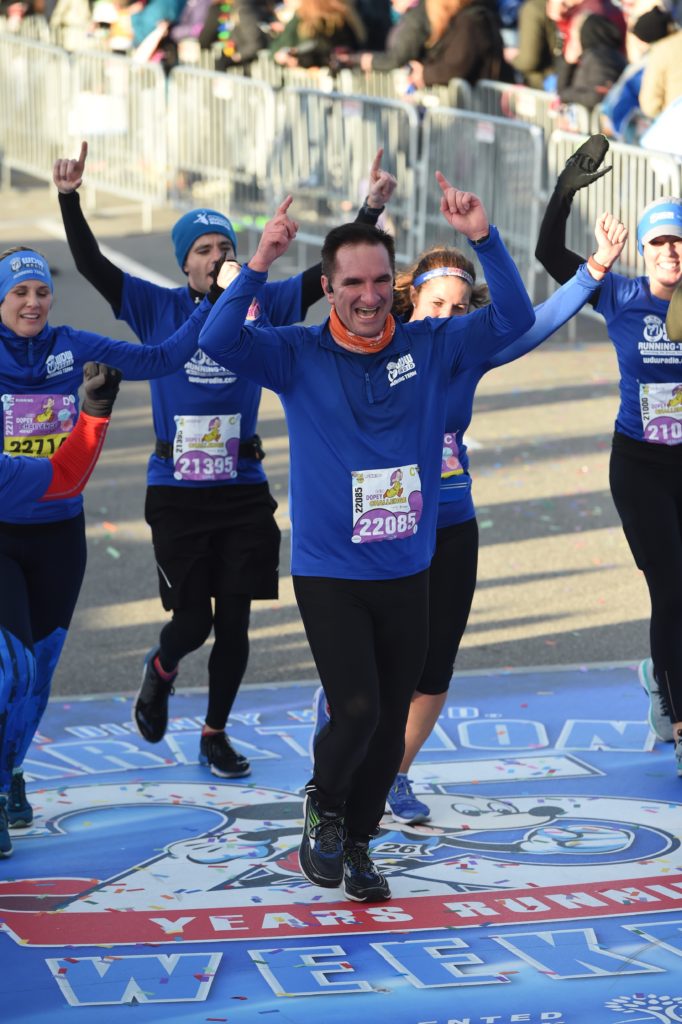 Now that that’s done, we just have to double it the next day…. 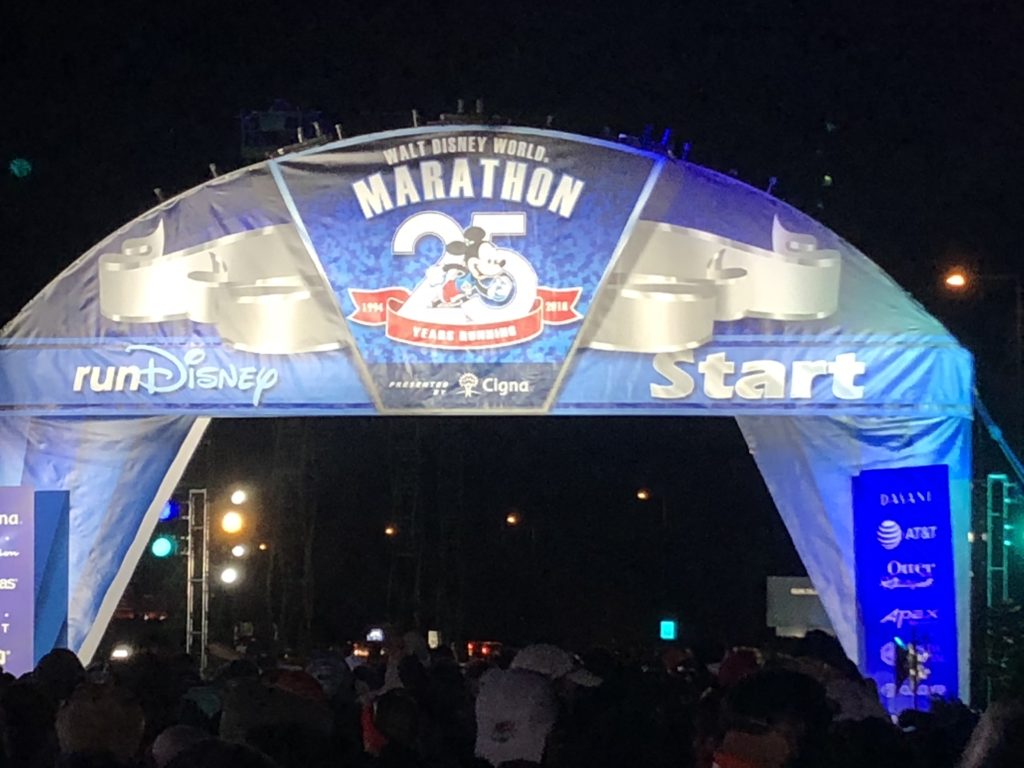 I was a little nervous about this day. My body crashing after the last time I did Dopey was ringing in the back of my head. Sharon and I had a plan to combat that though; I would build us an aid station and she would bring it to Animal Kingdom so that we could resupply halfway through. Now there was no need to worry about the 20-degree change in temp from beginning to end or worry about carrying too much stuff on us. 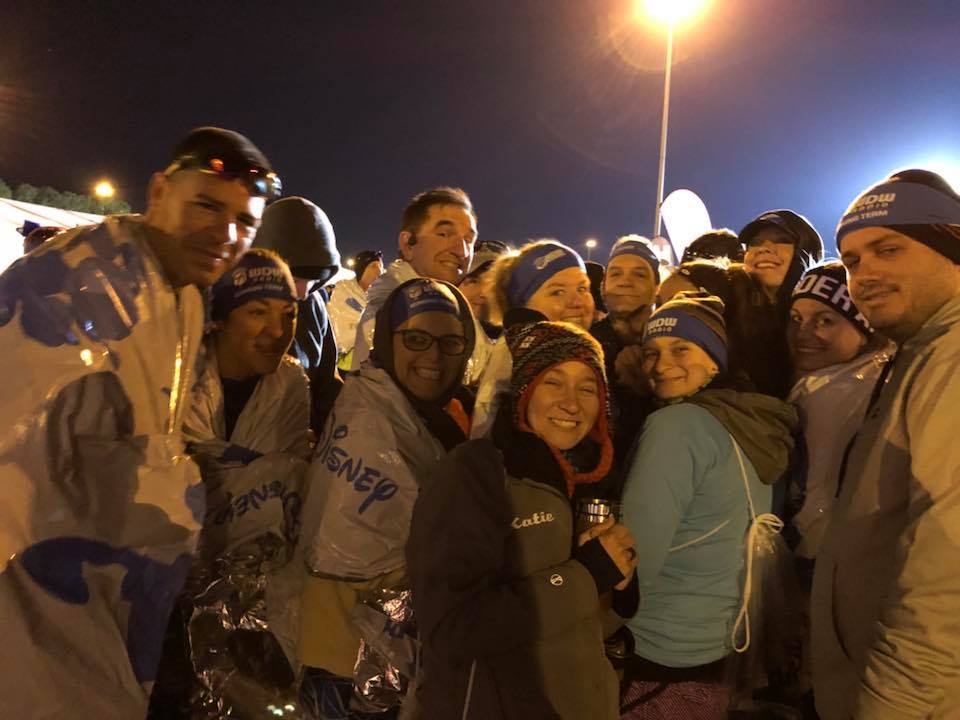 It was so cold that we got in the tightest ball that we could and used body heat to warm each other. It was ridiculus! 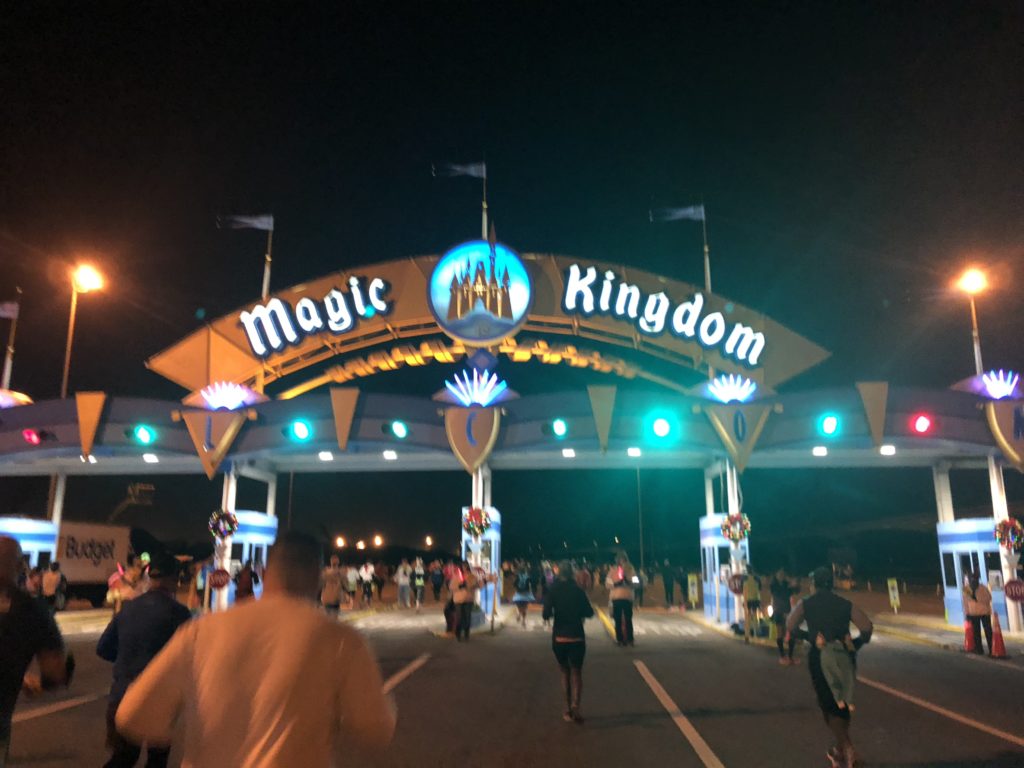 So everything is going fine once the race started. A couple of us start out with a friend of ours that is injured and let our group sweep us. Still, things are going just great. The same character stops are out in the MK parking lot and we eventually make the turn towards the Magic Kingdom. It’s cold, so I’m bundled up knowing I’ve got a clothing drop in 9 miles.

We go under the train station and there is our cheer team going nuts! Its a large group, so we are all spread out giving hugs to everyone. Then I hear a bunch of people yelling my name and see my wife there crying.

This can’t be good for anyone.

It turns out Ben is feeling really bad and she is worried. She’s also feeling like she is hugely letting me and my group down because the plan for the aid station at Animal Kingdom will not happen now. Two things immediately begin happening. Danielle is reassuring Sharon that we’ll be OK. She’s telling Sharon that as my running wife, she knows what my limits are and will make sure I’m taken care of and will finish. Meanwhile, I’m doing something that I would never have thought in my whole life that I would do.

I strip all the way down to my underwear on Main Street to change into my day clothes.

I was thankful for Danielle to help calm Sharon and I realized the humor in being just in my undies in front of hundreds of people and just had to laugh out loud as I changed. Changing clothes meant that I was going to severely underdressed for a while, but it would hopefully pay off once the sun came up. 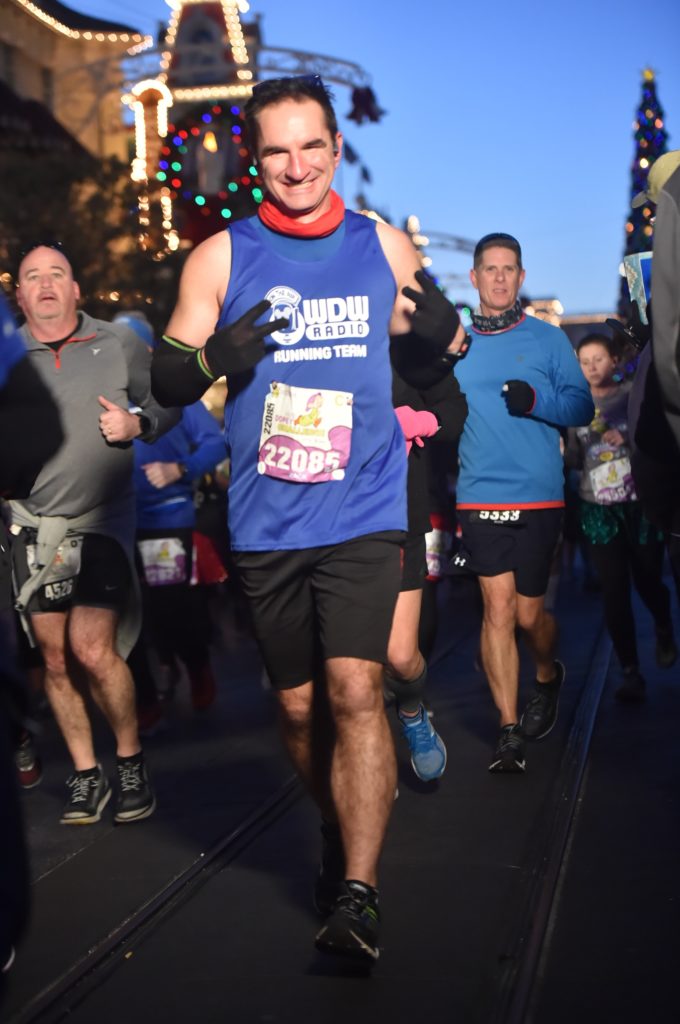 People say that they have trouble hitting pockets for good pics in their particular coral. Let me encourage you that you can still get them if are aware of your surroundings. Main Street was packed, but I was able to find about a 3ft pocket for this one. It doesn’t look like I’m by myself like they typically do, but it still turned out good.

They had some good characters back in Fantasyland again, but I was actually thankful that I didn’t need any of them. I set the team back about 5 minutes getting changed and trading things out. 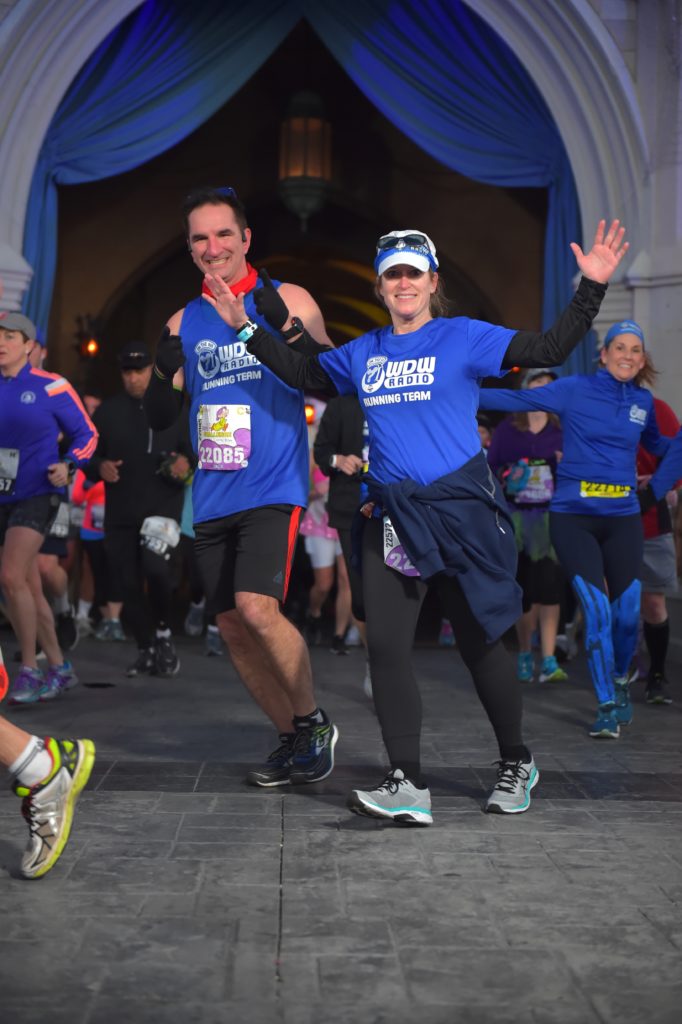 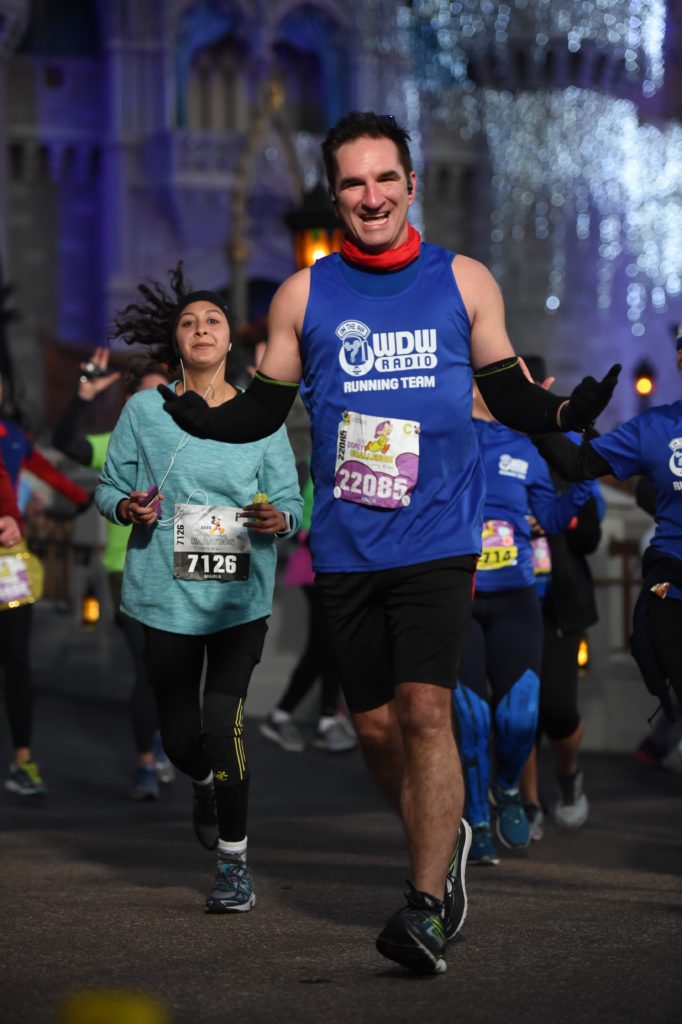 The sun came up at about the same spot that it did the day before. It’s at this point after MK that the course deviates from the half. You go down a service road that cuts straight to Animal Kingdom. Now there is nothing back here, so they will often load this with the best rare characters that you’ll find for the day.  Jen and I stopped for the Adventurers Club and then we stopped at a spot where they had the rides from a bunch of retired attractions. Of course, our selfie covers them all up except the sub from 20,000 Leagues Under the Sea. 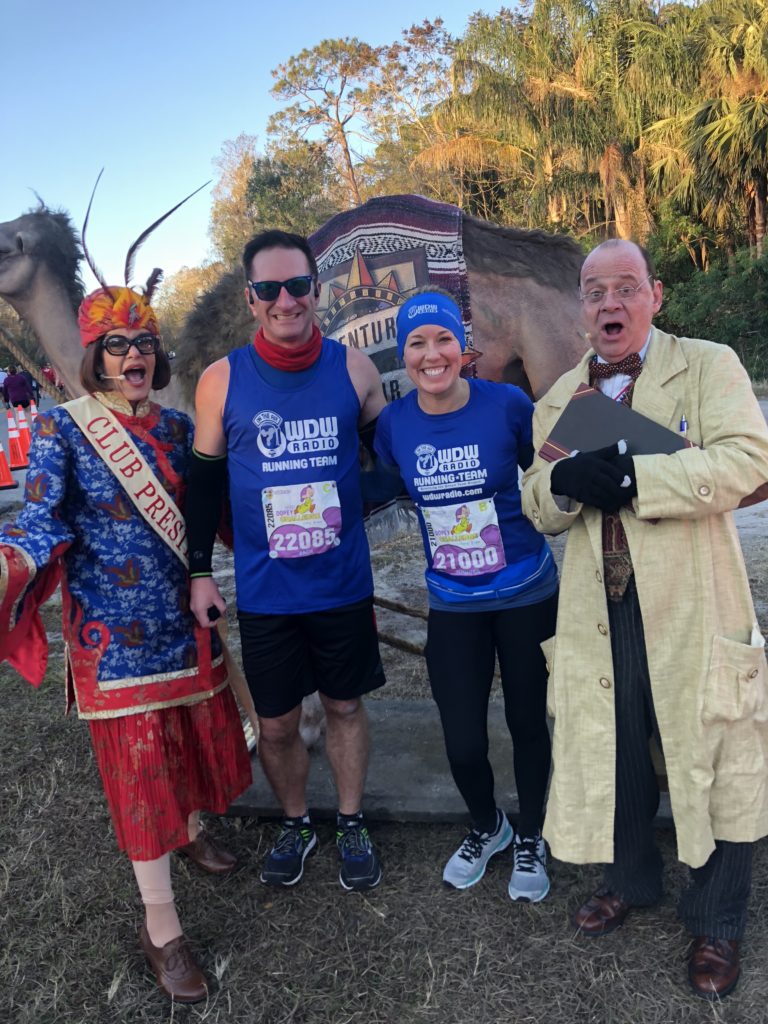 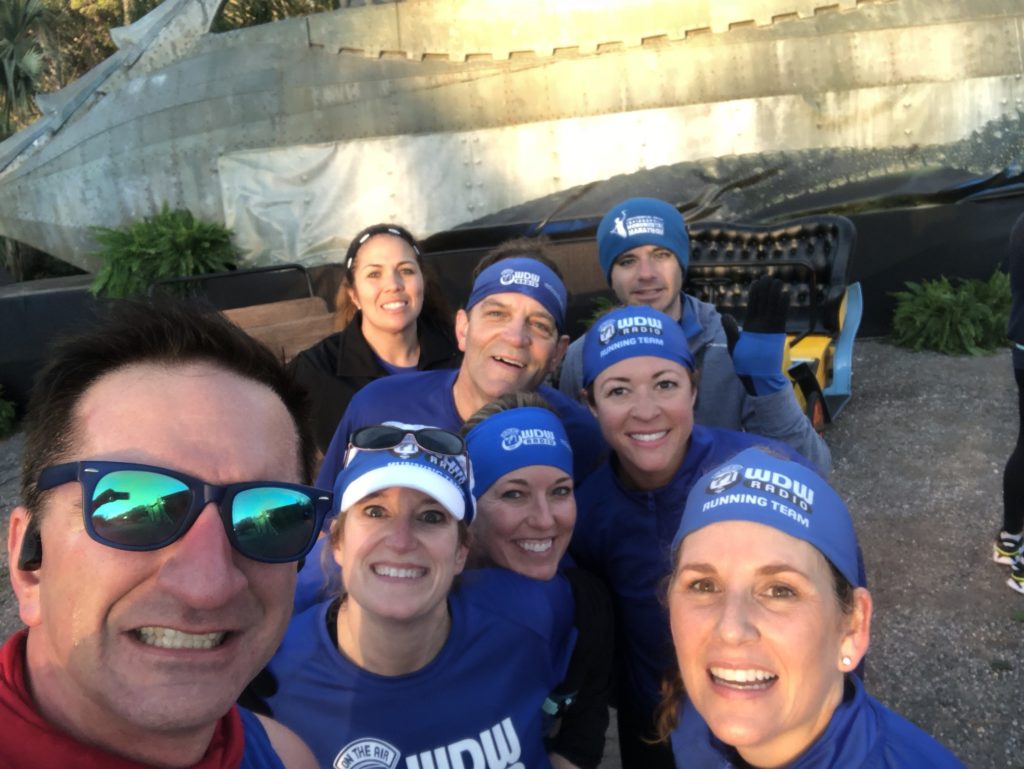 At the end of the stretch, I see something glorious. It’s the #1 character off of my character hit-list! 38 races, years of going to Disney and I had yet to meet Hades. I was super hyped up about it. Pain and Panic were a great bonus. 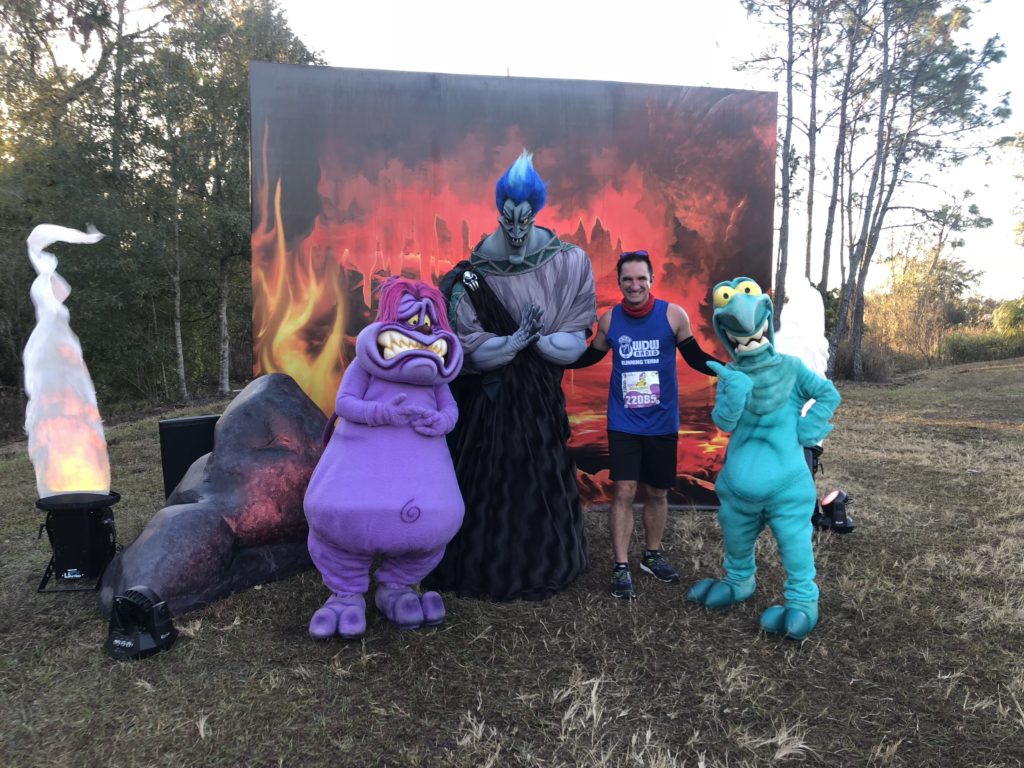 Right around the corner was one of the worst things about the course. They set up a water station directly in front of the water treatment plant. I felt bad for the volunteers. It was like they were handing out water and free poop biscuits out there.  This was also some symbolism for what we were about to go through. In the next 5 miles here is what happens.

Most people consider the ESPN area Purgatory. It’s over a 5k in distance where you are just weaving back and forth and it seems like you never get out of there. The first time I ran it, I stopped for all the characters which broke it up. This time we just barrelled through and it was brutal.  Thankfully Beth was in the last stadium to give us a quick cheer and some treats. She was a lifesaver! 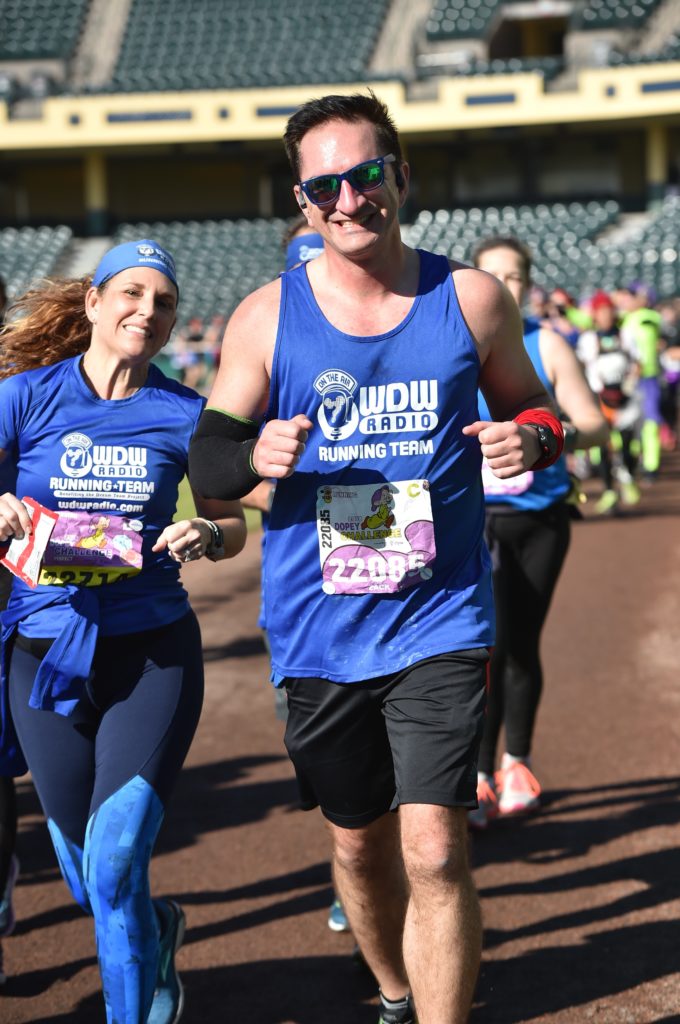 Things took another turn as we hit the 35k mark. Luke was definitely sick. We make it through Hollywood Studios which had a chocolate stop….that included candy corn M&Ms? Nothing like leftover Halloween candy in January!

After Hollywood Studios, you take a very small path over to the Boardwalk area. There is a transition that cuts a hard left, declines, and narrows all at once. Poor Sandra takes a spill, but gets up like a trooper and keeps going. At this point, I’m just trying to make sure that we all make it across the finish line alive!

We run across our cheer team again. I love them. They waited for everyone at MK and then picked up and moved to the end to cheer for us again. Cheering is not easy.  If someone comes to cheer for you. Thank them, give them a hug and take them out to a meal. 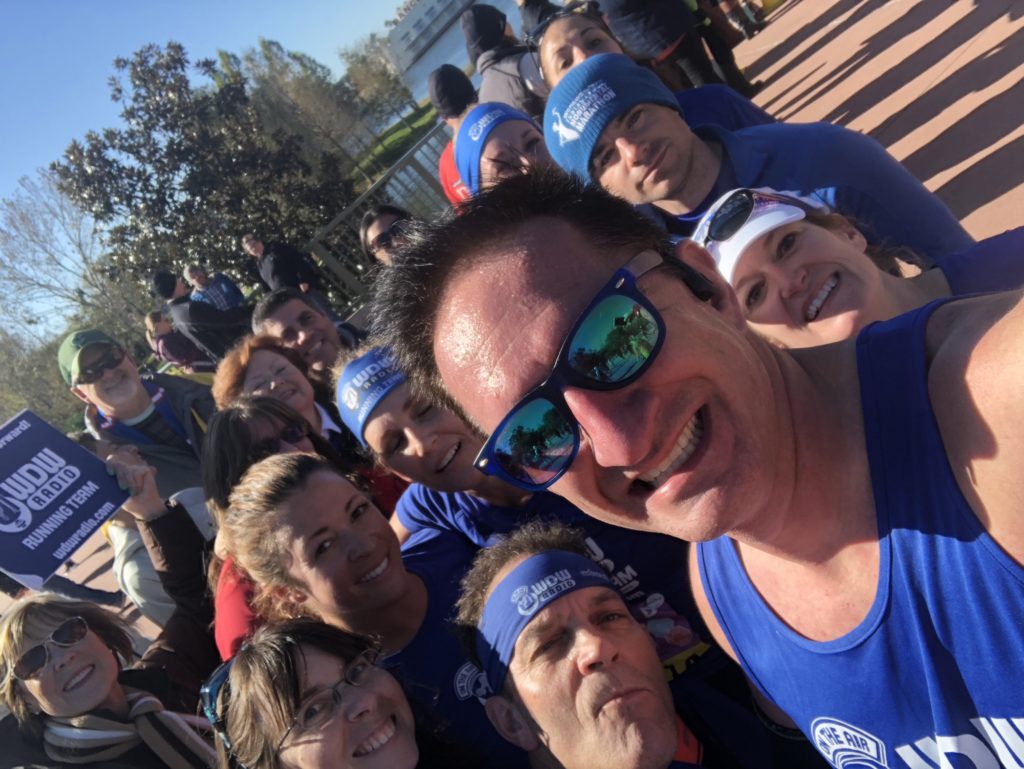 Epcot is hard, but you know that you are close to the end at this point. 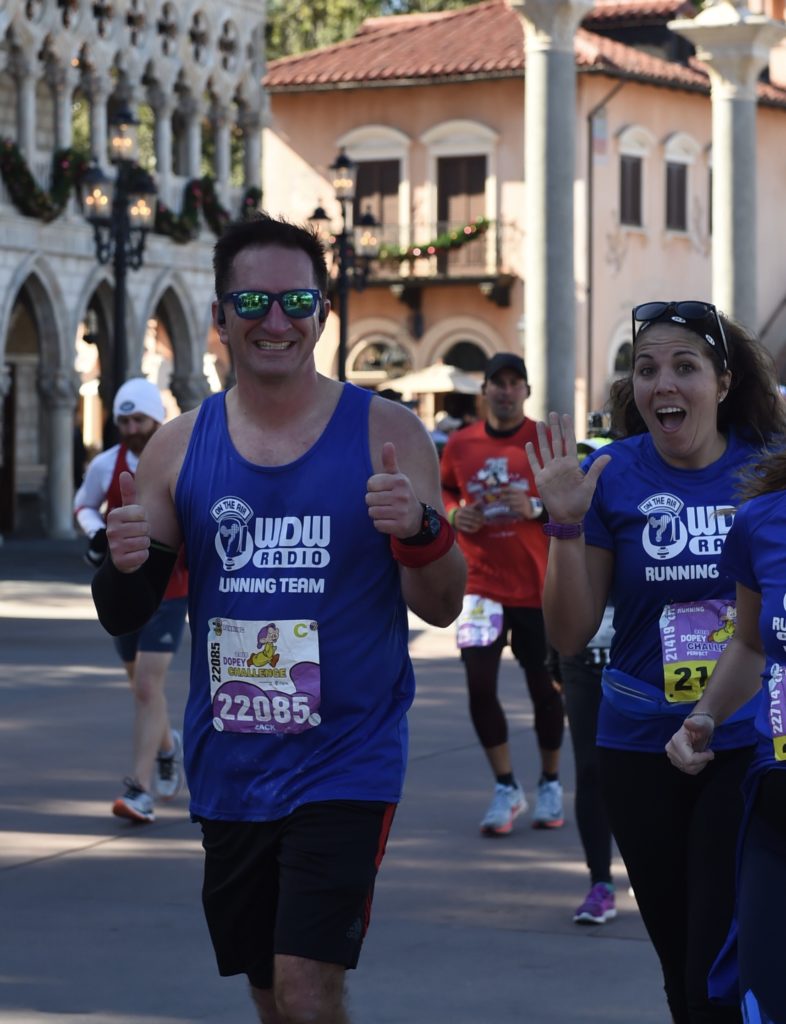 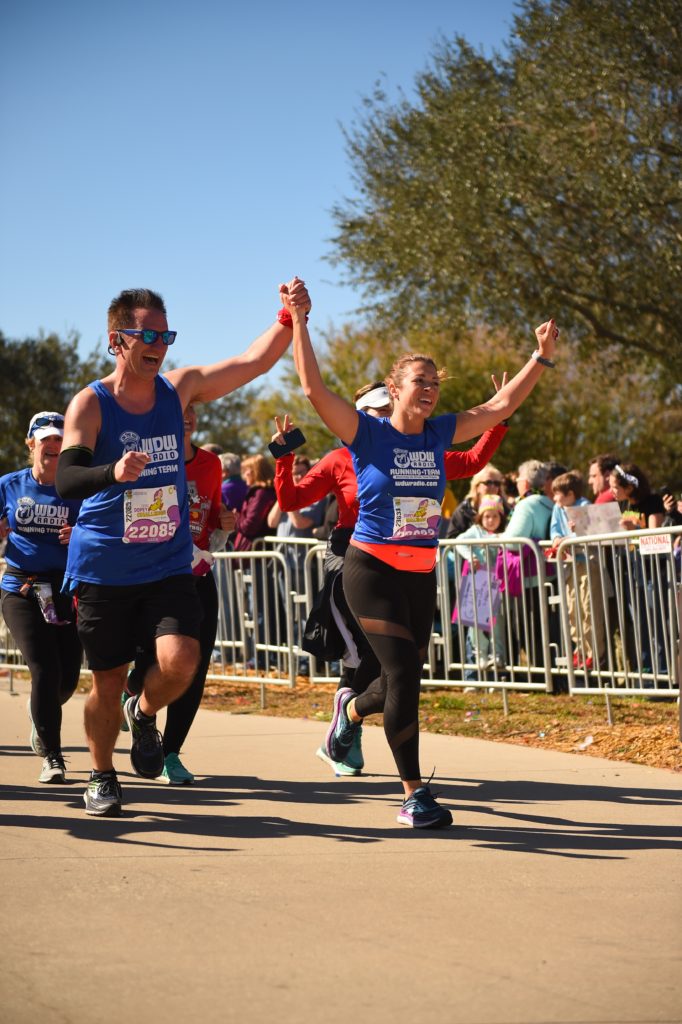 We all make it across the finish line and evidently nearly murder this young man in front of us. 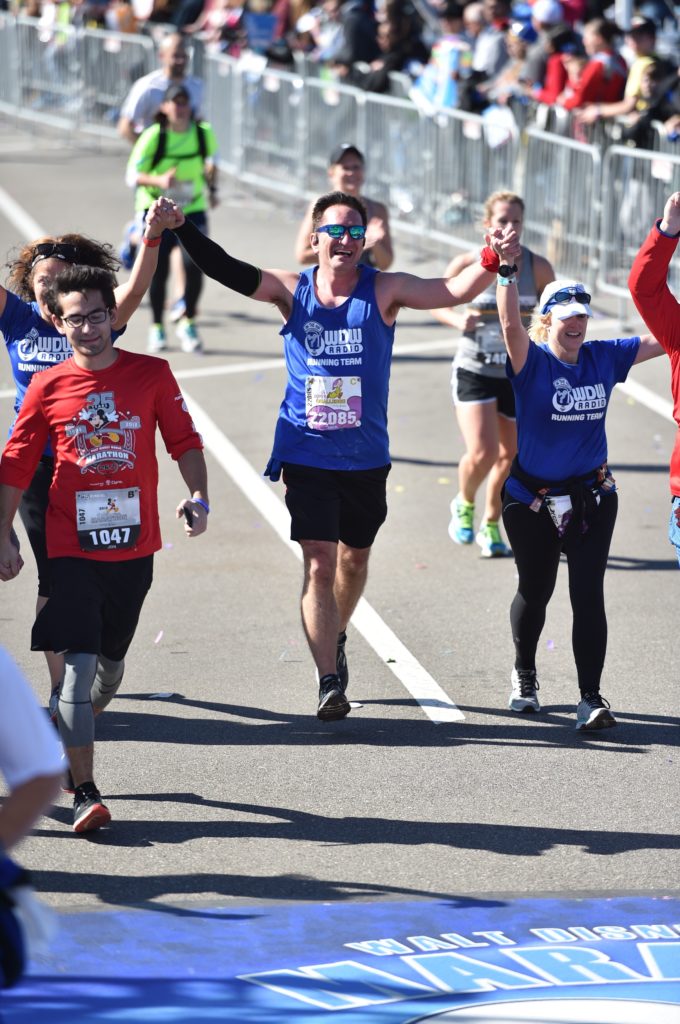 The girls and I cry for just a second (I’m secure enough in myself to say it) and then immediately take Luke to the medical tent. Final verdict: Kidney Stone.

The man just ran a marathon with a kidney stone. 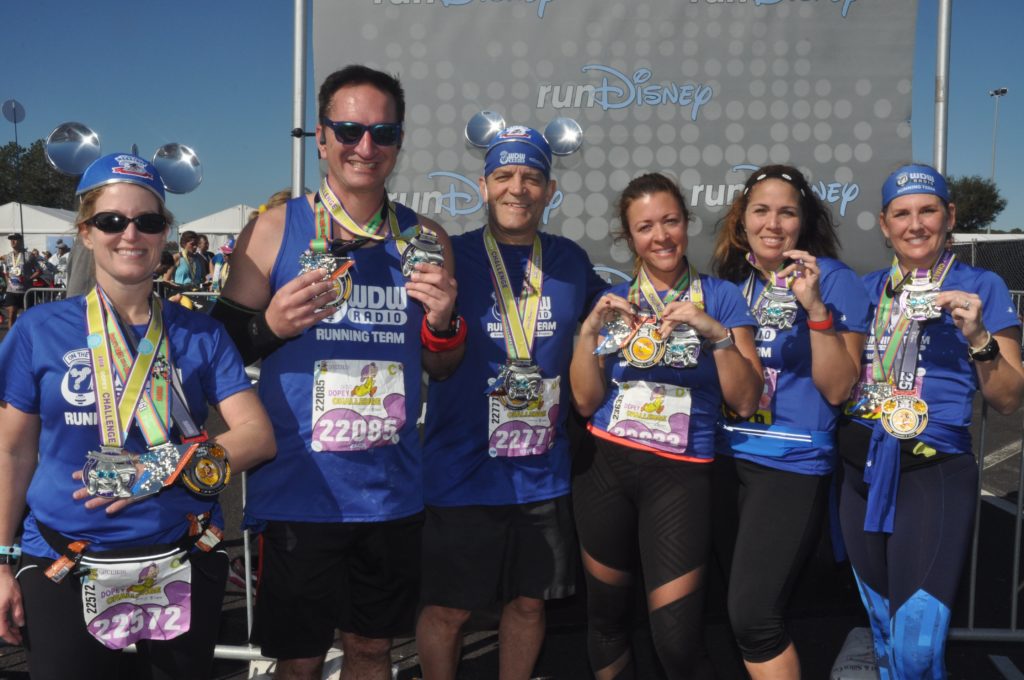 I’ve said time and again how much I love this team. They have gotten me through thick and thin. they have been there for me when I needed it, and I hope that I’ve been an encouragement to them when they could use it.

We all went our separate ways, but my personal adventure was not over. Sharon couldn’t make back into Epcot, so I was stranded. I took the time to get a message. (Always get the message after the half or full!) and got on a bus with no line. I don’t even know what resort it took me to.  I dropped my location to Sharon’s phone and set on a bench somewhere. I thankfully made it back to my real hotel a bit later. 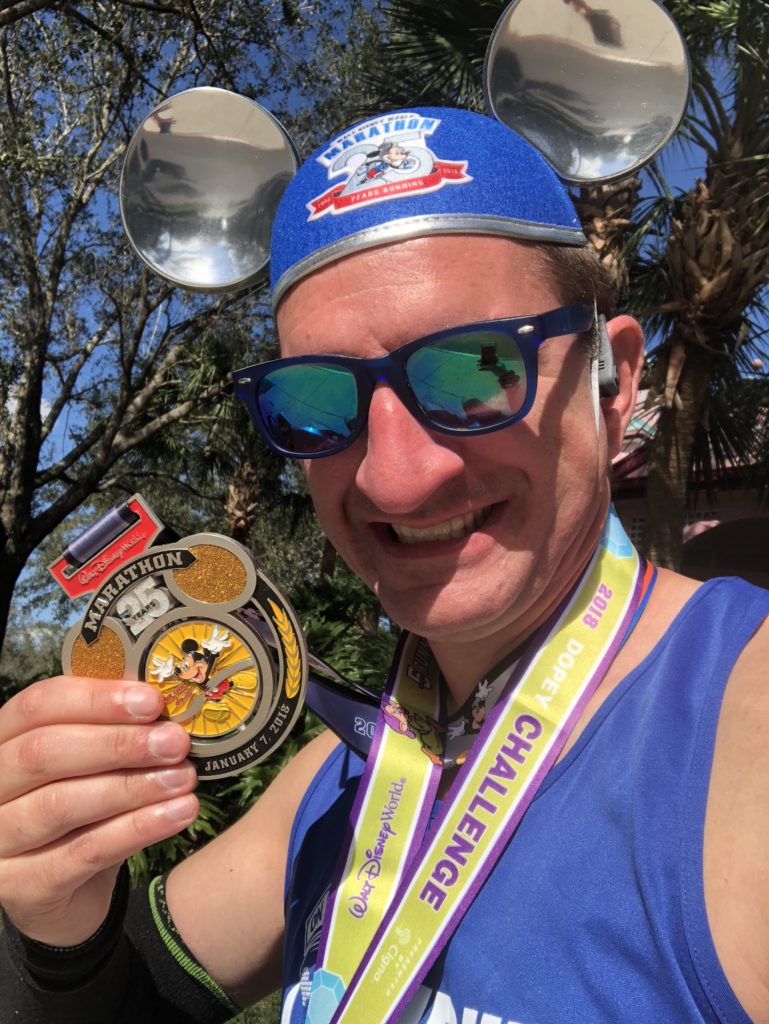 So that’s it! Another race series in the books! If you are on the fence about doing the challenge, let me encourage you; you can do Dopey if you put your mind to it and train.