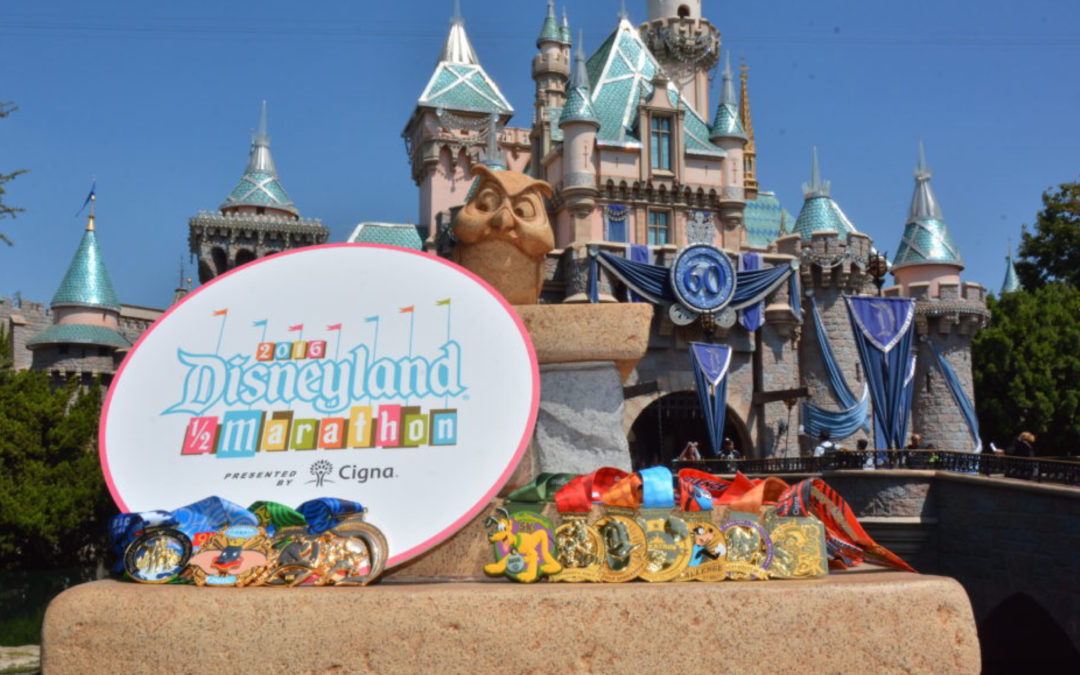 You laugh, you want to cry and you run through the occasional homeless camp

Its morning three, and I’m glad we are on West Coast time. I try to stay on Eastern time as long as possible when out here. It makes getting up in the morning a breeze. The downside is that if you get to bed at 9pm it’s super late.  My body didn’t jump to Pacific time until the day I left. It made the red-eye flight back a soul breaker.

I was a little concerned about this race. I hadn’t done this distance since I was last out here in May. To go further back, I’d only done this twice since April. As much as Luke and I had our Wonder Twins power activated yesterday, I’d suggested that he run on without me. This was going to be one of those things you’ve just got to dig in and will yourself through. Luke is also half road runner, so I didn’t want to be a burden to him.

Being the friend that he is, Luke fell back from A corral to B corral with me and said that he wasn’t going to do this one without me. Neither of us knew it at the time, but Luke would pull me through some demons to finish this race. 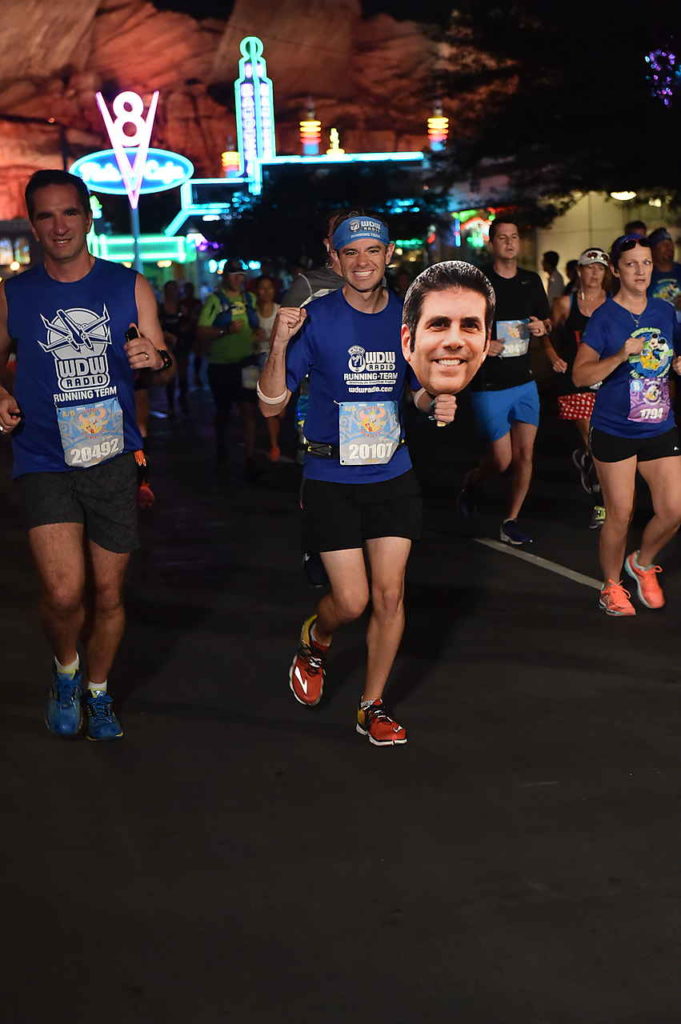 Gotta love the “You weirdos” look on the face of the lady to our left.

We fell right back in to our zone for the first six miles. There was a fun mix of characters out on the course today. 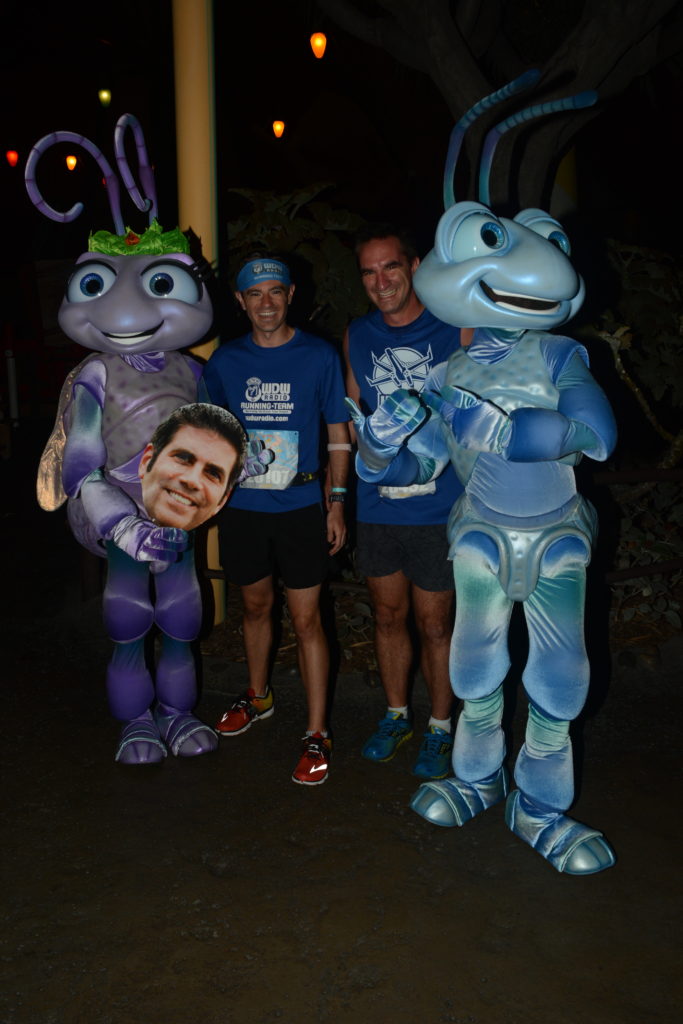 I love this picture. Flick is full on in “This guy” pose because I was joking with him. Meanwhile Atta has the 1000 yard stare holding Lou’s head. 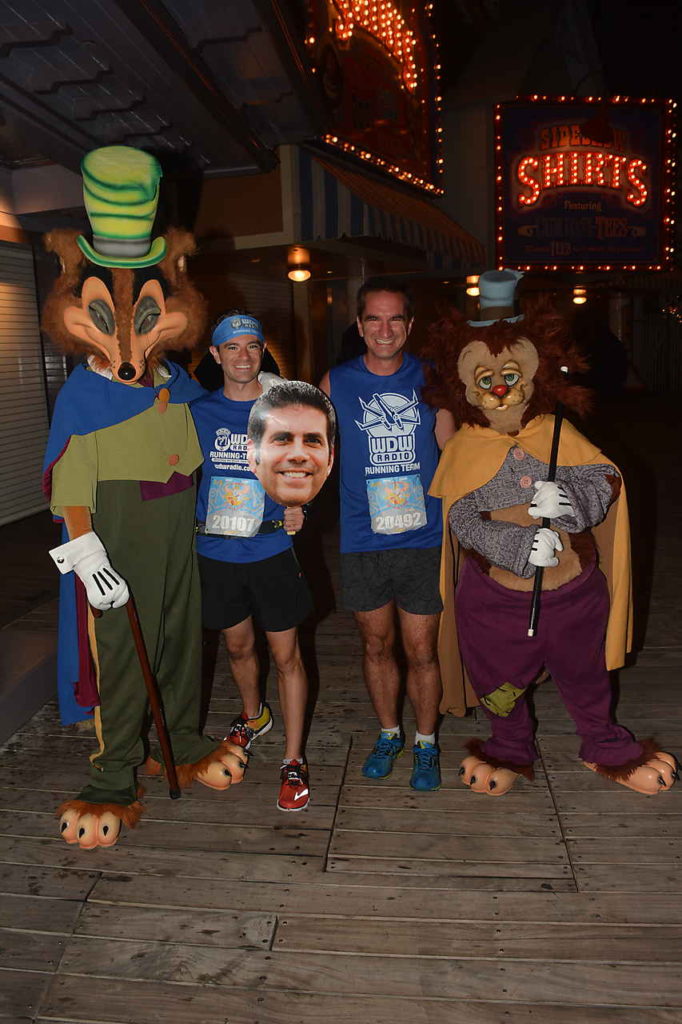 After we left the Pinocchio villains, I began talking to Luke about our almost obsessive hobby of character hunting, (over 550 different ones now) and let him know that if by chance we ran across any that I didn’t have, to be prepared for a freak out. Well it just so happened a pair off my top ten list was just around the corner.

I flipped! I mean I started jumping up and down and throwing my hands up in the air like I was at a Katy Perry concert. Luke thought it was rather humorous but he was excited too. Forget getting them at Disney World. It’s not happening under current conditions. I’d missed them on a surprise pop up by about 10 minutes out here a few years ago. The closest I’ve gotten since then is seeing them in a parade. I only count it if I can get a posed picture with them. Seeing them from afar doesn’t count. 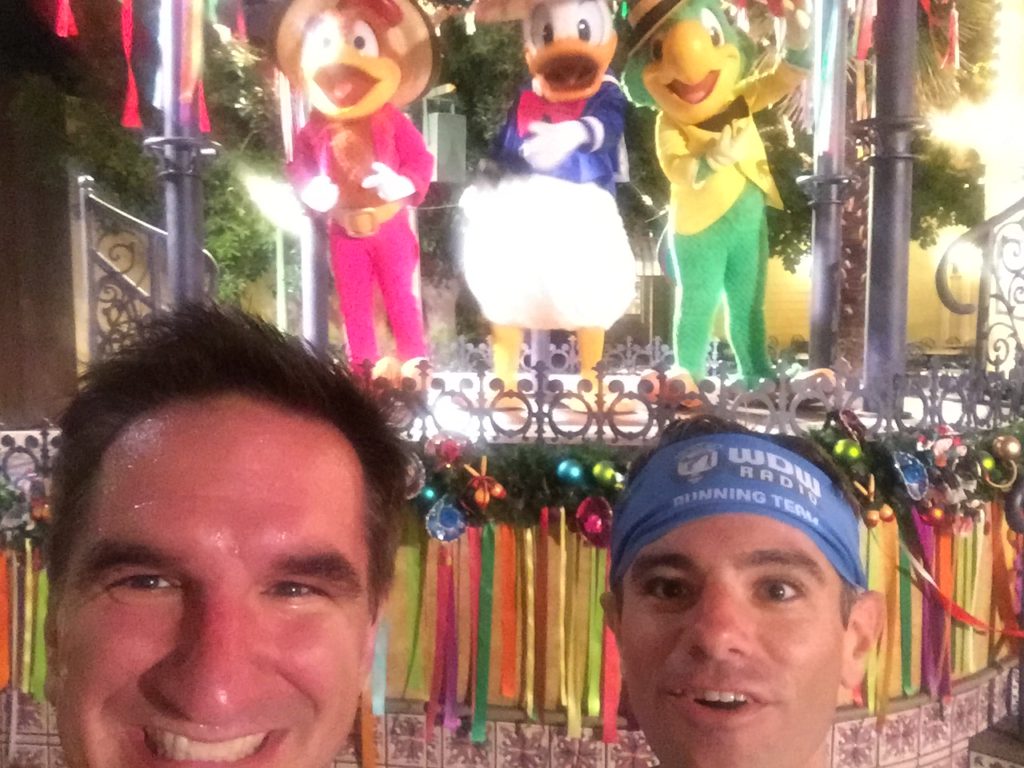 We picked up a few other of the race mainstays: Goofy, Max, Lightning McQueen and Mater.  We were having a few runners catch us on the course and telling us how they’ve seen us all weekend and loved us. The same thing happened with cast members and spectators. Where we becoming race famous?

It was fun interacting with the spectators. Some got really excited to see us, and some were bewildered that we were congratulating them on showing up. 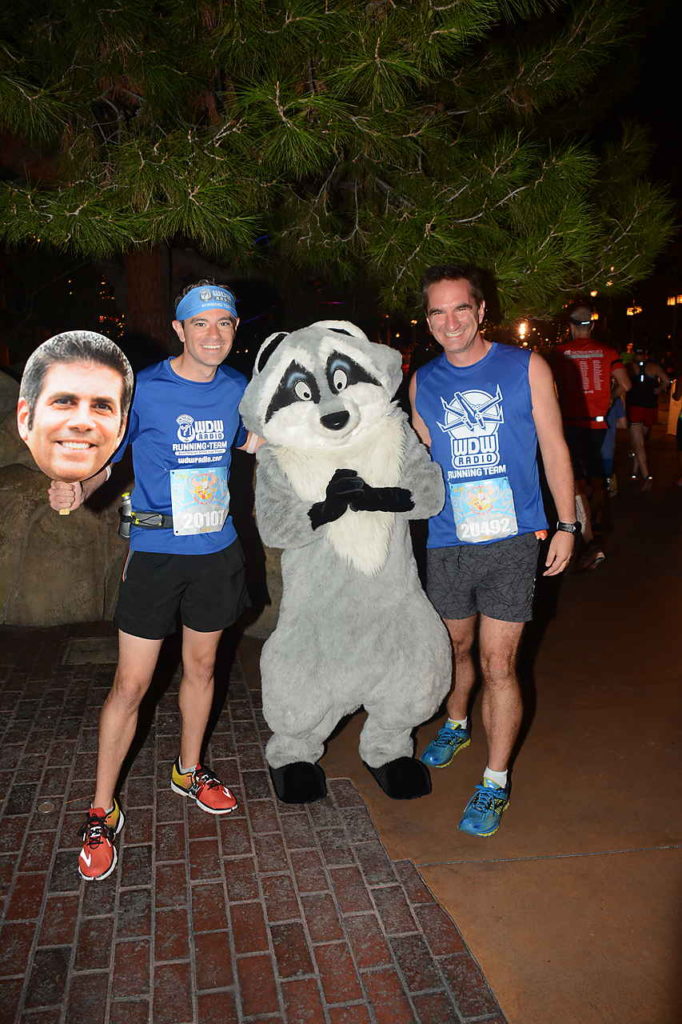 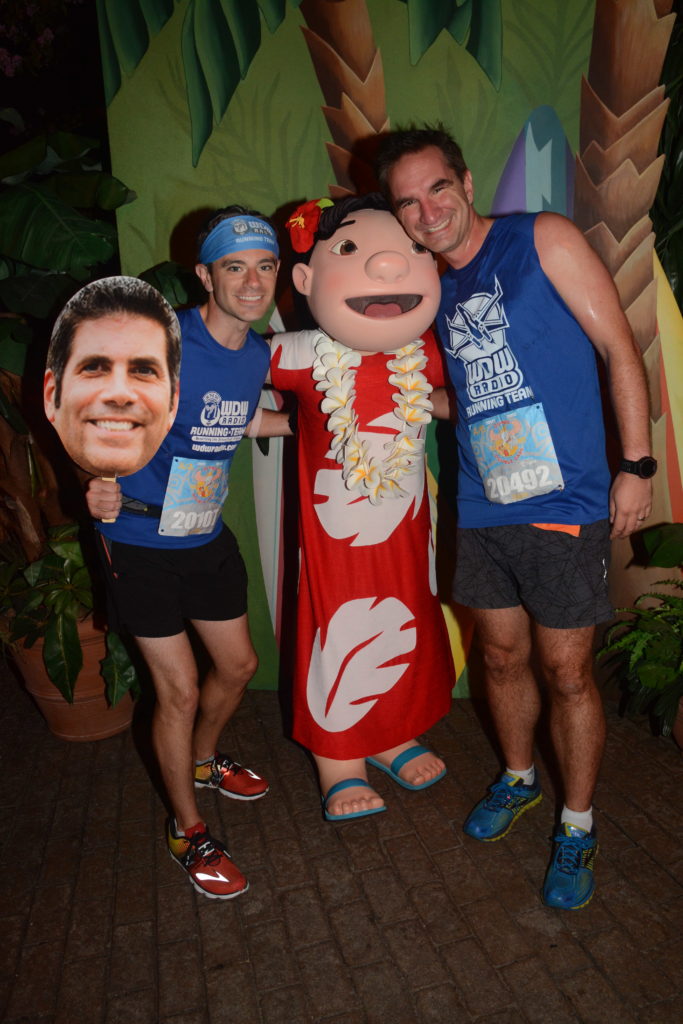 Remember my advice from the 10k about getting good pictures? Well Luke was bubbling like a champ at the race today. It works people! 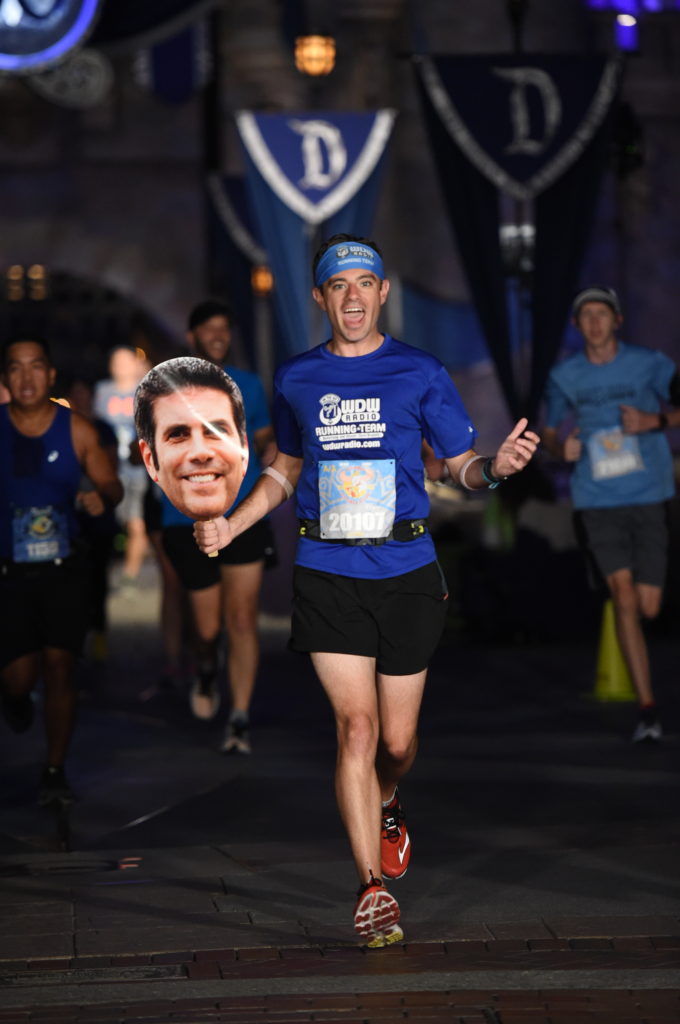 We had several that used us as pacers throughout this race. One was this gentleman from the UK. He basically laughed for 4 miles as he watched and listened to us. Glad we could be a good comedy act for you good sir.

It was time to enter out into the wasteland that is Anaheim. There’s not too much going on out on this piece of the race. It’s 7 miles of just get it done and finish. They did have more than last time out today though and the route was different from before, which was nice. 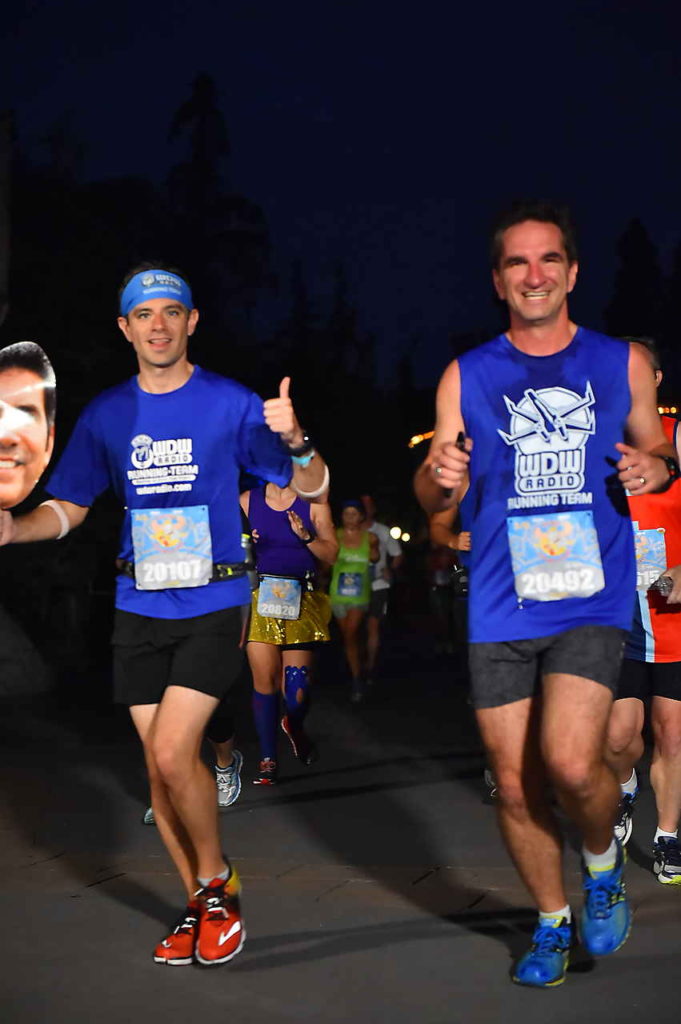 The UK guy is still pacing us at this point. (Right behind me)

This part of the course was really tough for me. At the Disney World races, I can actually run on less training because I’ll get an adrenaline boost and a slight rest when I meet the characters along the way. There is nothing specifically Disney out here since it’s in the city.  They did have some good bands set up and we did stop for a Hispanic dance group. They danced right into us when we stopped. 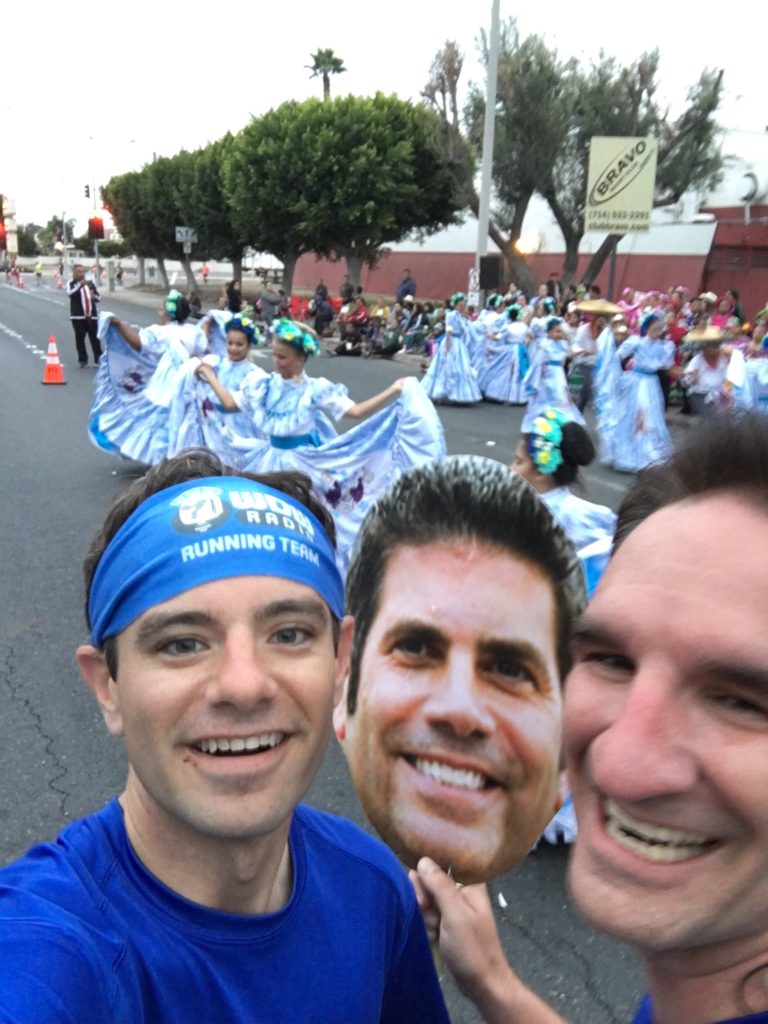 There were small pockets of spectators along the course. We made sure to greet them whenever we saw them. They also had pretty good signs out too. One giant sign just read BGR. Was it a sign for boogers? I mean all the hip places are taking vowels out of words these days. Bangers? Burgers? It turns out it was likely for Black Girls Run. They are a nationwide running group that has a huge chapter in Atlanta. They are a fantastic group and I’ve never met any of their runners that I didn’t like. Booger on ladies.

They had over a mile of classic cars out on the course which was pretty neat. Luke and I each took a side of the road and greeted each driver and family and we made our way through the gauntlet.

We transitioned off to a running trail that went through a couple of homeless camps. I’m sure they weren’t prepared to be woken up by several thousand runners. I started to deal with some demons at this point. It’s tough when you don’t know what to expect and your body is telling you to stop.

We did get a boost going through Angel Stadium.

It was pretty incredible. There were hundreds of boy scouts and their families in the the stands. I also got shout outs from the announcer as we entered the stadium. I got a high five line going that went at least 50 people long which was fun. 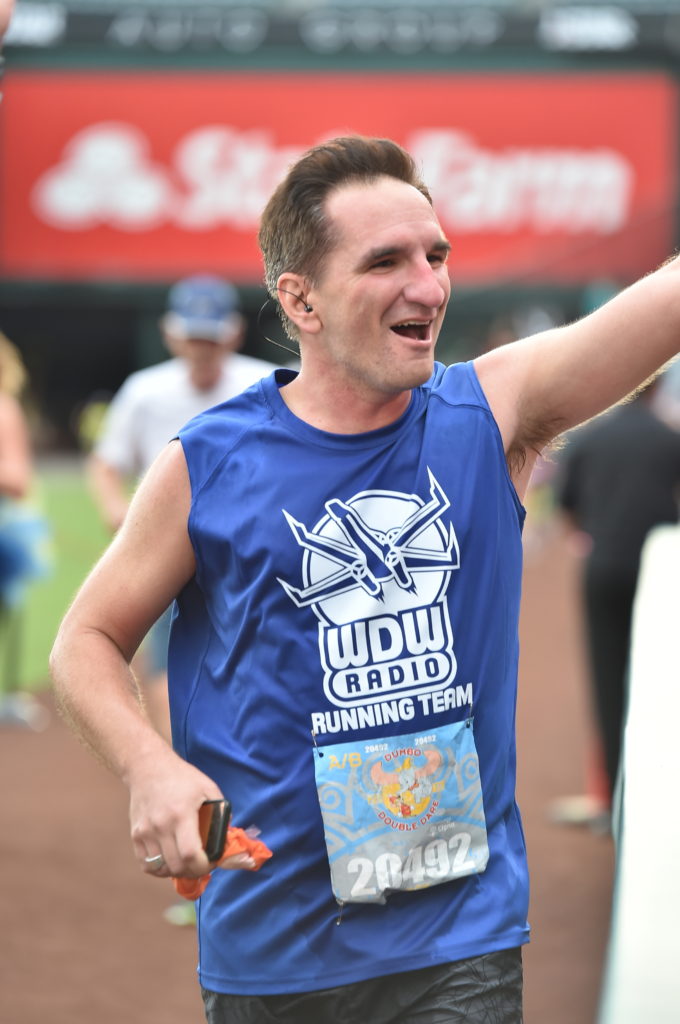 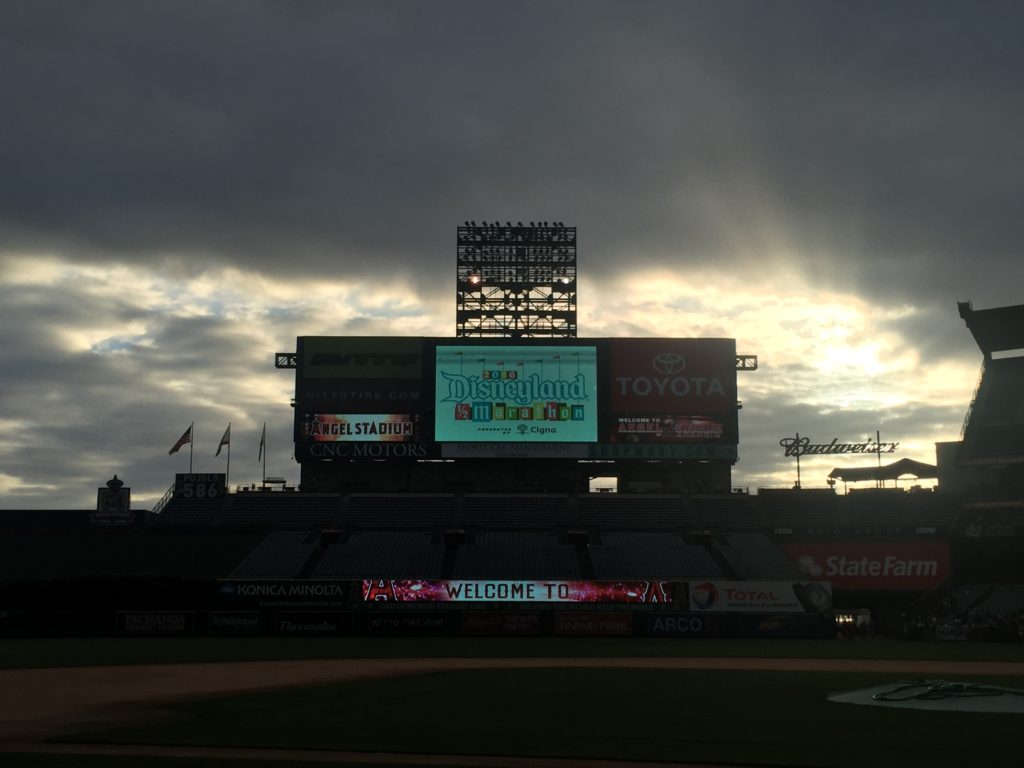 The last two miles were really tough. I was acknowledging the demons at this point and starting to think to myself, “It’s OK to walk or stop, you are hurting” Luke kept me in the game though, encouraging me and picking up the hype piece for me when we passed through some groups. I just didn’t have the energy to go crazy anymore.

During the last half mile, Luke went wide left to get in the crowds faces and get them going. This game me a chance to hug the short track and slow down enough to get some energy for the final spectator push. We turned the corner and both started going nuts for the crowds. We again got shoutouts at the end from the announcers. Another one done! 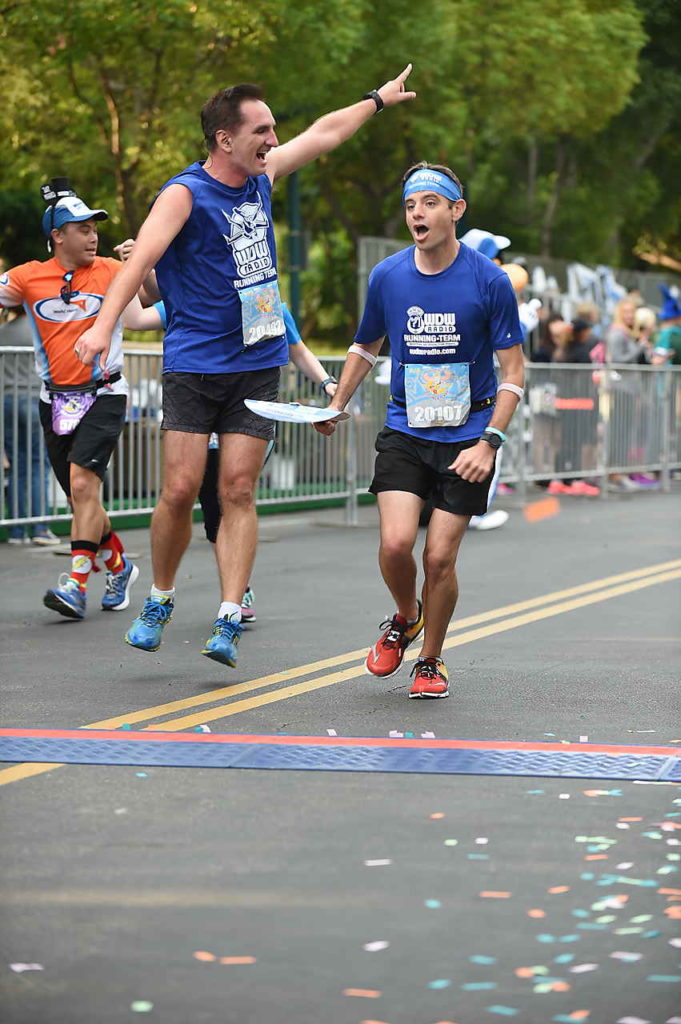 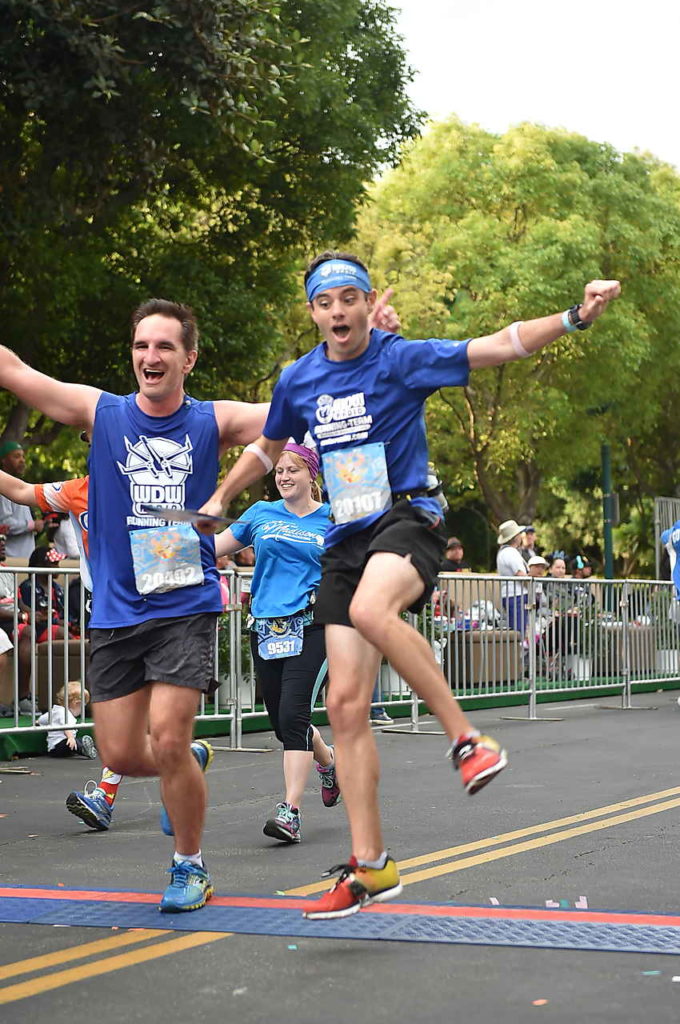 Of course our photographer was waiting on us at the finish. We had fun doing all his poses. 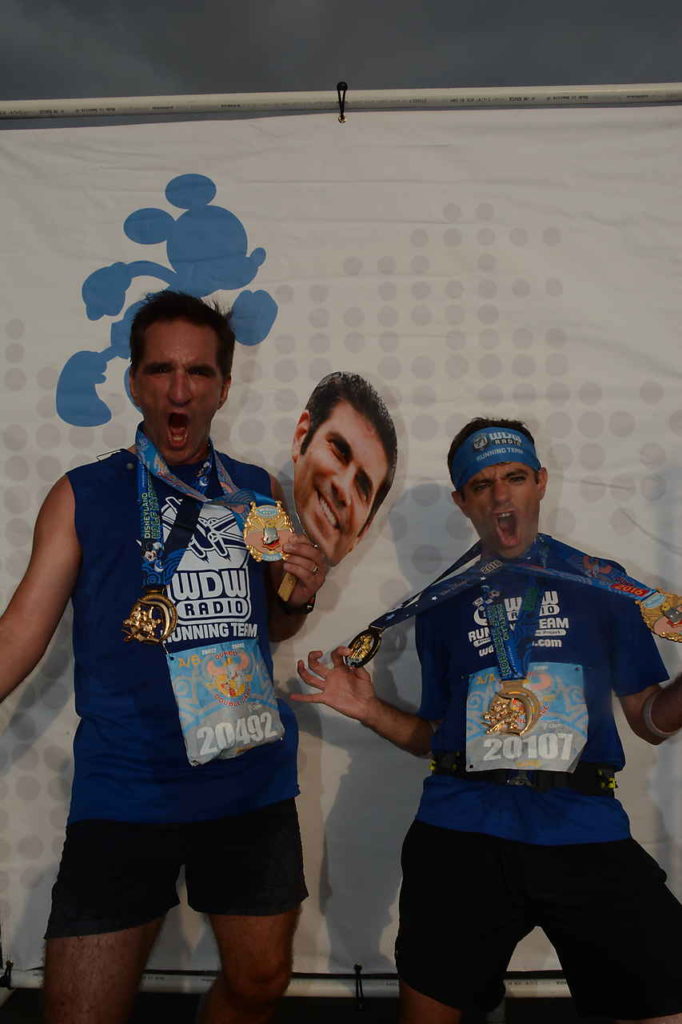 We couldn’t finish off the weekend without a picture with our favorite photographer. Introducing Manuel everybody!!!!!!!!! 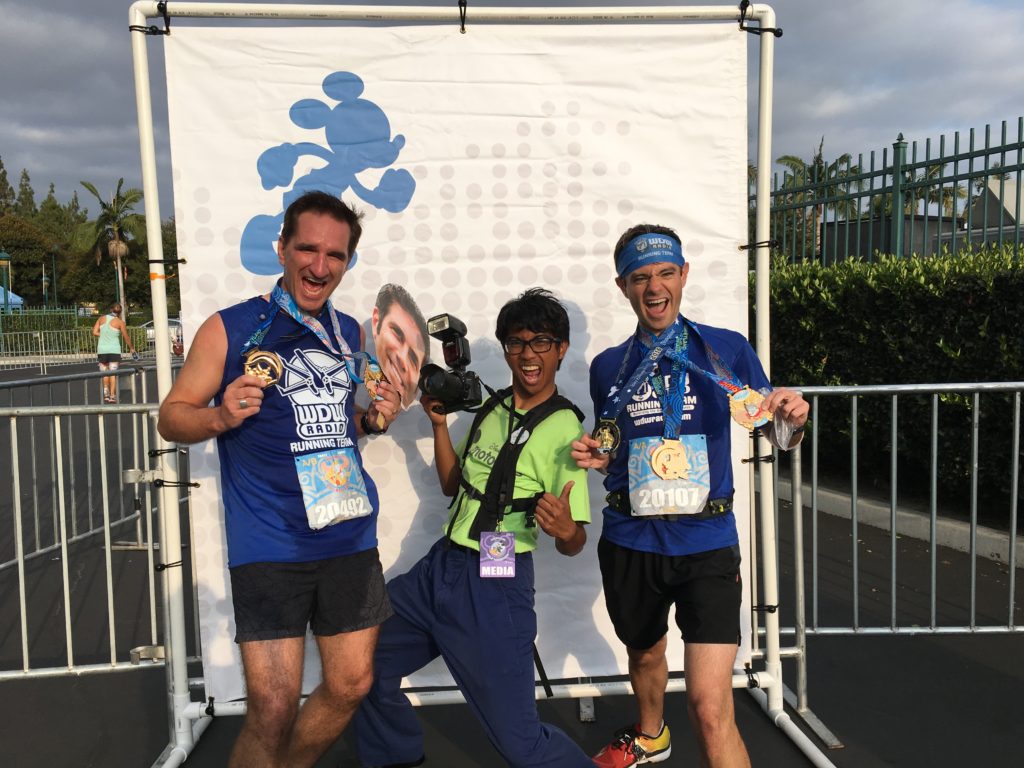 We must have finished right before Jeff and Barb. We got a picture together and then he made a suggestion for a future race that would go down as a running career highlight if it happens. Stay tuned on that one….. 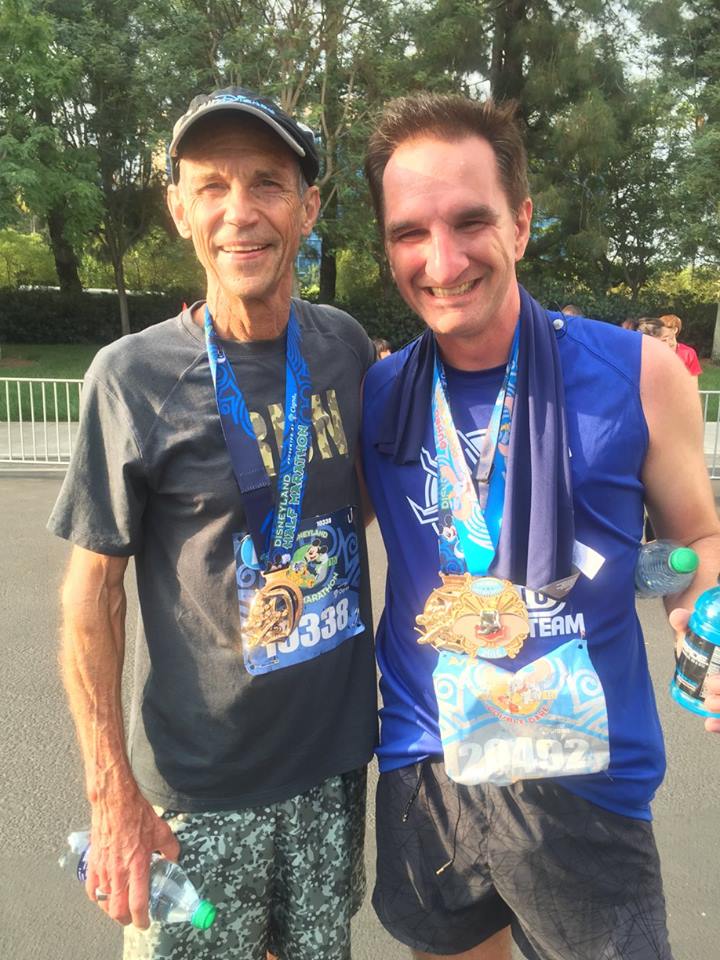 Luke and I enjoyed a nice massage together. (It wasn’t weird at all!) In typical fashion, I got the man-handler and he got a nice lady. My gal tells me how concerned she is and that I should immediately ice my whole lower body. Maybe those demons weren’t telling me total lies after all.

It was time to hit the parks again that afternoon. I brought in all the medals from the Disney World and Disneyland series to get pictures. The photographers loved all the medals! One did a whole mini shoot just with them. (The picture at the top of the post). Mickey was thoroughly impressed as well… oh and bonus on the Steamboat Willie Mickey! 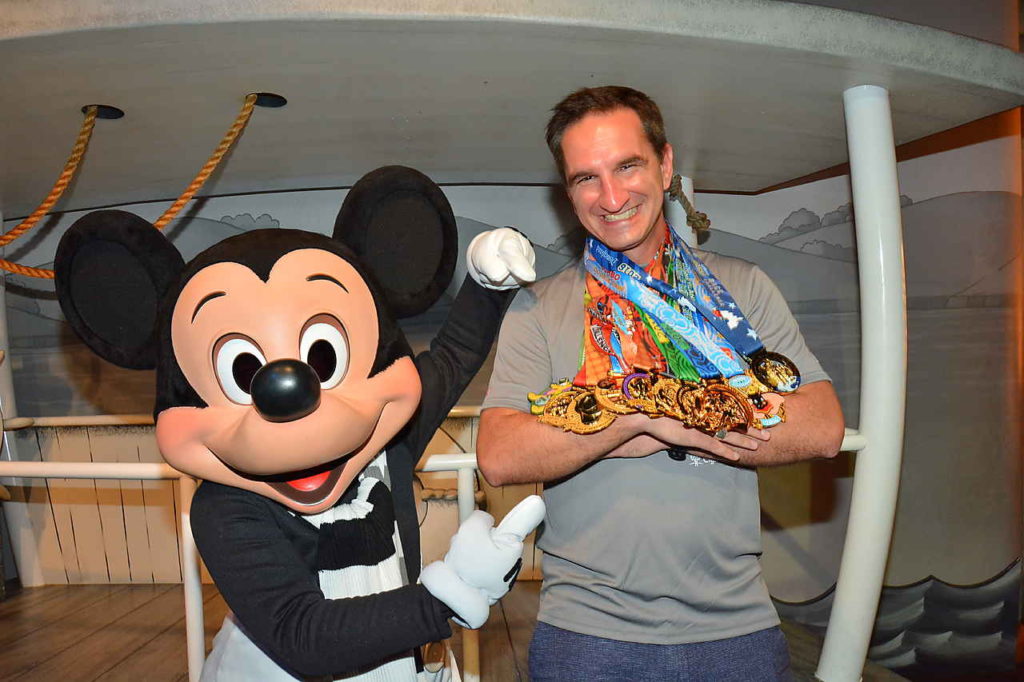 You’ll see Luke and I together again at the Disney World Marathon weekend in January. This is now the race I’m most looking forward to. In the meantime, I’ve got six more Disney races to take care of this year.

UP NEXT: The Expanded Wine and Dine Half Weekend!