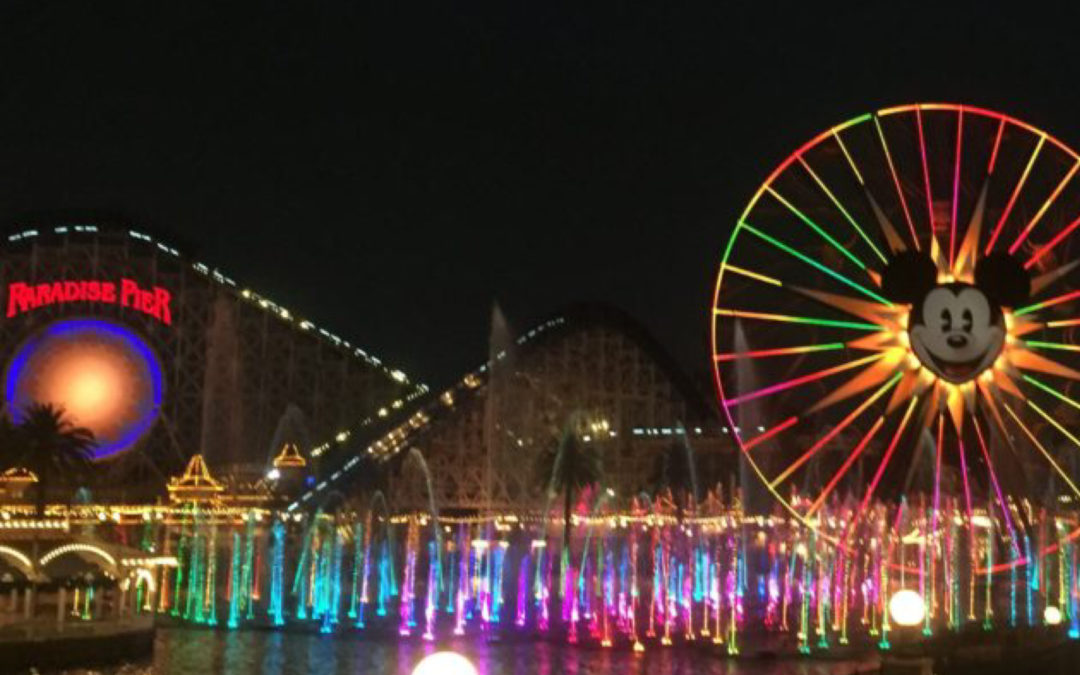 Here we are back for day two! We hooked up with Thaddeus beforehand and got a team picture before heading out to the corral. It’s always great connecting with folks you haven’t seen in a while. 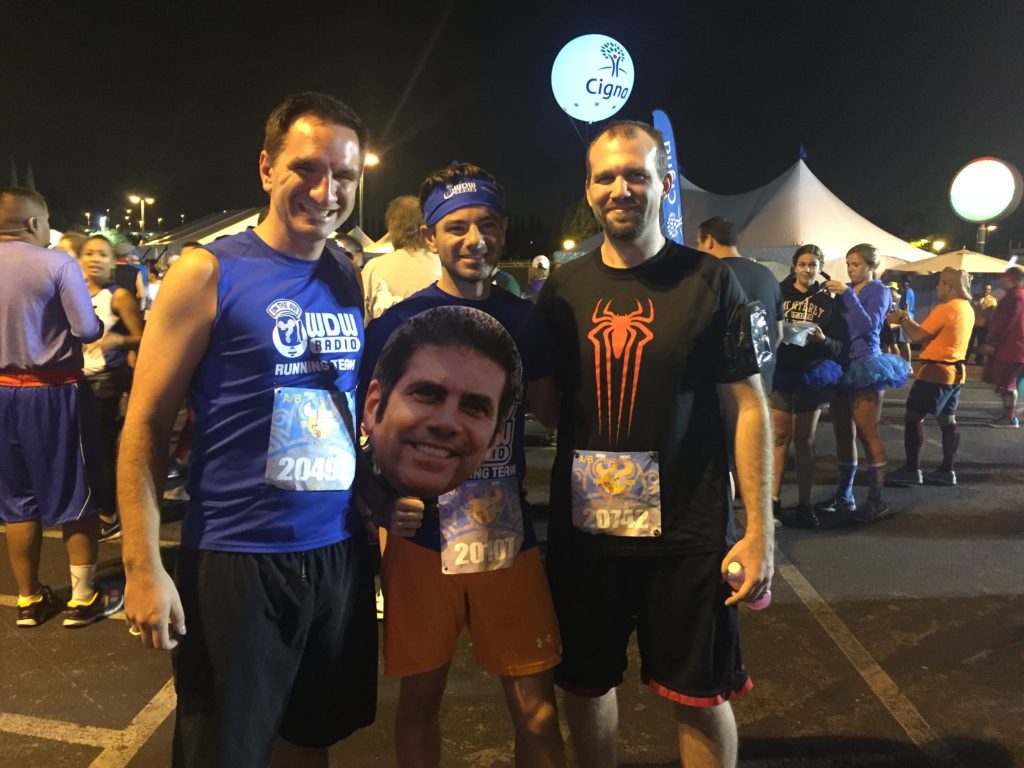 I get asked from time to time if there are any differences between the east and west coast races. There are a ton that I’ll cover in a future update, but here is one of them.  Disneyland builds little sets for each race while Disney World races use the same platform over the weekend.  I love some of the neat touches they put into the races out here. 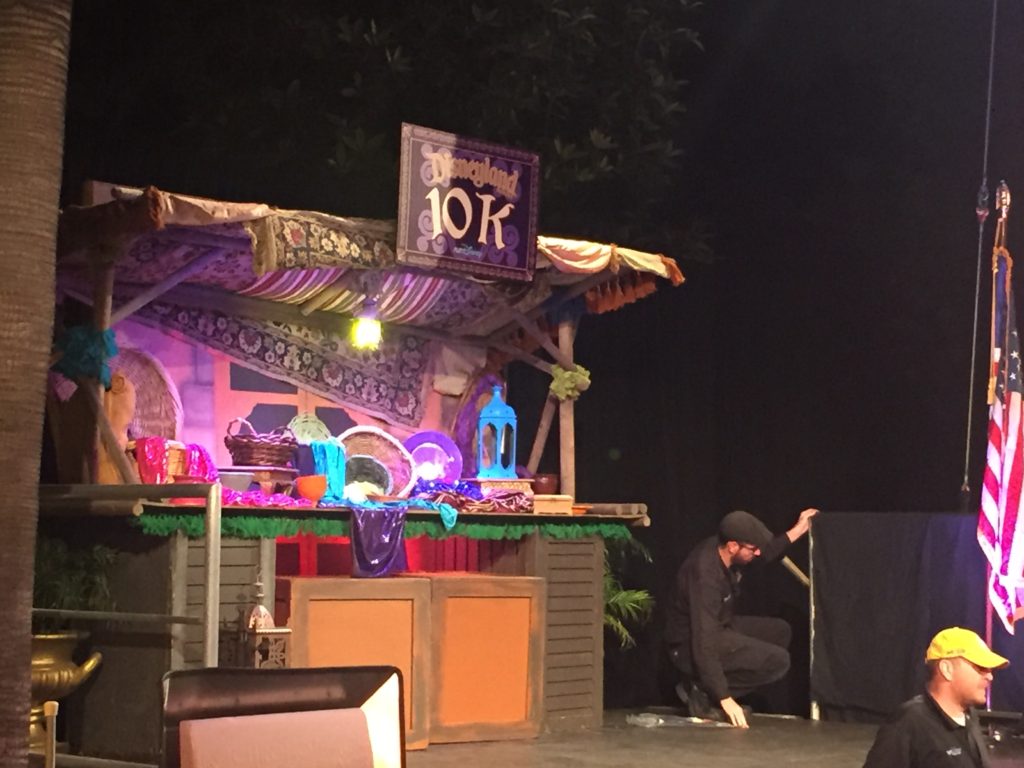 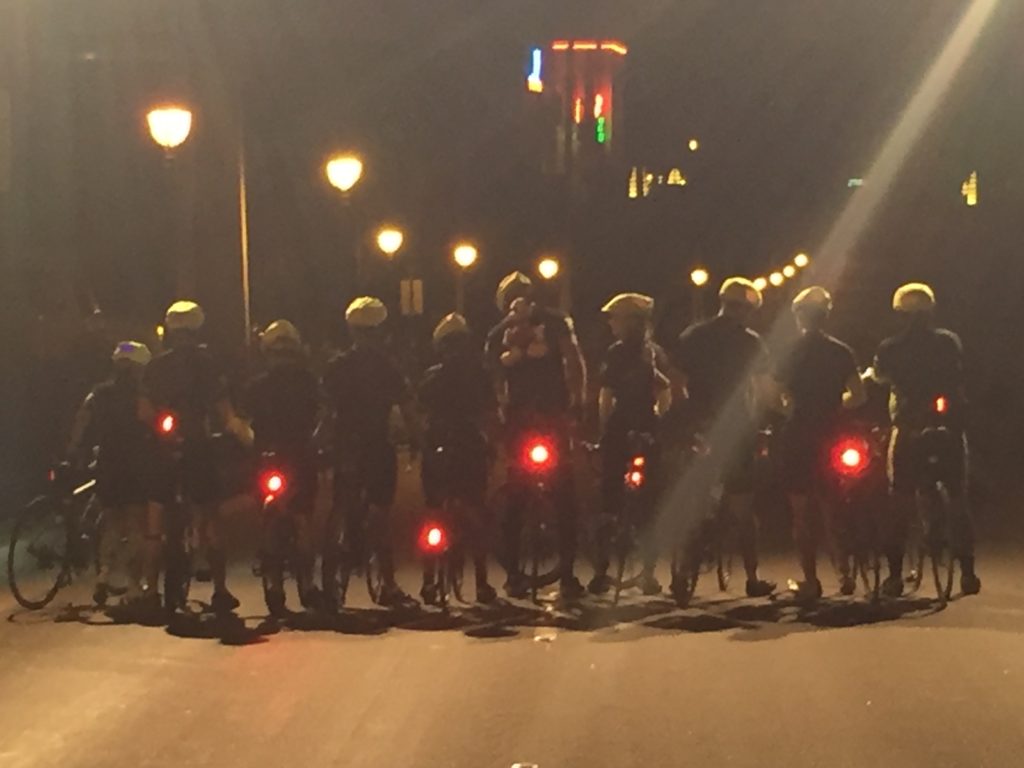 Our view of the pacers and medics before the race

Luke and I had a great time the day before. We greeted cast members and had fun interacting with the crowds. Something special happened during the 10k. We just clicked. We became peanut butter and jelly…….ice cream and churros……Space Mountain and a fast pass. Without discussion we interacted with and hyped up the whole course. What we were not prepared for was how many people would recognize us over the weekend. It was crazy!

It’s getting harder and harder to find new characters on the courses. I didn’t pick up any on the 5K, but we did get the DJ car from Cars on the 10K. You can see it at impromptu dance parties in the park, but you can’t get a picture with it. 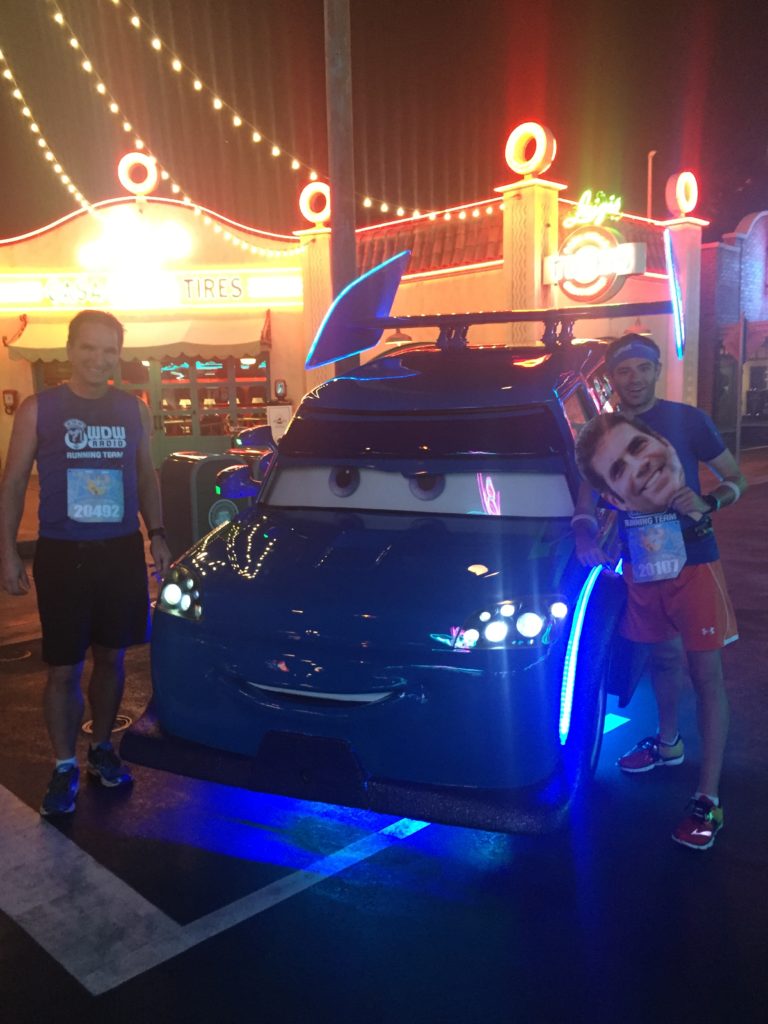 We turned the corner out of Carsland and the full Incredibles set of characters were out there. We had a great time with them and they were super fun. They loved the Lou head we had with us! 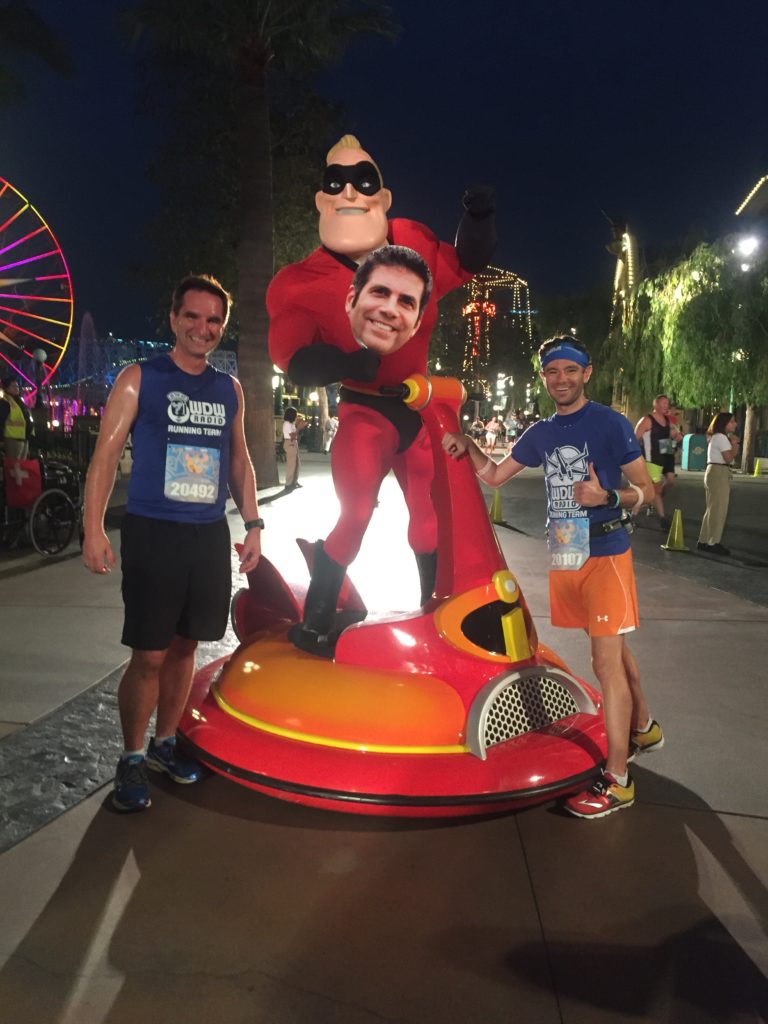 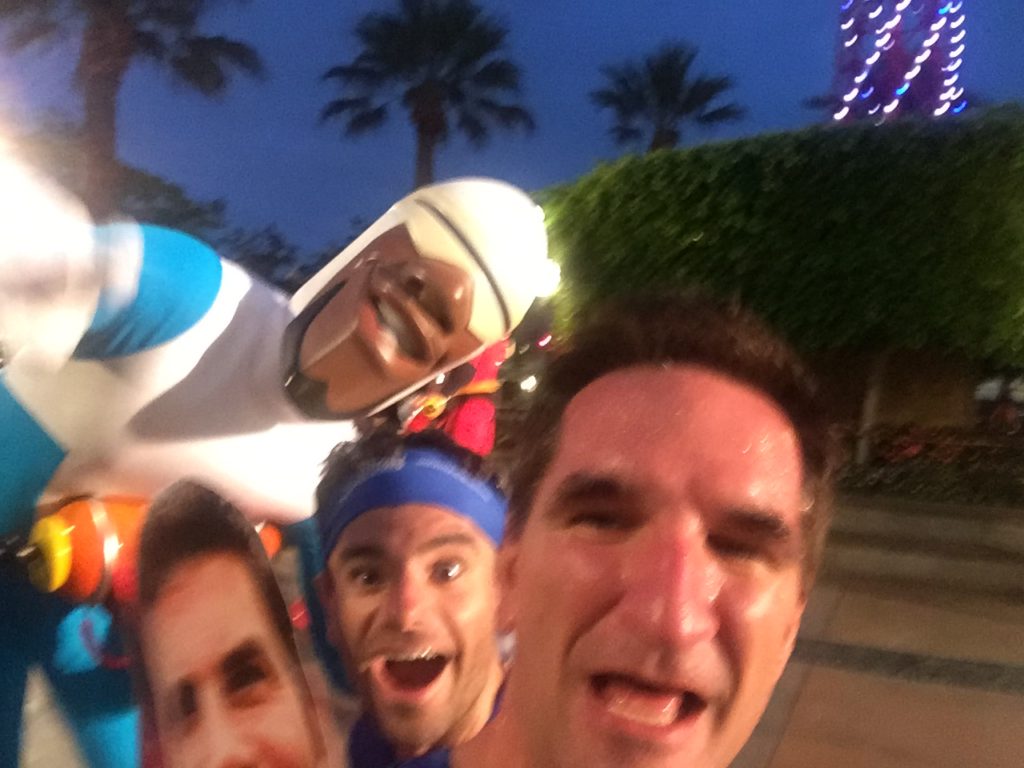 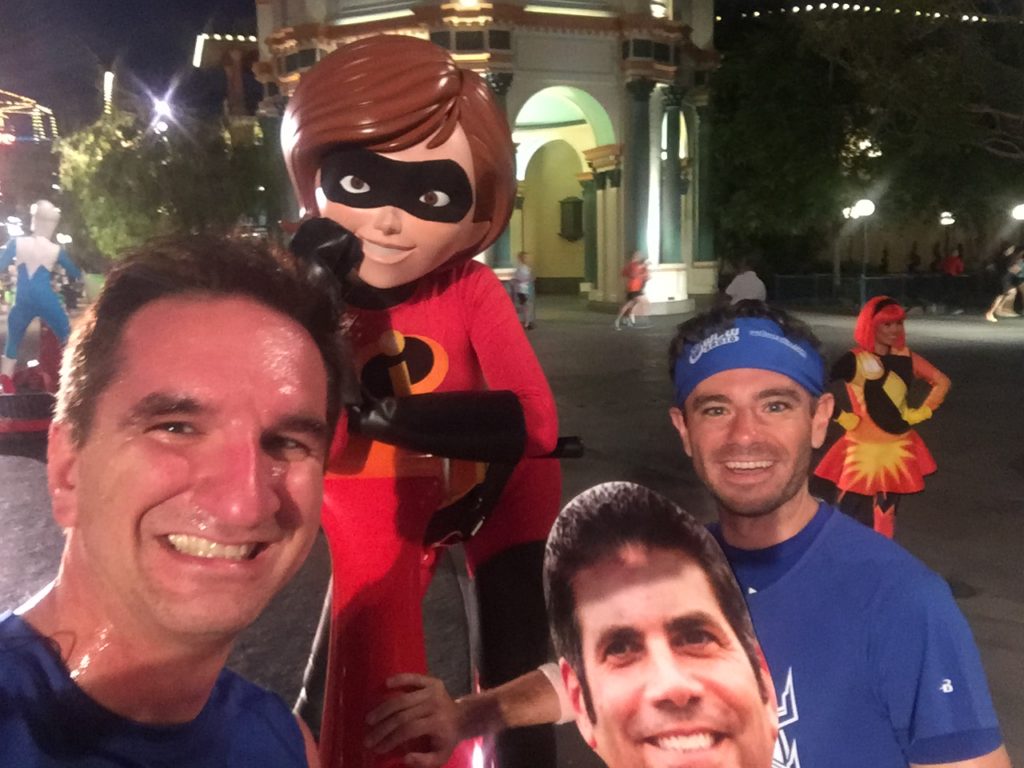 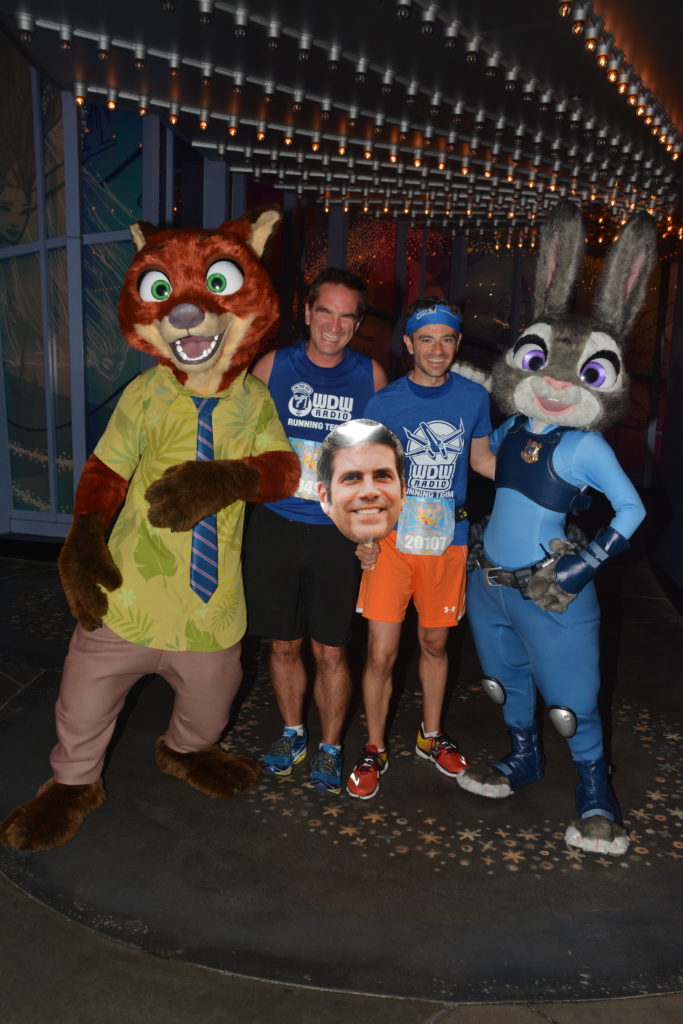 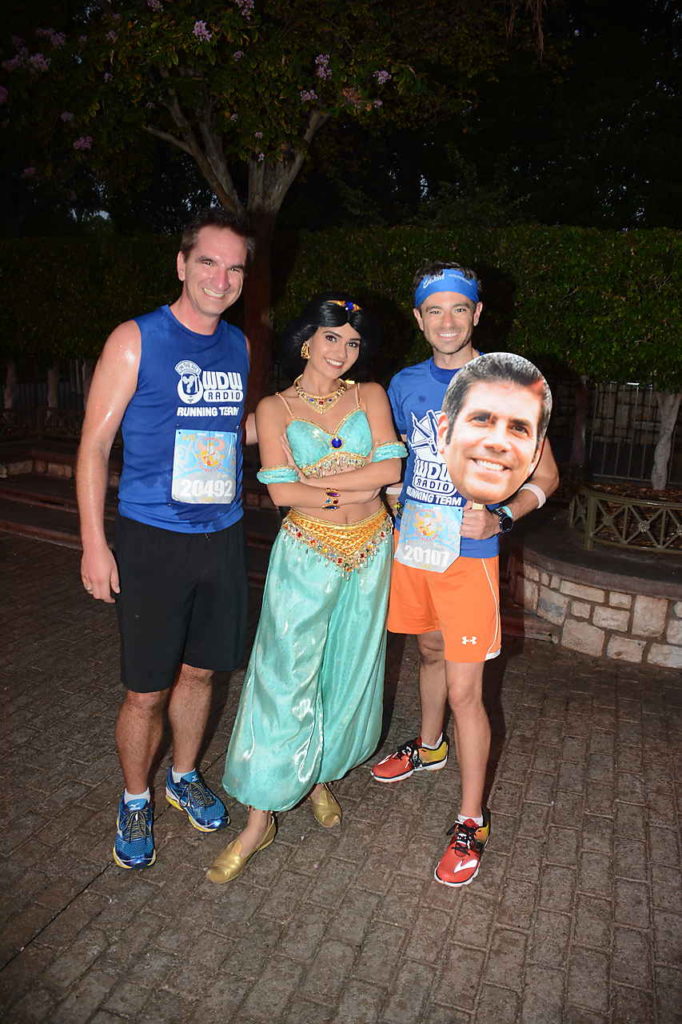 We didnt know it at the time, but this would be the last day Jasmine would wear this outfit. 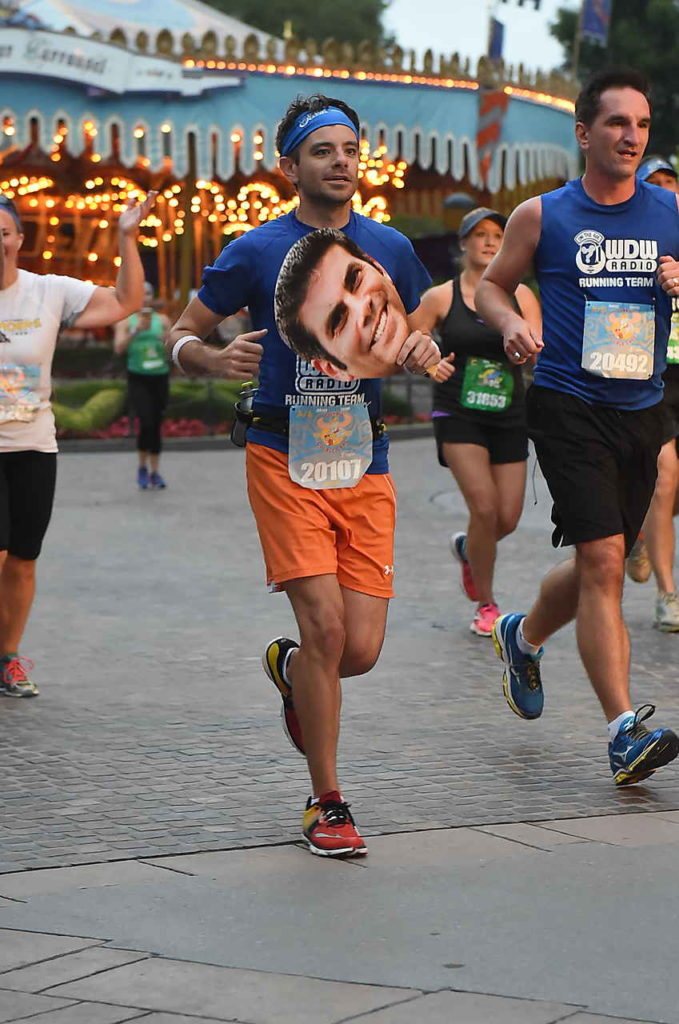 So getting those awesome clear shots from the photopass people are more challenging at the 10K and half. The strategy instead of trying to destroy everyone is to find bubbles…..areas between groups of runners. They are easy enough to find if you are looking and then you can get some pretty good shots.

You’ll probably either have to speed up or slow down, but it is worth it. You get the shot below instead of being the guy in the Texas shirt in the back. 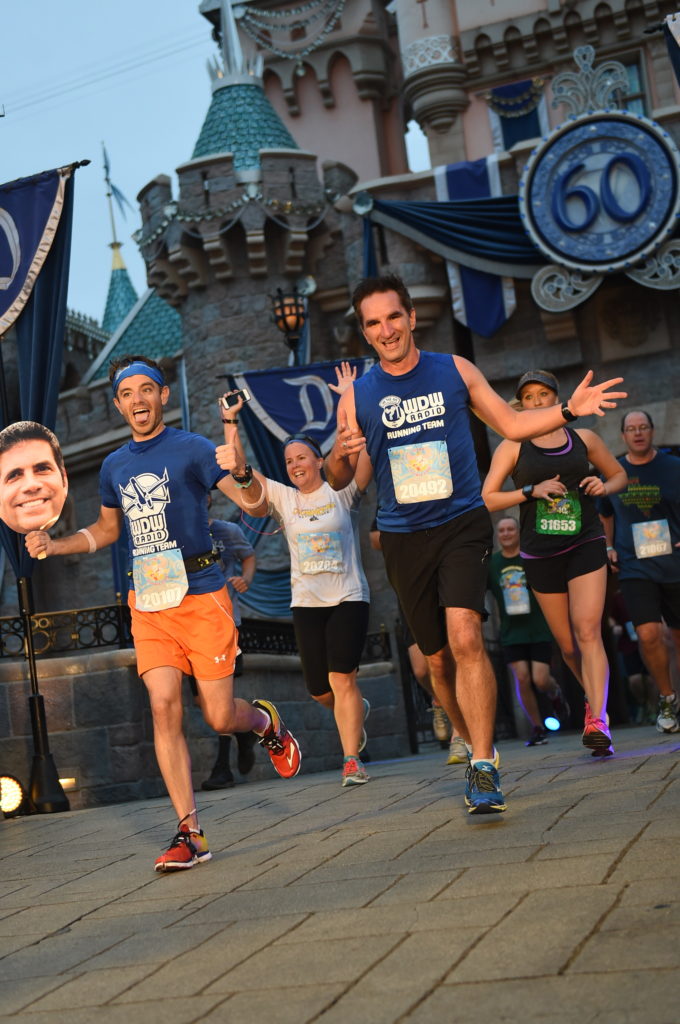 We turned the corner onto Main St and ran into Eeyore.  He was great for a couple of reasons. First a lady came up that was a Eeyore fanatic…. like screaming “Don’t go! Don’t go!” The second great thing was all the Eeyore impressions that Luke and I did about racing after we left. 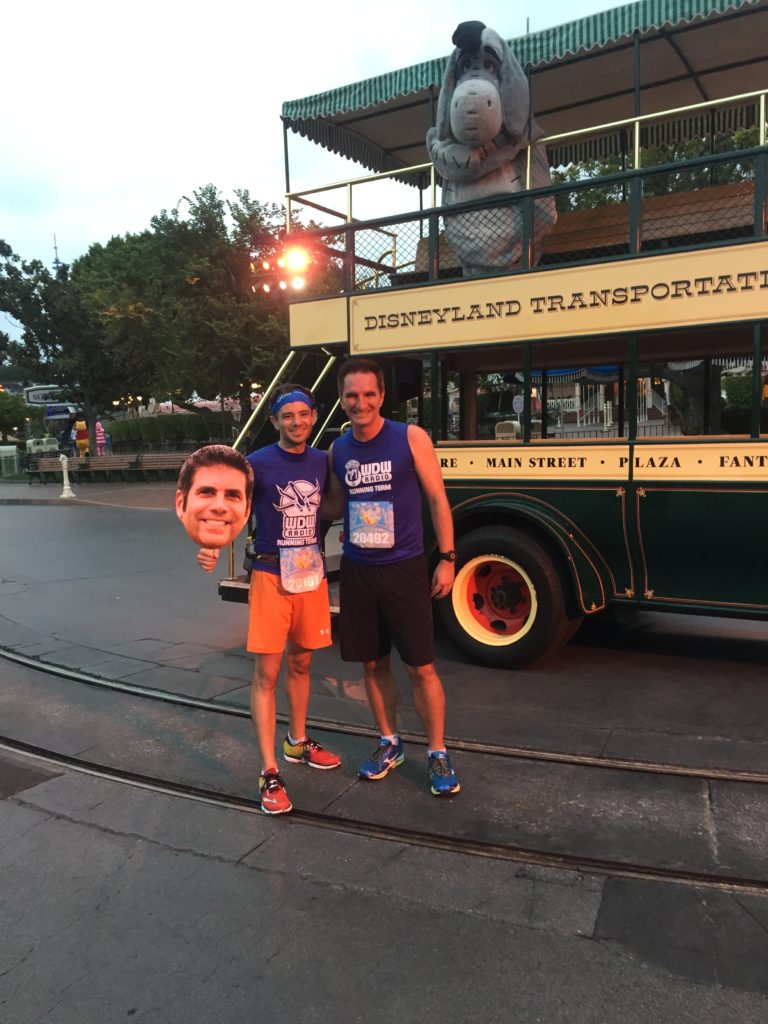 We then got a shot with the firetruck in front of Walt’s apartment. That was pretty fun! 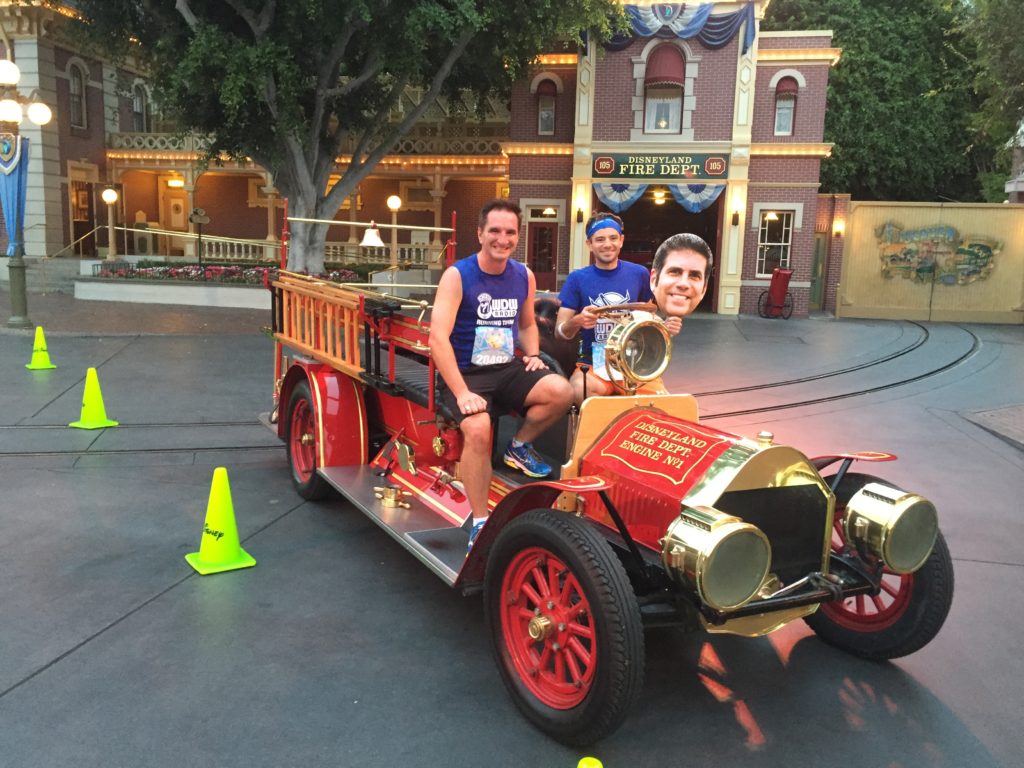 Now the final stretch was where the dynamic duo really got to shine. We both took a side of the street and yelled to the crowd, greeted them and got them going. I’m pretty sure there was a point where Luke was yelling at them and I was doing a weird version of the robot and break-dancing at the same time.  People loved us….. except for the people at Starbucks. Don’t greet people in line for coffee, they are not fully functional yet.

We got major shout outs from the announcers at the end and we made sure we finished in style. 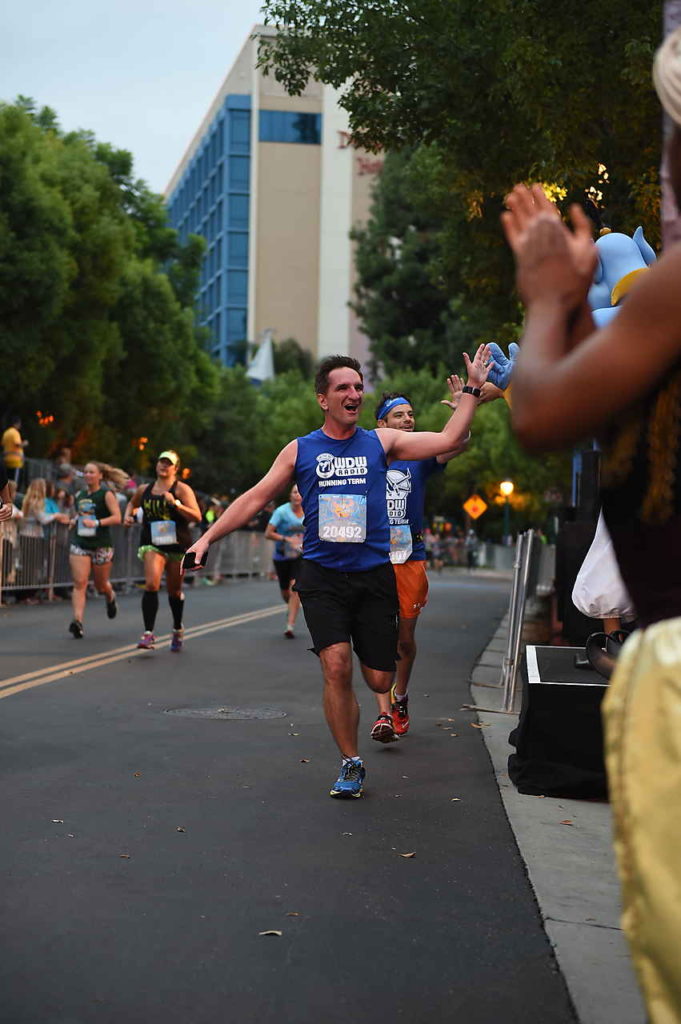 Of course, we had to stop by and see our favorite photographer! 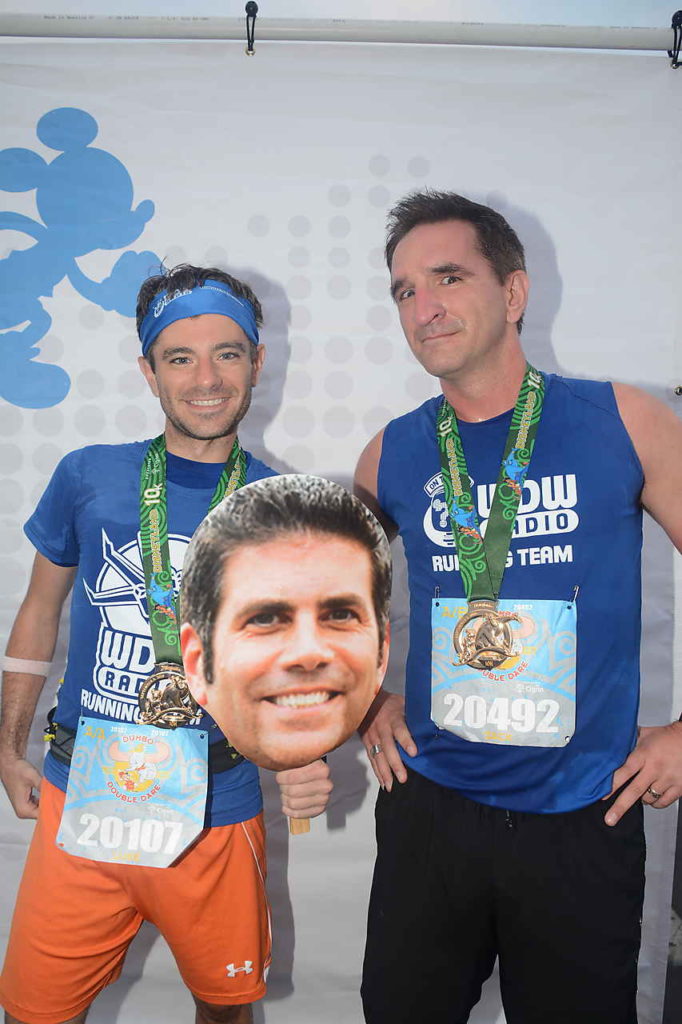 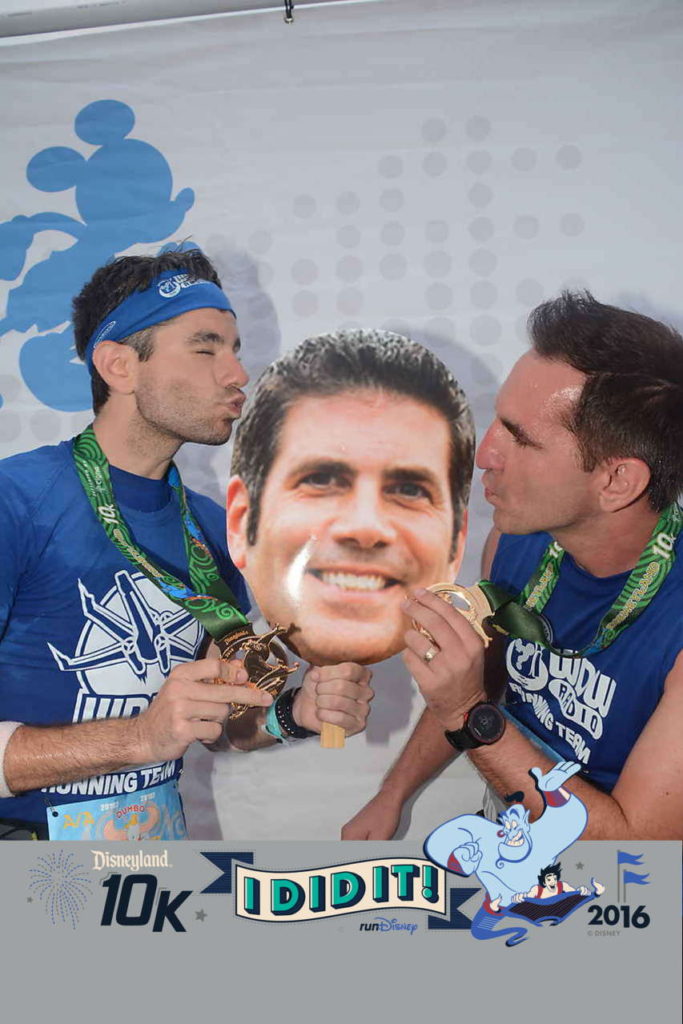 Two down and one to go!

NEXT UP: The Disneyland Half Marathon