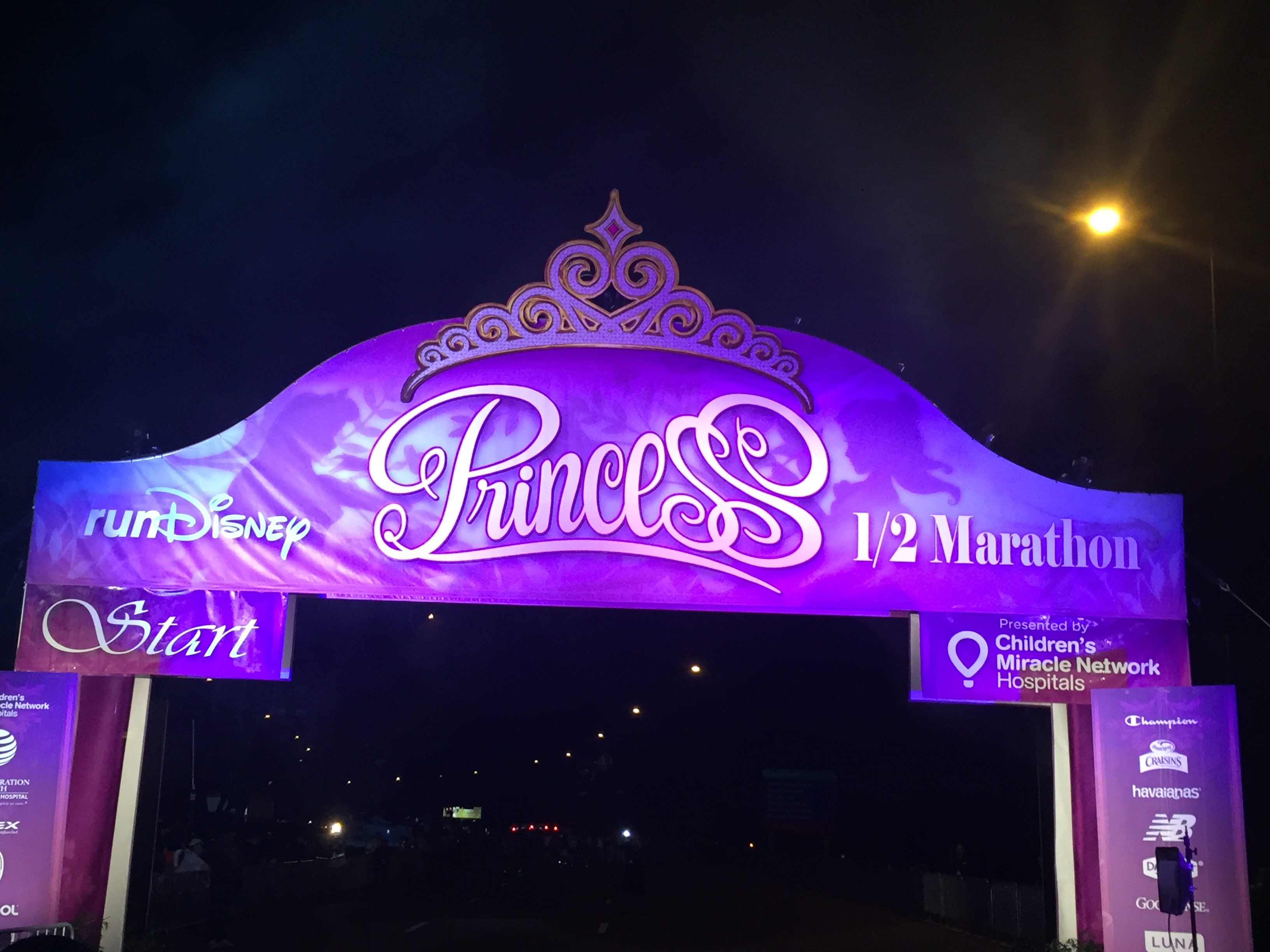 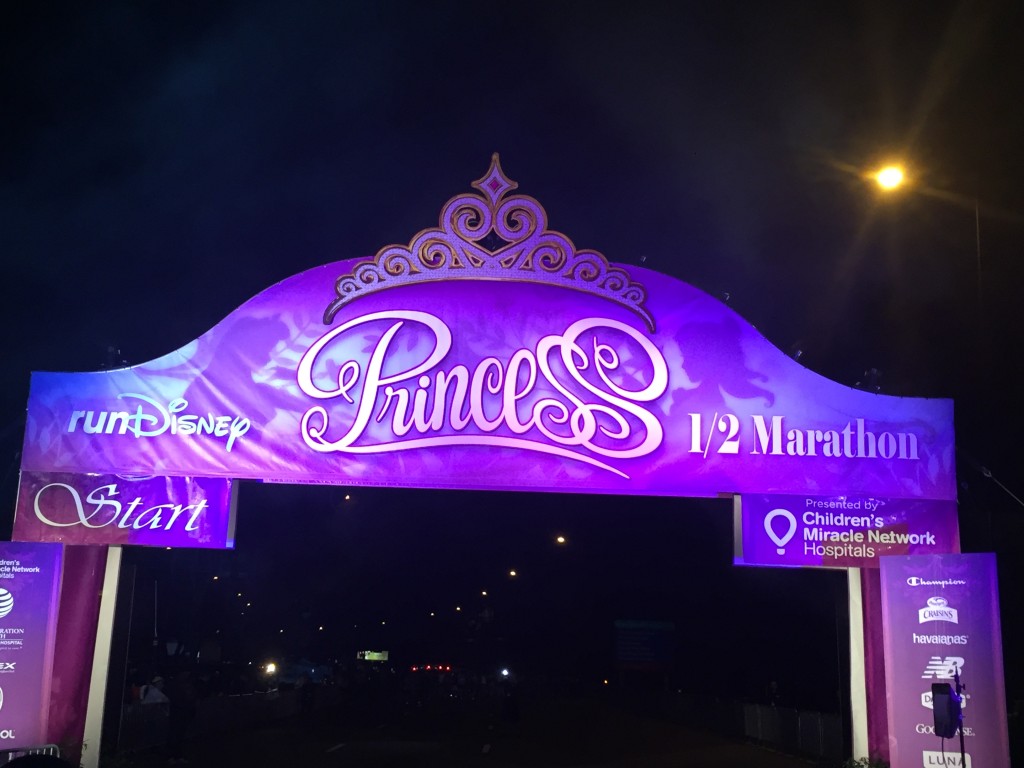 It’s day three and I’m actually feeling better than I did during this time at marathon weekend. It could be the weather that was much nicer this time, the fact that I had now done this course before or that my immune system wasn’t in the process of destroying itself. Either way, the race went quicker this time around.

There were more people from the team at this race; it usually builds up more every day of the series.  There were also more characters out that Sharon and Beth got to see after I took off. Beth gave them Valentines cards which they all enjoyed. 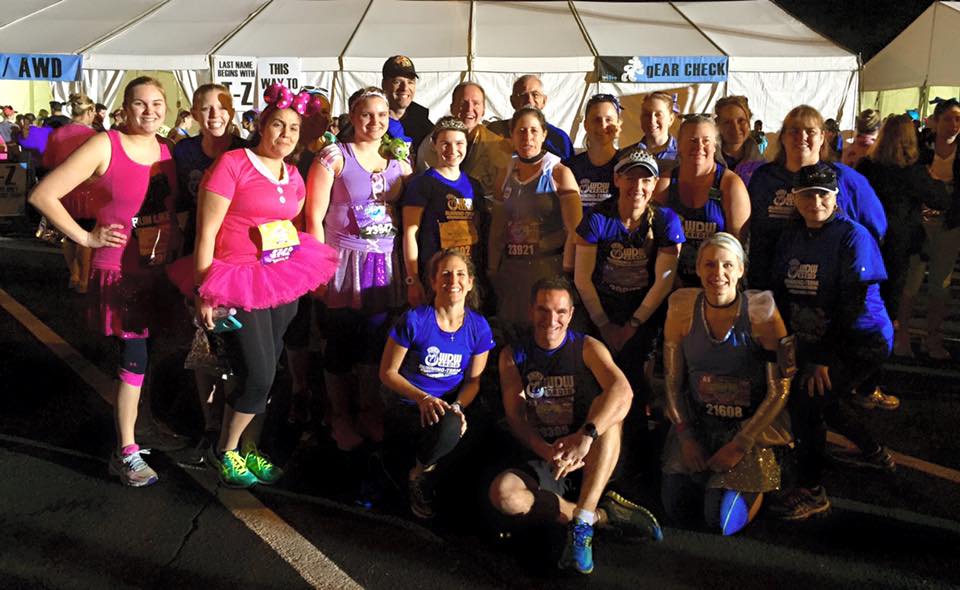 You already know how much the WDW Radio Running Team means to me and my love for them so I’ll move on….

I was in B corral (The first dudes allowed corral) so I knew I would likely not have too many long lines for the characters. It was a great start, nice and cool, and a solid two miles before the first characters…  boy was it a good stop! A bunch of the rare guy characters all together! 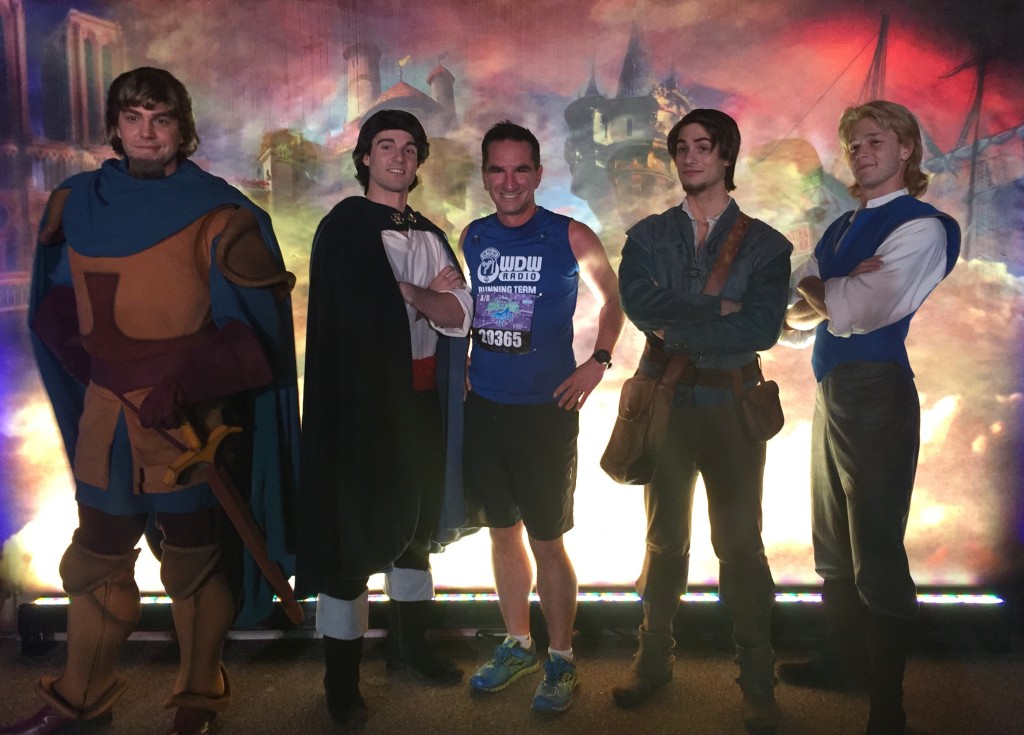 Getting some new characters that I’ve never seen 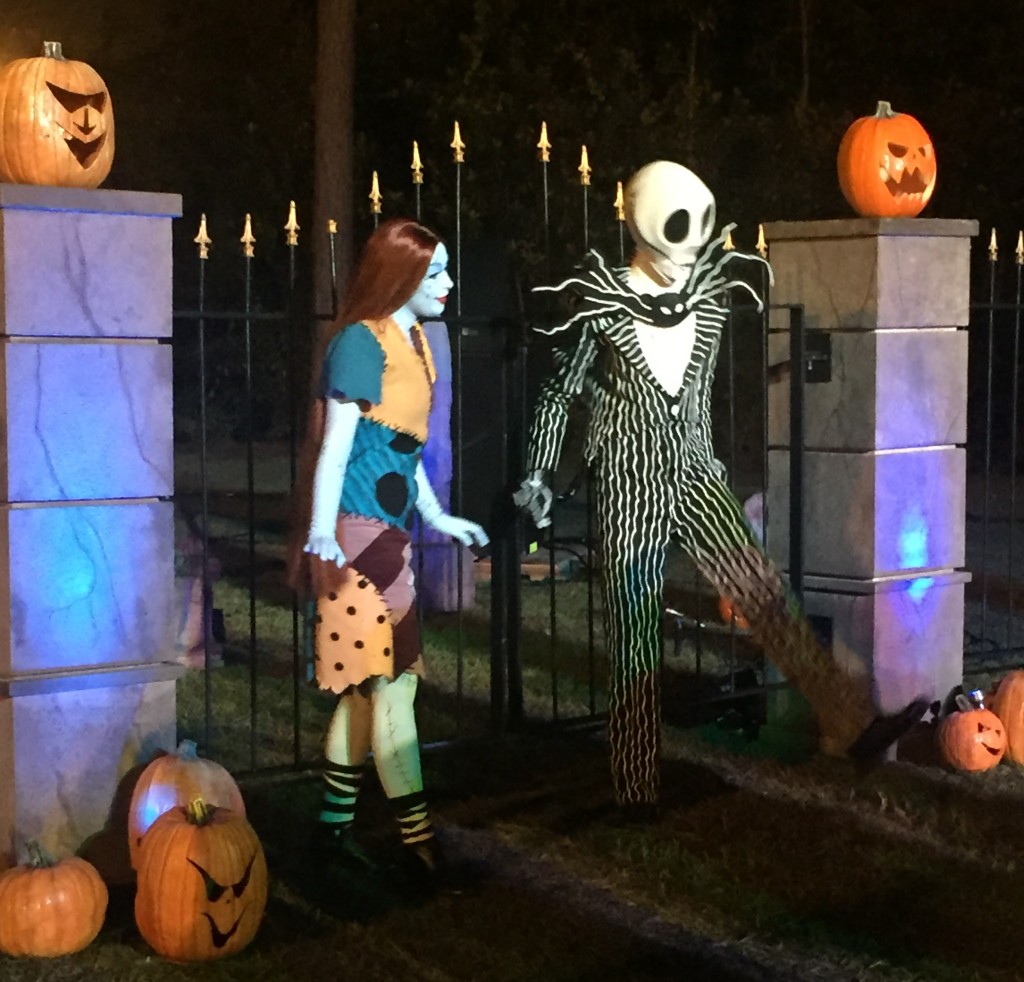 always gives me a boost in the race. This one was no different and I was zipping along on the way to the Magic Kingdom.  I didn’t stop at for Aladdin or Jack and Sally. It’s interesting because a year ago, I would have lost my mind seeing Jack….

The run through the TTC was interesting because it was dead compared to marathon weekend. There was a Japanese percussion group that was amazing though!  After that there is not much before you enter the Magic Kingdom.

I got a awesome surprise after entering the gates.  The team cheer squad had talked about just meeting towards the end to cheer us on, but here they were in the MK as well. It was great to see Angel and the crew when I wasn’t expecting it! Sharon and the kids were also right around the corner. The turn on to main street is one of my favorite moments on this course. If you don’t get the feels from the huge crowd cheering and the castle all lit up, then you are at the wrong race. 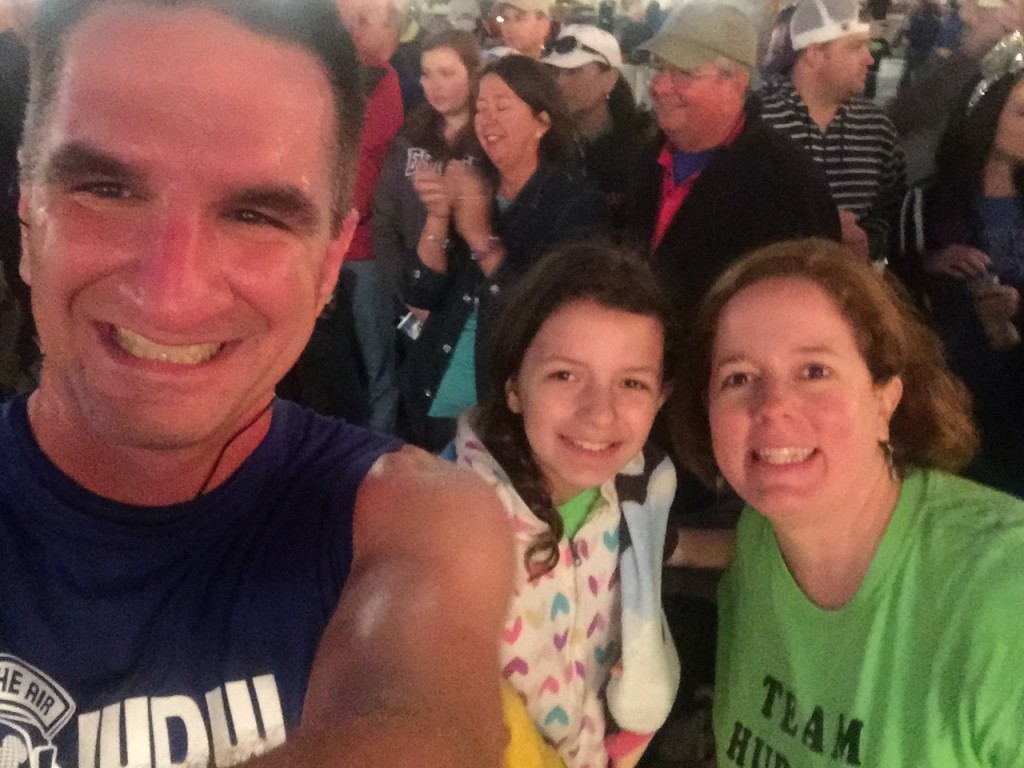 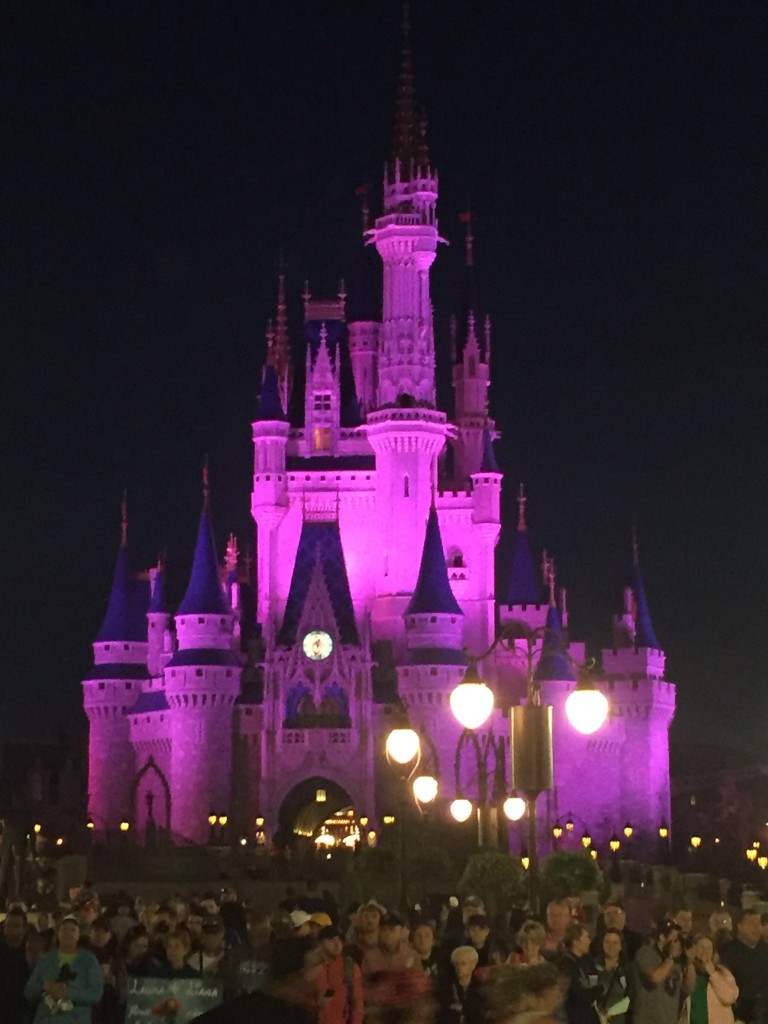 Disney makes up for the distance between characters in this park. They are everywhere as soon as you get out of the viewing areas. I passed Buzz Lightyear, Queen of Hearts, White Rabbit, Woody and Jessie. I did stop for the Tremaine’s. They were in their winter outfits and they were retiring the step-mother from the park the next day, so she was about to become a rare character. They are always super fun to see. 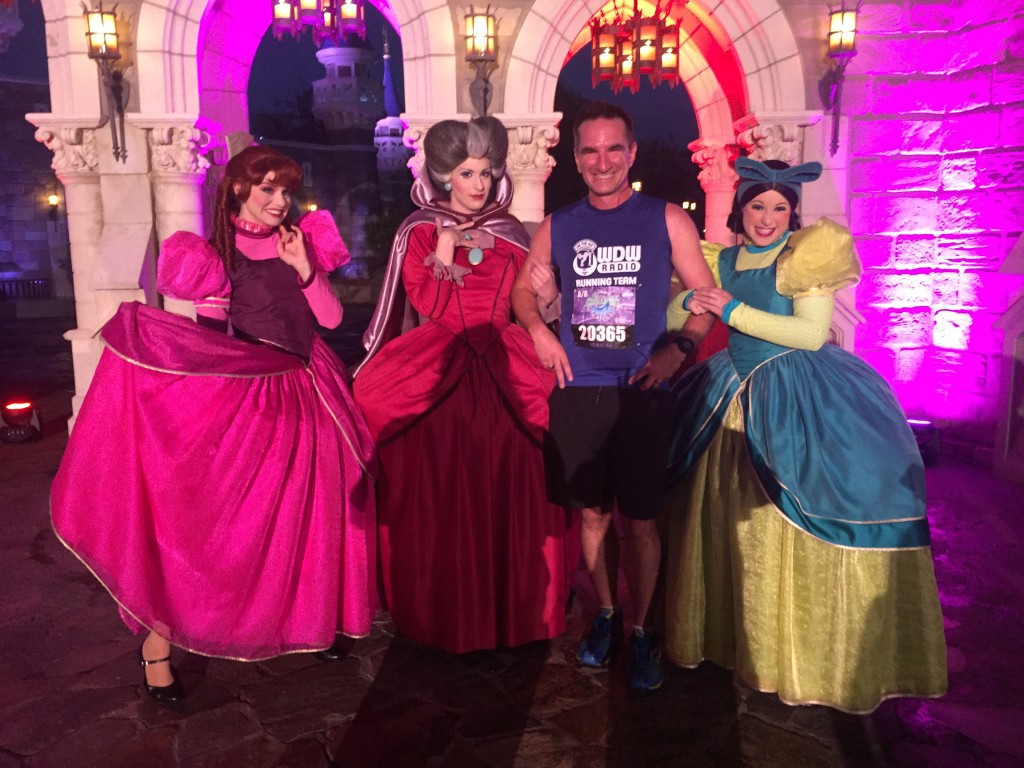 I interacted with the Frozen characters as the were on the backside of the castle. (You cant meet them during the race)

Ana: Why yes, that is his name!

Ive heard of the big bottleneck through through the castle but there were no issues at this point. 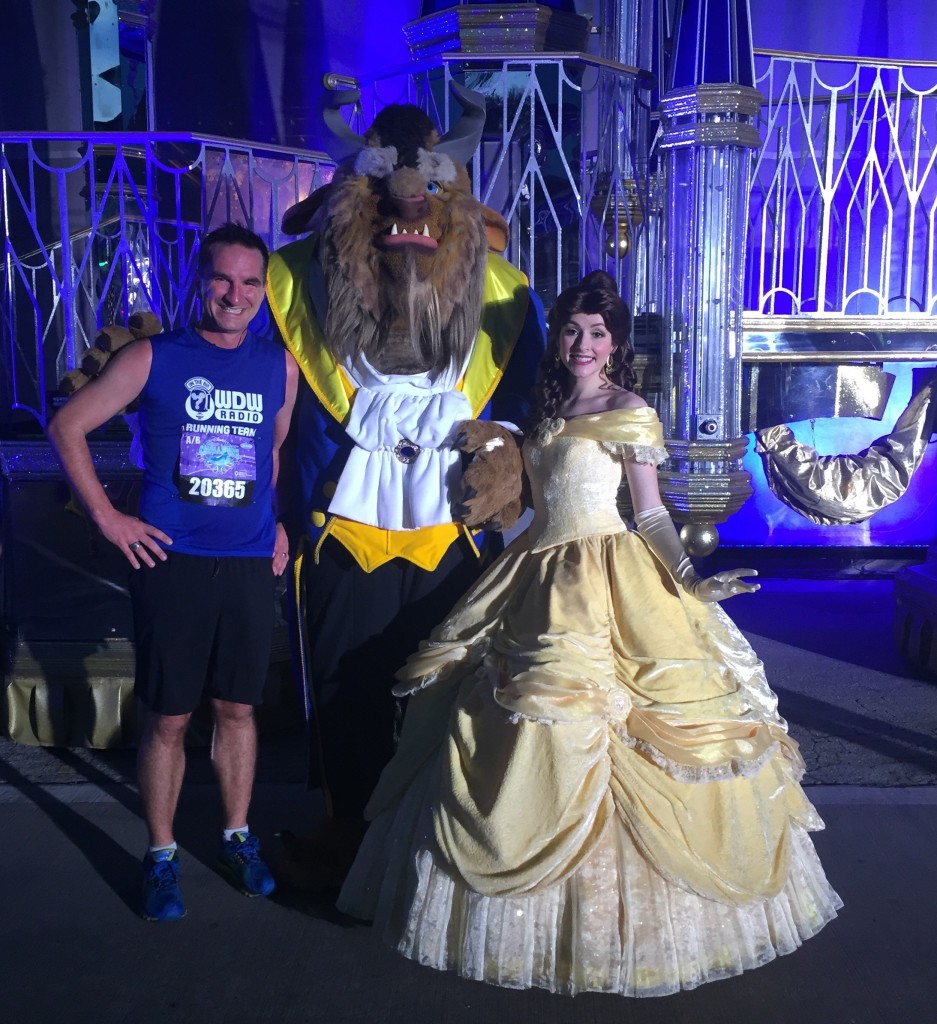 This spot is at the bottom of a little curve in a hill, you cant see it until you get close and so far it’s always been a fun surprise. They had one of the floats out with Belle and Aurora out this time. Beast in formal wear is hard to get and the only way you have a shot at him now is when you get a reservation at Be Our Guest. The lighting is not the best, so we have yet to get a good picture with before this race.  Mission accomplished this time! 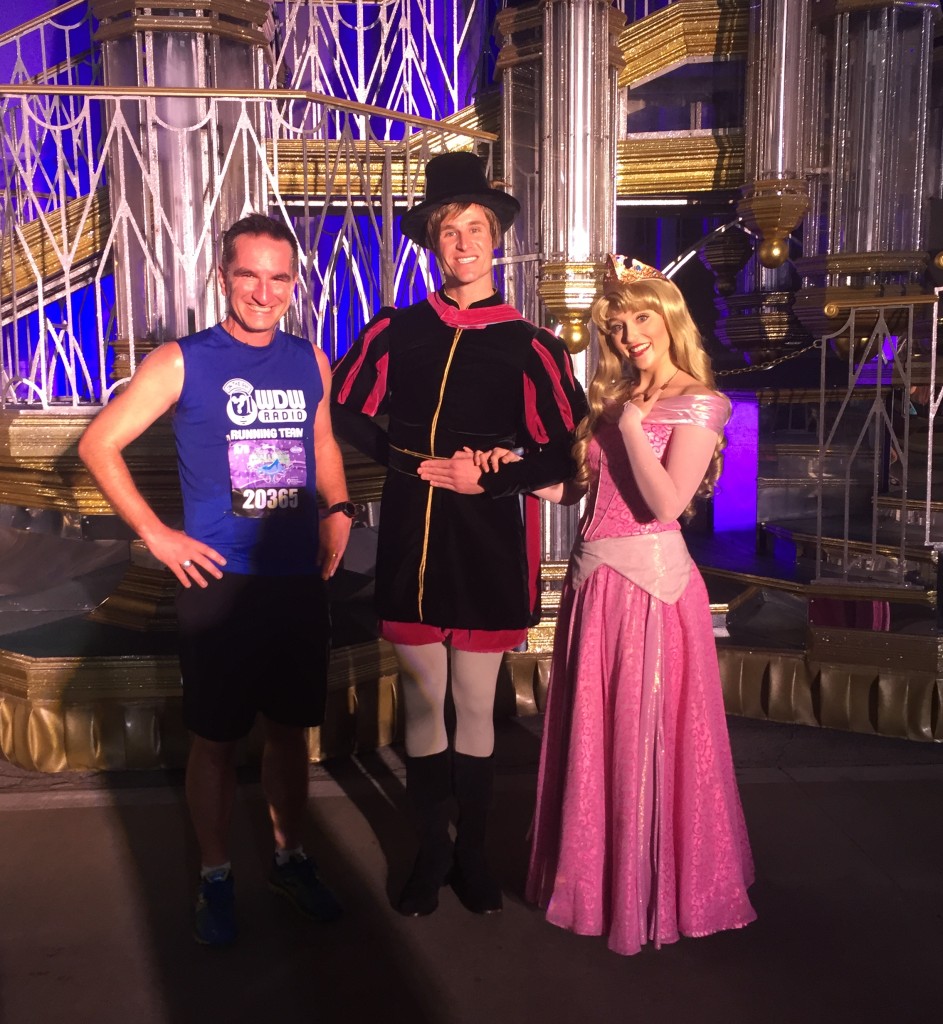 I started to break down the course in my mind at this point, because I was right at the half way point and was getting a bit tired. You go for a good stretch in the back with nothing but a dj so it can be a tougher spot on the course. I made it to the resorts area right as the sun was coming up. I saw Bert and his penguins but didn’t stop.

There had been a lot of stories about the next stop. Originally it was a bunch of guys with the glass slipper. They would sing and people would even propose at this stop of the race. They were now a full wedding party and it was fun crashing the reception! They were hilarious and said that they had been waiting on me to broadcast the wedding on WDW radio. This was definitely one of the favorite stops in the race. Worth the 8 miles to see them. 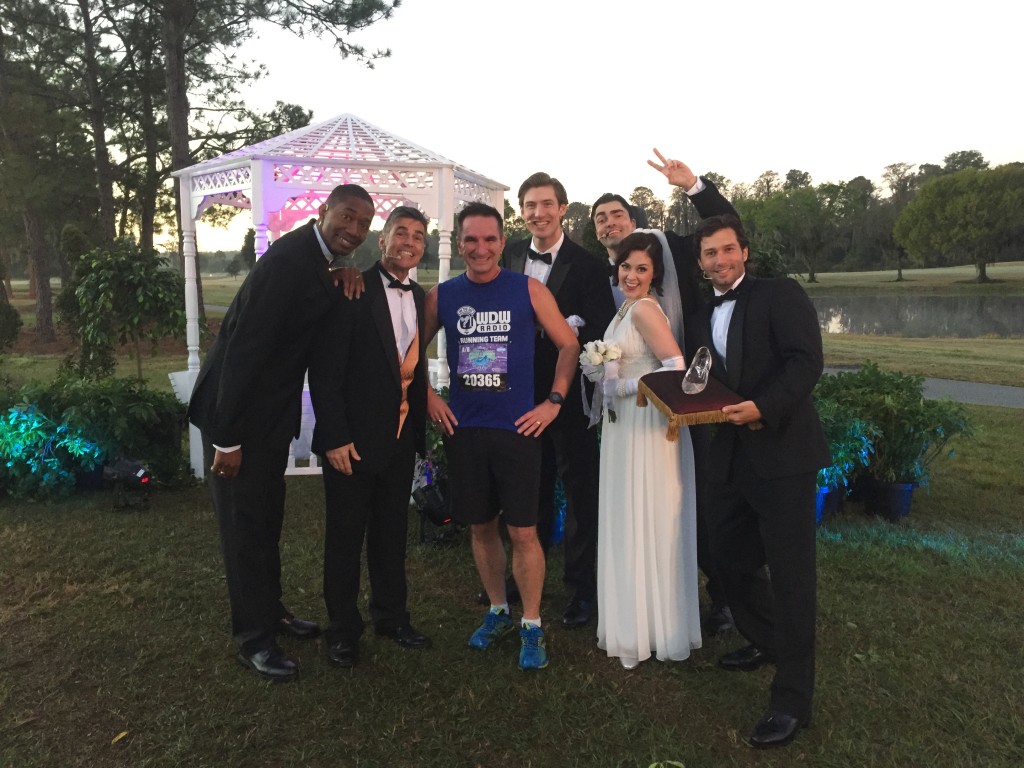 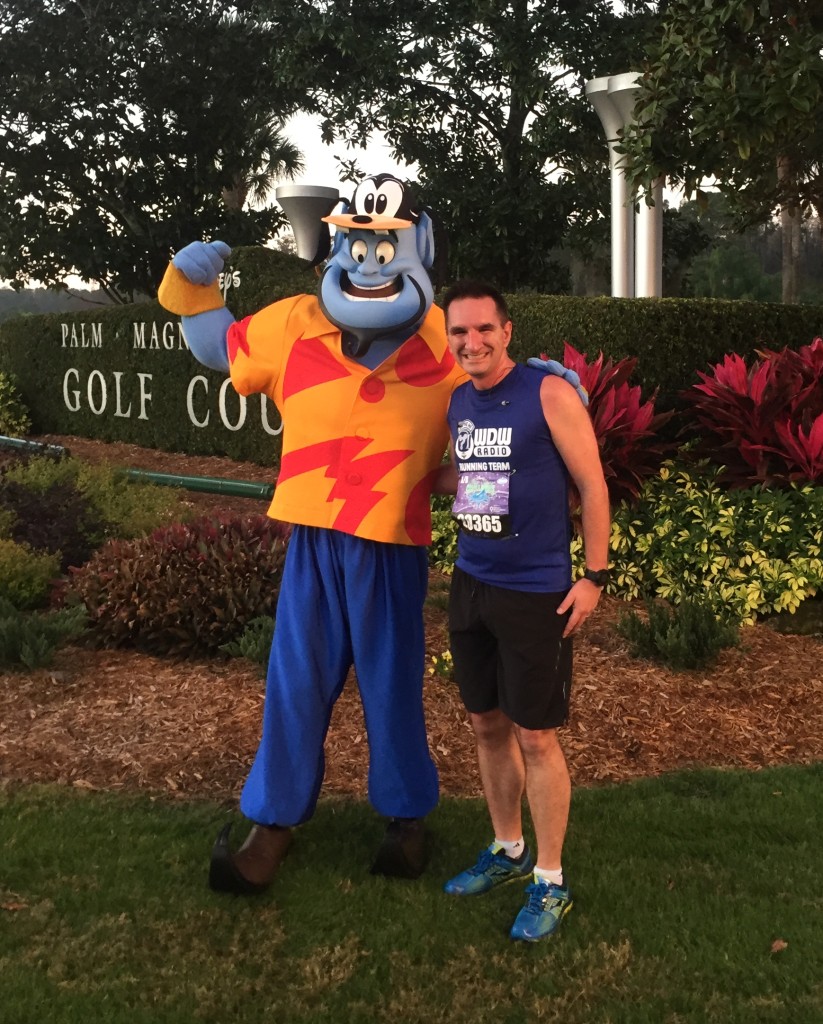 I had gotten a picture with the vacation Genie during marathon weekend, but there were no lines at characters from here on out so I stopped in hopes of getting a better one.  I also had a chance to get a better picture of the Mickey golf cart that they had out.

There wasn’t a whole bunch going on character-wise for a while after this. They had Mrs Incredible out with no wait at about mile 9.5.

It was amazing to see the crowd of people running in towards the Magic Kingdom. I was also able to see the infamous balloon people that carried up the end of the race. I thought that they picked up people, but there were several racers still trucking along behind them. 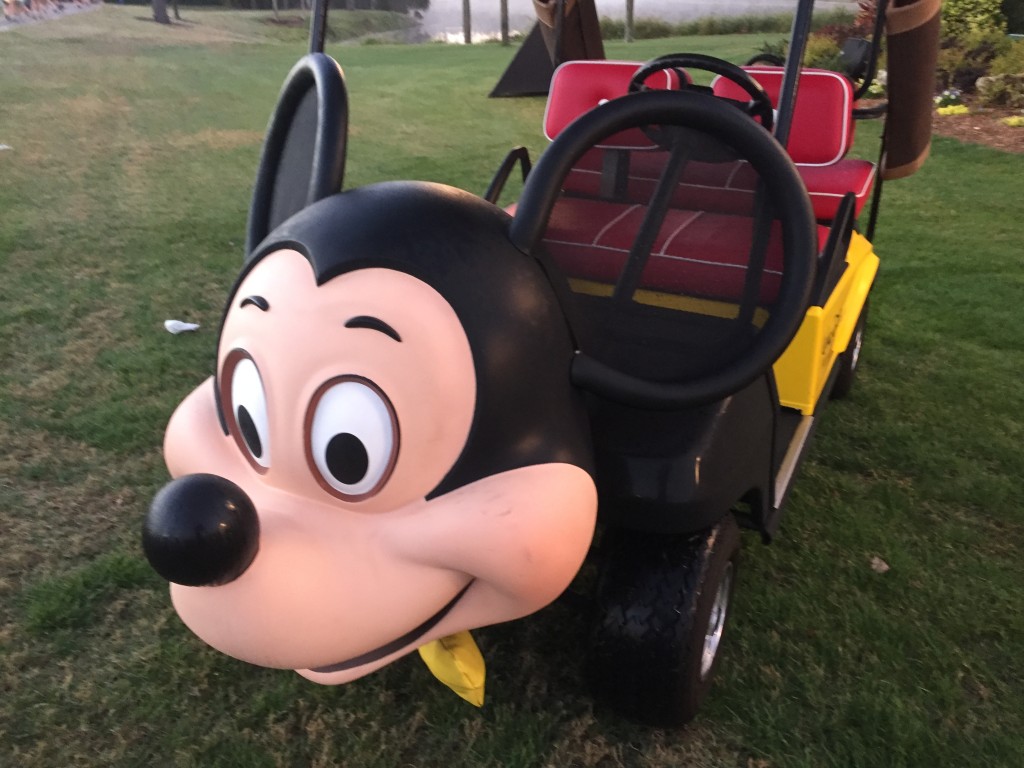 The Green Army Men were again out on the big curved hill and I was able to snag a picture with some of the regular ones.  You can see the leader yelling at runners behind me! It was then off for the final push. It’s definitely the hilliest portion of the course. (You go over three overpasses) 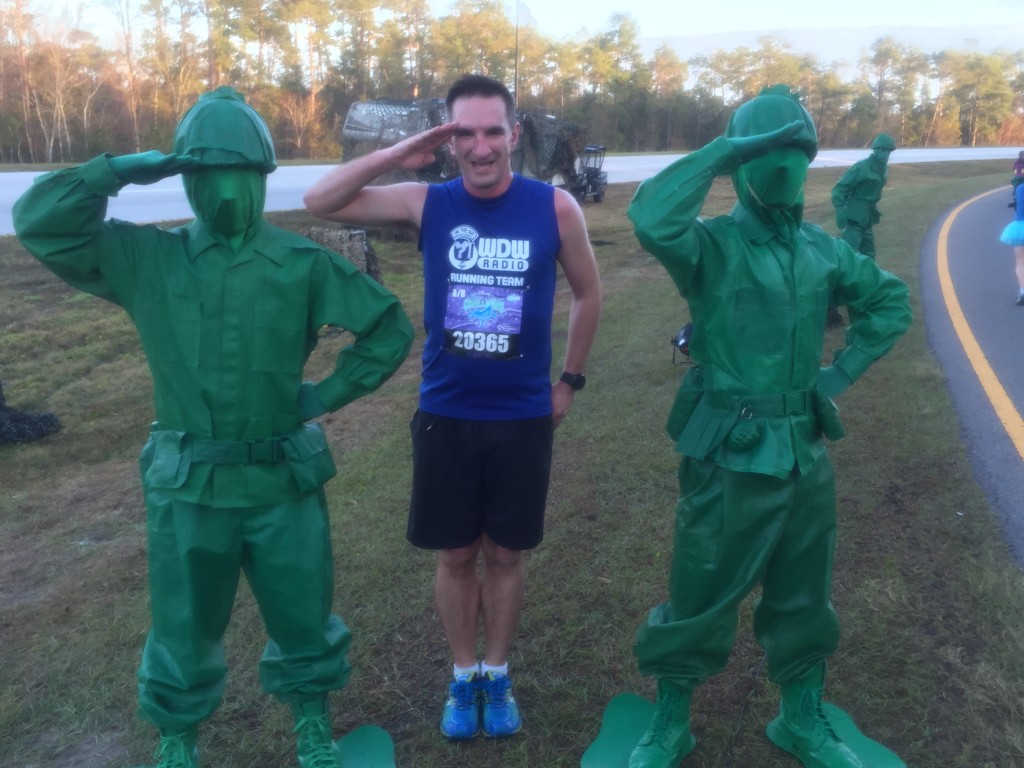 Our running team cheer squad was after the last overpass in the perfect spot to encourage us for the final mile. I rolled an ankle at some point, but was pushing through it to make some decent time. Deanna and Lou didn’t even realize how much just a quick note of encouragement helped me get my mind right. 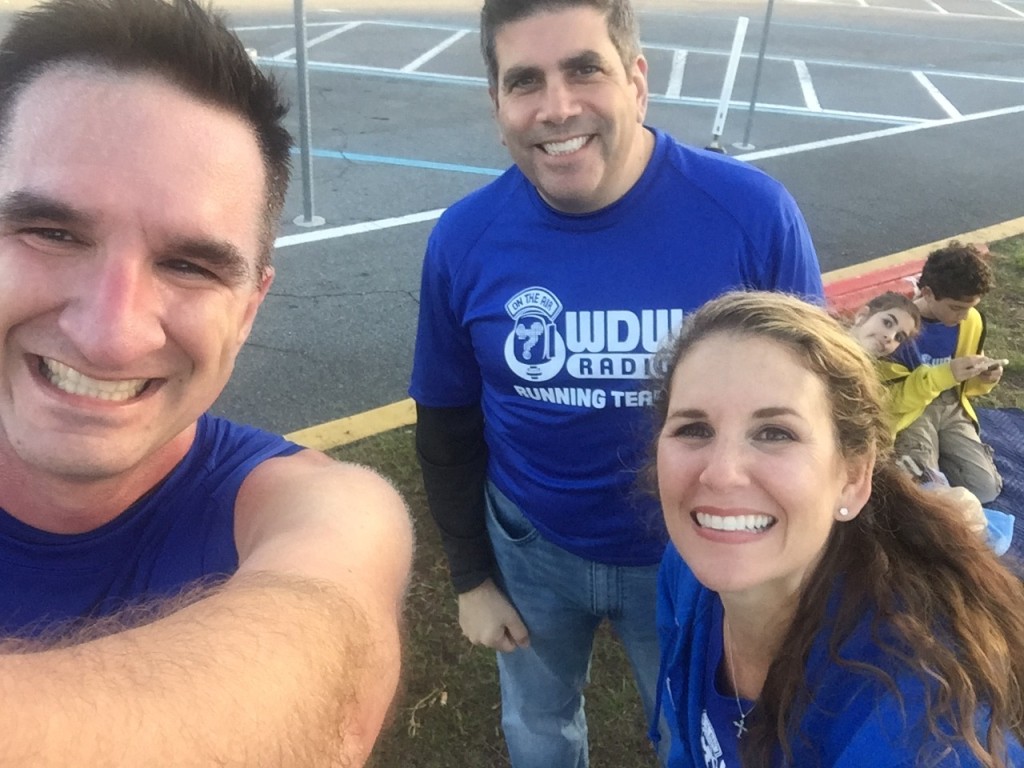 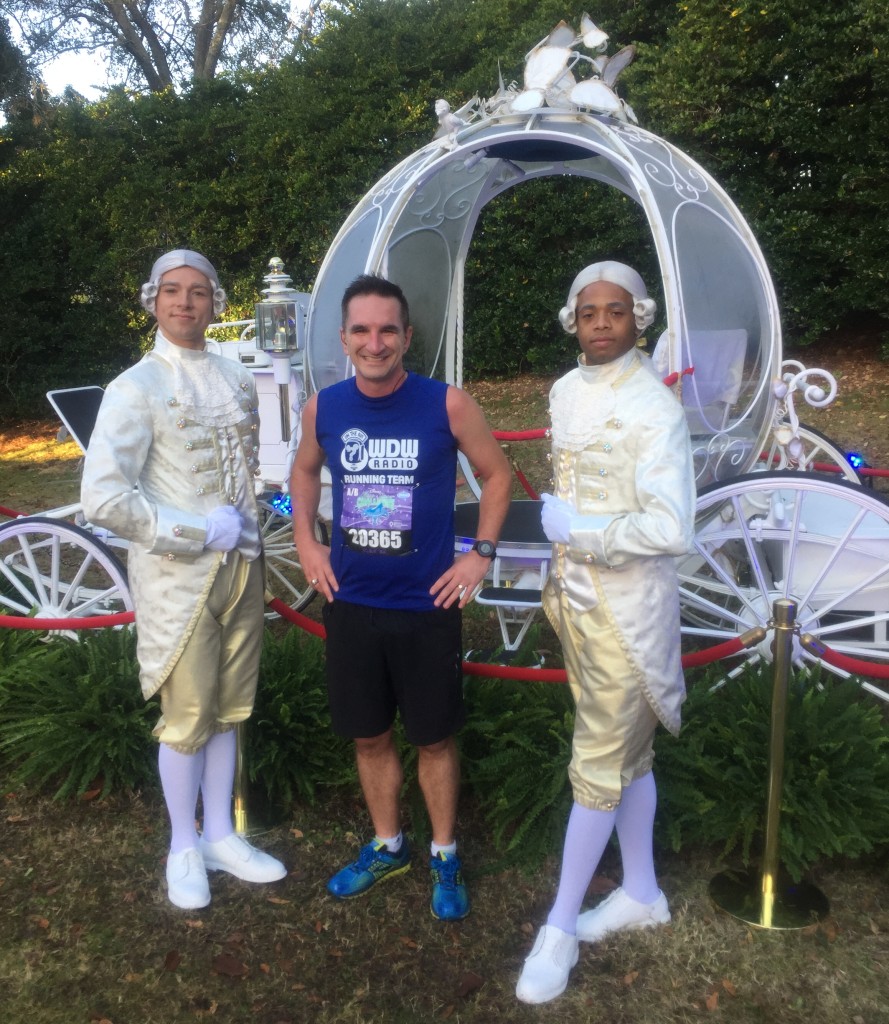 Around the bend was the coachmen from the Expo, except this time they had the actual coach with them. I didn’t get a picture with them the other day so I stopped to get a quick one with them.

There was not much going inside Epcot at this point. It had not opened yet, and there really weren’t any characters in there. The famous gold choir was there though. It’s a gospel choir that sings at the 13 mile mark. I forgot to get a picture of them at the last series but made sure to get one this time. It’s a good finale right before the turn in to the finish line. 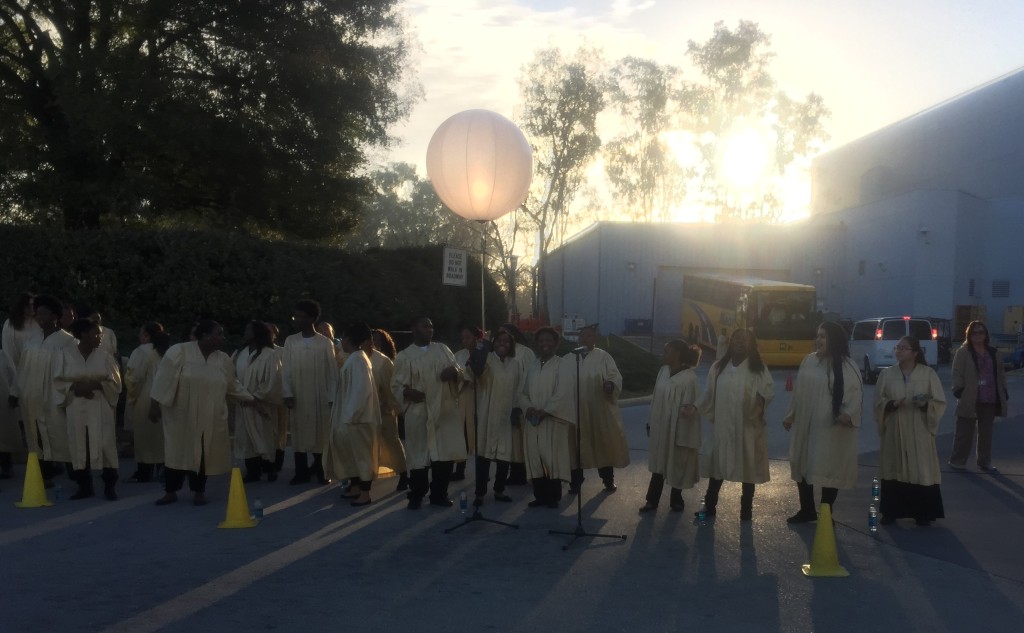 Right as the sun was coming up nicely…

I was pretty happy on how I finished and went and got a massage right after the race. Overall, it was a great race and I was able to pick up several new characters over the weekend. It’s a definitely a race that has it’s own flavor! 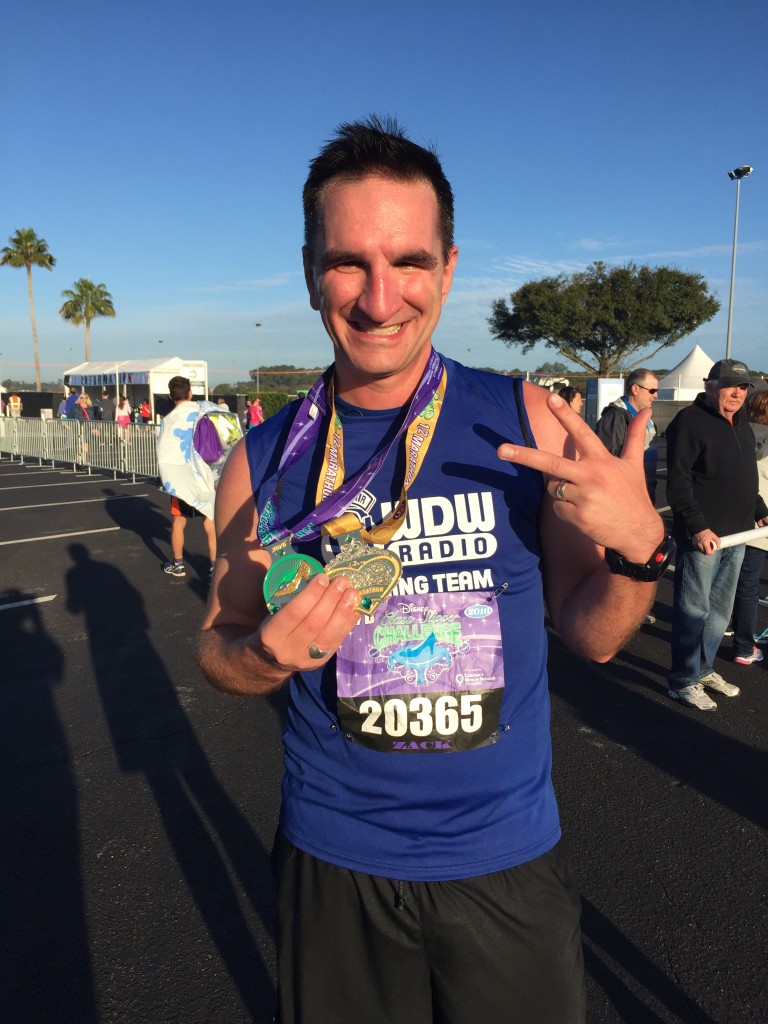 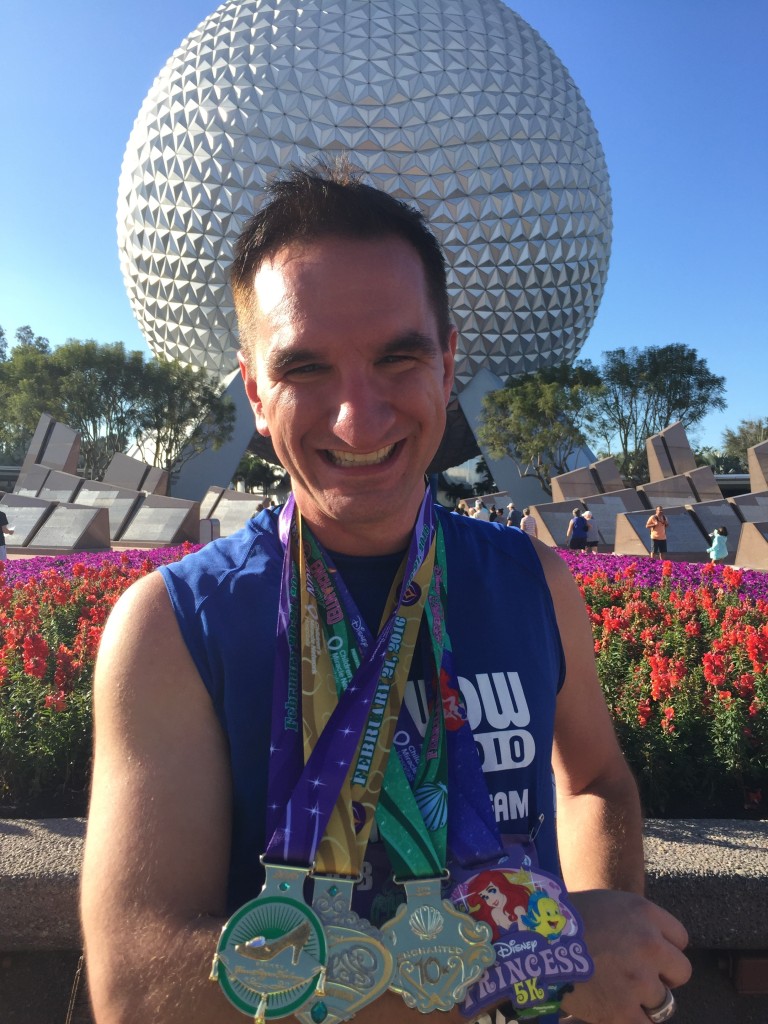 Next up: Star Wars (The Dark Side) Series in April!