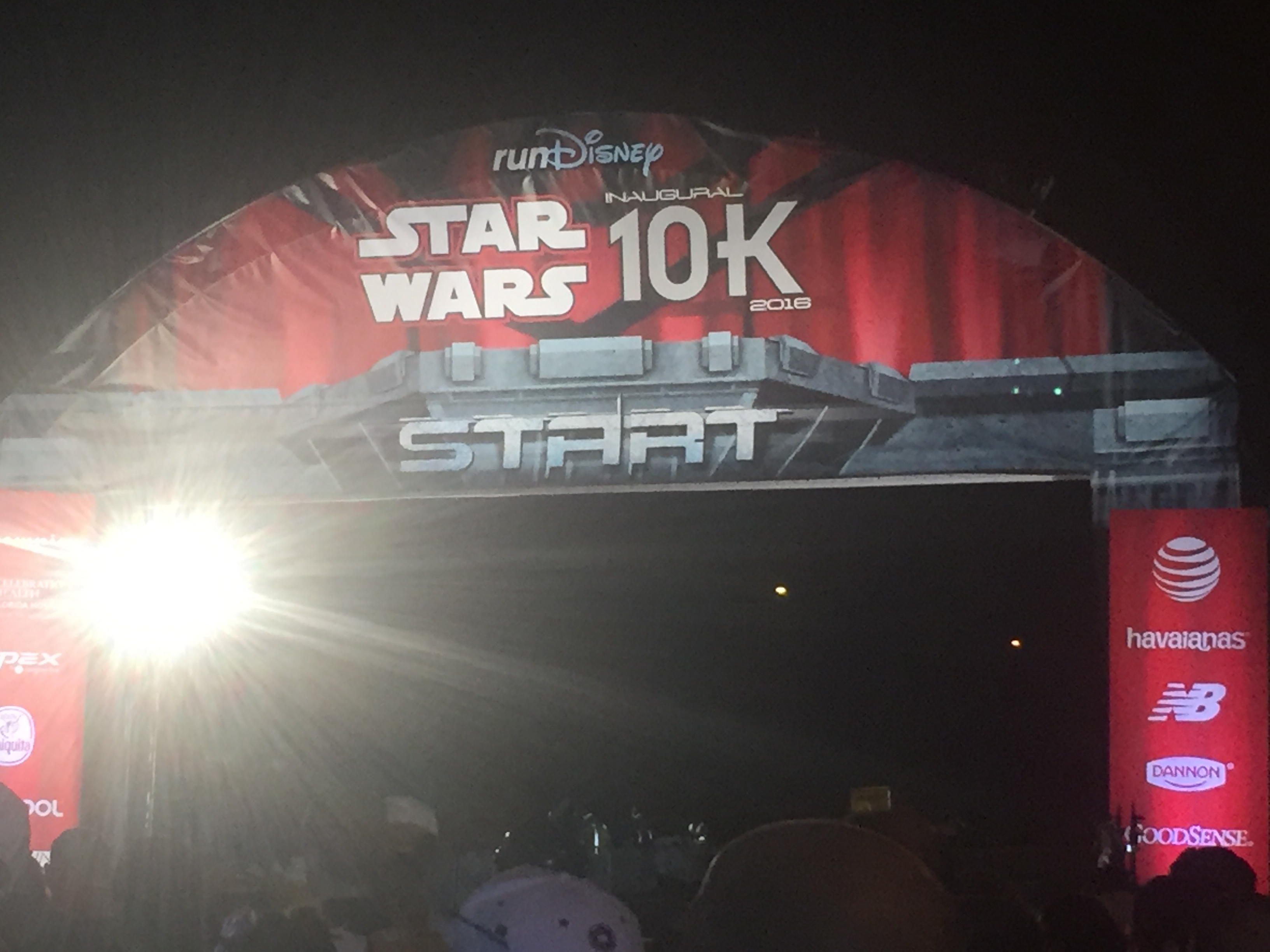 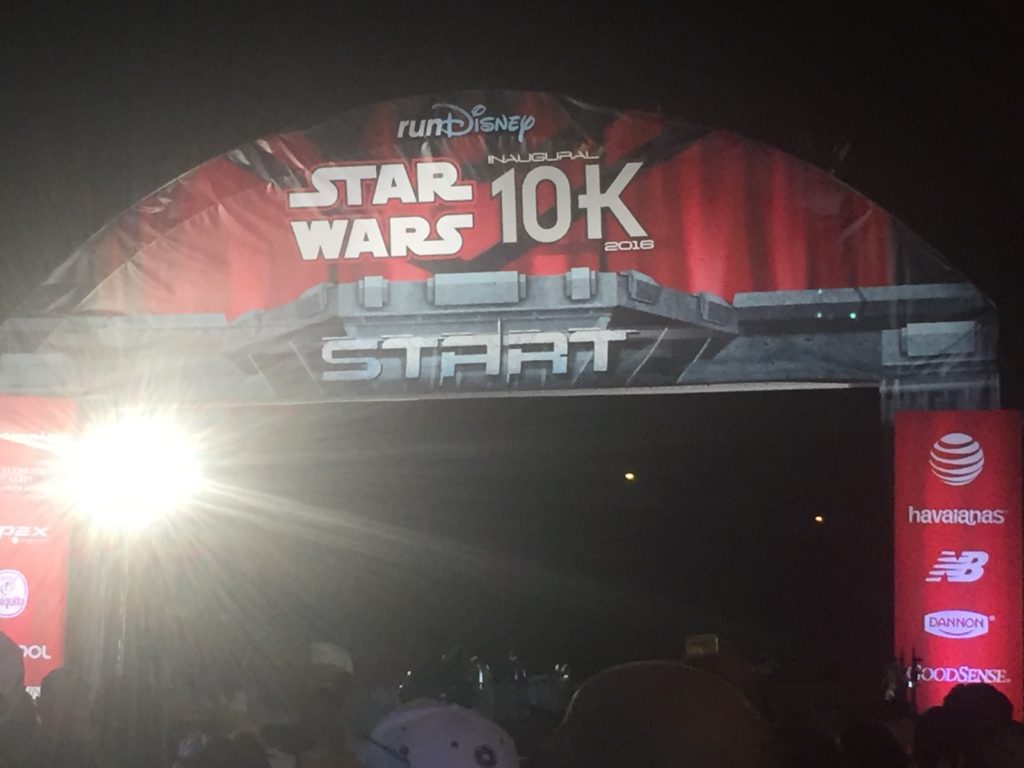 Yesterday was a great fun race. I had a hunch that today would be exactly like yesterday character-wise. The backdrops were too elaborate to swap out after just one race. I did have hopes though that I was going to be wrong and just maybe see a ton of characters at Hollywood Studios today. It is the current Star Wars home right now after all.

We spent the whole time before the race with the team. It was great to see folks that were in for the darkside challenge and we had a ton of new people with us this series. 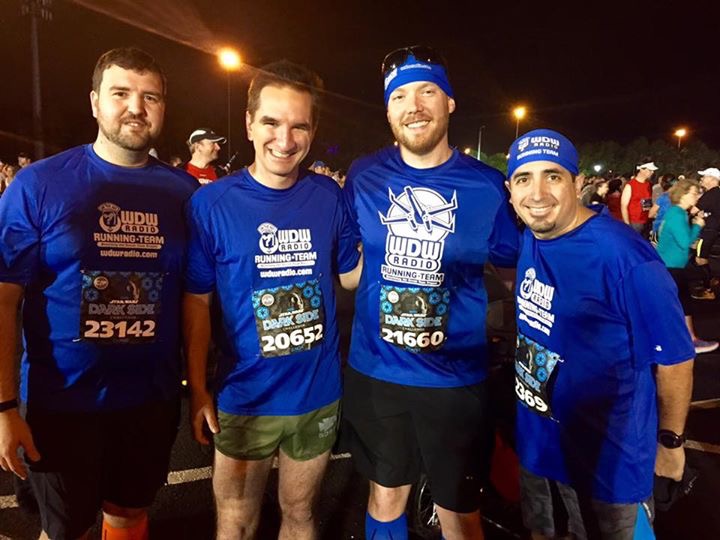 The route for this race was pretty much the reverse of the washed out Wine and Dine half from Nov. Wine and Dine Half Marathon 2015 Recap . We took our team picture (Big group!) and headed out to the corrals.  This wasn’t the normal way we go to the start line and everything was jammed up big time. I bet that Disney will get this one right next time they run the course this way.

As expected, there was R2 again and Chewbacca on either side of Epcot. It was interesting that they kept the pink lighting up from the recent Princess races in the park. There were no characters on the boardwalk, but our team cheer squad was there. I’m always so happy to see them and very appreciative that they show up to cheer our team on. 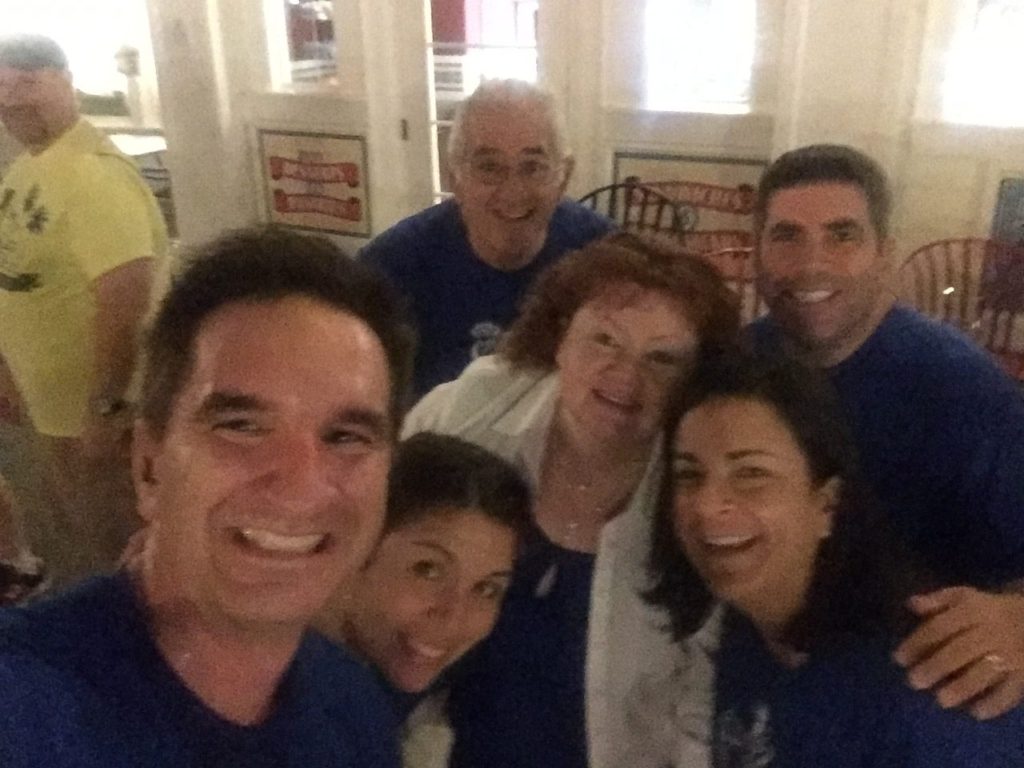 I know assume that Angelo (in the back) is part ninja. He was there at the starting area and somehow beat me to the boardwalk! I’m pretty sure the tunnels don’t go that far.

As you entered the Hollywood studio there were a ton of the 501st Star Wars group out which was awesome! They were all lined up and giving out high fives and taking pictures. We turned the corner in to the park and found a bunch of photographers everywhere but no characters. 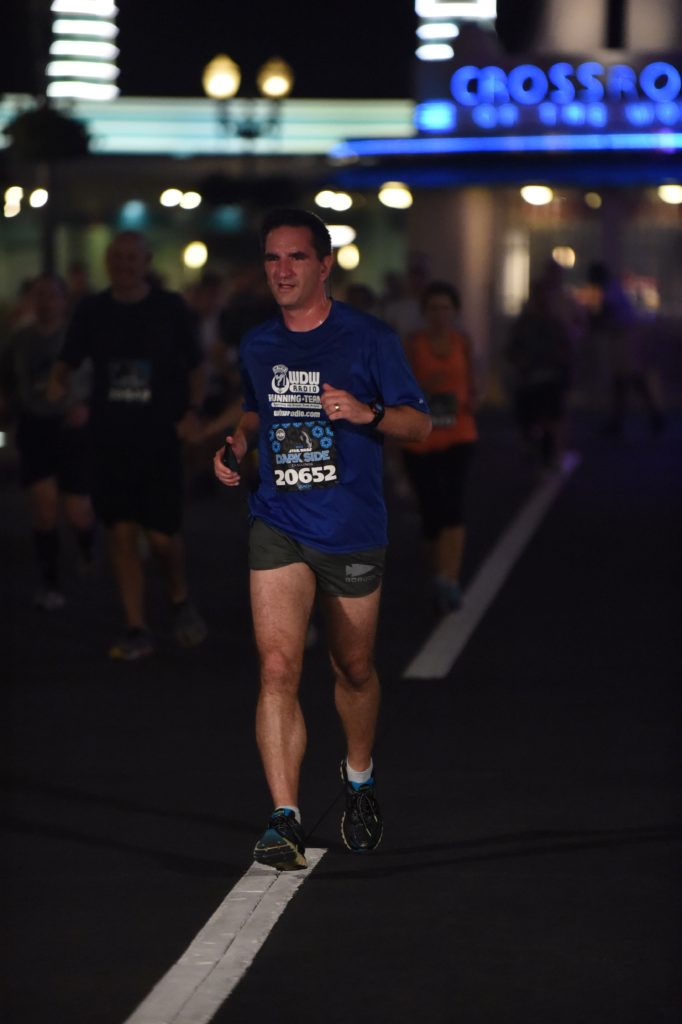 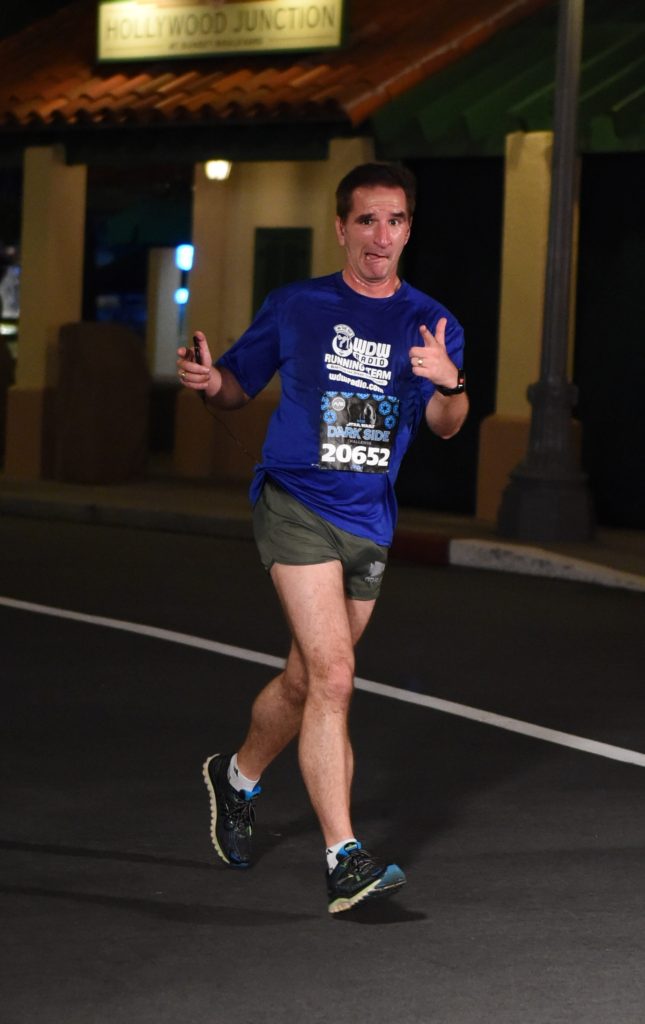 …and sometimes you dont.

There were more of the 501st in the back but no official characters in the park at all. They did have the Emperor’s chair that you could get a picture in. Half way through the race, this was my first stop.  It’s difficult to look hardcore and evil when you have sweaty legs….. 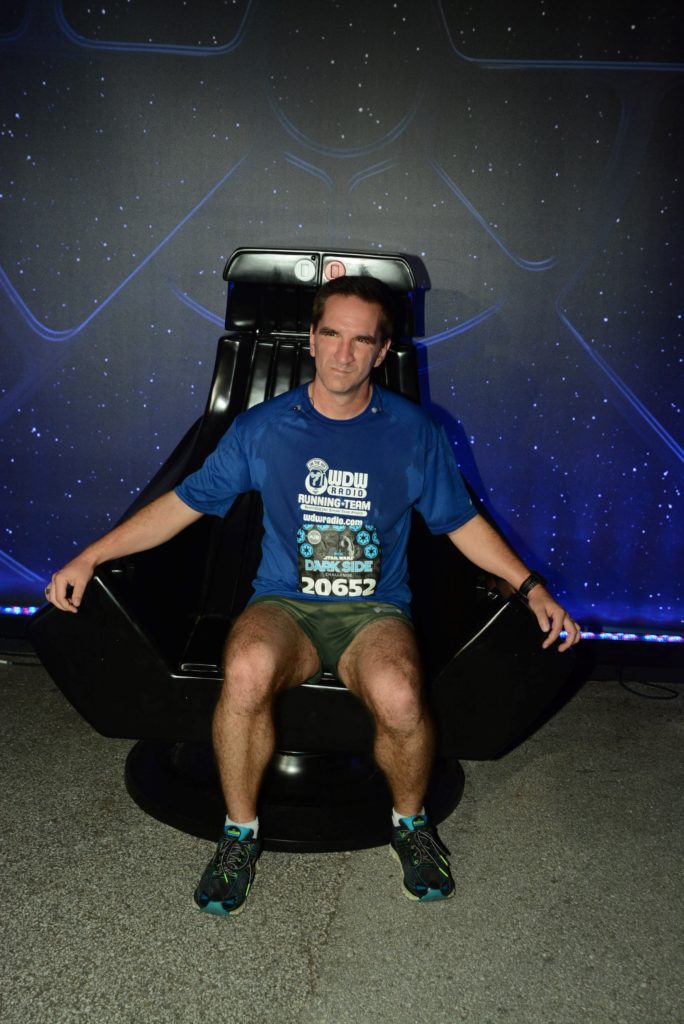 I promise I didn’t pee my pants. Its hot out there!

The race then headed out to ESPN and took a back road to get there. The dirt road was brightly lit and I thought it was funny that they had an automated message about the transition cranked on the loud speakers. Of course that meant that 2 seconds after transitioning, I rolled an ankle. It was still dark out and the trail was not lit too well once you got in to the woods.

Once in ESPN the crowds started to form all along different parts of the course. The last group of the 501st were here and I finally remembered to catch a picture of them as I was running. 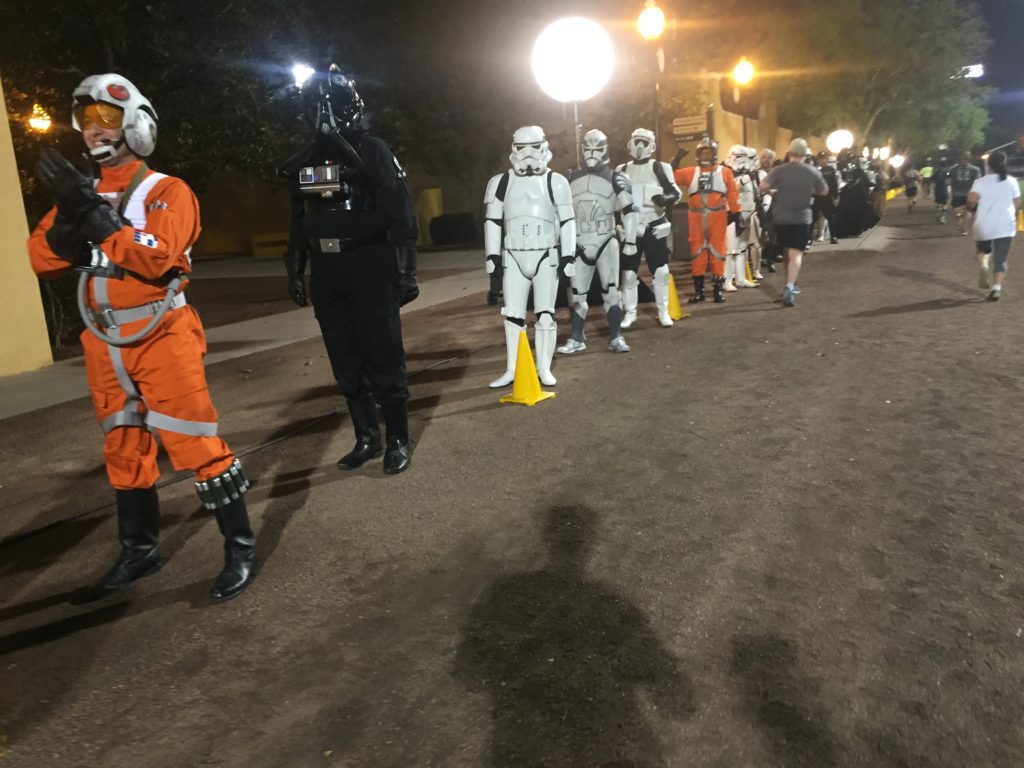 Around the corner and then it was finish-line time! 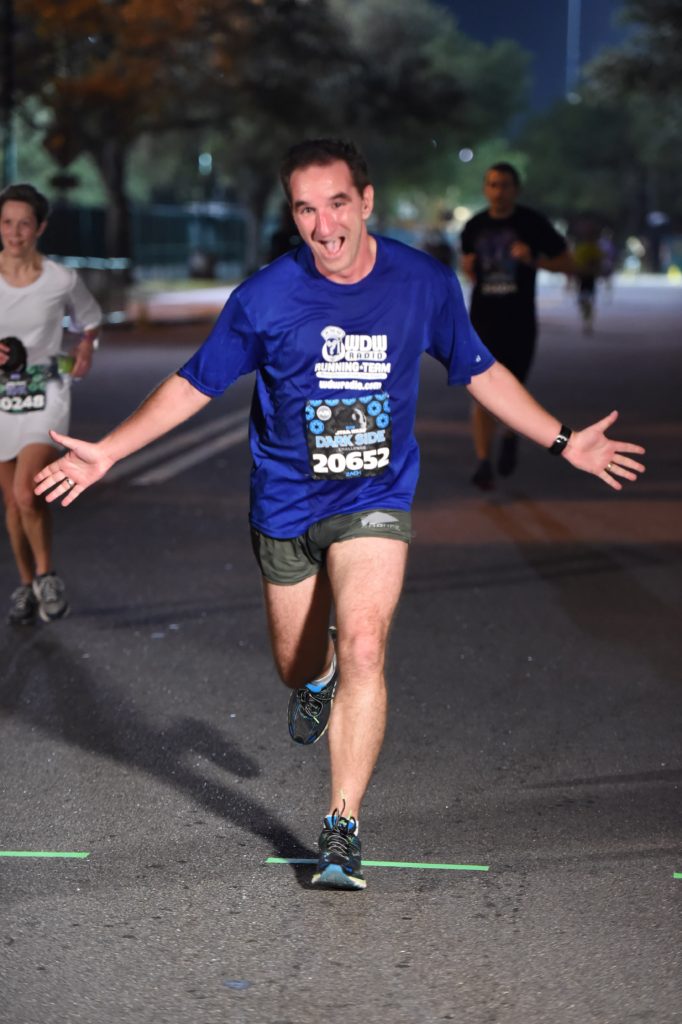 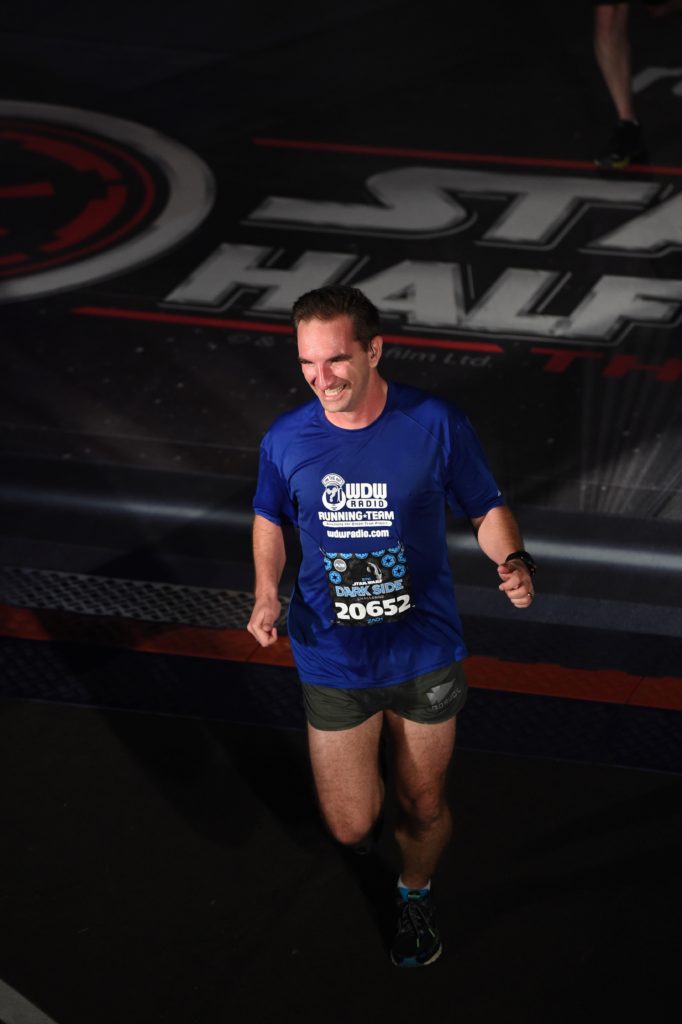 It was a good race, but more of a regular race than a Disney race in my opinion. At this point I knew without a doubt that they were intentionally leaving characters out of the parks. If Disney was going to change their strategy, then I would as well. Tomorrow I’m trading in running solo for running with my team. 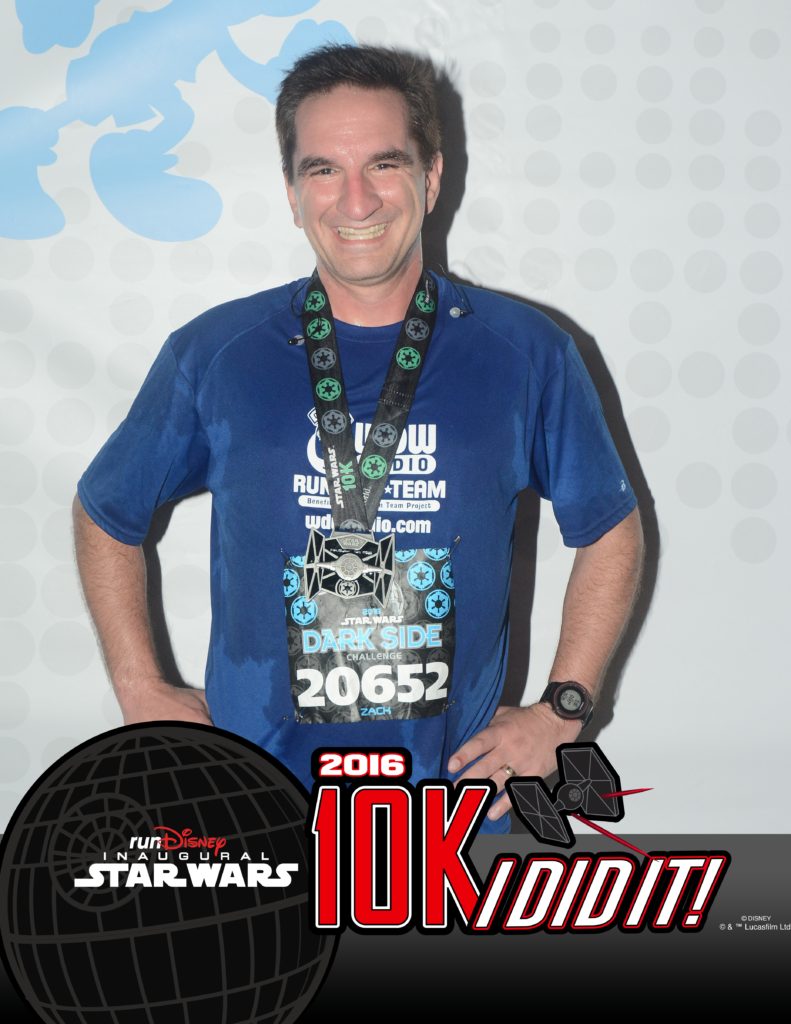 By the way, it’s also Flower and Garden time at Epcot! Definitely one of favorite times of the year for that particular park. 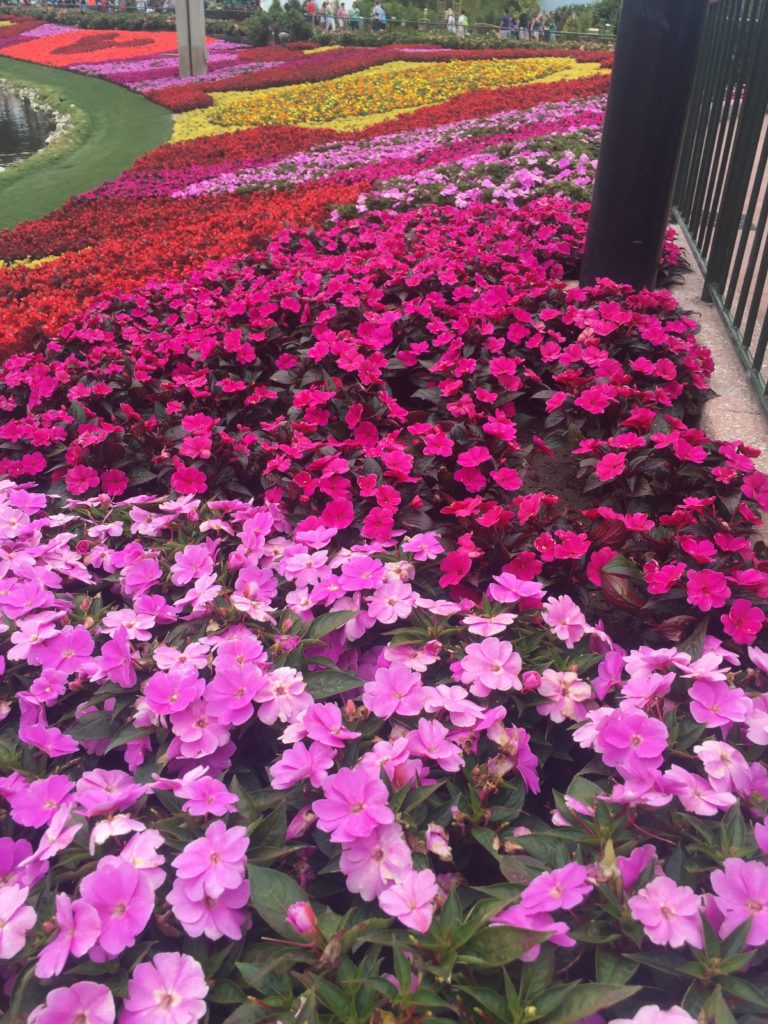 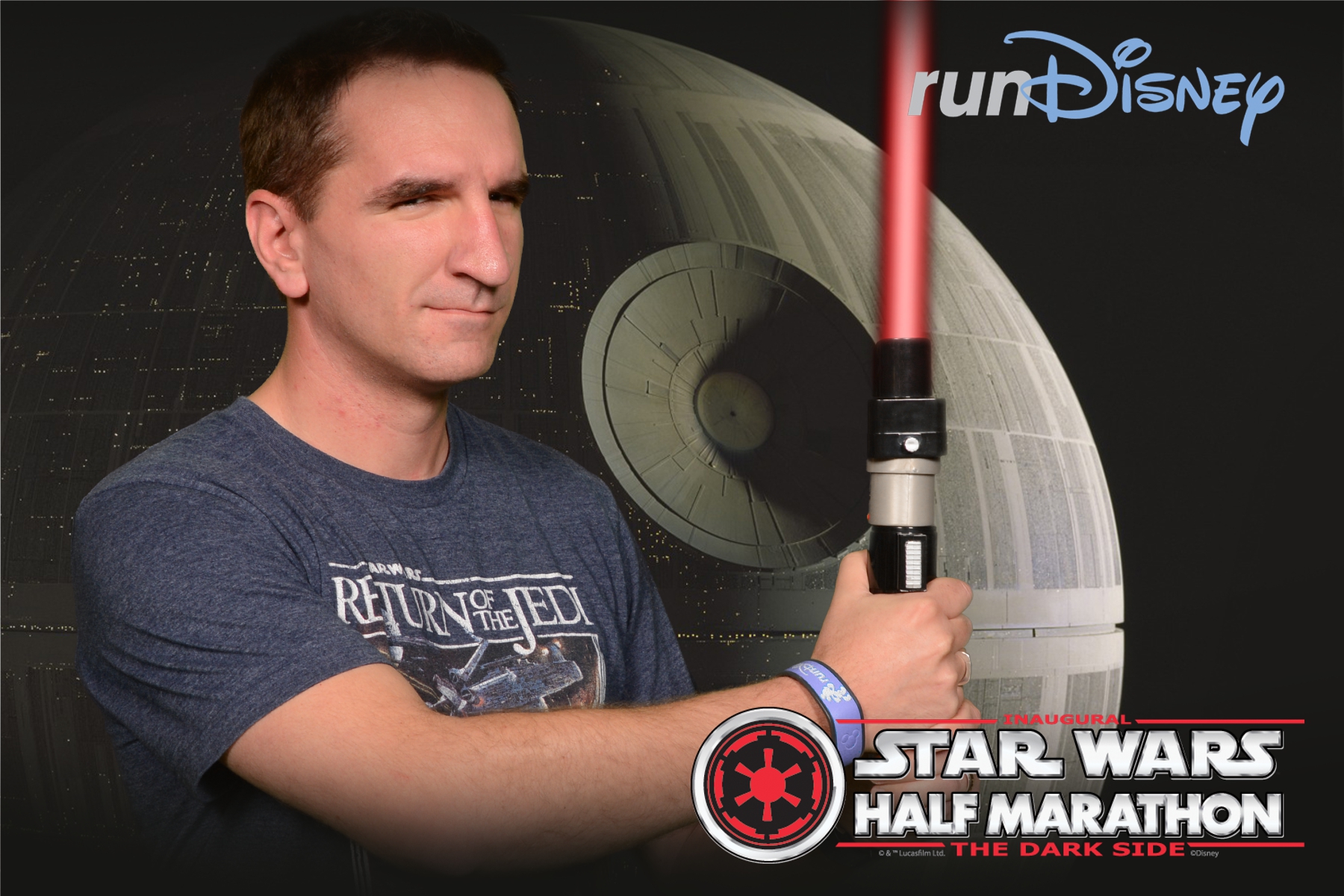 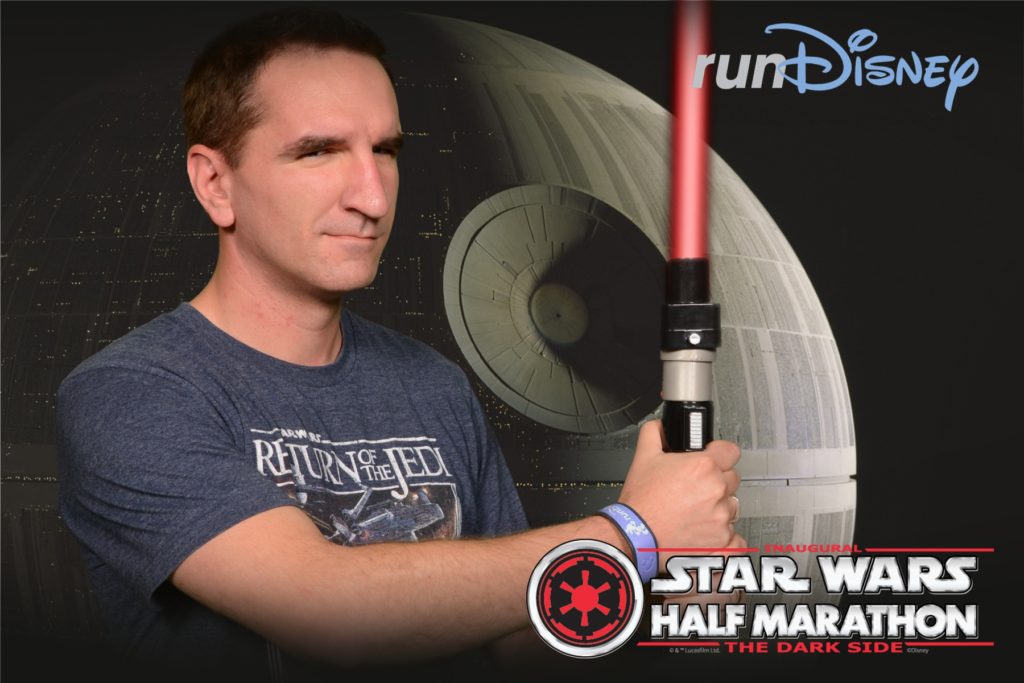 It seemed like the steps backwards that were taken at the Princess expo was fixed this go around. They again opened early. I got there a half hour before opening to check merchandise and they already had a line outside of the store. (It did go quick though!) They had a fun meet and greet with BB-8 as well. Lines flowed better and the expo seemed better organized this time.

I  had a great time with my running team as we met up and had lunch together that day.  It’s always great to see the gang! 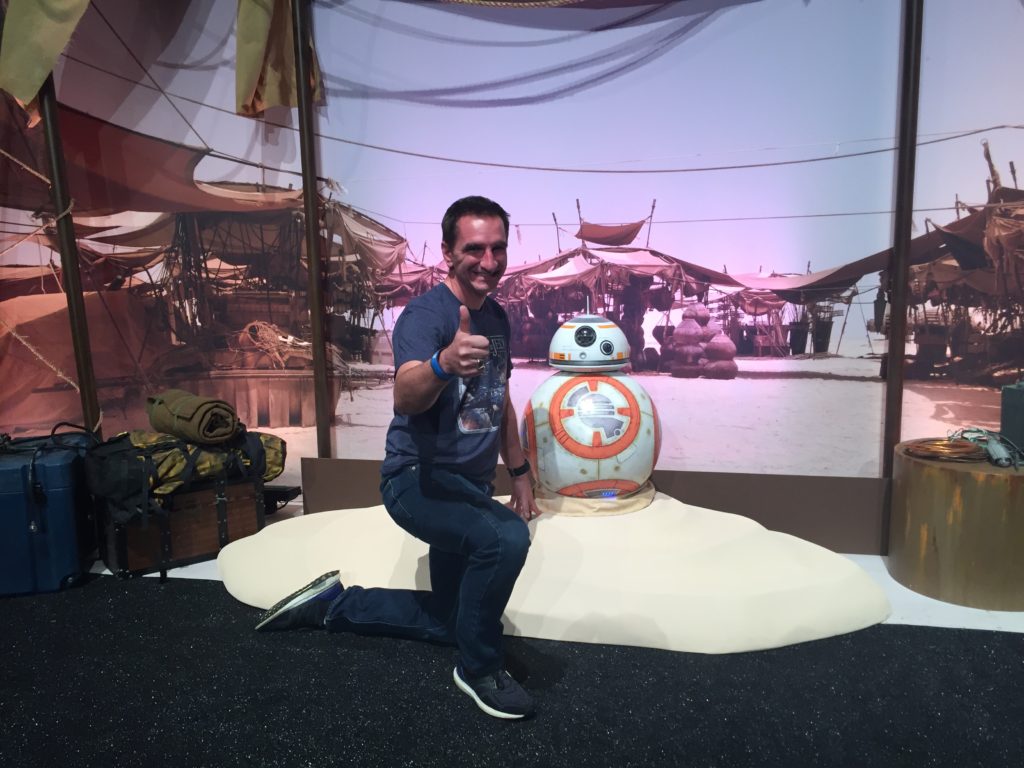 I really wasn’t sure what to expect this series. Were they going to go full Star Wars weekends and have a ton of characters out? What about the fab five who have been said that they wont appear in SW outfits anymore? 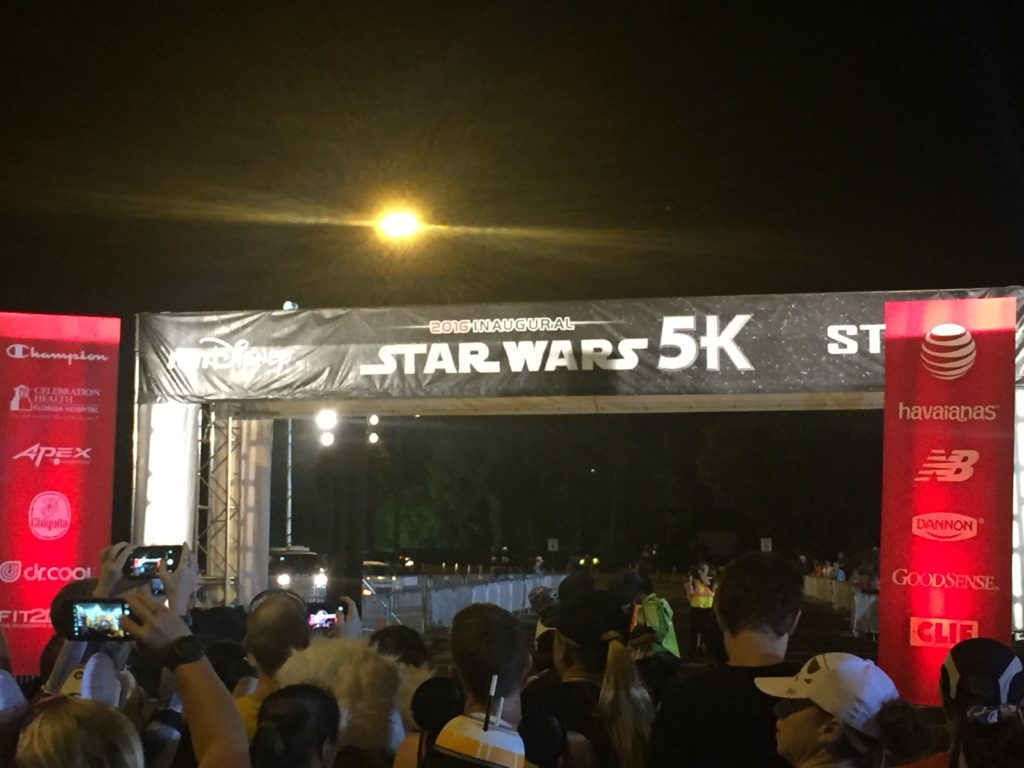 They had an awesome assortment of characters out with really nice backdrops before the race. By far the best I’ve seen at the races yet. They had Boba Fett with Han in carbonite, Jabba, Vader, Maul, new stormtroopers and Phasma! 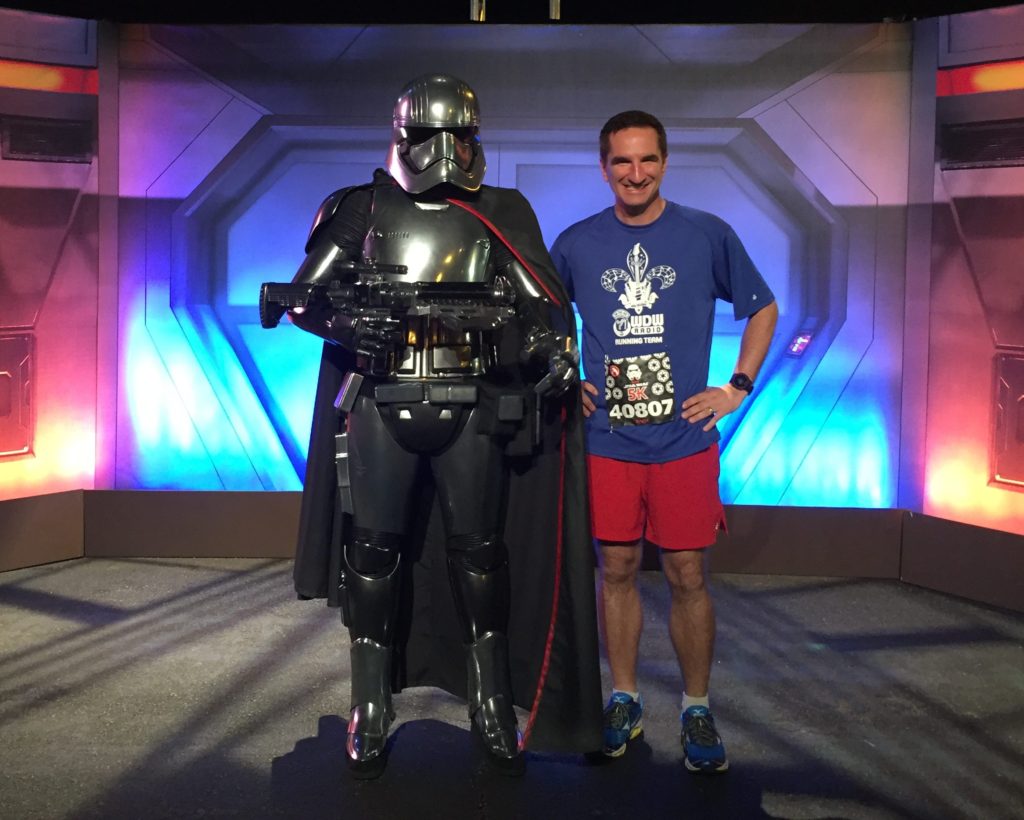 We got some pictures and met up with the team. Lou was in the house for the 5k so we did our traditional race selfie. 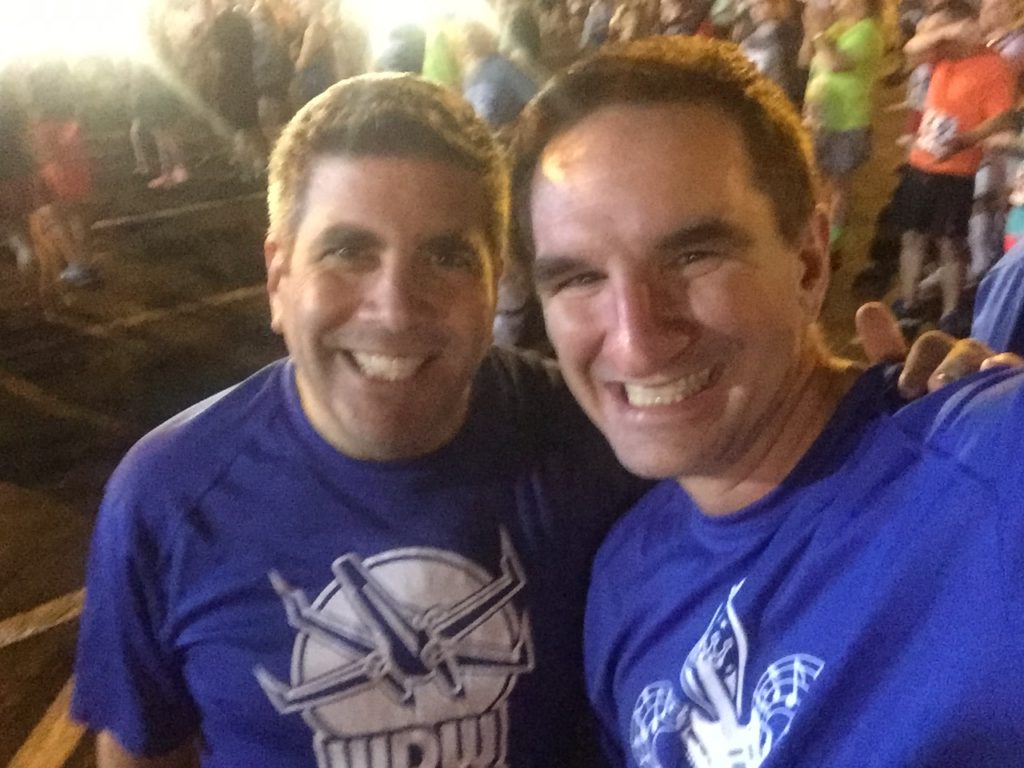 I was really excited about the group of characters! What else was going to be out there if this is at the front????? Well the answer was not much at all.

5Ks usually have between 5-6 character stops in them. Most are typical finds but there is usually one or two rare or off the wall, random character that is an awesome stop.  This one had Ezra and Sabine from the new Rebels cartoon. They were available secretly at an unpublicized eating event at Star Wars weekend.  I think they were #510 and #511 different characters that we have met. 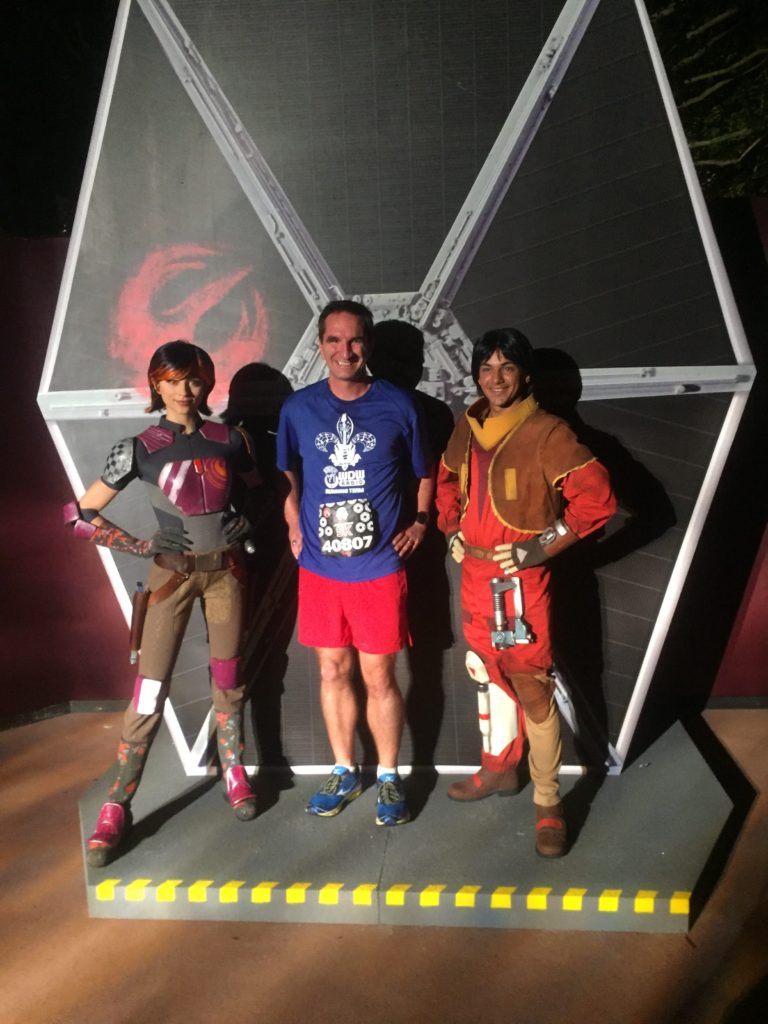 The only other stops were R2-D2 and Chewbacca, both of which were on either end of the park and not in the park itself. I didn’t stop at either since I had them already, but it did get me thinking on what Disney’s strategy seemed to be shaping us as this time. They seem to be more intentional now on not cross-pollinating their brands and this was just another clue to confirm that.

On the plus side, Disney started including photopasses for free for certain levels of passholders.  This was a great perk, one that would have cost me $100 per series before. 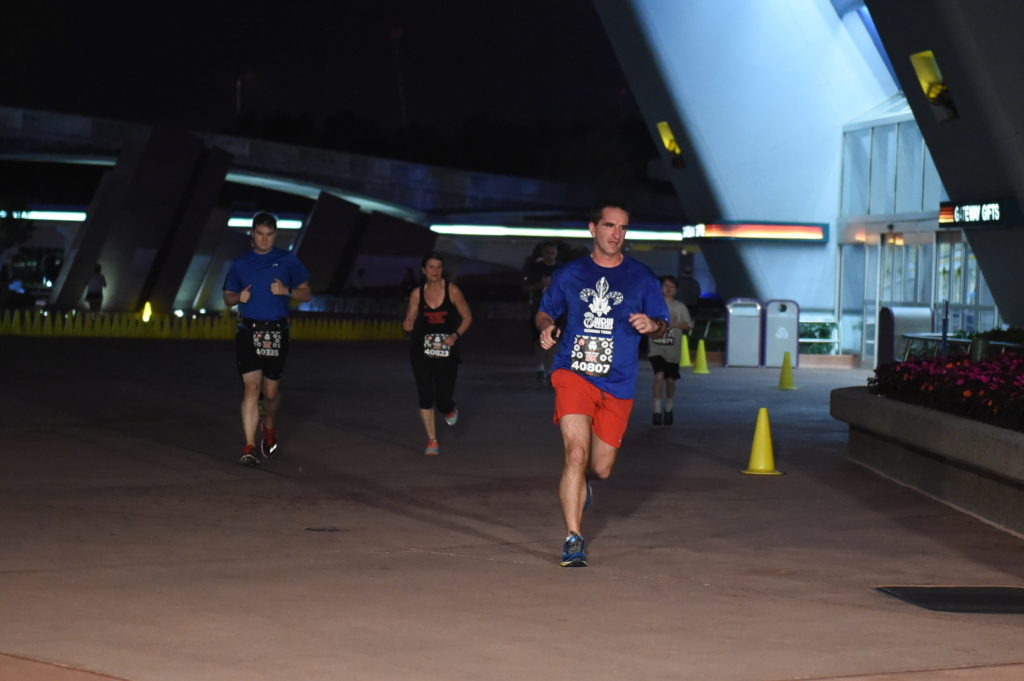 Running around the ball… 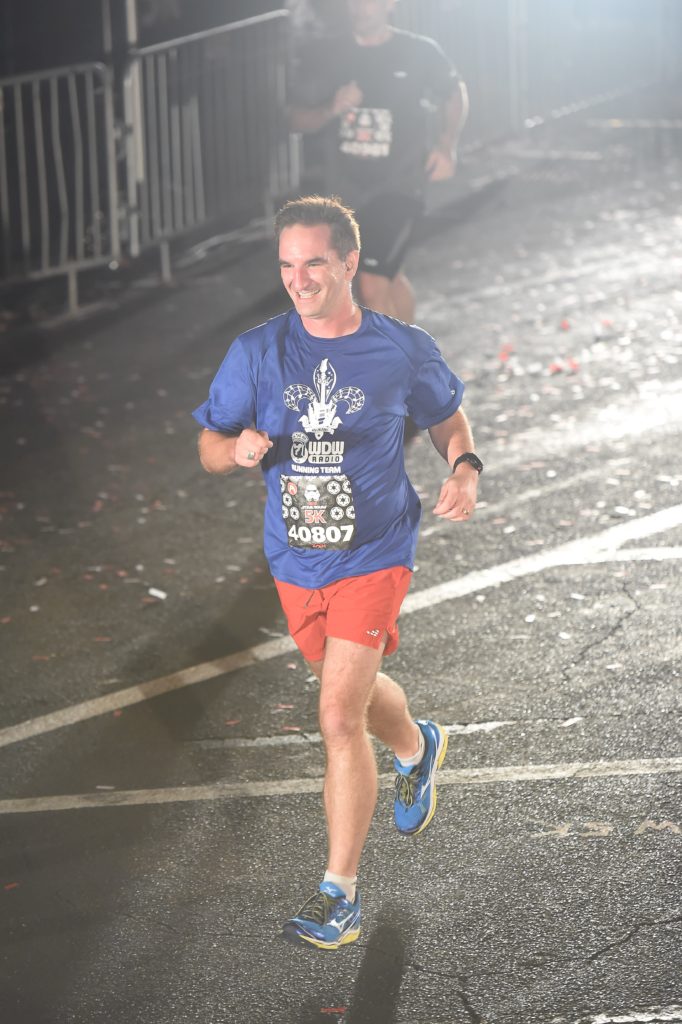 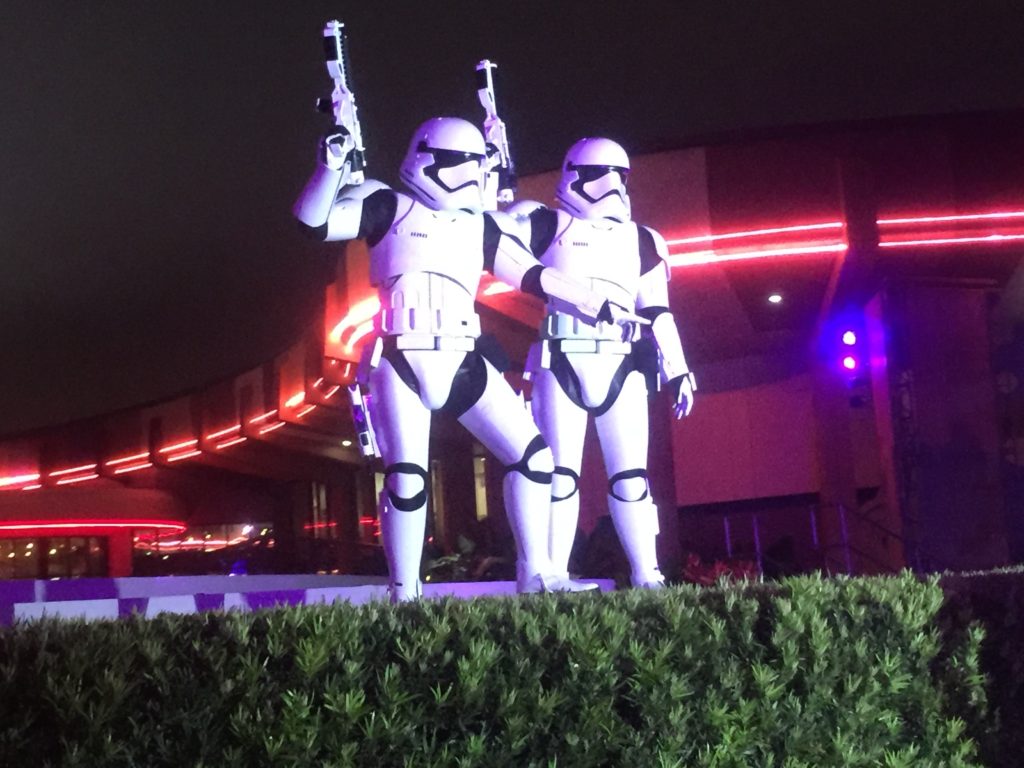 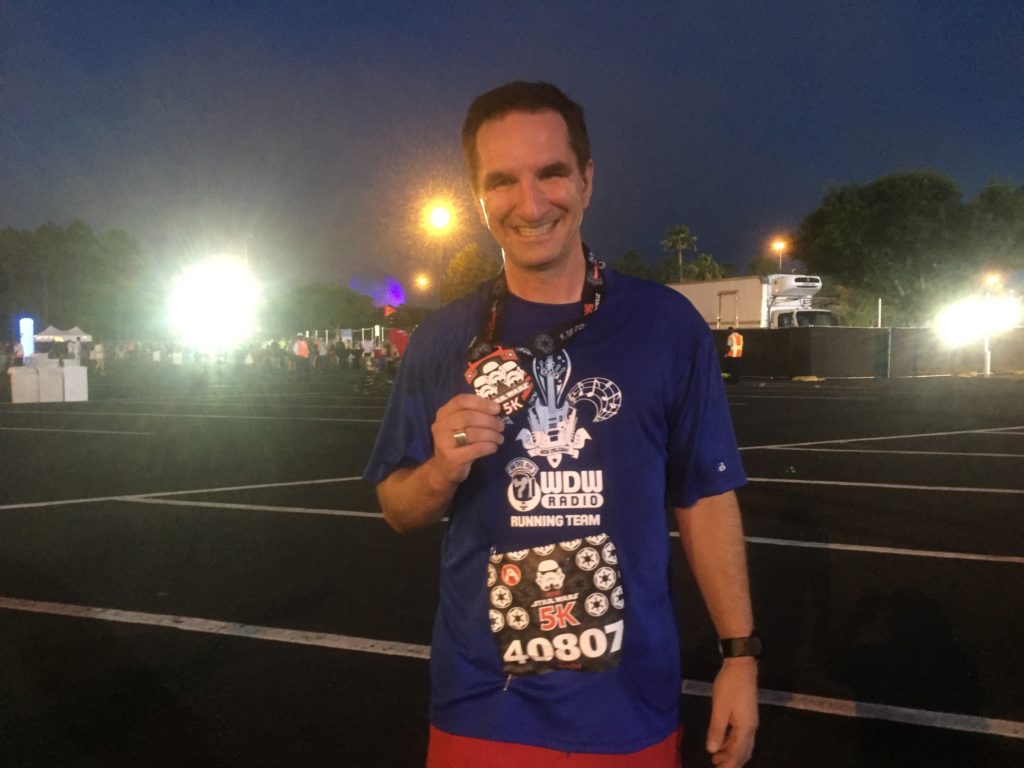 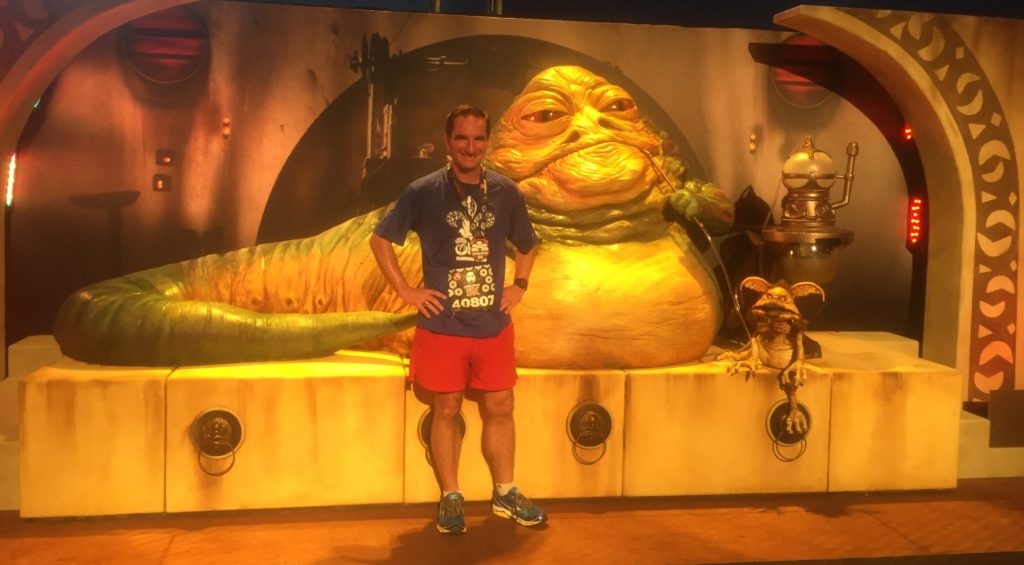 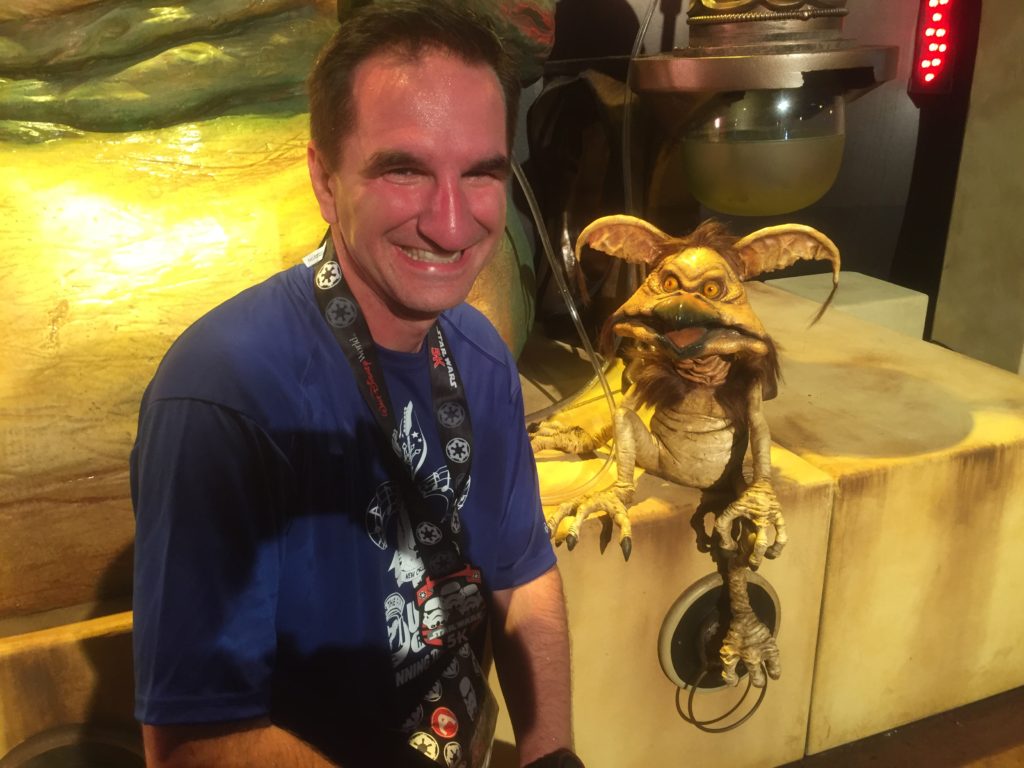 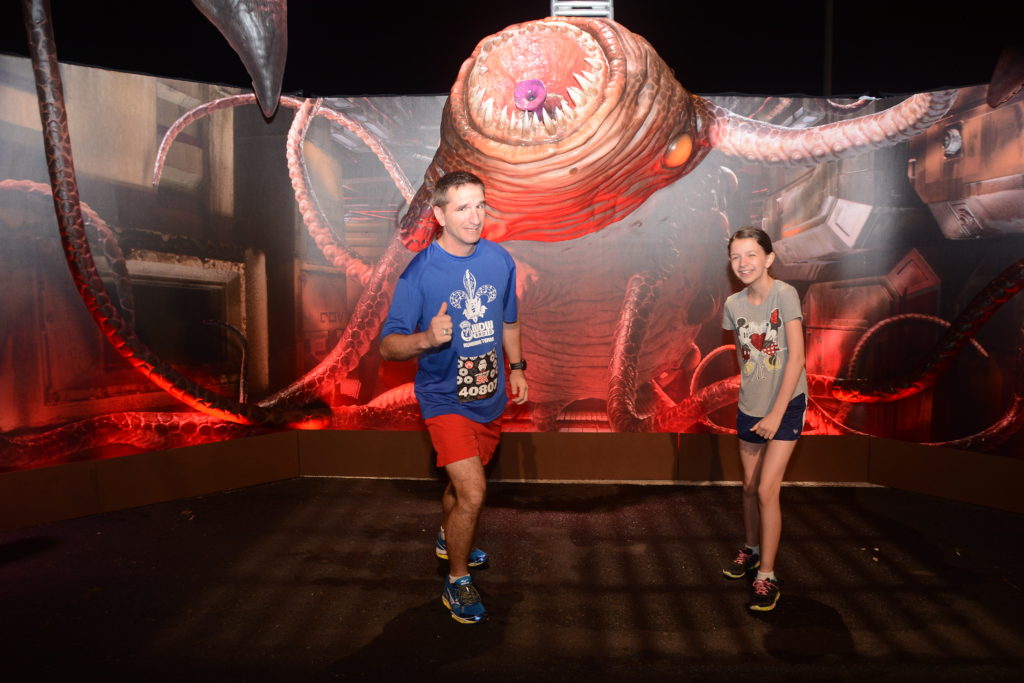 The worm thing from the new movie…run!!!