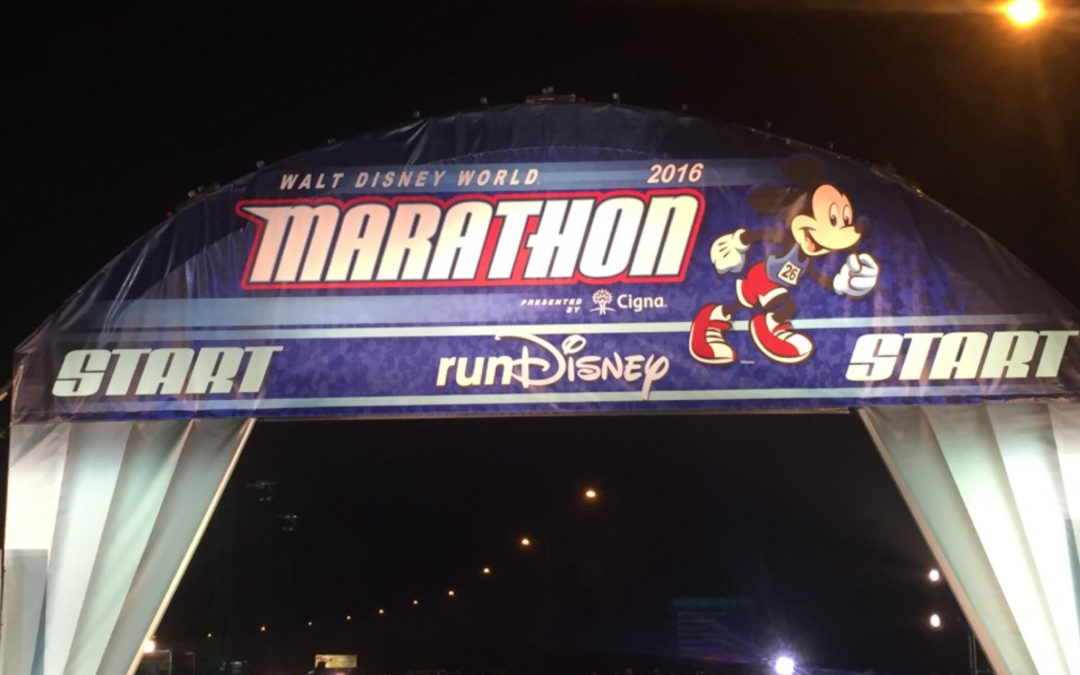 The sun comes out, only to fry everyone.

Day 4. I sleep really well and was feeling much better than I had the day before. I should have been a big ball of nerves since I’ve never run a marathon before, but I had a good sense of peace about the morning. I had broken it up in my mind into 8, 5K segments and a 2 mile transition.

Sharon and the kids were there to drop me off with the WDW Radio Running team. It was really great to have them there for almost all the races. They are a huge support to me! 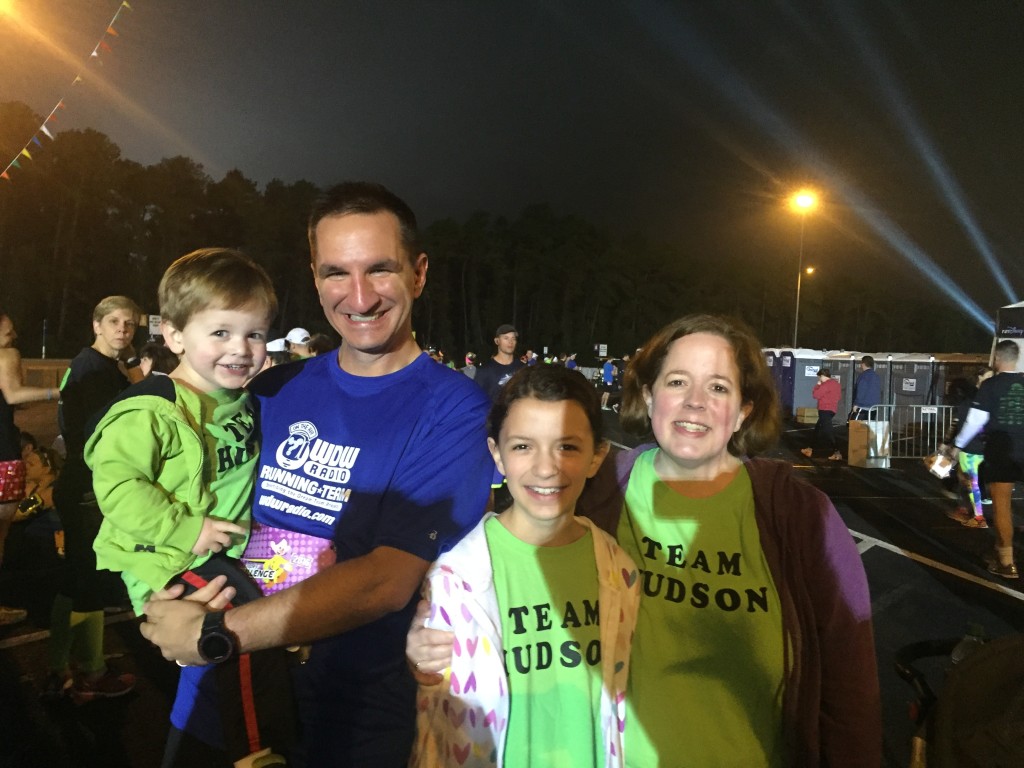 Another day, another reason for me to love my running team. I had left my running watch charger at home. It was at 19% by that morning and should be dead by the time I made it to the Magic Kingdom. Sharon drove me all around Orlando the afternoon before looking for the charger with no luck. I put a message for help out to the group and the Casanos brought me one of their chargers! I plugged my watch into a portable battery and charged it all the way until two minutes before my wave started. I then carried the battery and the cord for a 10K before dropping it off at Magic Kingdom.

Speaking of forgetting something and getting saved… I forgot one critical piece and didn’t realize it until I got to my start coral: deodorant. I texted Sharon and then mentally prepared to smell like Oscar the Grouch for the next 5 hrs.

Even with all the self imposed hurdles, off we went and I was feeling pretty good.  About a 1/4 mile in I found this girl that was pacing exactly the same as me. She was checking her watch regularly, so I started charging mine again and then ghosted her for 3 miles. It worked beautifully. 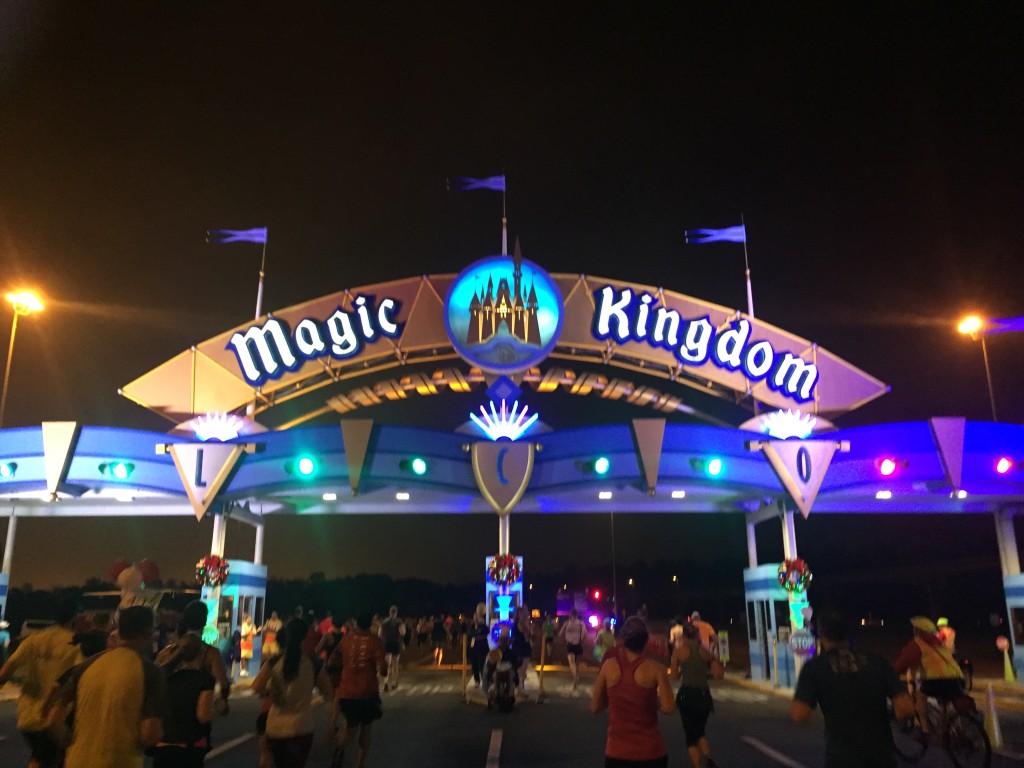 Right at mile 3 was the first characters. The gang from Chicken Little! Here we are again with me getting excited for someone most people weren’t interested in. 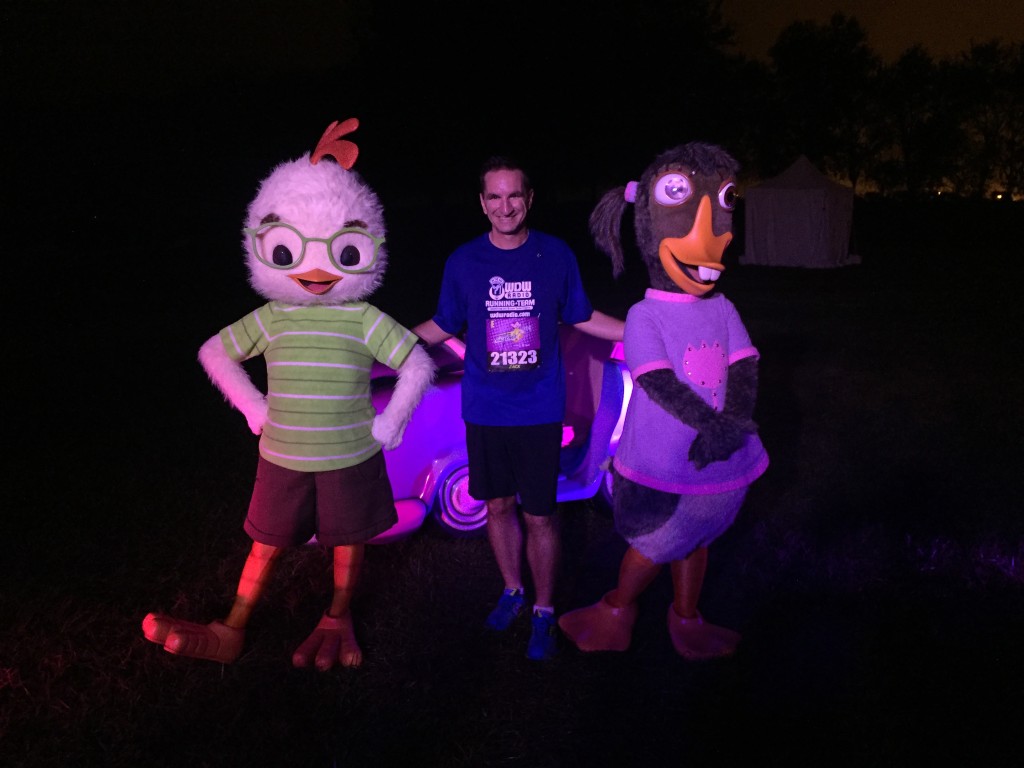 The first 1/4 of the race was exactly like the half the day before. They had Wreck it Ralph out again and Jack Skellington. The segment from the parking lot to the park felt much shorter this time.

The WDW Radio cheer group is in full force at Magic Kingdom. Deanna had also coordinated food stops for us along the race. Not only was it a great morale boost just seeing them, but the snacks were perfect too. 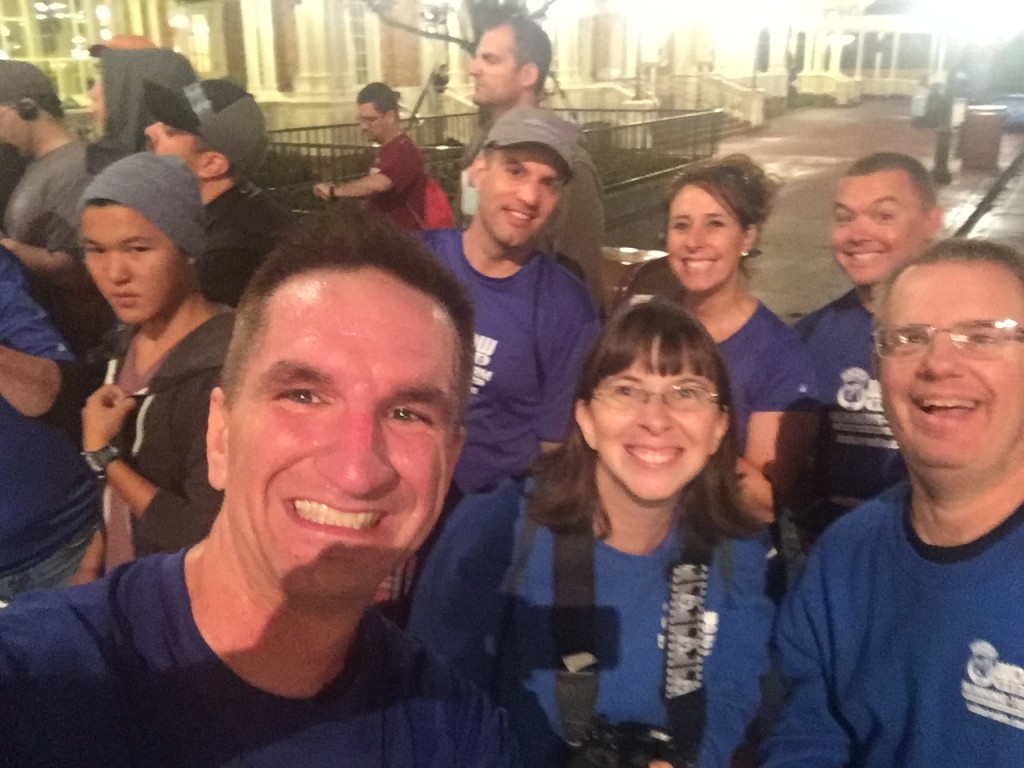 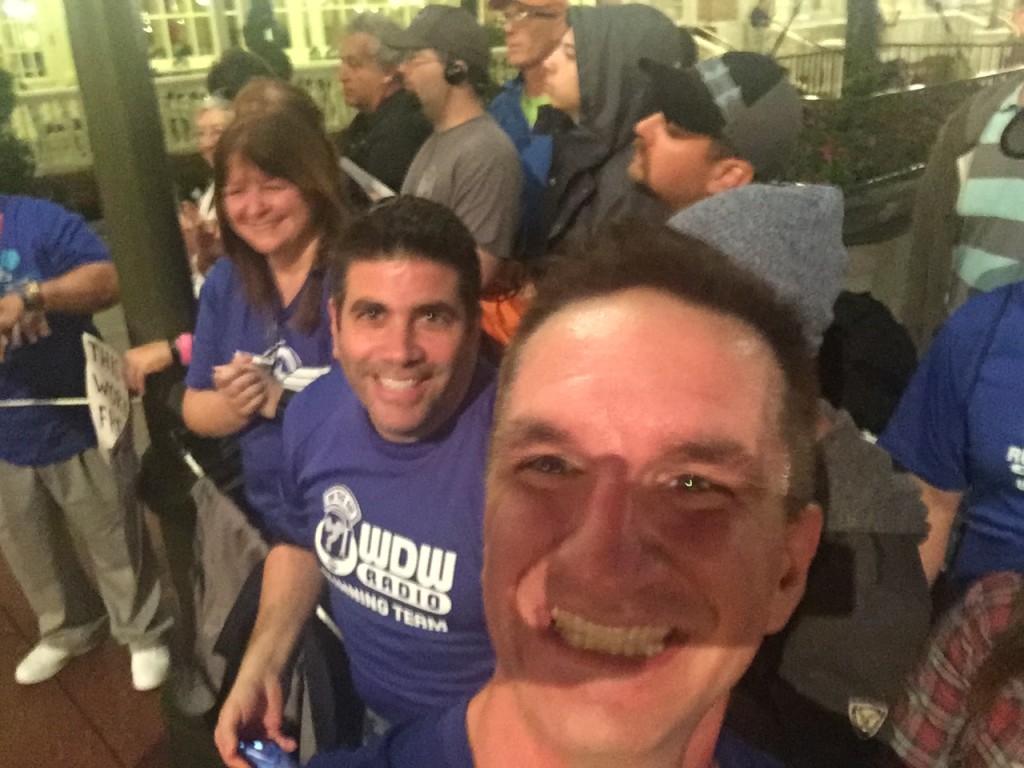 I didn’t even realize Frank was there at the time. I could have handed his charger back to him!

Main Street was just as amazing. Its hard to describe the feeling…you are out in the dark for the most part before entering the park. There is something magical about turning the corner into the park that’s lit up and people are cheering like crazy for you. The castle is there lit up as well. It can be an emotional thing to take in.

There were a ton of characters again in the park. You had Lilo/Stitch, Alice/White Rabbit and Ariel/Sebastian.  Ariel was the only one during the whole weekend where I didn’t stop for someone I didn’t have. She was in a nice purple dress and it was a variation of the character that I hadn’t met, but the line was just too long. It double backed in on itself. Since it was just a variation and not a true unique find, I kept going. 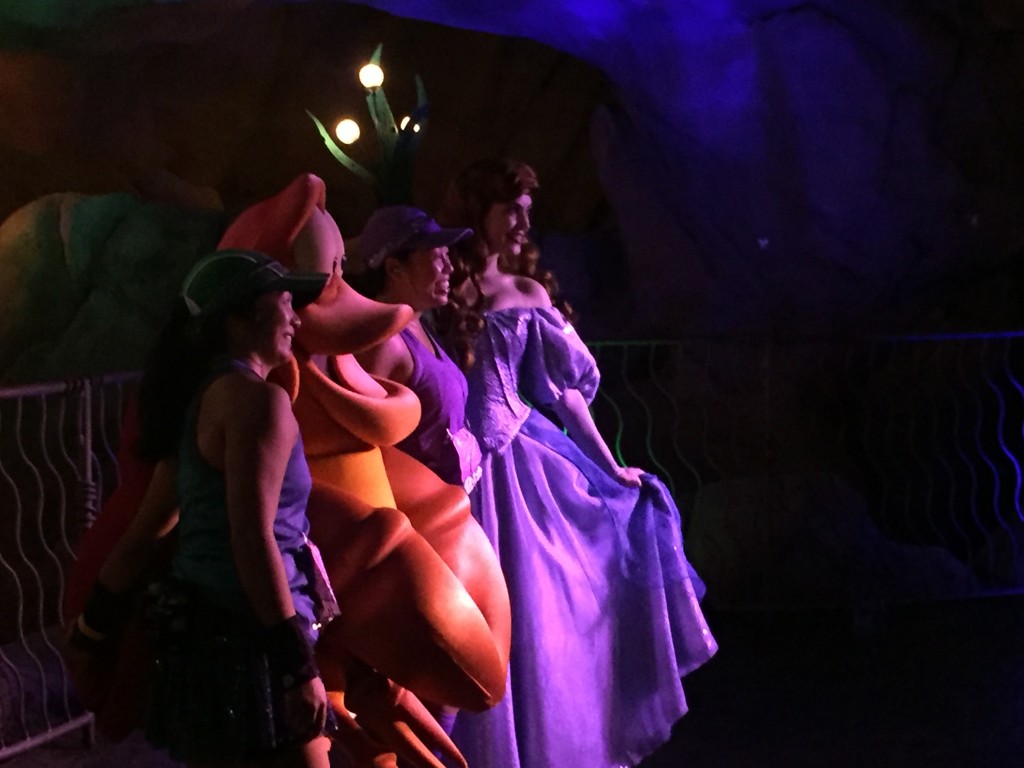 I did stop at the next one though. Cogsworth and Luminere were swapping out times at the next spot. I haven’t met either, so I was happy to see Cogsworth. 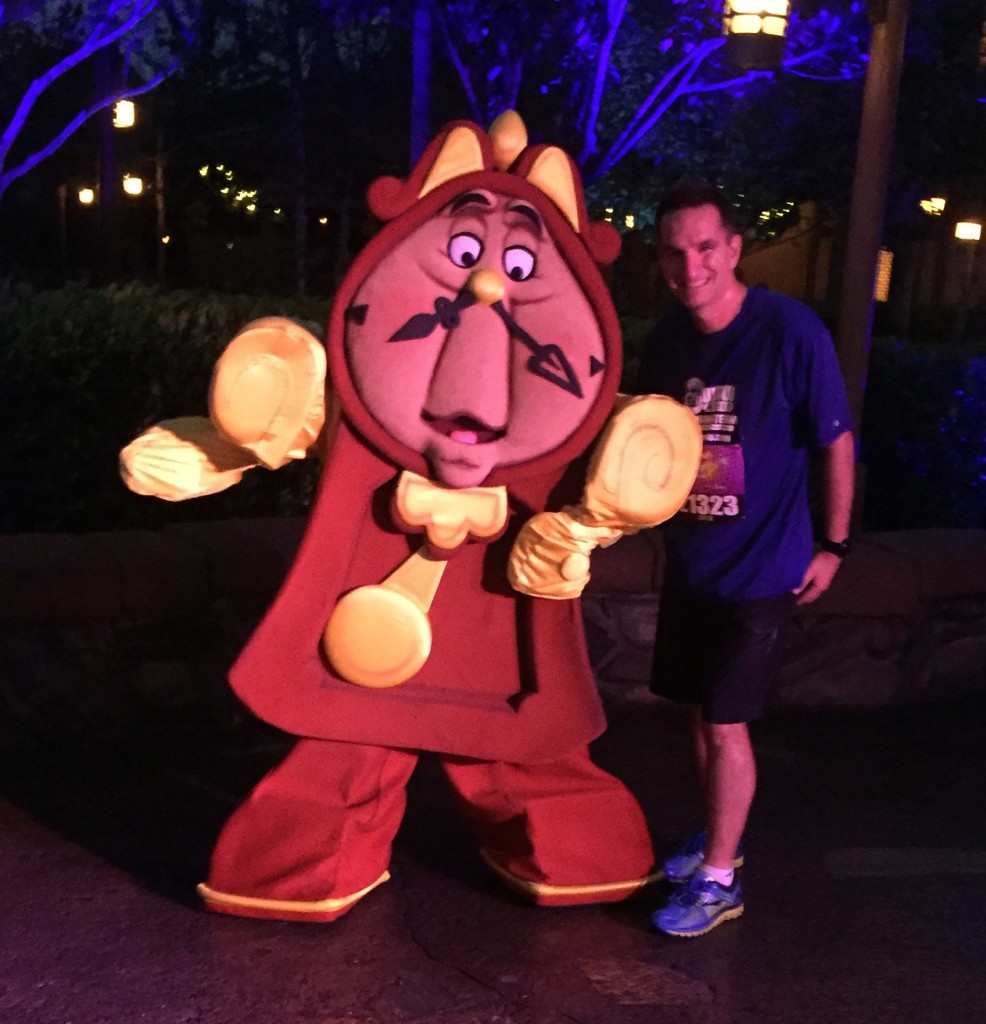 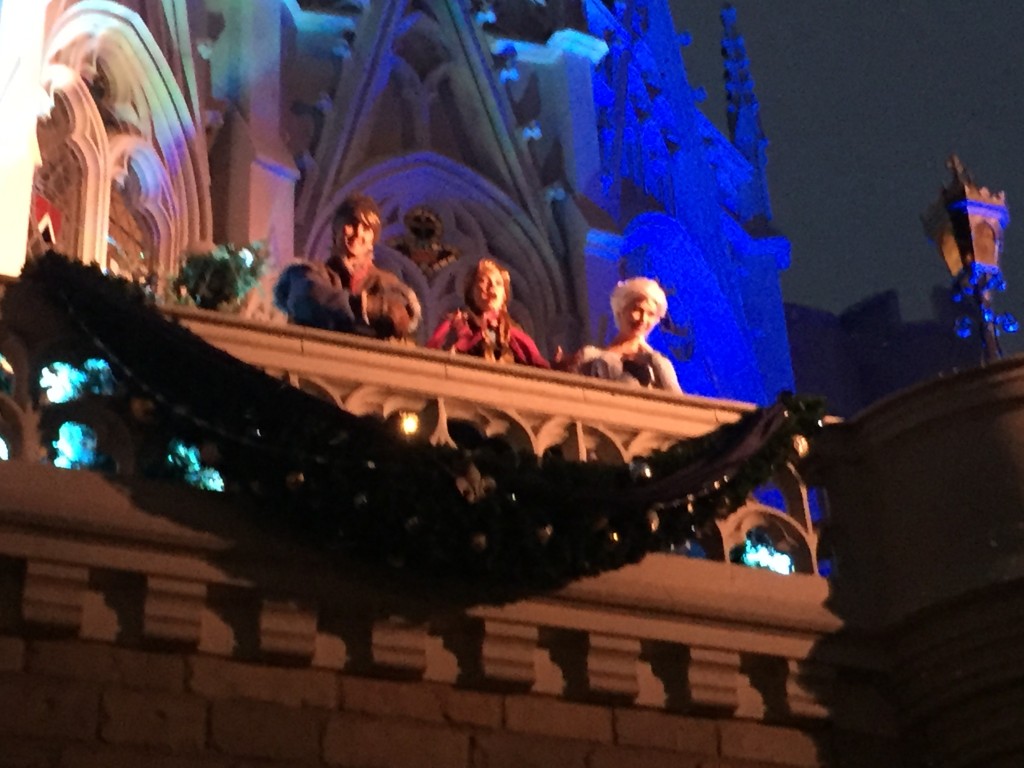 Remember Oscar the Grouch? Well it was already starting to show I made it where Sharon was. So she had gotten my text earlier and actually found deodorant for sale in the MK! She saved me again. That was a huge morale boost. After taking a moment to say hey to everyone, I continued off. Just on the other side of the bridge was the Princess and the Frog gang. I told them I was from Shreveport and they were thoroughly unimpressed. 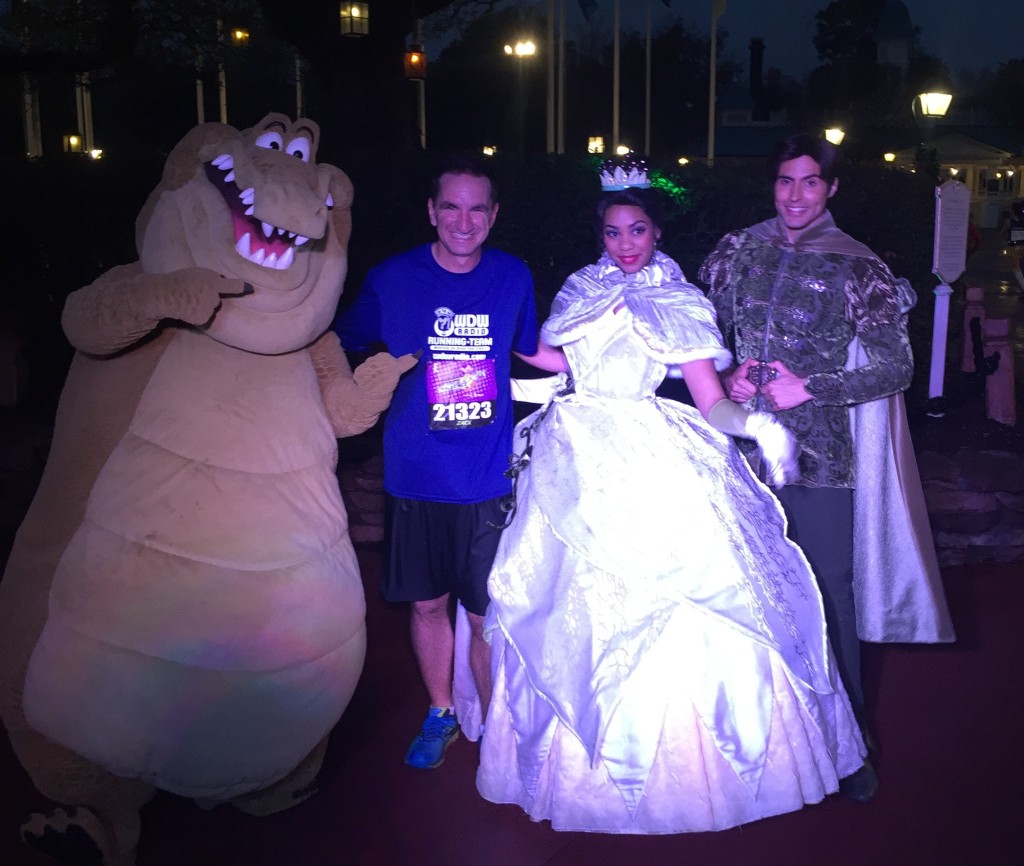 There were still several other characters including the Country Bears and Brer Rabbit.  The train was back as well and this time Maleficent’s evil henchmen where out where Peter Pan was. They were really neat! 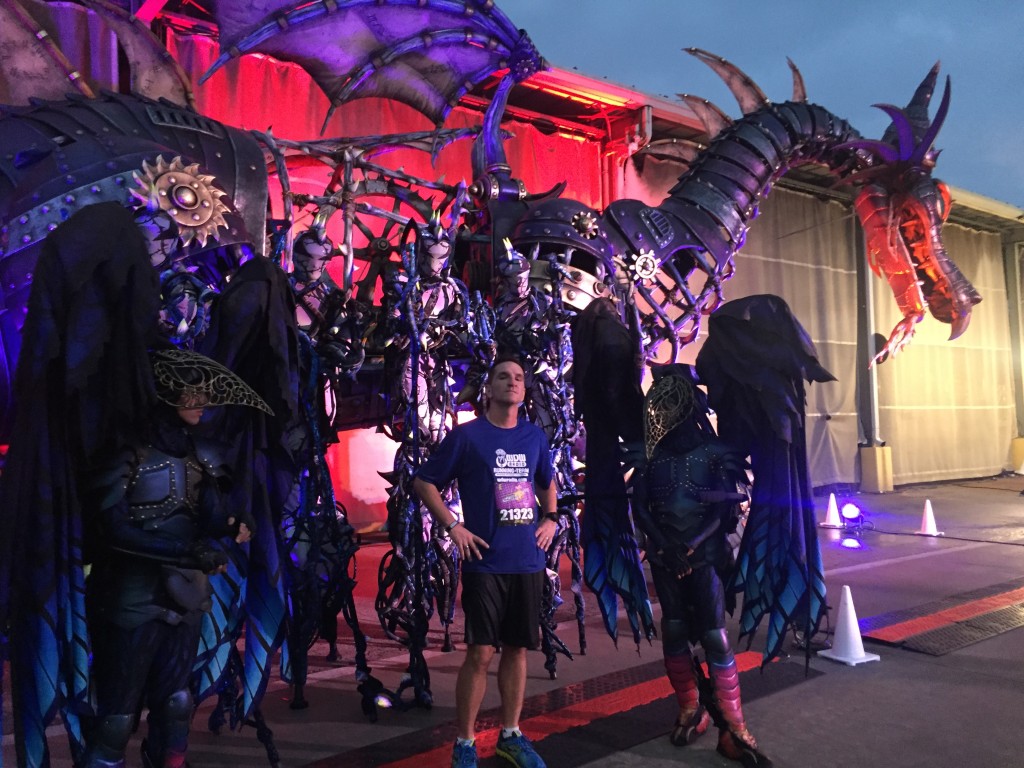 The course then went on the backside of the resorts again. Bert, Lilo and golf Donald were back out again. The first WDW snack stop was also back here. It was awesome to be on mile 8 eating a box of nerds and sucking on a pretzel stick.

The next “stage” was a long stretch on a back road to Animal Kingdom. I’d heard a lot about how boring it was. I think they did a good job this year breaking it up with villain character stops. Hades was first, but he was MIA when I passed through. I did see the Evil Hag, and Shan Yu (Mulan). They also had Jafar with a neat backdrop. 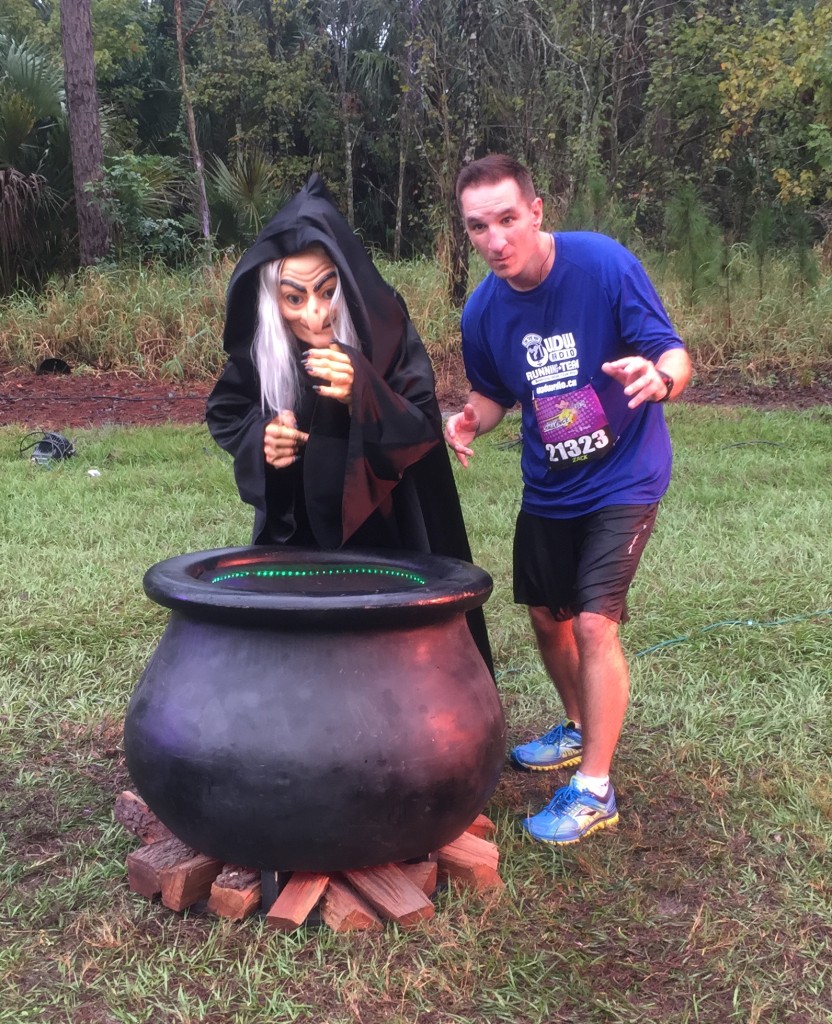 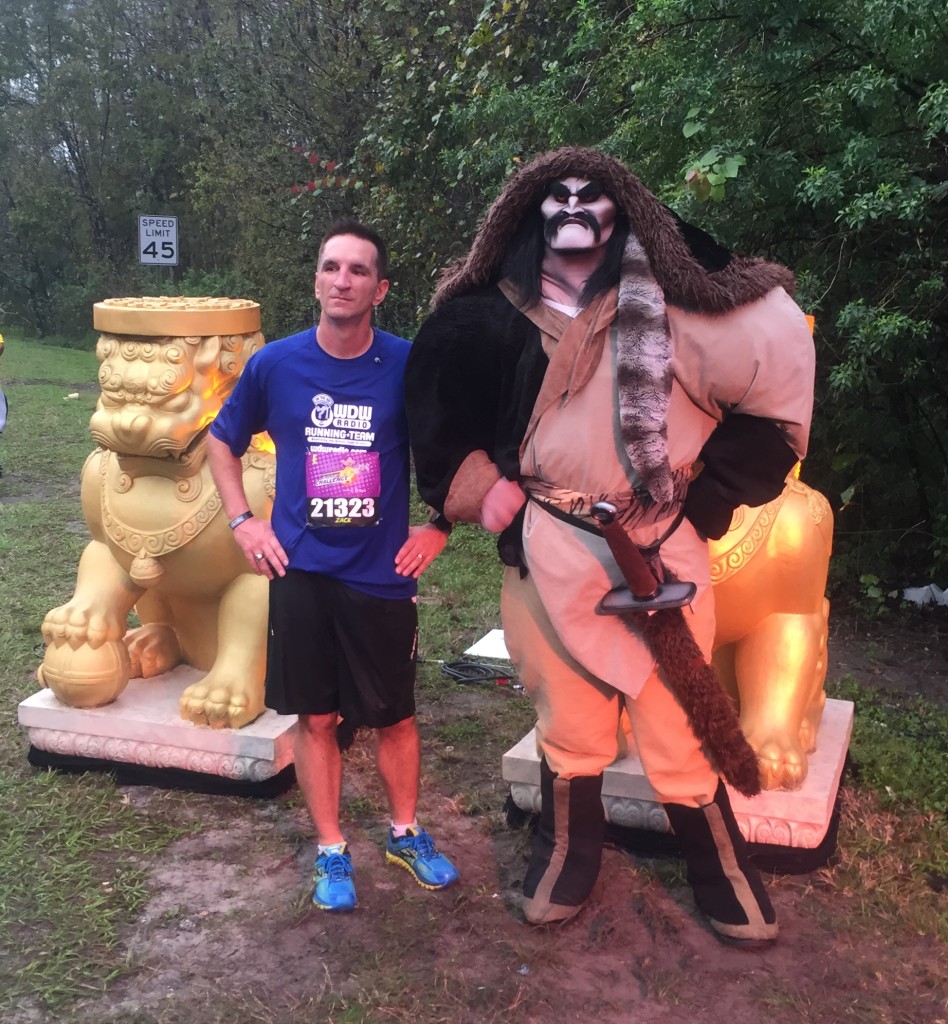 I was also able to meet Barbosa who I was really hoping would be out on the course. Some of my conversation with them:

Jack looks over to Barbosa, “Who’s he calling gentlemen, Mate?” 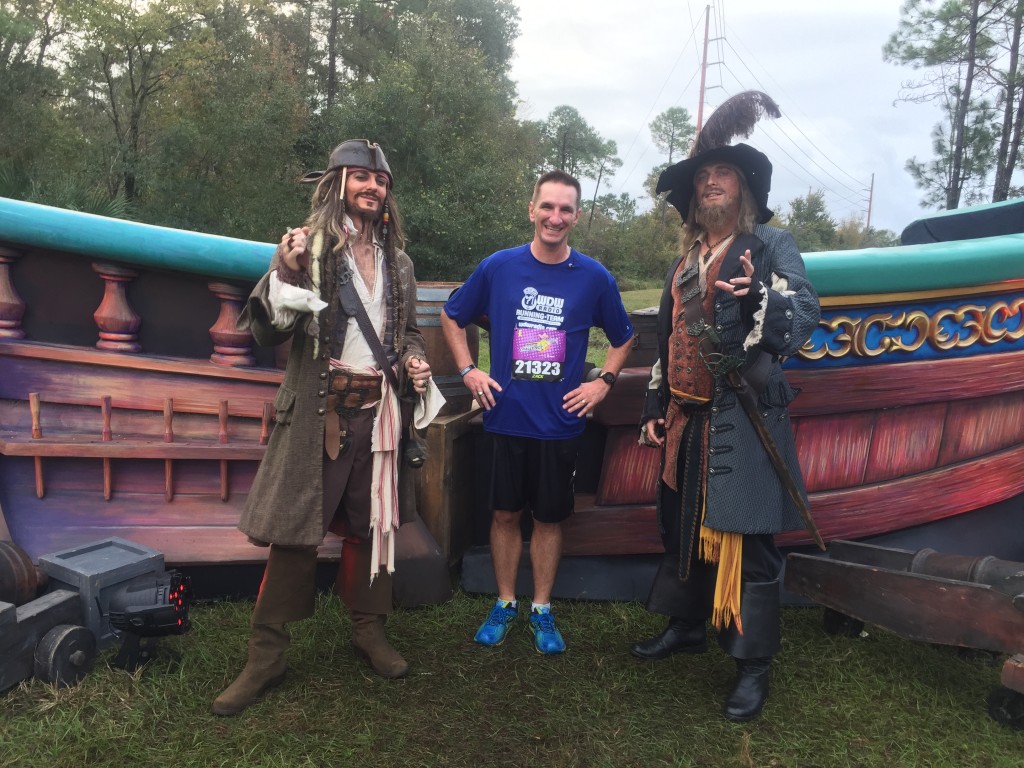 Animal Kingdom seemed really short and the parking lot seemed like it took forever. I stopped for the Lion King group, but that was really it for that park. They had Safari Daisy, Timon, Baloo and Louie out. They also had a bunch of animals out that were really fun. They made little jerseys for most of them and they each had their own race bib with their name on it. I really wish I had gotten a picture of them. 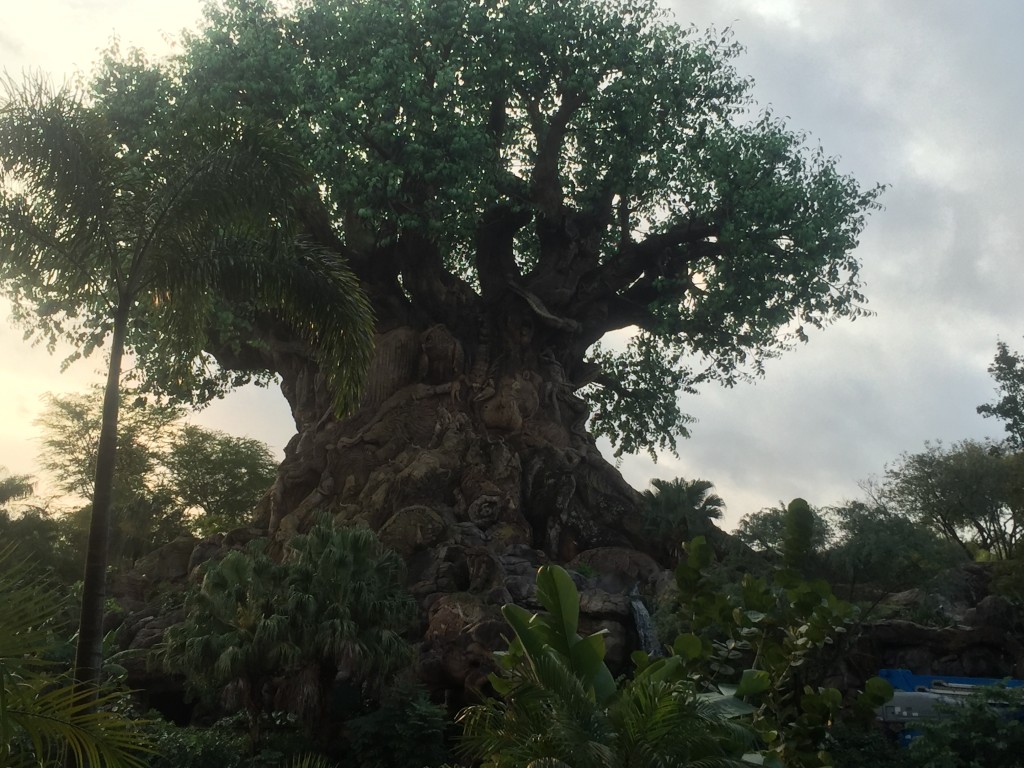 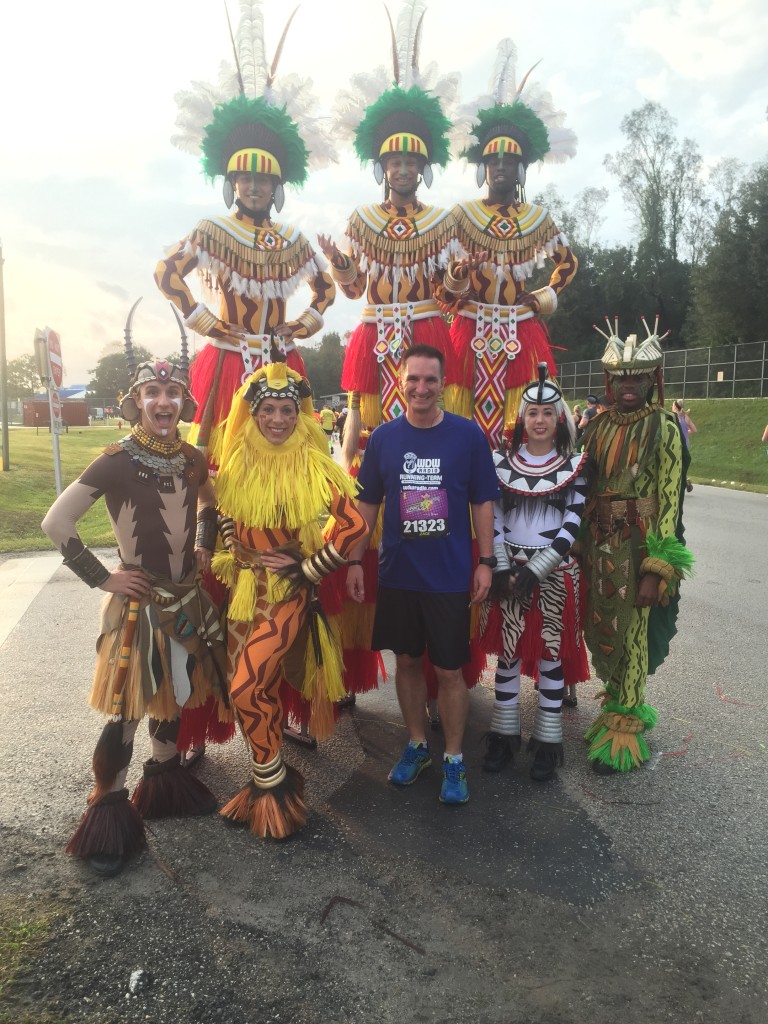 It was another 5K to ESPN from Animal Kingdom. Not much as far as entertainment on this stretch.  There were a bunch of spectators handing out goodies here though. I got some fresh fruit, candy and a coke!

I was really starting to get worn out by the time I got to ESPN (Mile 20ish) and was also starting to get a little chaffed in areas. ESPN wasnt the black hole for me that it is for some. Its basically a 5K that winds in and out of the complex. They had several characters in there and it was nice and flat, so I enjoyed it. I walked a ton here. 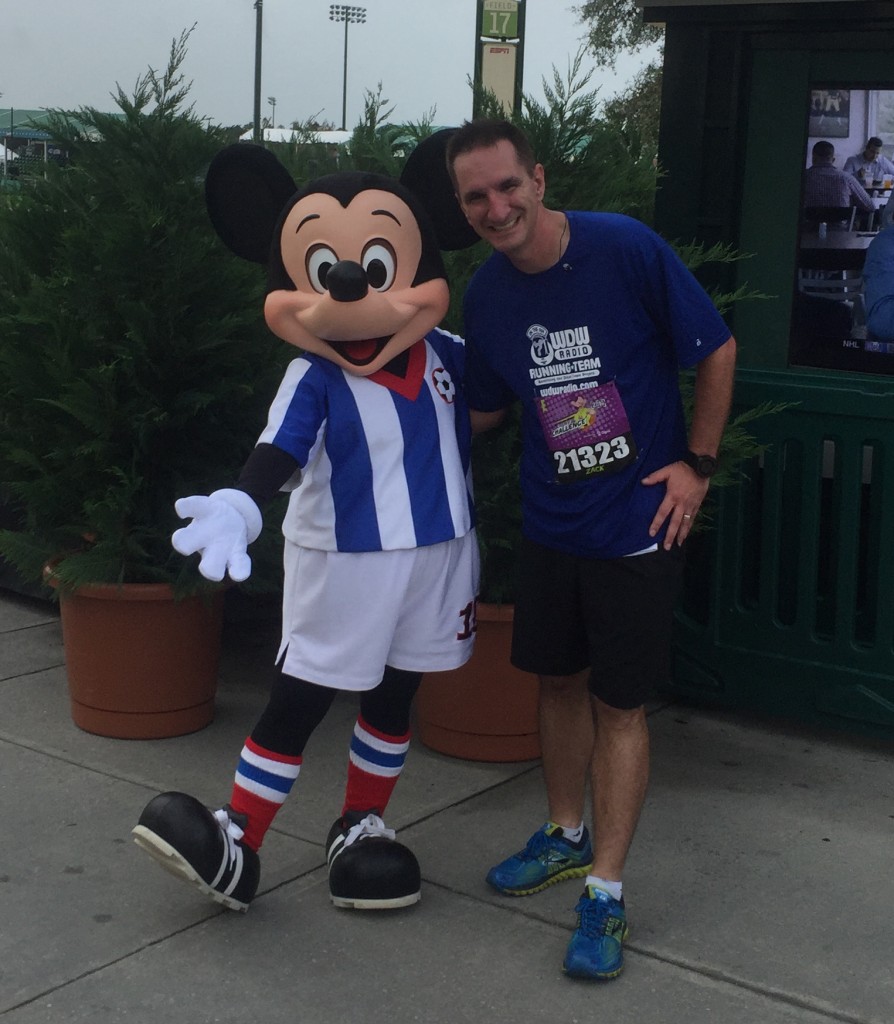 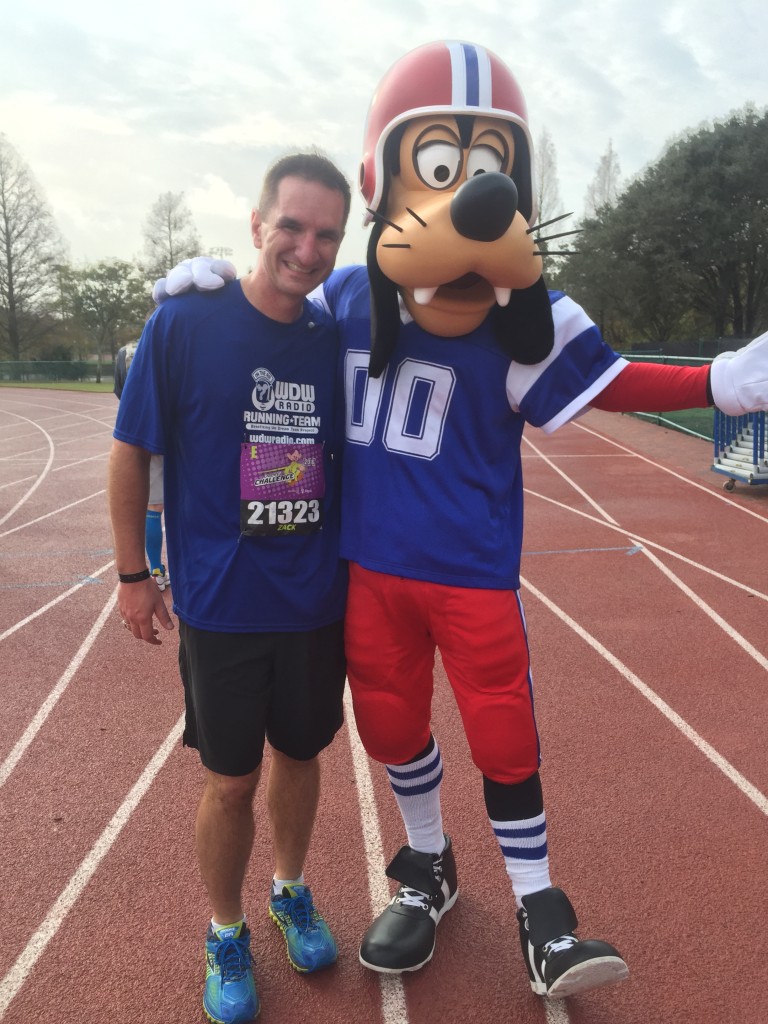 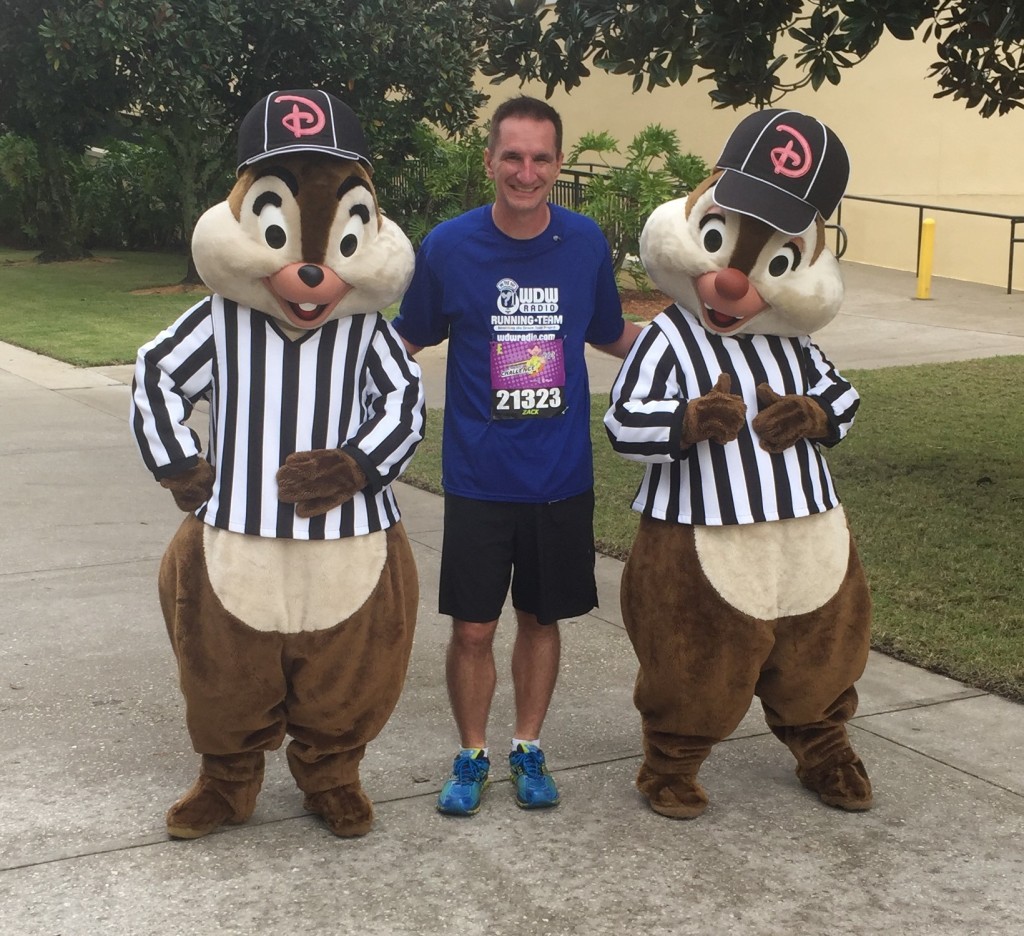 I left ESPN knowing I only had a little over 4 miles left to the finish. I stopped at one of the medical tents to get something for the chaffing. My stuff had worn off after the long distance. The cast member slapped me with a huge thing of vasoline….which was just sticky and actually made it worse.  So, now I’m really struggling. I stop at the next medical tent to see if they had anything else. They then give me a bunch of biofreeze. Now, I didn’t know that biofreeze is basically icy hot until I applied it to myself…..and felt the fire consume my body!

At this point, I’m thinking just push on through and make it.

Hollywood Studios was open and it was a quick in and out of that park. I did stop for Boo who was tucked away at the end of a tunnel. 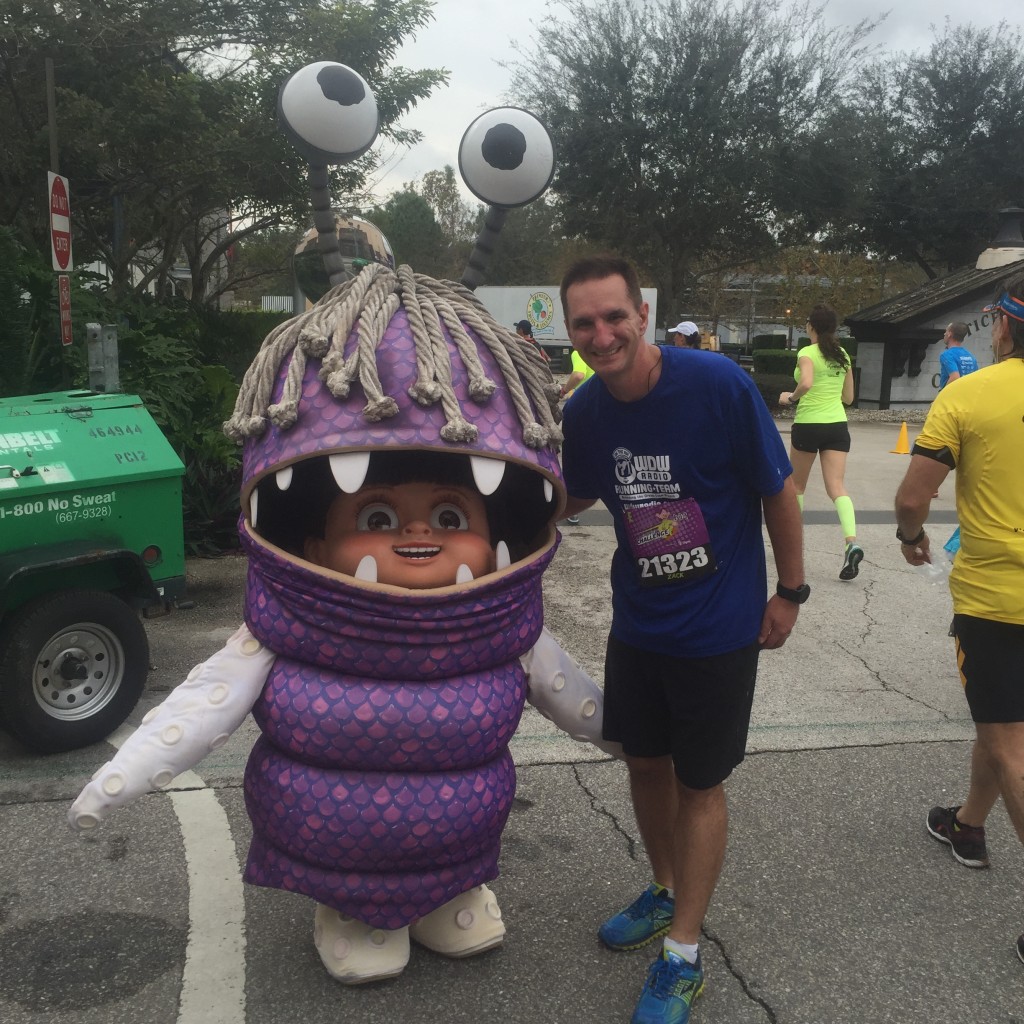 The last bit went by pretty quick. It was great to see the main WDW Radio cheer group right before Epcot. It was a good morale boost to the final kick!  There were several characters in Epcot including Mulan, and Jasmine. There were also a ton of people cheering and guests just there for the day.

I finally made it across the finish line and I didn’t even cry like I thought I would. Sharon and the kids were there to greet me at the end. We went and had brunch, changed clothes and got another massage.  I cant believe that I made it! 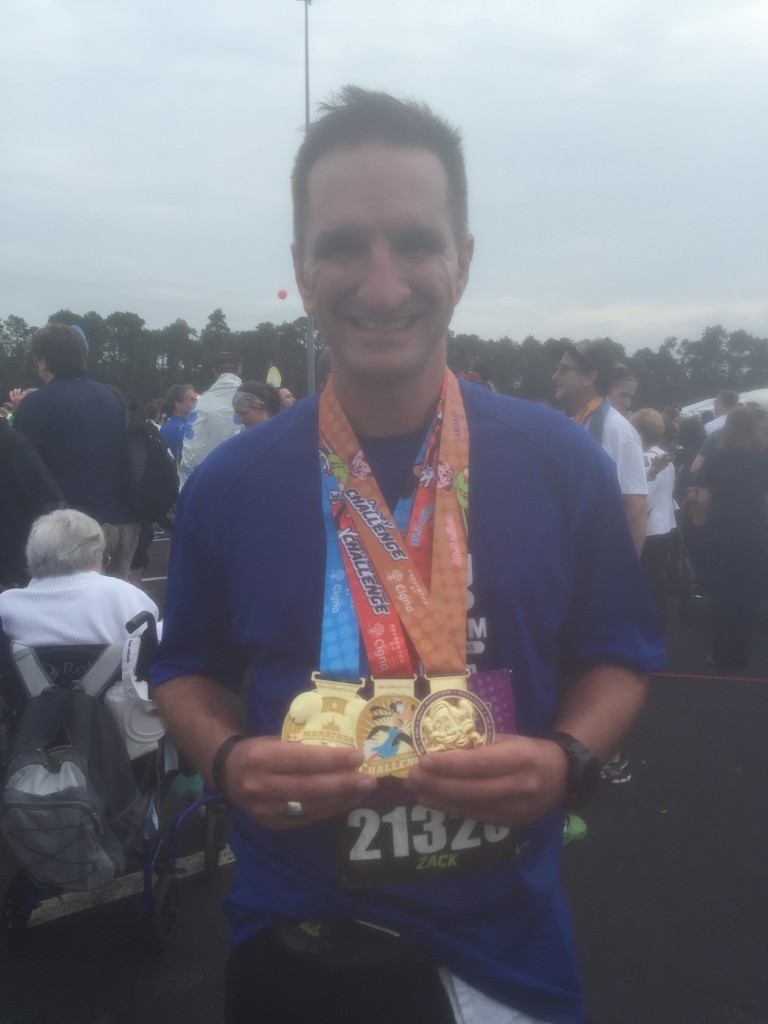 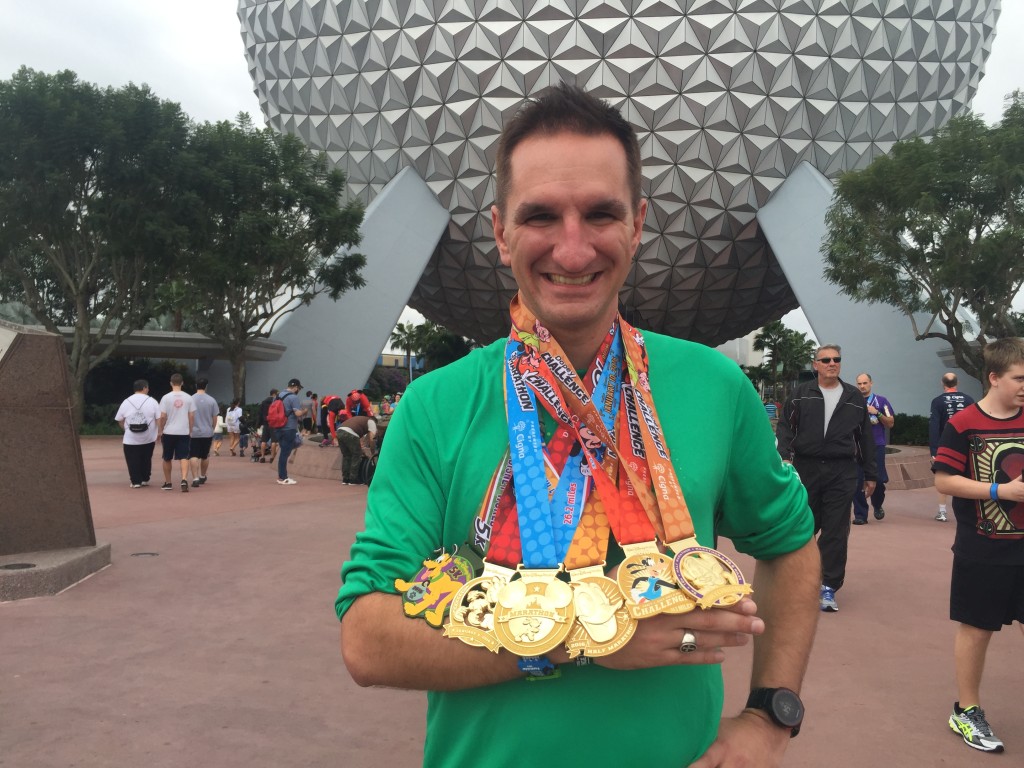