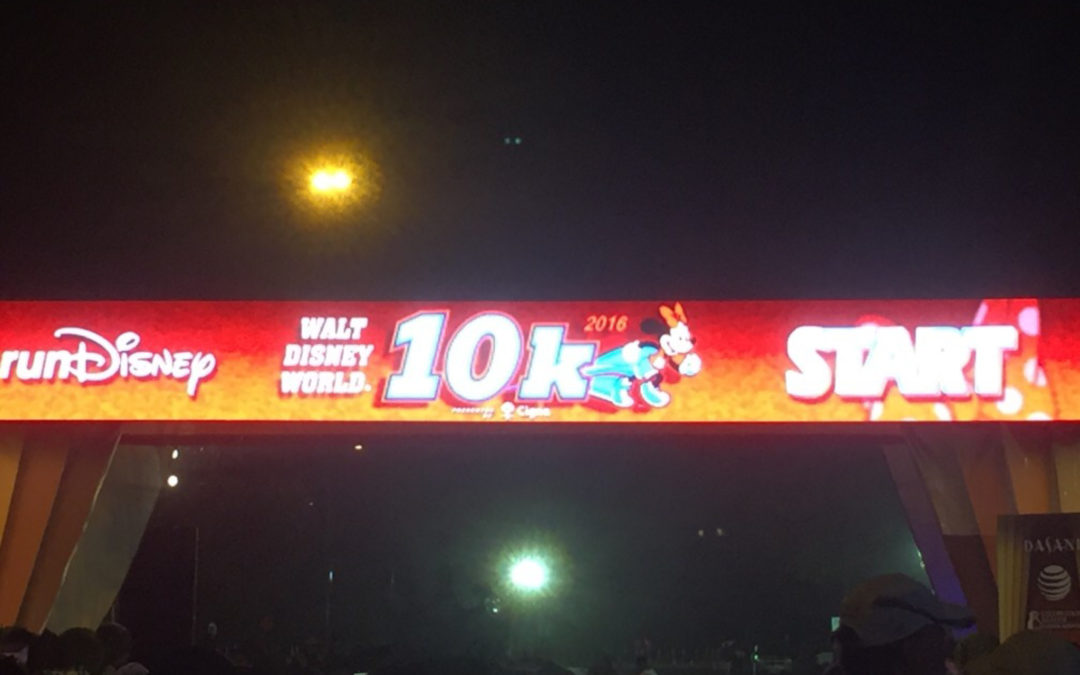 The rain, oh the rain.

Man, this race….and the rain. This was my 2nd race in the series and 4th ever Disney race. At this point 75% of the Disney races I’ve run have gotten rained on. It was about 6-8 degrees warmer than the day before, but the rain really came down for this race.  Sharon and the kids got there the day before so they were there to cheer me on for the remainder of the events.

There was no delay in the race, but I was concerned that they would pull characters from the course because of the weather. I was towards the front of the A coral and off we went.  This course added more mileage outside of Epcot and included the boardwalk area on the other side of Epcot.

We took off and there is a spot over looking the course set up for Frozen, but they were not out. The next spot had a plane and was playing familiar music……I had a feeling it was Ducktales, but again no characters.  The course looped back in on itself and there was finally a character stop. Flick and Atta! I’ve met Flick before never Atta, so I stopped. There was a long line and by the time I got to the front, I could see the next wave coming over the hill at us. The line really got motivated then to get a quick picture and get moving again. 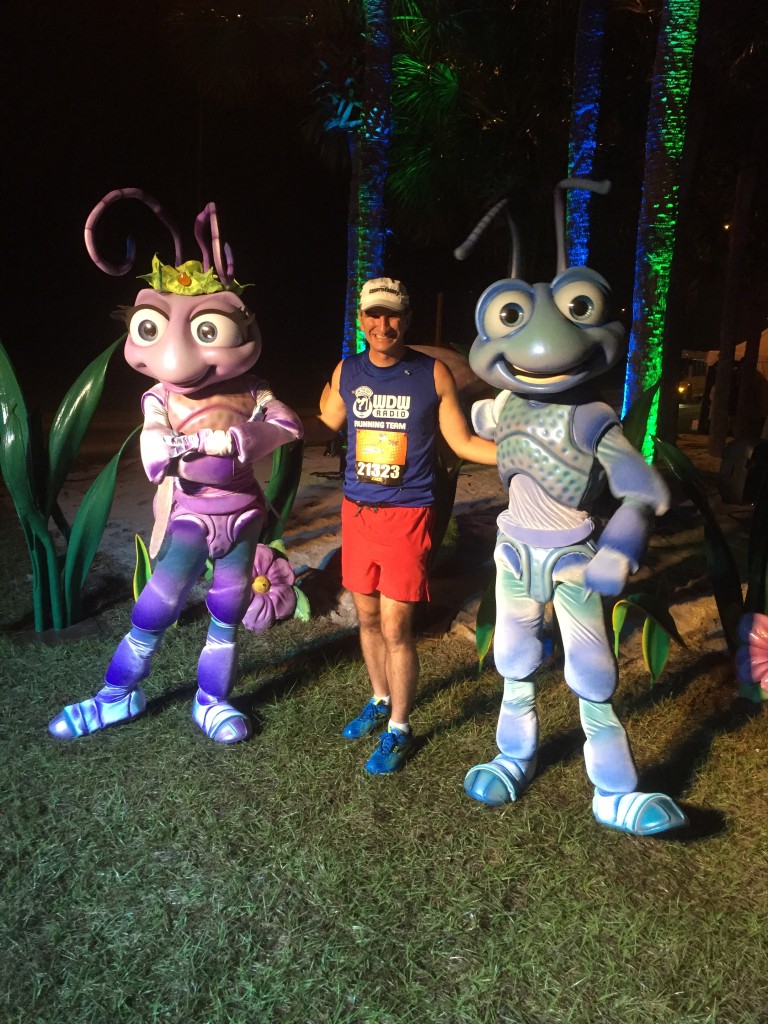 There was a momentary lapse in the rain when I was getting my picture. I could also see that the Frozen characters had come out as well. What I didn’t realize is that Darkwing Duck and Launchpad McQuack had come out as well. My biggest miss for the whole trip was not getting them. I would have turned around and gone back to get them had I known! Unfortunately, they weren’t at any of the other races that weekend either.  I’ll still have a bunch of opportunities to hopefully run across them this year though.

The rest of the outside stretch was pretty quiet. They had a big TV set up playing videos, but that was about it. The Incredibles were out again. The turn into Epcot was just as awesome as the day before, even with all the rain. I stopped in France to pick up two new characters….Remy and Emile from Ratatouille. 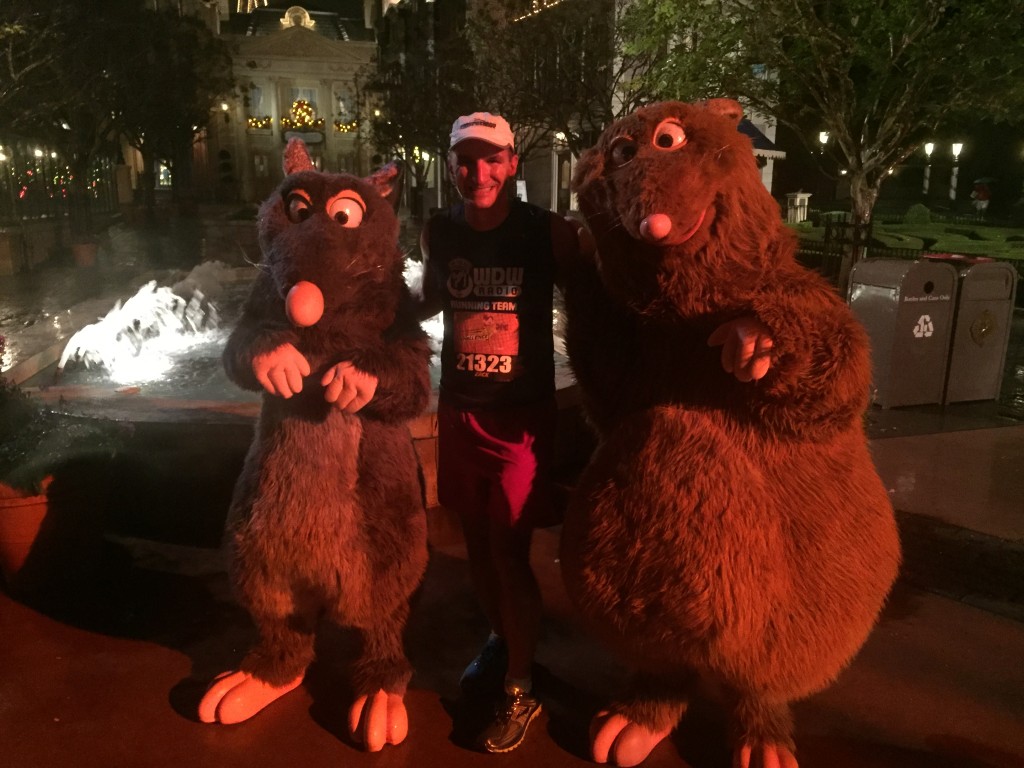 At this point it was raining pretty good again, but I was over half way done. We looped around and headed out to the boardwalk. I knew Lou was at the bakery, so I was going to stop and get a picture with the WDW Radio cheer group. Right before I got there I found Mike from Monsters University tucked away in the corner! We had met Sully in his Monsters U outfit but I didnt even know a Mike existed from the movie. He even had braces on, which I though was pretty funny. 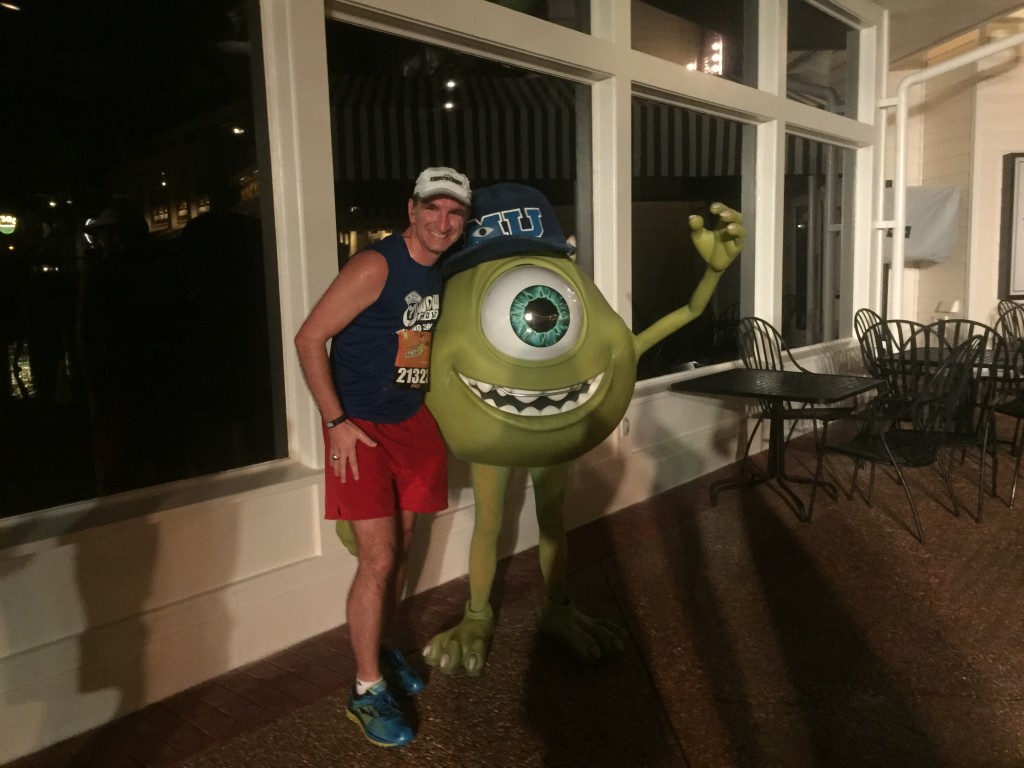 I then found Lou and the gang not far up ahead. As I was getting my picture with them, Pattie from the running team came trucking by. I caught back up to her and we ran together for a little bit. I really enjoyed it and it just goes to show how much a running team can add value to your races. We had never met before that point, but it was like I was running with an old friend. We ended up connecting several times throughout the weekend and I bumped into her on the course at the other races during the weekend. 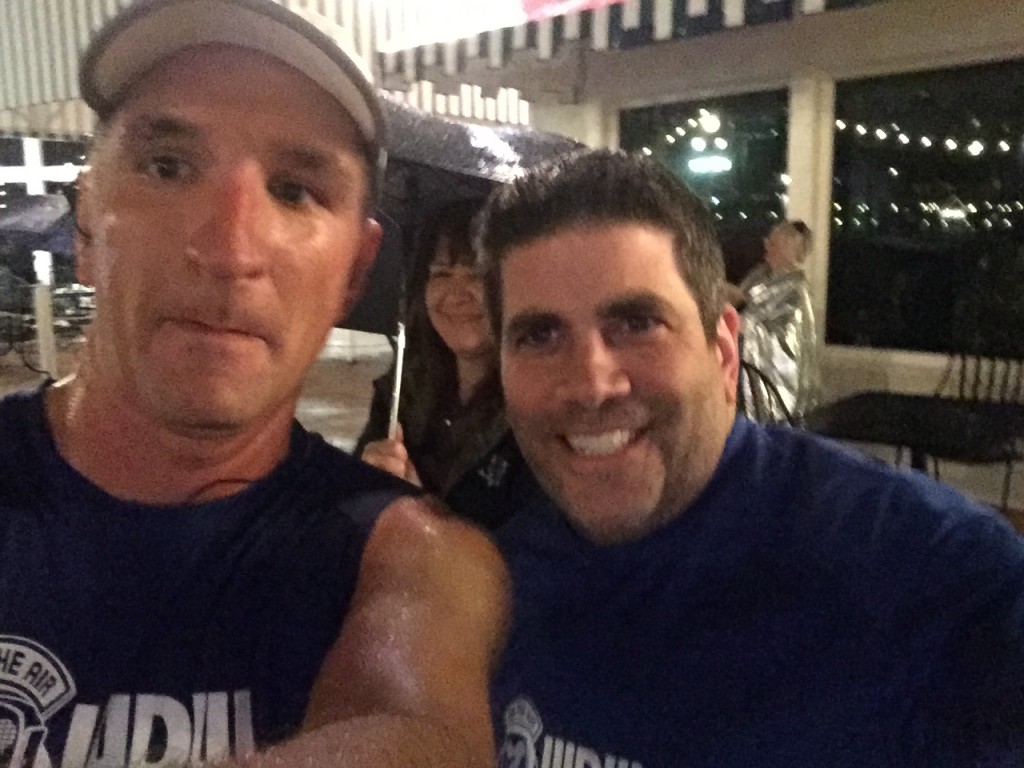 It was so wet, I couldn’t get my phone to work right!

I let Patti continue on without me while I stopped at the Tweedles. I’d been hunting them down for a year and finally was able to meet them a couple of months ago. I wasn’t going to miss my chance to get a picture with them that morning. At that point all that was left was just to push on through to the finish. I again finished a little faster than I wanted to, but it was nice to get out of the rain. 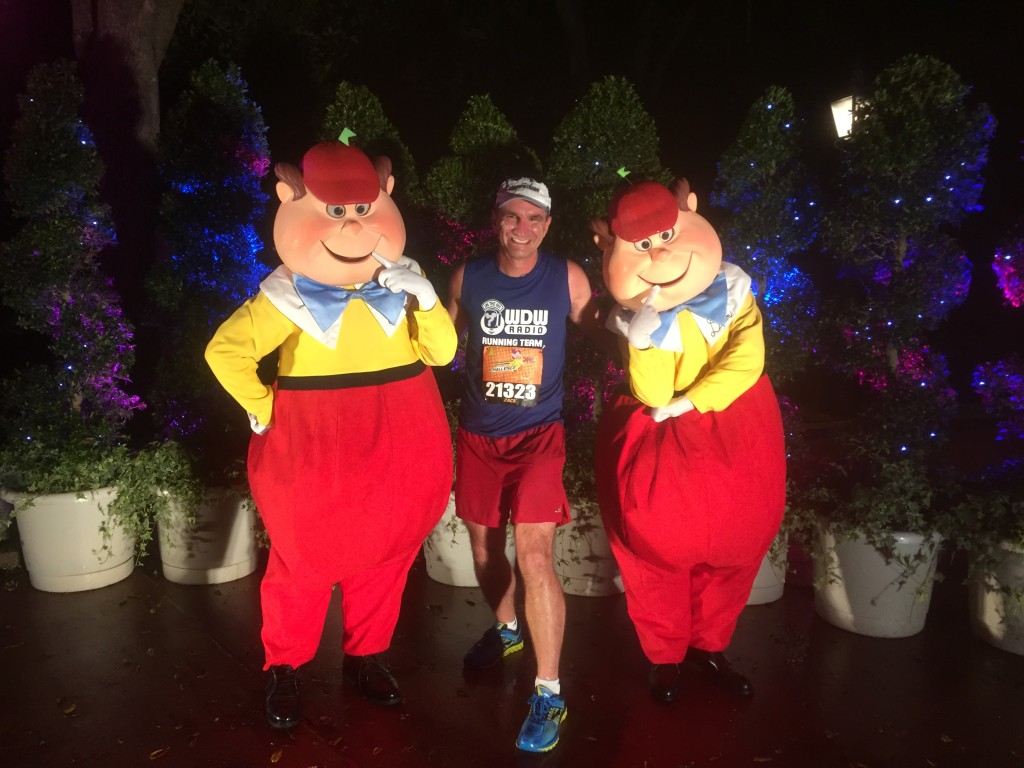 Since I was part of the Runners World Challenge, I got to have breakfast again with the crew. It was nice to get a hot breakfast in the heated tent! Two down. Two to go! Check back in tomorrow for the half marathon recap. 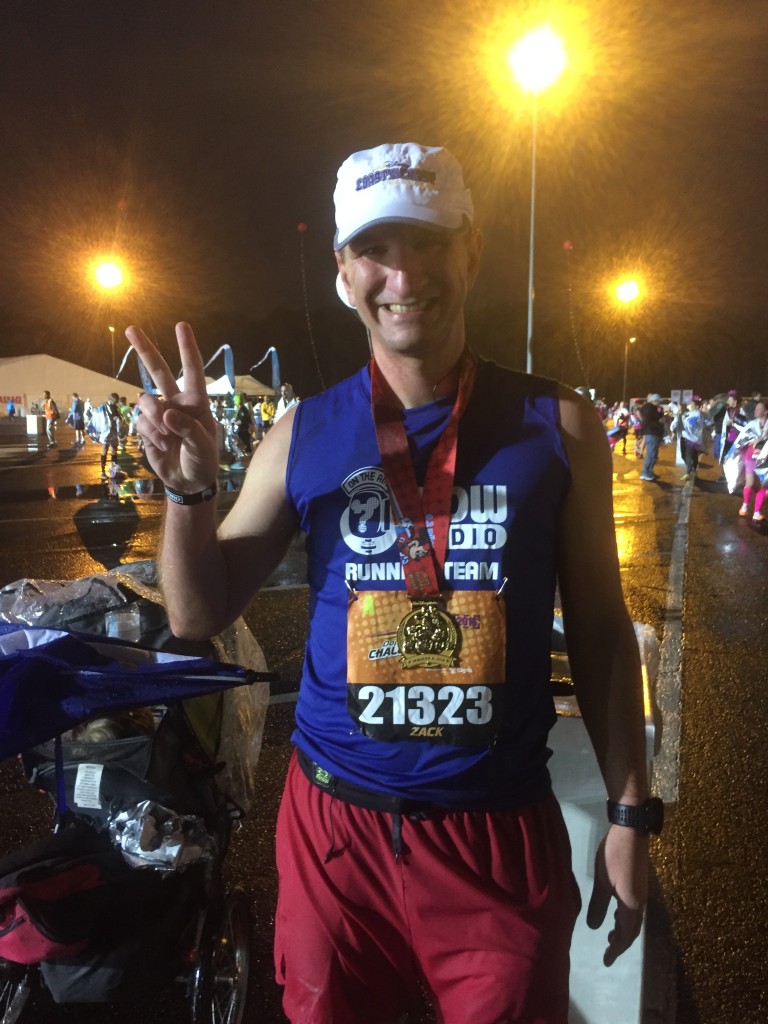