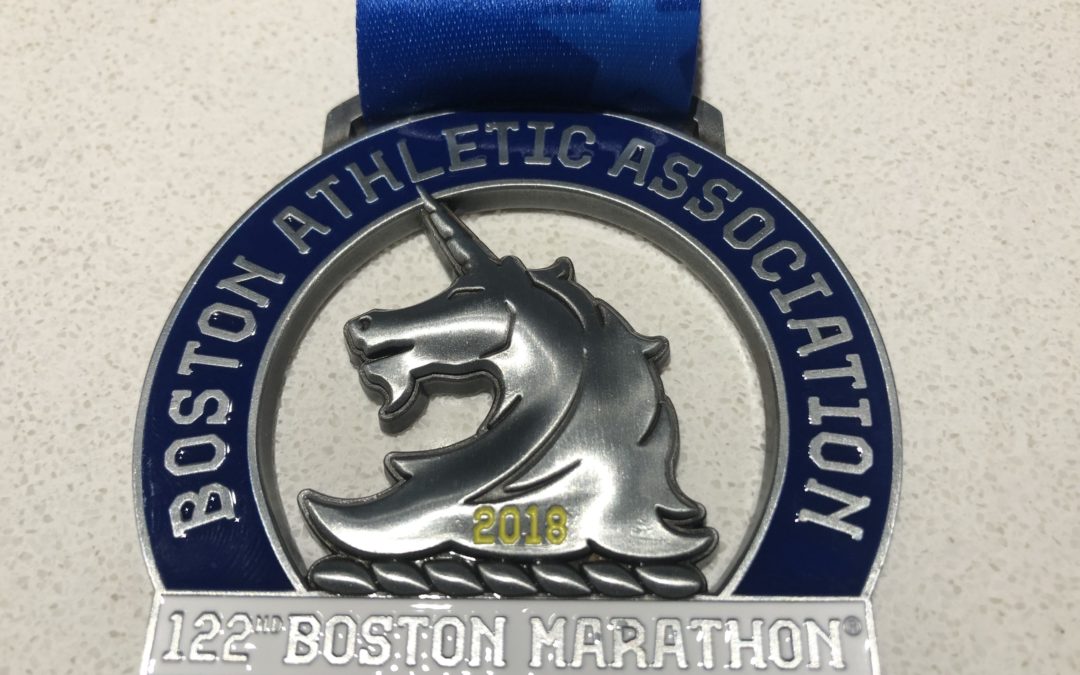 The Boston Marathon (Tough Ruck) was a culmination of many different parts of challenging myself over the years. In 2013 I participated in several GoRuck events. They are basically 8-12 hr events that are put on by special forces personnel that challenge and teach teamwork elements. You carry a 30ld ruck the whole time while marching, carrying other additional heavy objects and working on scenarios set by the cadre. In 2016, I did what I never thought I could do. I ran a marathon.

The Boston Marathon is the diamond in the crown of racing. Most serious runners have the dream of someday running in that race. The problem is that its a lottery based on running times. You have to be stupid fast just to even have a chance of getting in and there is still no guarantee then. When researching the race I discovered Tough Ruck. Simply put, it’s the military division of Boston. The main difference is that you do the race with 30lbs or more strapped to your back the whole time. it checked all my boxes: Boston, an extra challenge, and hanging out with fellow vets. Also, there was no time limit requirement to sign up. If you are brave/dumb enough to do it, then you are welcome to come. It was even recently opened to civilians to participate as well. They open 1000 slots a year starting on Veterans Day.

I had signed up for both the Dopey Challenge (5K, 10K, Half, Full Marathon) and the Ultimate Peach Challenge (10K, 10 miler, Half, Full Marathon) this last year. If there was ever a time that I was going to be ready for this challenge, it would be this year. I began prep by rucking around Atlanta. My wife and also toured several metal shops around the north end of town looking of the perfect piece of steel to serve as the weight for the event. We eventually found a blackened piece of scrap stilling in a junk pile. It was difficult to bring it back to life and figure out how to paint it without rusting it, but it was always very rewarding on a personal level. I chose to paint mine with the 39th Infantry Brigade logo.  It was the last unit that I served with. 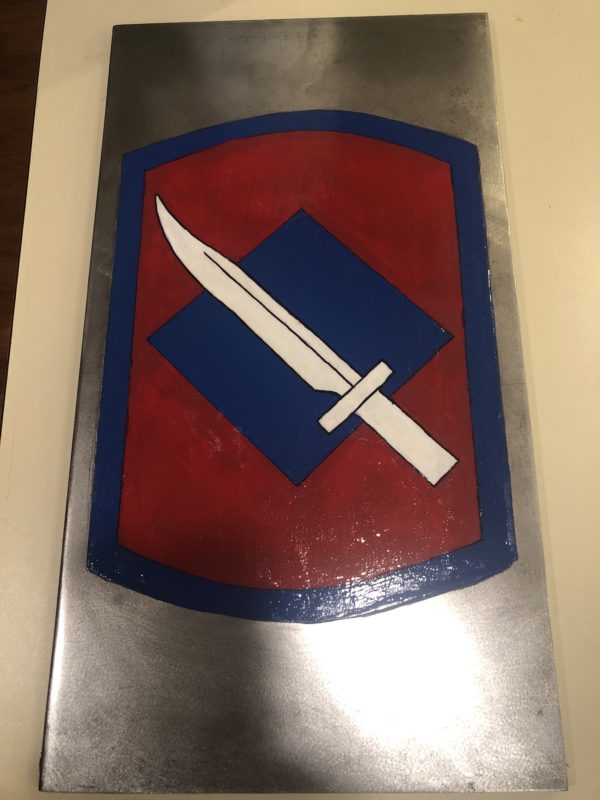 I had never been to the Boston area before, so I took a few days to see the sights and explore the area. I ventured down to Connecticut, Rhode Island and settled in at Plymouth Rock. It was quite a different experience from what I am used to, but I loved every place I visited. The waitress at a local place made sure I had my first clam chowder. (It was great!)  I The next day I made back into Boston and walked the Freedom Trail, visited the Boston Marathon store and saw the team repainting the finish line.  I absolutely fell in love with the city and can’t wait to come back in the future. 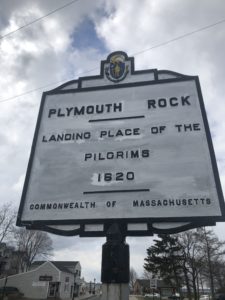 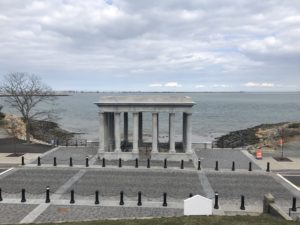 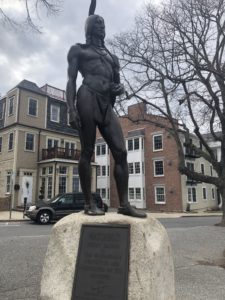 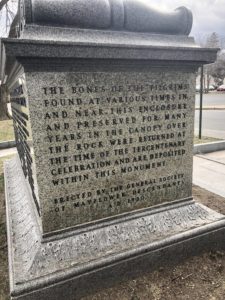 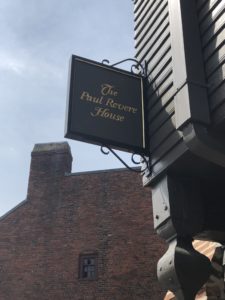 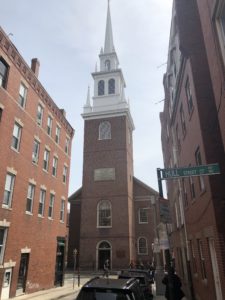 Where the two lamps were lit. 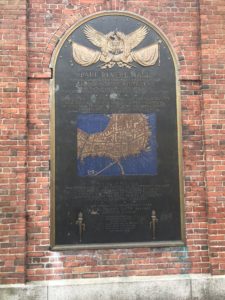 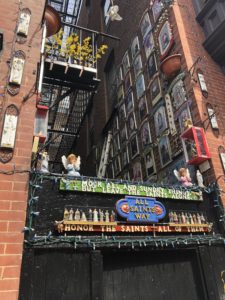 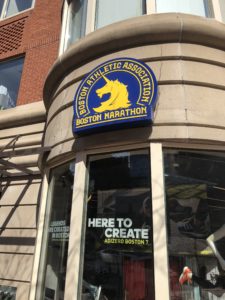 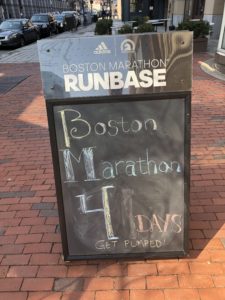 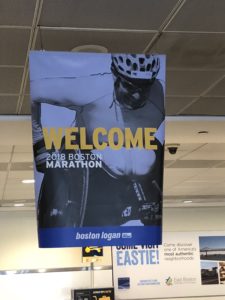 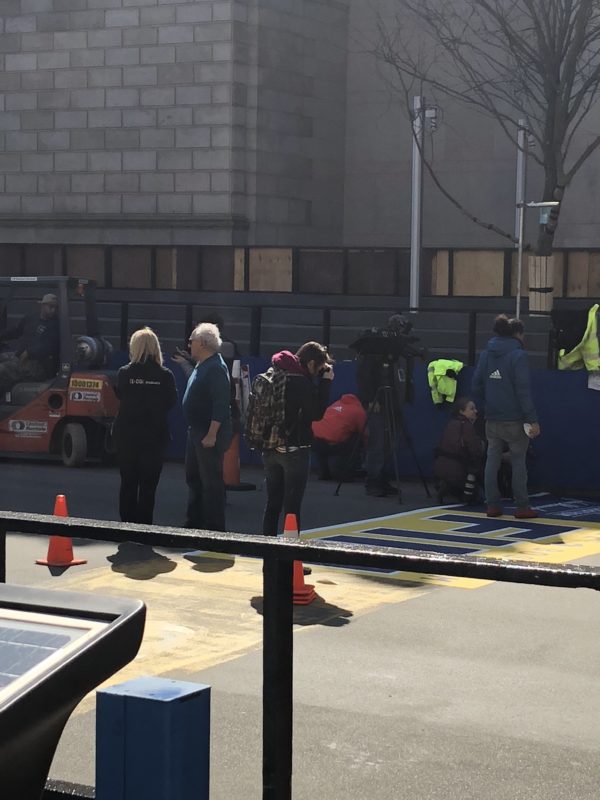 The expo was not quite what I expected. I think it was smaller than what I was expecting. They still had some crazy displays and exclusive merch at many of the vendors. I picked up the finishers jacket, 2 pairs of the shoes, some new Oofos, a magnet and some socks. I did enjoy riding the train into and out of town. Probably weird for a local, but it made me feel more connected to the city. 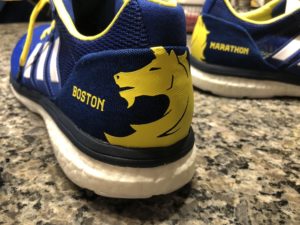 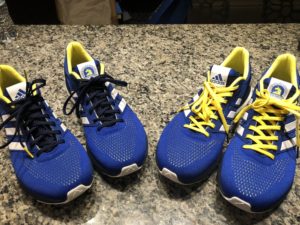 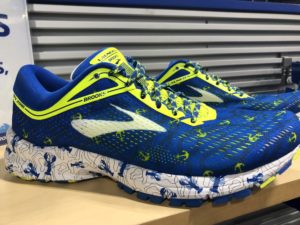 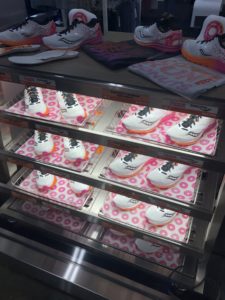 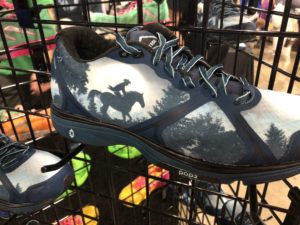 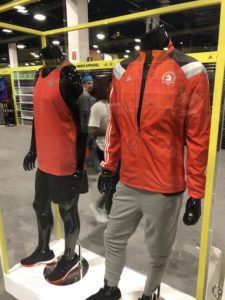 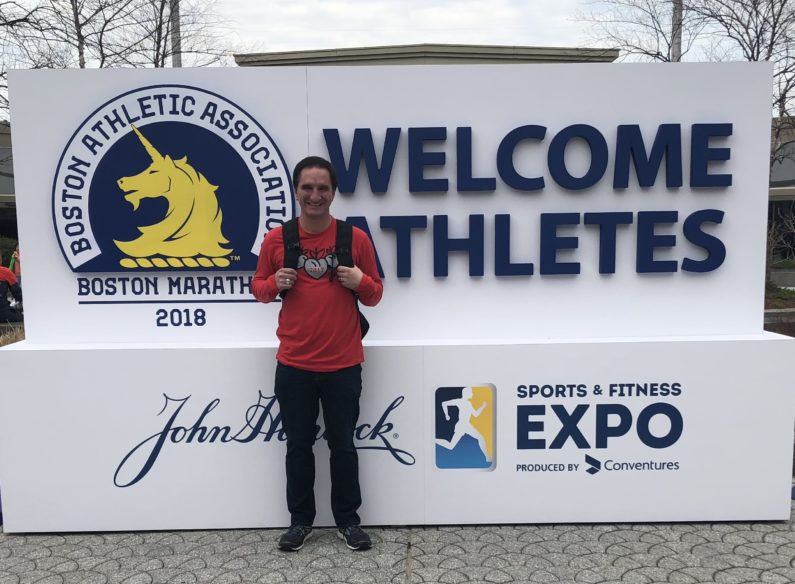 The night before the event of a bunch of the participants and the committee team had dinner together. I sat with the committee and it was a great time learning how the event kicked off and grew and the stories that have happened over the years as well. We also got see a live stream of a unit in Kuwait who were doing the challenge live at their base. We then broadcast ours to them the next day. It was a special surprise to see and be a part of that. Another special piece is that we were each asked to carry the names of fallen heroes on our pack to honor and remember them. I picked up a few as well as carried some names of those from our running team back home.

Tough Ruck is now run two days before the regular version. There are a couple of reasons why. First, you can imagine after the bombing several years ago that it might alarm the massive amount of spectators to see a guy running down the street with a heavy backpack following the other runners. It keeps them and us safe. The second reason is the security issue. The main race already has a heavy amount of security and we would only add to that burden. That’s not to say we didn’t have security checks. Each of our packs were checked multiple times by dogs and also by military personnel. They were also weighed before and after the race to make sure you didn’t drop weight along the course. 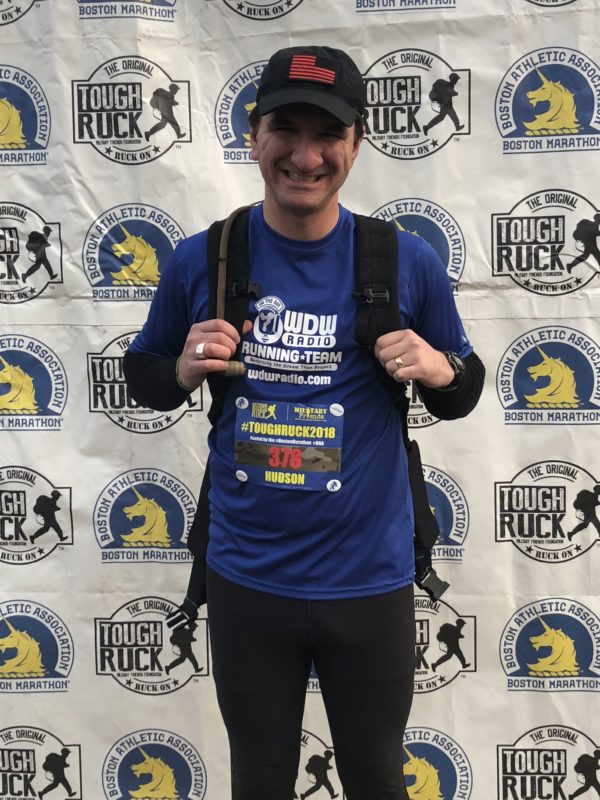 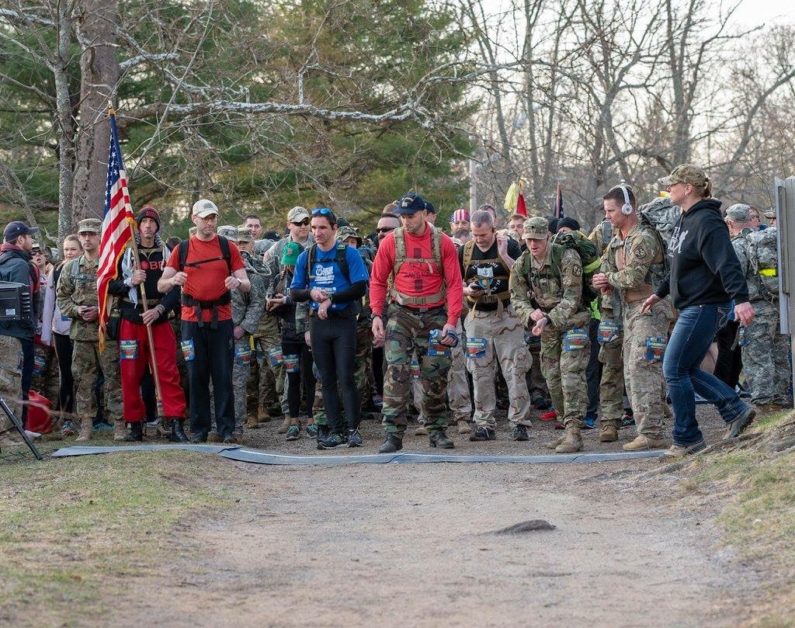 I wanted to do well, but I was a little bit nervous. I had an awful marathon (GA Marathon) less than a month earlier and that was without the weight. I had a run walk strategy and I would stick to the strategy that Barb Galloway gave me before the race. “Use the run-walk method. Don’t start out too fast and then pass them later in the race.” I had the Galloway timer and it was the first time that I was using in the race. When I told the committee what my target time was I think they thought I was crazy. I was going to give it my all and try not to fall too far behind. 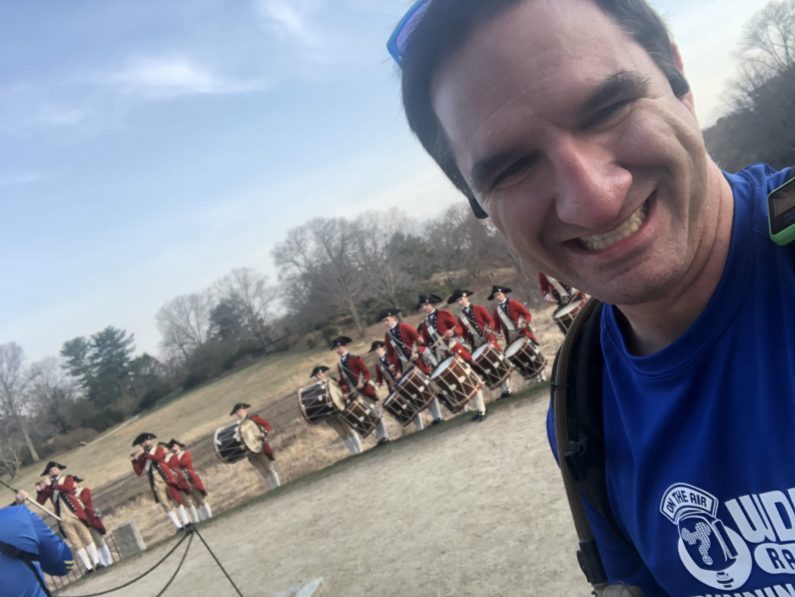 The course was along the area of the first battle in the Revolutionary War. It was also the anniversary of the event and every year they re-enact the battle. By re-enact, I mean fully re-enact the whole day. I ran into these redcoats practicing for the battle just as they would throughout the day. During the morning, families and kids were out doing chores just as they did back then. It was like taking a time machine back. It was early enough that there weren’t a bunch of spectators out yet. I was sitting at about 35th place so there weren’t really any other people out there at the time. 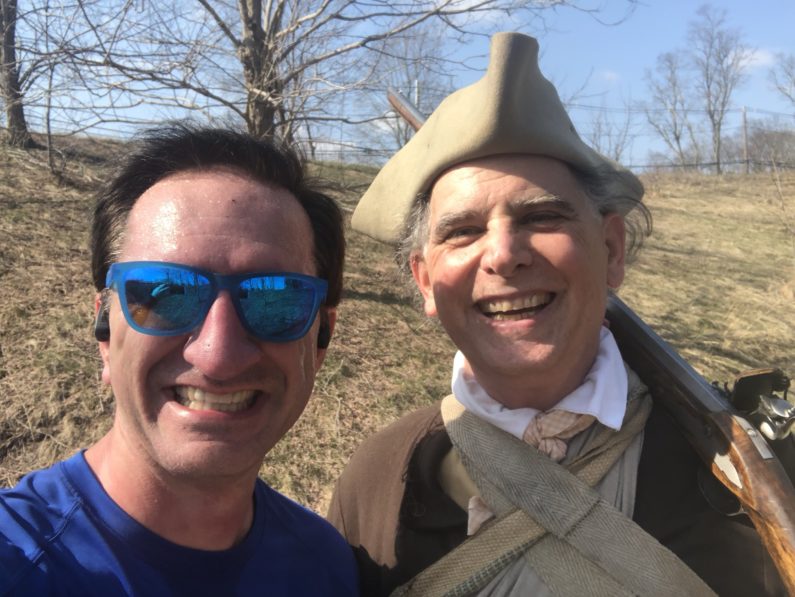 A few hours in, I start noticing a lot more redcoats showing up along the route and the families have disappeared. This part of the course is an out and back twice meaning that I got to see the same scenarios four times as they changed throughout the day. I would also run into some of the committee members who were surprised, excited and encouraging that I was hanging with the front pack. It was getting serious on my third time through. I nearly got hit by a 7 ft tall horse with the soldier asking me what I was running from! 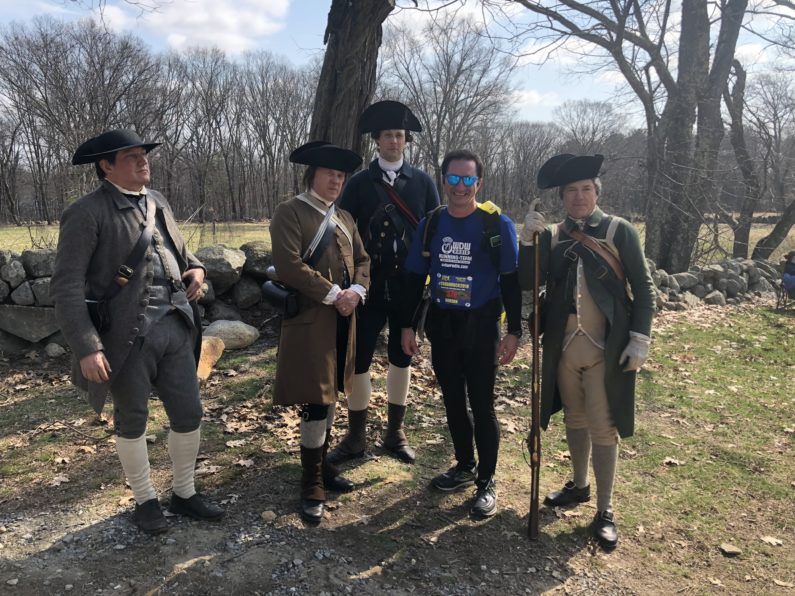 I finally stopped at the bathroom and lost my count on my ranking. I was 29th going in, but at least passed me while I was in there. The last segment was crazy. I was worn out, so I called a couple of friends to talk to get my mind off of the pain. I had a ton of people text and leave messages which were very encouraging as well. By the time I was coming through the area for the last time, it was a full-on battle. I was getting shot at, cannons were going off and there were people everywhere! Once I left the park it was still a few miles back to the finish through the town. There were no mile markers so I didn’t know how far to go or my ranking still. I was passing people but each pass was a battle. It was competitive so no one wanted to let anyone else pass them. I know that was true for me. I had a person that came up on me and I went from run-walk to just run to put some distance on them.

I was mentally exhausted at the end. I fell for the “You’re almost there!” cheer when in fact I was not. It was just me in the last mile. There were people behind me but not close enough to be a threat and not a person in front of me. As I began to crest the last hill I saw a vet to had lost both of his legs in combat cheering me own. That nearly brought me to tears (and still does as I’m writing this) He gave me the last boost of energy I needed to make it to the finish.  I found out I finished 22nd overall at the race. That was a great feeling! 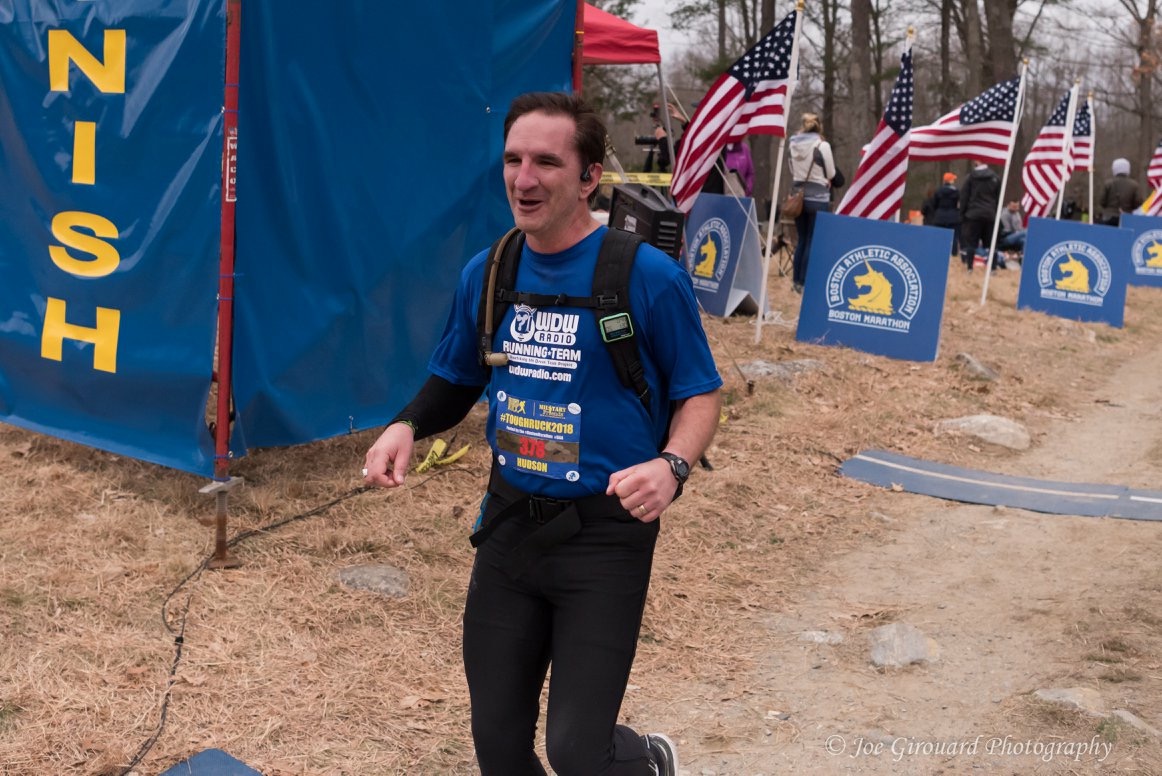 They also had a great post-race experience. Free massages, a full hot meal, free ice cream and all kind of swag.

If you are up to the challenge, I would highly recommend doing this event. It’s a very rewarding experience! 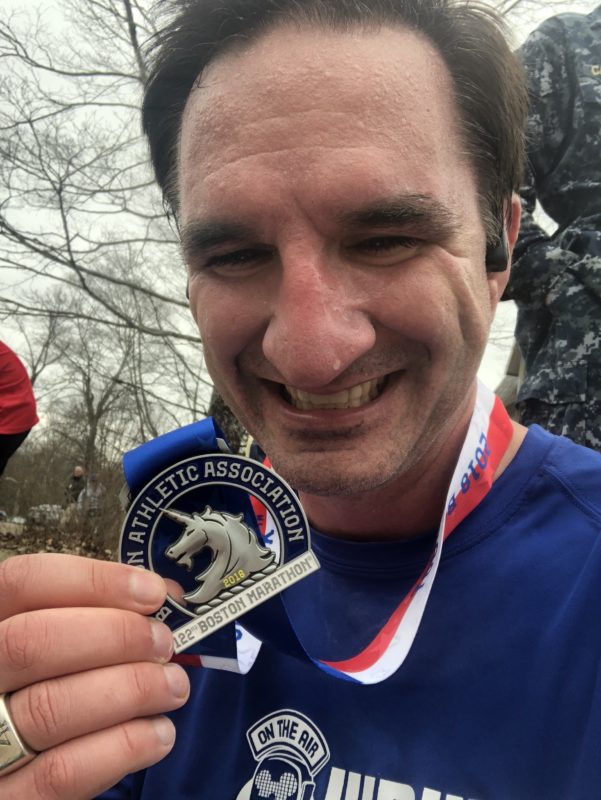 Up next Star Wars Half Marathon Weekend!