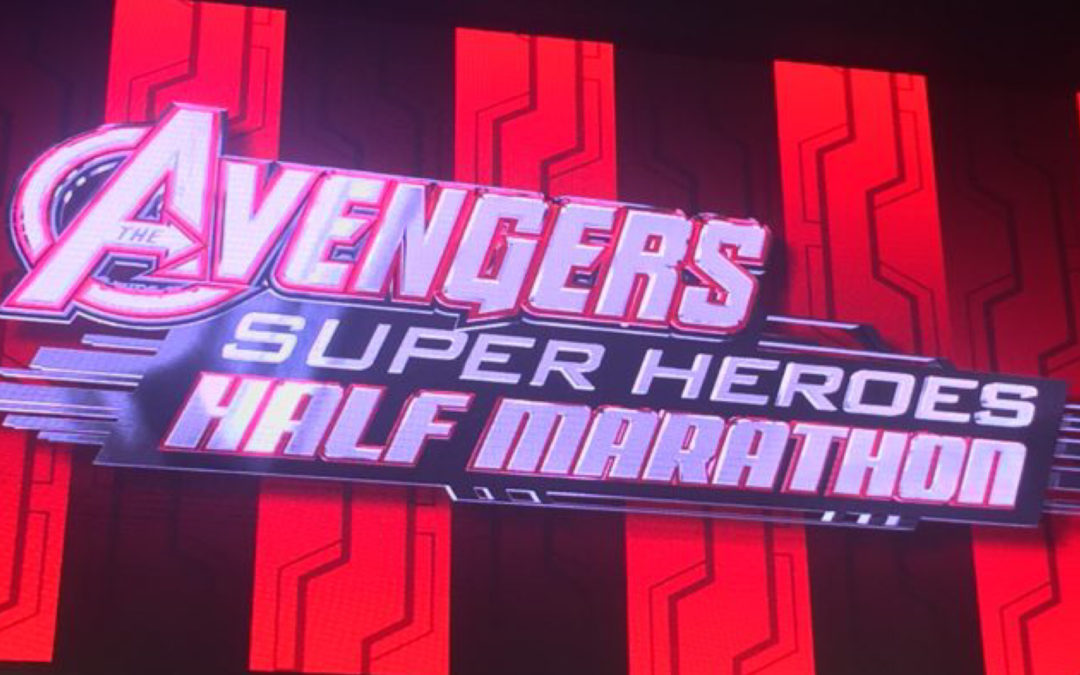 The time has come.

It’s been a long time coming, a 4-year plan of saving and training since 2014 to reach this moment. I was excited and a little sad that this crazy journey was going to end today. I have found that when you get really deep in any subculture, it’s difficult to just quit and get out of. While not leaving Disney running any time soon, I will be stepping back from the “full time” aspect of it. It has consumed my life for 18 months and it was time to let it go.

The morning of the race was pretty much par for the course. The weather was great, slightly cool with a light breeze.  I meet with the running team and then headed off to the corral. The Galloways and I had talked about finishing out the West Coast races together, but I could not for the life of me find them in the corral with me.  In the final moments, I gave in to the idea that this was going to be a solo race and tried to quickly plan out my new strategy for the race: run fast and see what happens. 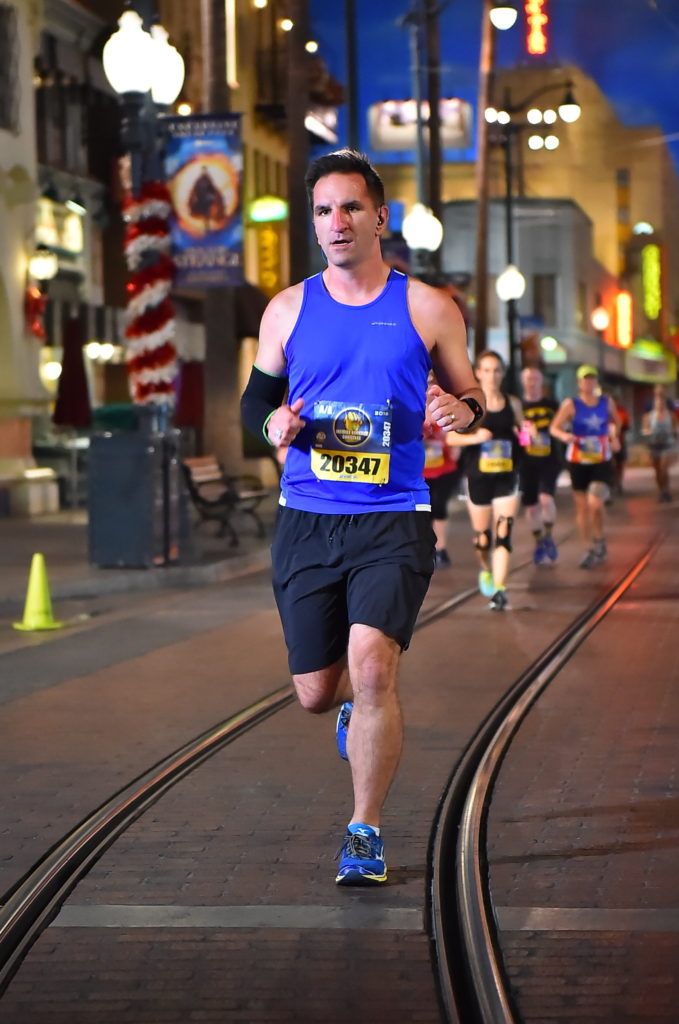 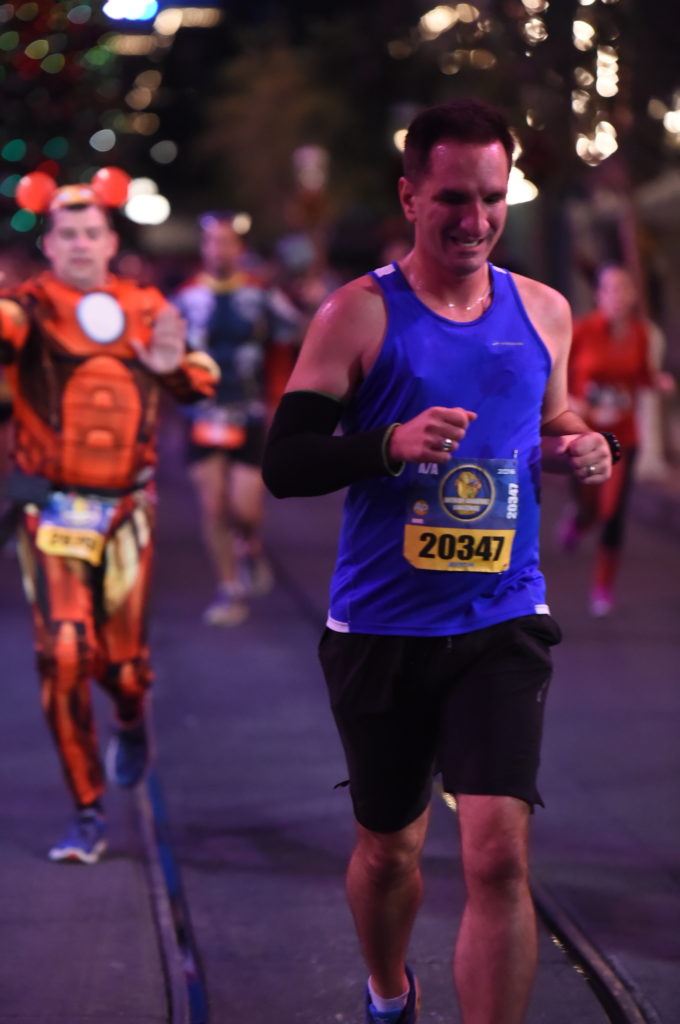 I figured I would pick up the characters again and have some fun. If nothing else it would give me a break to rest for a minute. 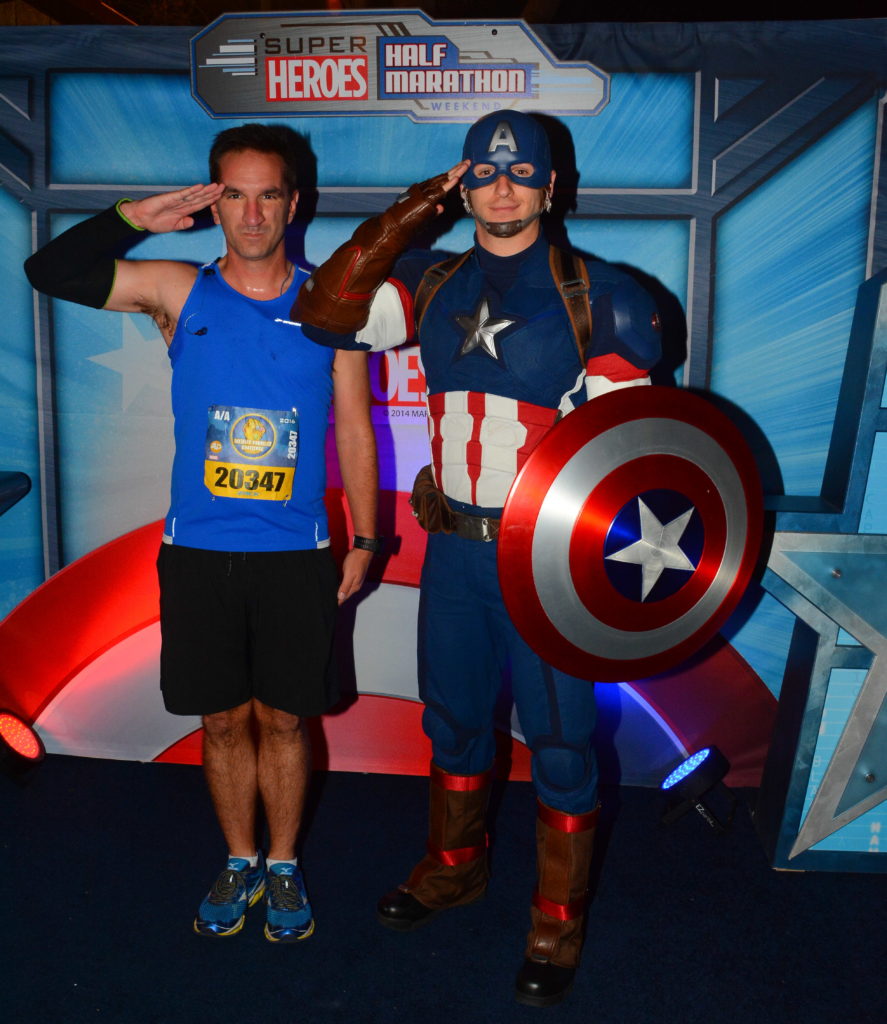 An unusual thing was happening at the character stops, lines were forming deep and early. It’s usually not the case when I come through because the people are more focused on running the course than stopping for pictures.  I waited several minutes for Thor and then after my picture, as if by divine appointment, there are the Galloways! Relief and happiness swept over me. I now knew I wasn’t going to try to kill myself on this race and that I would get to enjoy it with others. 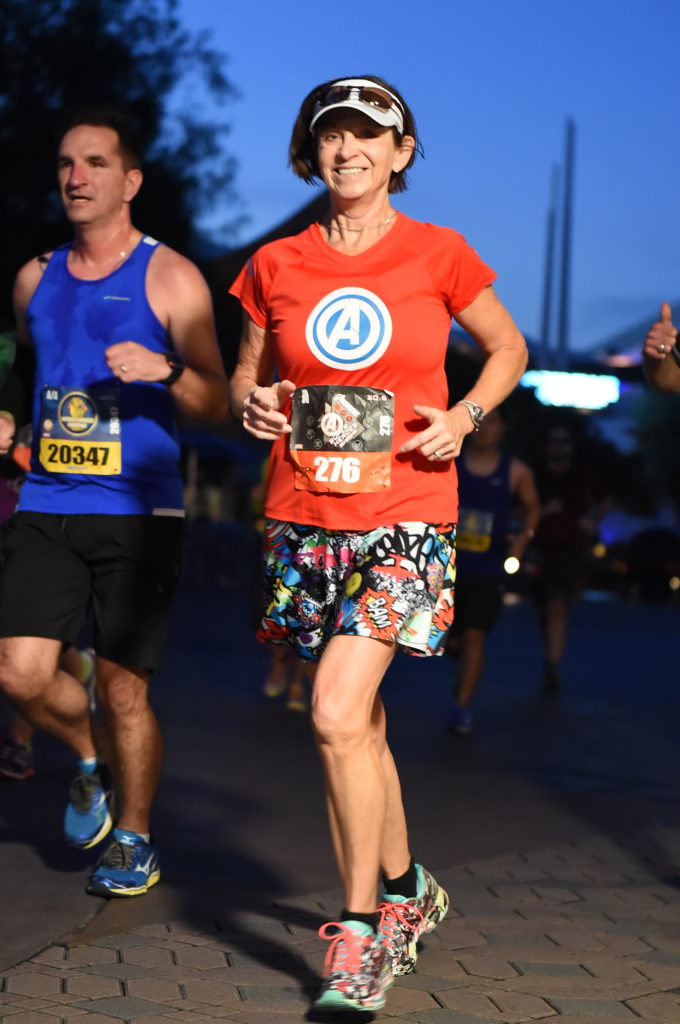 It was fun running through the parks together and then we headed out east on the newly drawn course. Our destination was pretty much straight to Angel Stadium and then back to the resorts.  This was my favorite route so far out here. There weren’t a bunch of turns back and forth and only one bridge that I can remember us going over.

The time out in the city went by really quickly. We enjoyed the pockets of supporters on the way to the stadium and shared a bunch of stories with each other along the way. I had been give a side mission while out in the city. 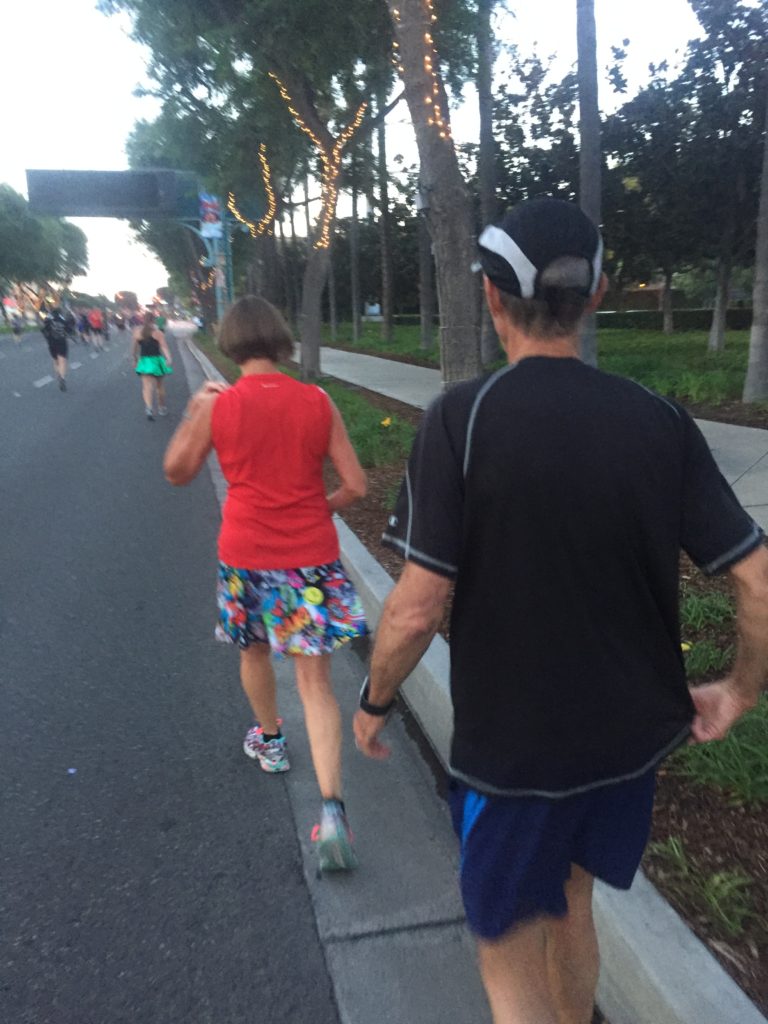 A friend from Alabama had some friends she made online in the cosplay community and they were going to be out on the course somewhere cheering us on. I was sent a picture of them and was told they were going to dress up from the first Captain America movie. It was going to be a challenge, but I would give it a good try to locate them.  7 miles in and nothing so far. 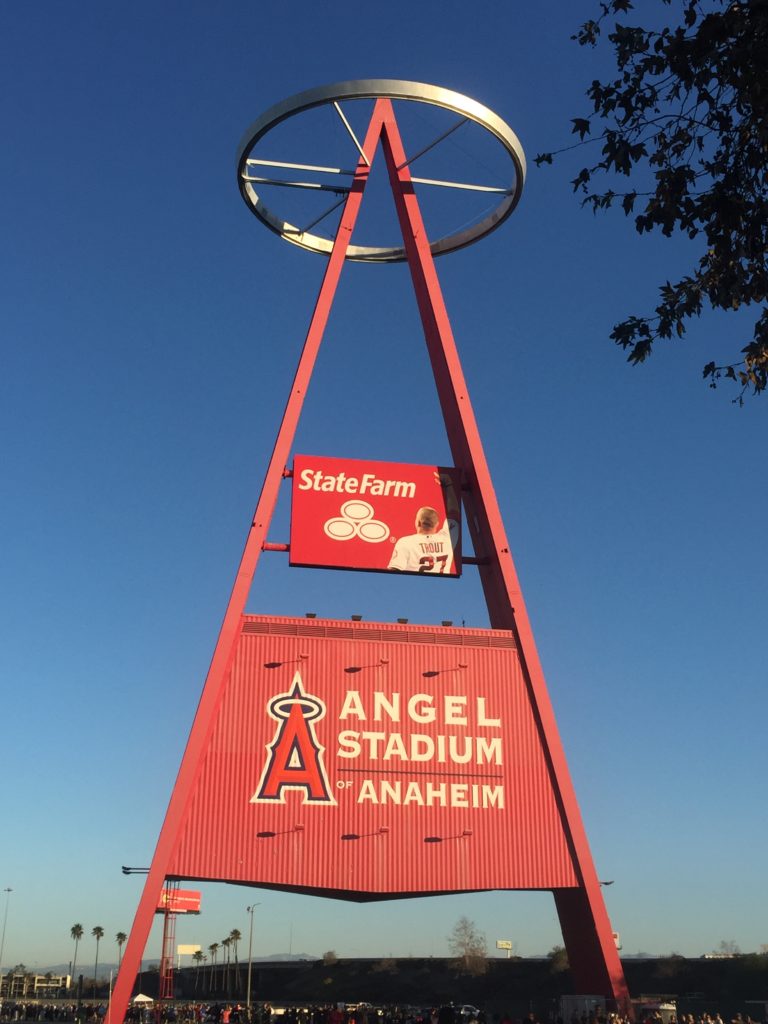 We made it the stadium and there were a ton of World War I and II reenactors cheering us in to the stadium. They had even built a little dance floor and were having period accurate dances together! The Galloway group was also there and it was fun interacting with them for a moment. 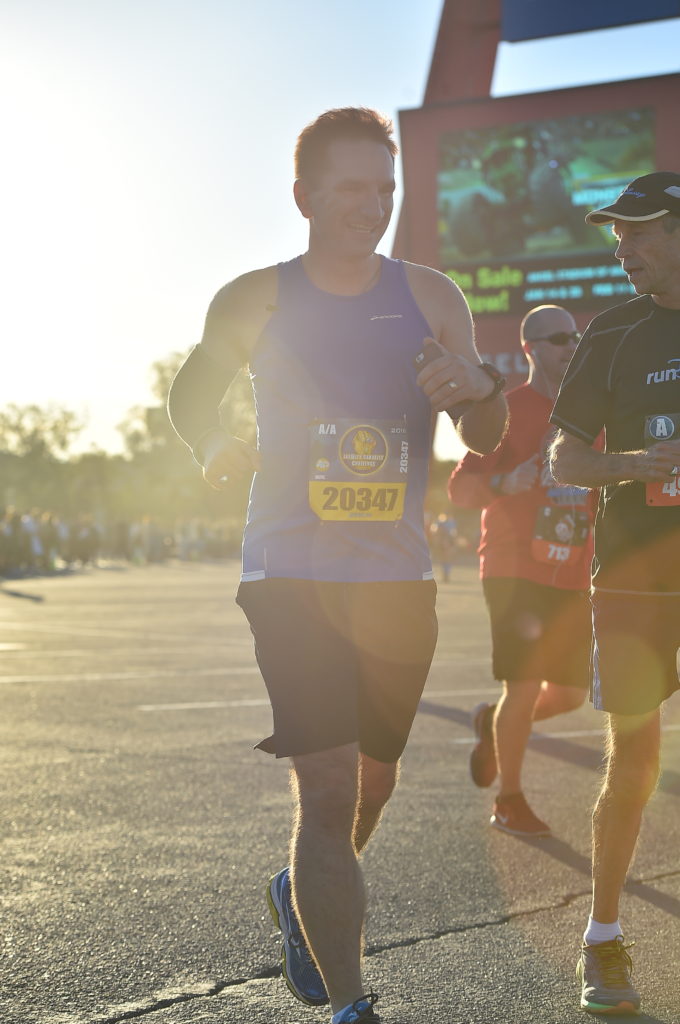 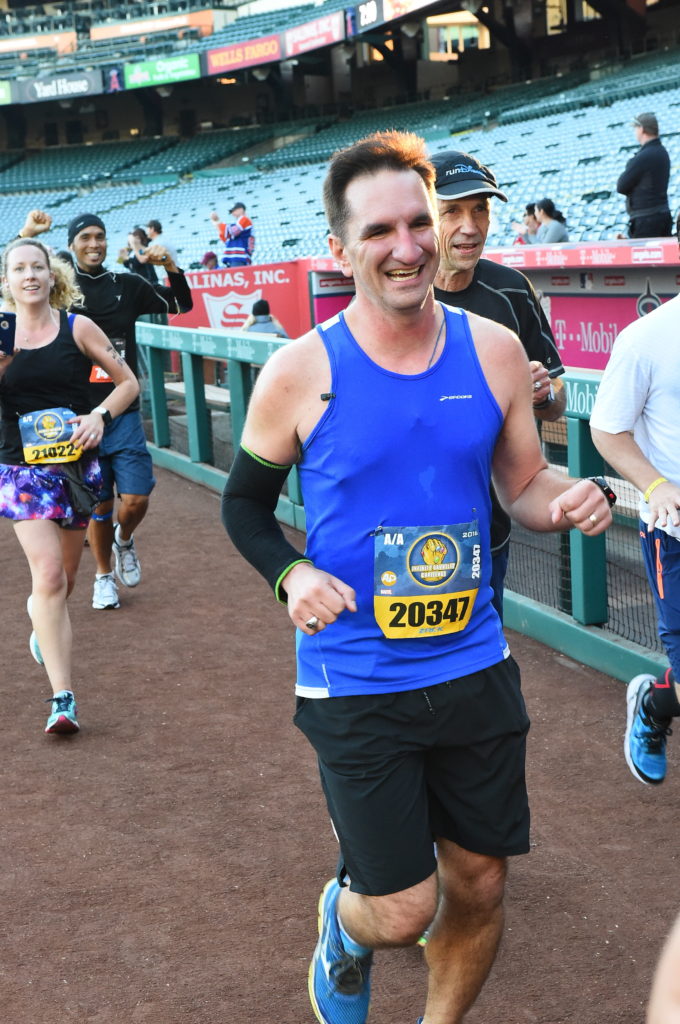 Running the stadium again was really fun. There weren’t nearly as many people inside as there were at the Disneyland Half, but there also wasn’t as big of a lead up into the stadium last time as there was this time.  We took the corner out of the stadium and and started heading back to the parks.

Recently I wrote on my own site about some life lessons learned while doing Disney Races. (Check it out here) One of those points was to stay humble. I do get recognized from time to time as the Disney Runner, or from the WDW Radio group or just that guy that’s at all the races. When I run with the Galloways, zero people care about me. Jeff gets stopped a bunch for pictures and running selfies.  He’s a great sport about it and never says no to a person.  Barb and I will keep going and he’ll catch up to us.  Running with them keeps you humble for sure.

We run into this crazy group of Marvel cosplayers on the backside of the stadium and I’m sure if I haven’t already missed the people I’m looking for then this was going to be my shot. After combing through some Deadpools and Wolverines, I find Steven and Millie! I was so excited to find them….and they were just as excited to find me. I stopped and got some pictures with them before heading on. You know what? They didn’t know who I was running with, they were just happy to see me. It was a highlight of the race for me. (And that’s the power of the internet.) 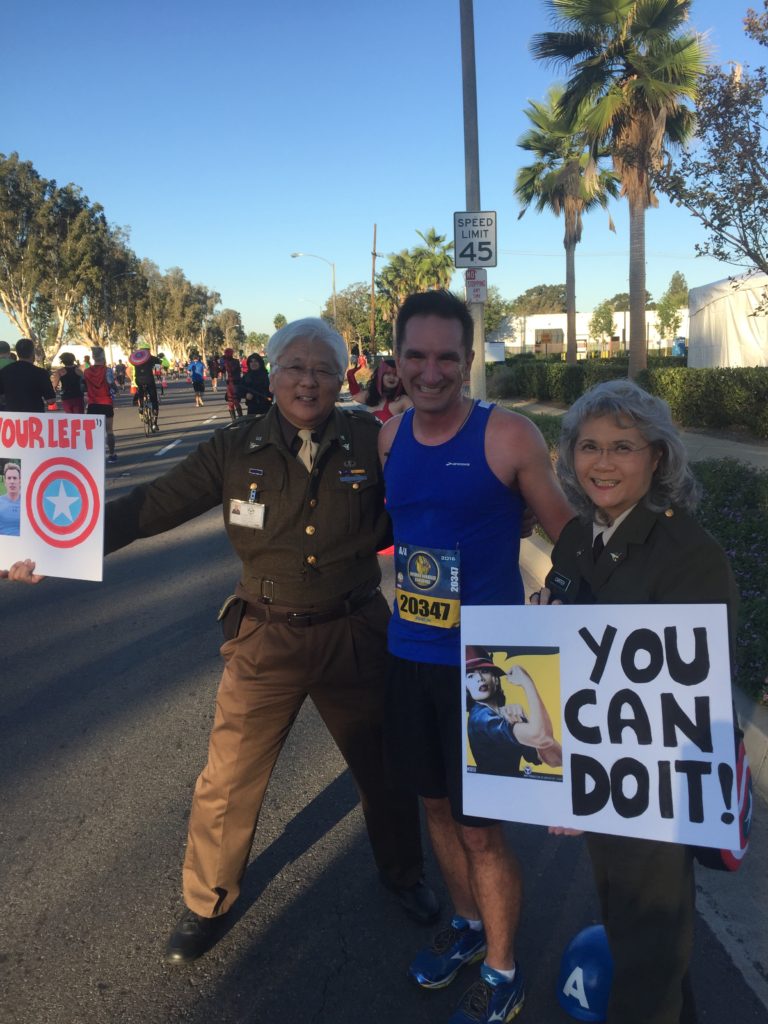 I caught back up to the Galloways and it was off to the finish. A 5k was all that was left.  There were a bunch of bands and cheer groups along the last stretch before returning to the parks. This is typical for these races, but it’s always a welcomed boost right when you need it.

Once we were back in the parks, I could feel myself getting sentimental as we were closing in on the finish. I shared some of that with the Galloways and we had a nice moment heading in to the final stretch.  Sharon couldn’t make it out West, so I was thankful that I was about to share this moment with them as we crossed the line together.

We decide to finish strong into the last straightaway and to the finish. I turn on the hype machine and start trying to get the crowd going as we enter the finish area. Carissa was announcing then and gave us all shout outs as we approached. Jeff leaned into the announcing booth and then Carissa recognized me for all the races this year. 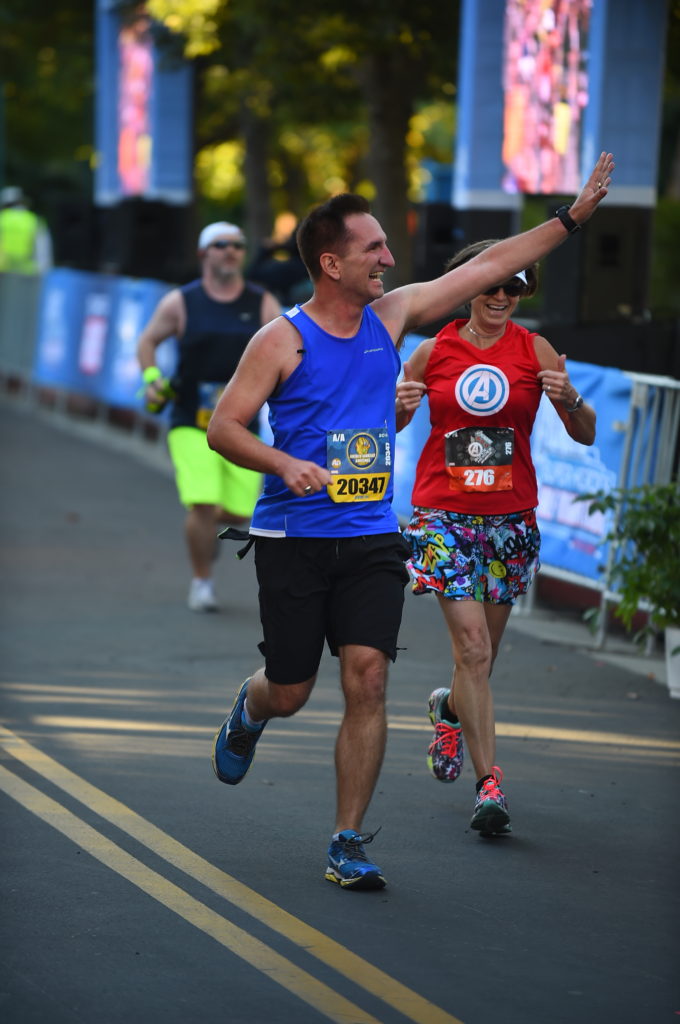 I cried a little at the finish.

It was an emotional thing to realize the moment you had been thinking about and planning for, for so long. 195.3 miles of Disney races. 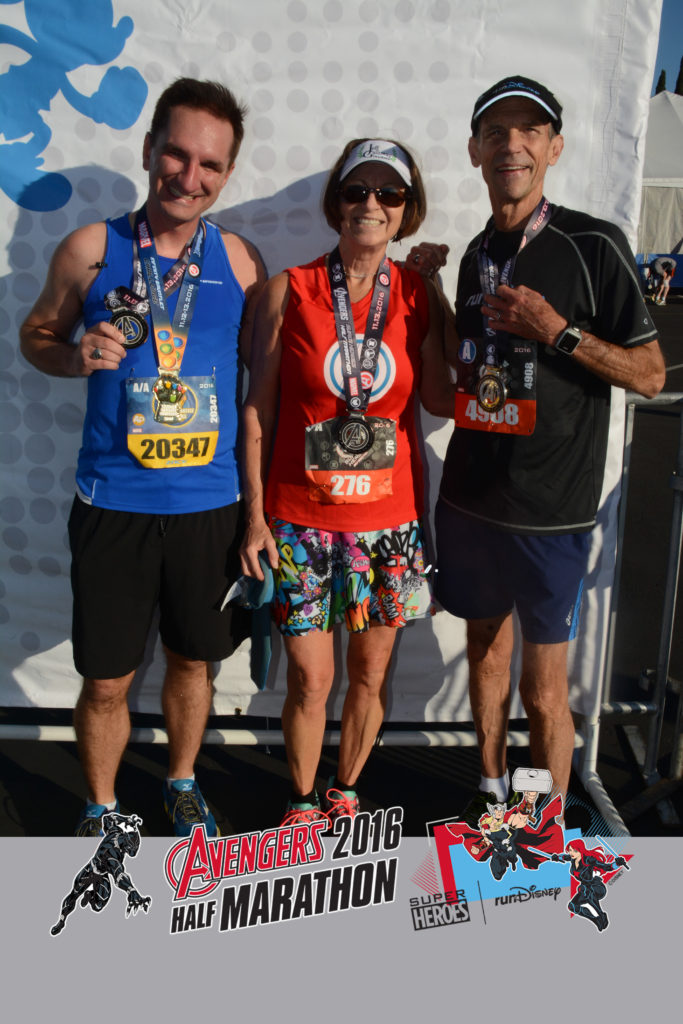 We took our finisher pictures said our good-byes (We’ll see each other later this month at their races held in Atlanta) and I proceeded to my treat-yourself area: The massage tent. Now Luke makes fun of me because It seems like I never get the nice ladies. This time was no different. I was man handled by two very large men at the same time. I also went and hung out for a few minutes at the annual pass retreat. They had a gift bag of a full set of the cokes today!

I then went back to my room, got cleaned up and went to go take my ultimate bling photo. I had lugged every medal out to California to get this picture. It was an interesting time going through security at the airport! 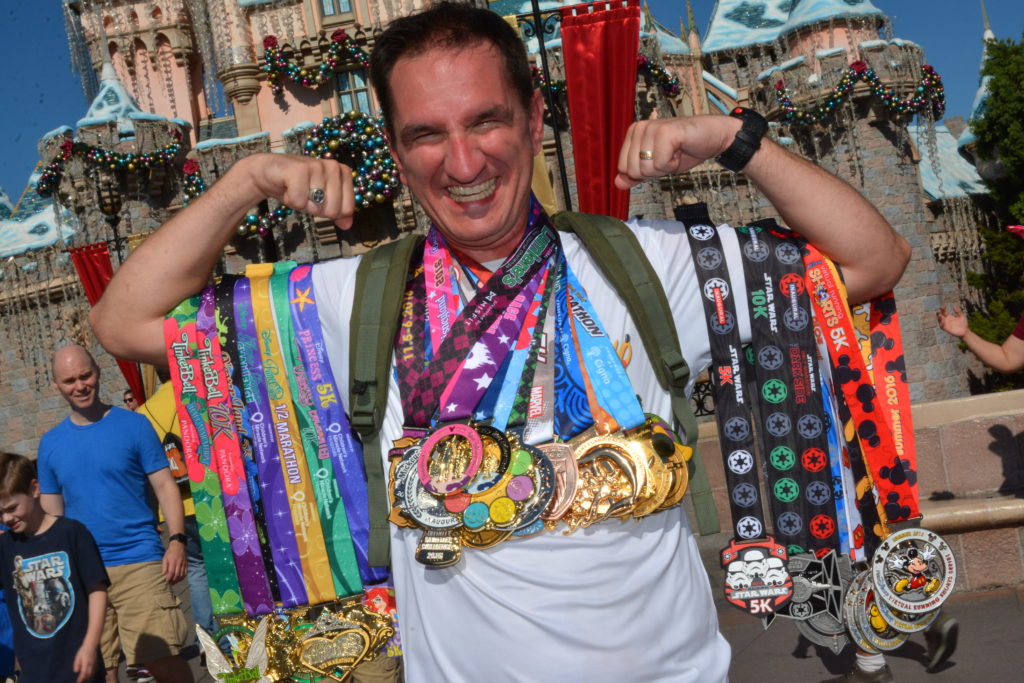 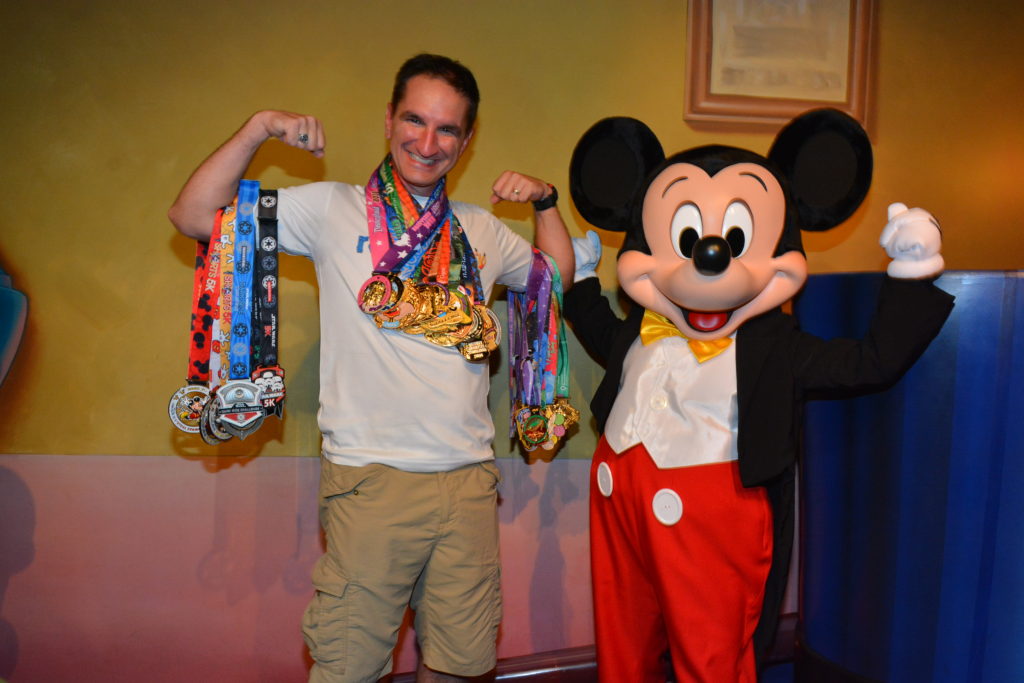 Looking back, the finish was amazing, but the journey was where the true magic was. I’ve made many long term friendships this year, heard so many inspiring stories and got to experience so many incredible things that I did not anticipate.

Thank you to my wife Sharon for supporting me this year and half.

Thank you to my running team for your love and friendship.

Thank you to all of you in the online world who have sent me words of encouragement.

It’s off to the next challenge.